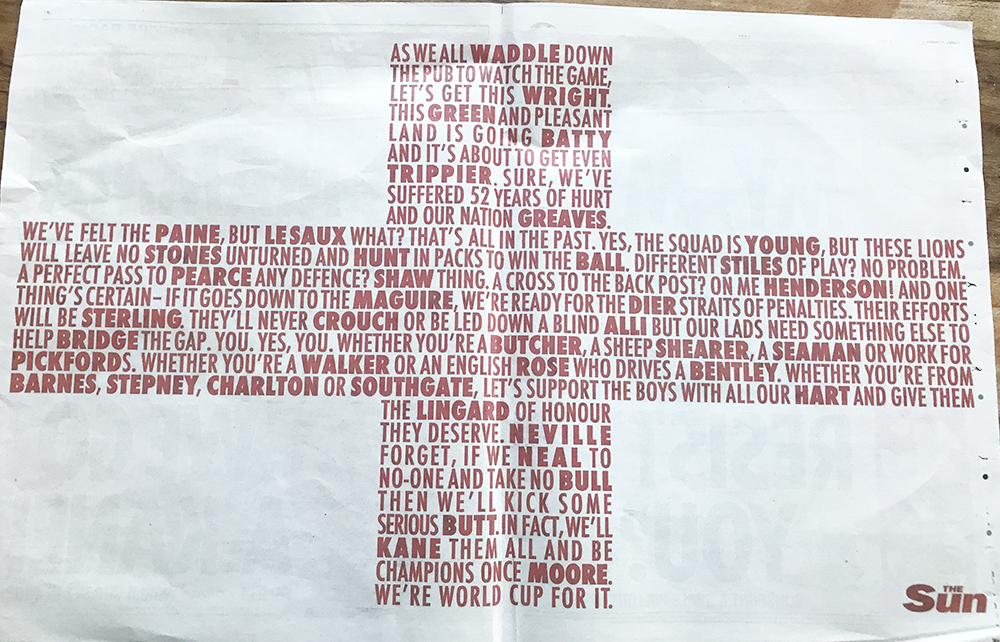 Satirical Snapshots Bringing You Whimsy And World Cup On A Wednesday!

Look, you know how I am about themes and it just so happens that the semi-final between England and Croatia falls on a Wednesday. Today.  At 7 pm.  And if we don’t win I’m going to be atrocious. But we will.  And then it’s the French in the final. I expect global positive energy from the lot of you tonight or we will be having words. The sort that needs soap to wash them away.

It has come to my attention that the small island of Jersey, south of England, sitting in the English Channel, has a problem.  In my opinion, it has a lot of problems as when I went on a short break with my mother there I found out.

Jersey is very beautiful and you can only live there if you’re a millionaire.  This often results in problems because very rich people sometimes don’t know how to deal with reality.  On my trip I witnessed the following things:

1:  They have the biggest Lavender Farm. I insisted on visiting it because I am a big fan of lavender and all its properties.

“Should we look up where it is?” my mother asked as we went to get in the car.

“We are on an island no bigger than a shoe with the worlds biggest lavender farm,” I scoffed. “I think we will be able to find it.”

No signs.  None.  Not until the point we were racing down a country road about to give up when I spotted a handmade wooden sign, four inches long, at a left-hand turn saying, “Lavender farm.”

“LEFT!”  I screamed as my mother swung the car into several doughnuts, took out a hedgerow and landed us safely in a field of purple.  I spent the next hour being treated with lavender balm for whiplash.

2: Listed in “MUST SEE” things to do in Jersey was something called the Shell Garden. Intrigued at what this might be I suggested we visit.  I nearly asked for my money back from the guy sitting in his deckchair outside his house who charged me to enter his garden. Decorated completely in shells.  And not in a good way.  The most prominent feature being four decorated shell graves for his lost dogs, Itsy, Bitsy, Teeny, and Weenie.  No, I didn’t make that up. You couldn’t. 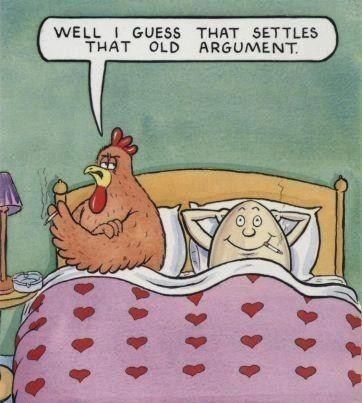 Turns out that Jersey is now overrun with feral chickens. Why? Jersey people have taken to having them as pets thinking it might be novel to have chickens and eggs and be all harmonious with nature.  But, when they start defecating everywhere and spoiling the garden the folks get rid of them by setting them free. This has resulted in more than one hundred feral chickens causing mayhem to the dwellers by wandering into the road, crowing at 3 am, and pecking at ornamental garden flowers. There are no foxes on the island so the situation is getting worse and causing major distress to the inhabitants. 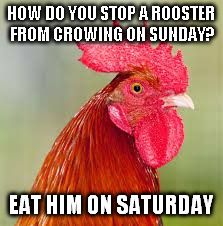 See, if you lived somewhere normal this problem would be seen as a gift.  There are a hundred Sunday dinners running around, a ton of scrambled egg and maybe somebody could open a feather garden and stupid people would pay to see it. 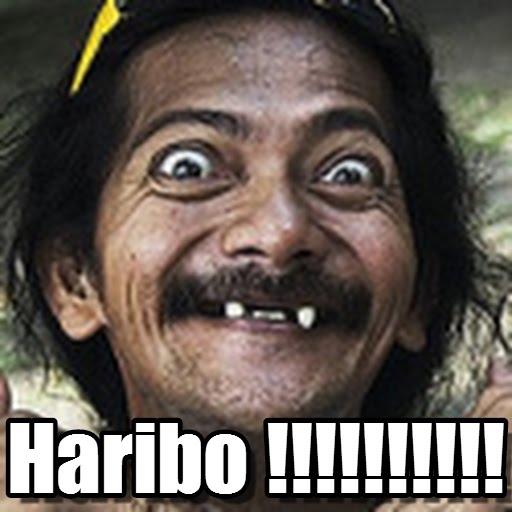 A naked jog pervert was caught out by a packet of Haribo’s in the UK recently.  A guy has been jumping out on women and running alongside them in nothing but a pair of trainers.  I won’t tell you what I would’ve done because that’s another story.

However, officers found out he used to spy on women from a disused railway whilst eating a packet of Starmix and were led to him by an empty sweet packet and a receipt.  That should teach you not to litter and more so to be vigilant about the additives in your food because they turn you into a sexual deviant.  But, worry not, because sex addiction has now been classified as an illness (???) and is available for treatment on the NHS which is just what our struggling health service needs to be dealing with.

I don’t know how this is treated but I’ve got a few ideas of my own. See there’s a bunch of feral chickens need sorting out in Jersey and the people there need a touch of reality along with a much better visitors attraction than a bloody shell garden. Kerr-Ching.

Ha ha I love Jersey remember the traffic Island sign “please take turns”. No it’s me me me first And the car park with no means to pay to get out. We need more holidays like this if we went back with the car and a big cool box we’d have Christmas dinner sorted!

Oh yes, I forgot that particular joy of not being able to get out of the car park and how mad that made you. What a ridiculous concept.
I’m totally up for that! We could make a killing, err..so to speak! 🙂

Do the people on Jersey and import a mating pair of foxes to clean out the henhouse. Or maybe they need proto-Godzillas to do the work. Does Kevin eat chicken? (Note that I didn’t ask if Kevin tastes like chicken).

Good luck with the big game. Being swatted down by Croatia would be a national disgrace.

Kevin does not eat chicken OR TASTE LIKE IT! However, he could bat a flock of chickens out into the sea with his magnificent tail!

Hmmm. I am still smarting…

I make it a point to avoid feral chickens and stick to”Wild Turkey”! 🦃
😎
☮

Me too. It still hurts. Thanks, Goatman 🙂

JS – you need to buy a red and white checked (or is it czeched) body warmer – or vest in the summer. If you wear it in the US, nobody will know what it means, because the vast majority of Americans have no idea that there is even a World Cup. NASCAR is considerably more important in your adopted Texas. Back to the body warmer or vest – the red and white czechs could possibly be mistaken for English crosses if they are arranged adeptly.

And will the French crush the Croatians, who smashed England’s hopes? Nobody in Texas will know unless you make it a point to tell them. Texans are a lot like Kevin in that I don’t think that Kevin mourns England’s defeat. Nor will he mourn England’s defeat when he’s as big as Godzilla, smashing London.

Ugh. Firstly, me in a body warmer is never going to happen, Larry. You know this. Especially one with THEIR flag on it.

Now, you jest, but don’t you think I might’ve sorted that out a bit already? I’ll have you know that I had myself a Texan mascot all dressed up in a 2018 England shirt with flags waving and all. AND, I had Cowboy Church watching and rooting for us! See? Look what I’m bringing to those hardcore Texans! Proper football! Once I have America’s biggest state behind us, how can we ever fail again?

Kevin is going to smash up everything soon! He already bites everyone but me! #LearningFast

what came first? the chicken never will unless the cock crows

it would have been so perfect, England vs. France, the ancient enemies, and that time when the first milkman was introduced into their relationship: http://youtube.com/watch?v=ey0wvGiAH9g

Oh, I was so ready for the French game, my sweet. I had already started taunting my French pals on FB with snide remarks about Agincourt, Joan of Arc and Rugby. Gutted.

My favourite French insult comes from the non PC copper, Gene Hunt, in Life Of Mars which is such a good series. https://youtu.be/SUfNCAfrw-0

>My favourite French insult
On this side of the pond we have no proper French, but have to make do with Quebecois, alas.

Now I want a Nanaimo Bar. Or some foie gras.

Hahahaha! I’m writing some of these down!

There’s times when it seems this small Texan farming community is about to be overrun with chickens. Then the Mexicans kill and eat them. The dog just kills them, which strikes me as pointlessly savage. So I retrieve the fallen fowls, breast the broken birds and turn them into bacon wrapped jalapeno poppers. Tasty and waste not want not.
Problem? Solution.

Well, look at you being all Master Chef, LSP! Do you fancy a trip to Jersey? You’d like it cos it’s ever so posh! ;P

I feel just awful. The whole thing is a mess and I wasn’t supposed to care! I don’t know a damn thing about football but I *do* know a thing or two about being an Anglophile, so I was sucked in proper. It couldn’t have ended the way it did, reet? I mean, it’s a dream and we’re all going to wake up soon, aren’t we? Say everything will be okay.

For some reason I missed this comment, Mark. Please forgive me.

In answer to your question, the pains lessens over time. Everything will be OK, I promise. It’s not over yet!

Sorry about all that!

Thank you, Nas, and welcome, Nas. I’m sorry you had to appear at the most heightened of my depressions but c’est la vie. Things can only get better. Do you like chicken? 😉

Hey, you know me, Blue! I aim to please in every area!