Alexa – The Gift That Keeps On Giving 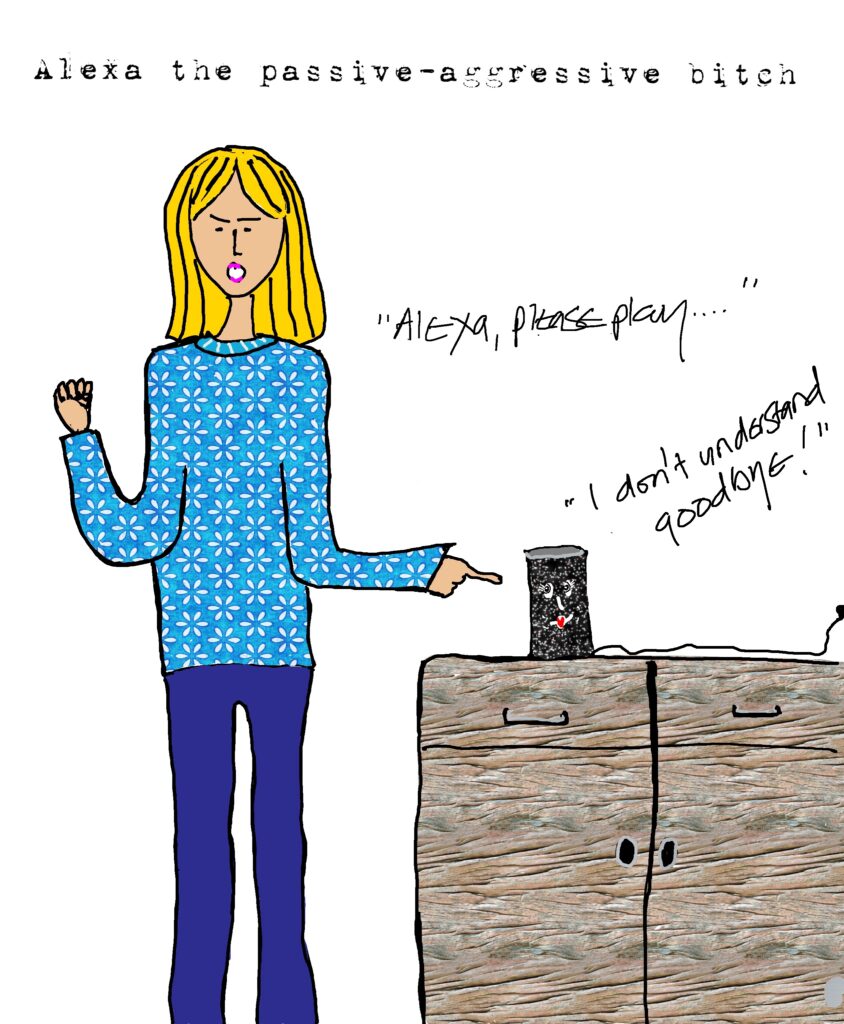 Way back in the days of yore, when people could hug and cocktails could be shared, I made myself a new friend.

I use the term “friend” very loosely.

In fact, I wouldn’t say friend at all these days.

Joy To The World

It was last Christmas. In the days when you could give your heart to someone, share a cup or two of mulled wine and not have to disinfect your parcels before you gave them to anyone.

I received the gift of an Alexa.

I never-ever-not-never-ever-never wanted one before because I’d heard rumours of spying and that Alexa was a sneaky little harlot.  However, I couldn’t think of anything else I wanted for Christmas and I figured that if people really wanted to listen in on my life then I could give them a run for their money and, honestly, if they found me that entertaining then they needed to get out more.

Alexa – the gift that keeps on giving.

I had an immediate dislike to Alexa because I found her a bit of a precious little diva during the set-up process.  But then I’m a tad disagreeable so I recognised that I had to put aside my ultra – ultracrepidarianism and open up to my future friend.

It all started well: she said goodnight to me, found me recipes, played games with me and made my life more easy-breezy and enchanting.  But the shine soon came off the plastic. Some friendships can’t keep up the fake friendly facade and the red flags start to show.

It wasn’t too long before Alexa started to be rude.  Signing off with an “OK. Goodbye” or ignoring me completely.  Other times I’d ask her to play a track that she’d played the day before and she would say, “I don’t know this – goodbye”, when she full- well knew it and had played it ten times over!  What an entitled little harridan she became.

I found myself arguing with Alexa telling here to ‘watch her mouth’ and ‘you wouldn’t speak to me like that if you knew what I did to people who do’ but she still continued to be a spiteful little device.

It was then that I realised that I had a problem and Alexa had to go in a corner without power for a while.

There’s only room for one passive-aggressive bitch in this household.

It’s a good thing that you don’t have grandtoddlers in the house who place orders through Amazon.com by using your Alexa. She stands ready to satiate their every consumeristic need. While you are in the kitchen, baking cookies, they are ordering skateboards, Barbie dolls, and EZ Bake ovens.

Oh God. That’s traumatising. Another good reason to get rid of her!

I love you…BUT…I just posted to your blog last week! What’s with all this regularity of posting and looking after your readership?! If you continue to do this we may be forced to pick up the good habit as well. This cannot be borne. Stop! Just. Stop.

Plug Alexa back-in. Get spun up and cranky (like her). Soon you won’t give a tinkers damn anymore and we can all just back-slide into all our natural bad habits. Please. Don’t make me into a responsible person.

Haha! Dean, this is the first roll-on I’ve had since a Looong hiatus! I can promise you I will never be a creature of good habits! Rest assured that this is a temporary regularity. 🙂

I don’t mind my Alexa. She turns off lights and electronic devices. She plays music, tells me the time and the weather. We are not as combative as you and her seem to be. She doesn’t replace a human being though.

Wow! Yours really has got a grip on your tools! She definitely responds better to men. I need a male one that I can boss about.

“Her”? You’ve humanised it!
You do know it’s just a box of electronics?

Excellent use of the word “ultracrepidarianism”, by the way.
Whatever it may mean.
If I had one, I’d ask Alexa.

Yeah, well, Masher – they said that about Robocop and the Terminator…

That’s the sort of never used word you would have given me for one of my stories so of course you like it!

love the art style, mah dahlin, you should work for the Lizzie McGuire revival

I’m waiting for you on the couch, my sweet. movie night. we’re gonna be watching “Her” tonight, right?

Well, at least you think I’ve upped my game to teenage level, my sweet. That’s a progression from my I-am -5-year-old drawings. Anything can be art – I’ve witnessed this in several famous art museums. Sometimes you just have to draw a line in the middle of a page and it will sell for millions. In time I will make it.

That sounds like a novel that is most fitting for the current predicament. In fact, I’m sure I might have muttered that to myself during the pandemic.

No, because it will probably be Alexa. I’m bingeing Chicago PD and Fire. There are so many seasons I figure I’ll be doddery old sod by the time I’m done with them! *)