Anarchy In The Greenbelt 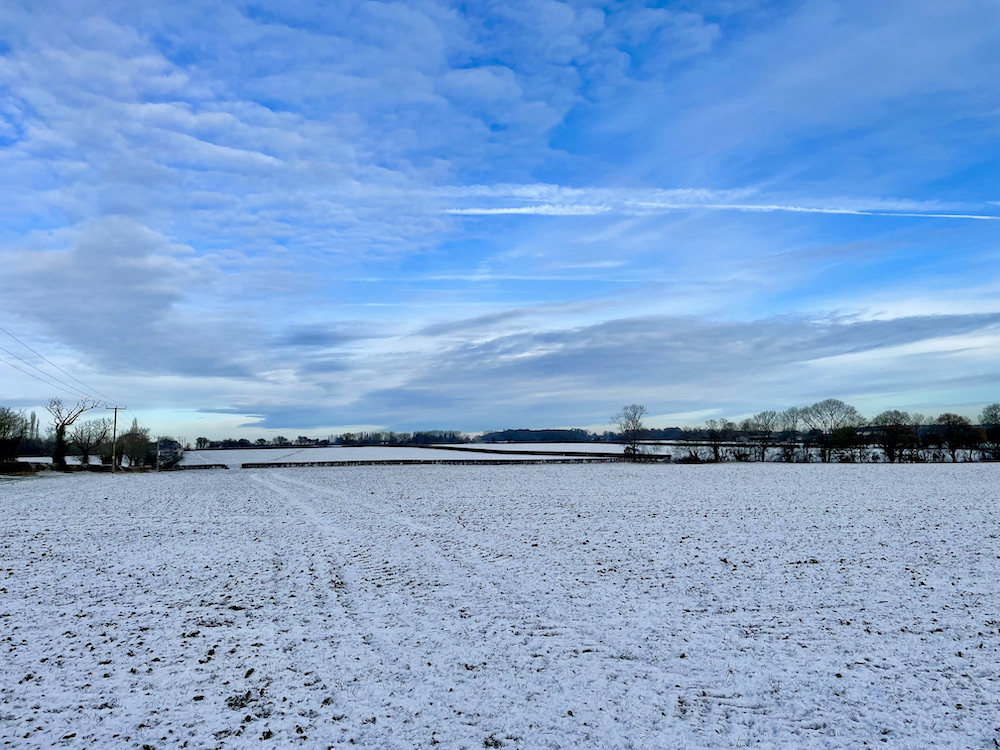 I drove down my road a few weeks back and noticed that a giant 5G tower had been erected on the opposite side of the street. No notice was given to anyone about this happening because obviously, the council can do whatever they want. Fortunately for me, it is a way down the road and does not obstruct my outlook but I felt very sorry for the big house opposite who now had their view of the rolling greenbelt obstructed by a giant phallic object.

A few days later I noticed some graffiti sprayed all over it:

“Who Gave Permission For This?”

“This Thing Is An Eyesore”

This made me laugh as the culprit had to be one of the people living opposite. The folk in those big houses are probably fairly affluent: they have nice cars, keep their front gardens tastefully in order, have elegant Christmas lights, and are the sort that would likely be very pleasant on the whole and not break the law. That’s what I would think if I was to pigeonhole those that lived there. However, it seems I am completely wrong and that anarchy lives in us all. I was very proud of whoever did this and wanted to knock on their door and invite them over for a drink.

“We’ll have to practise on some MDF boards outside before we do it, Elizabeth. I’ve never defaced anything before.”

“Of course, Roger. I mean, bloody hell, it has to be legible or what will people think?”

“We will sneak out after midnight and do the deed. If anyone stops to ask what we are doing we will have to say we are wildlife conservationists. Start hugging a tree if anyone slows down.”

“Right. I’ll bring my clipboard and opera binoculars so we look authentic.”

I pictured them sneaking out in the dead of night in their plaid Marks and Spencer pyjamas, woolly hats, and wellies. The euphoria of getting away with the vandalisation probably left them breathless and they might have even got to it in the drench shower when they got home to wash off the evidence. Power to the people! However, a week later someone from the council painted over it in battleship grey. I’m hoping too much Christmas spirit might see their rebellious nature rise again.

Talking Of Anarchy In The Greenbelt…

You can’t help love your dogs to bits. There is no loyalty like that of a hound. Even if you are cross with them they still love you. No matter what, you are their favourite thing. 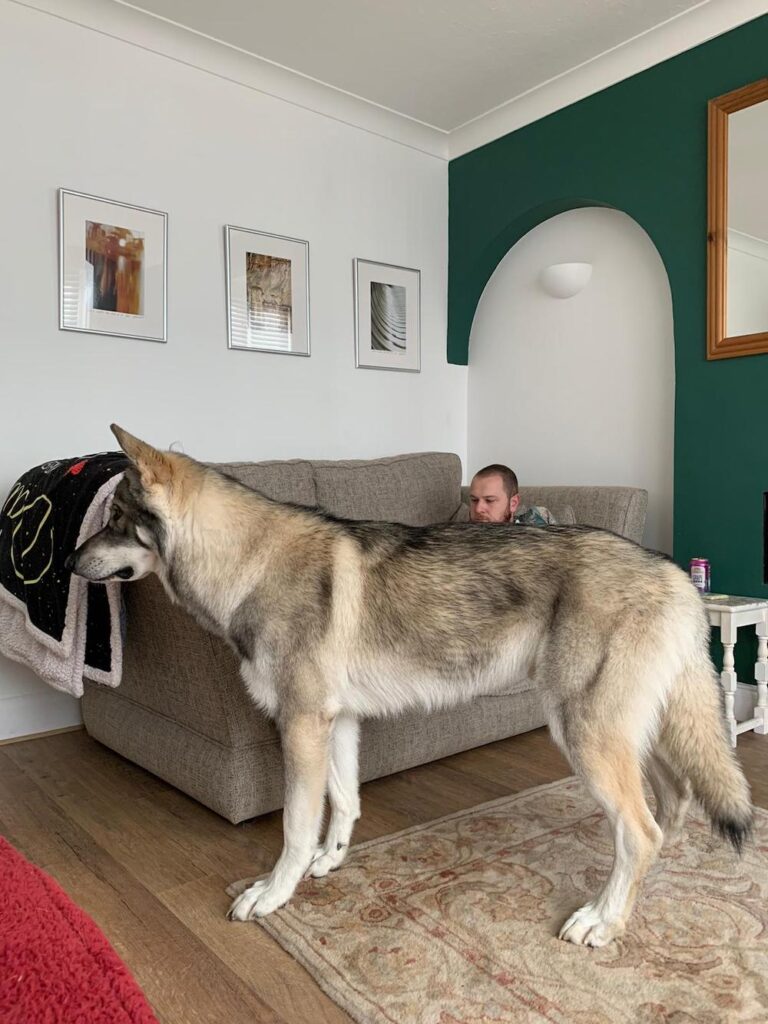 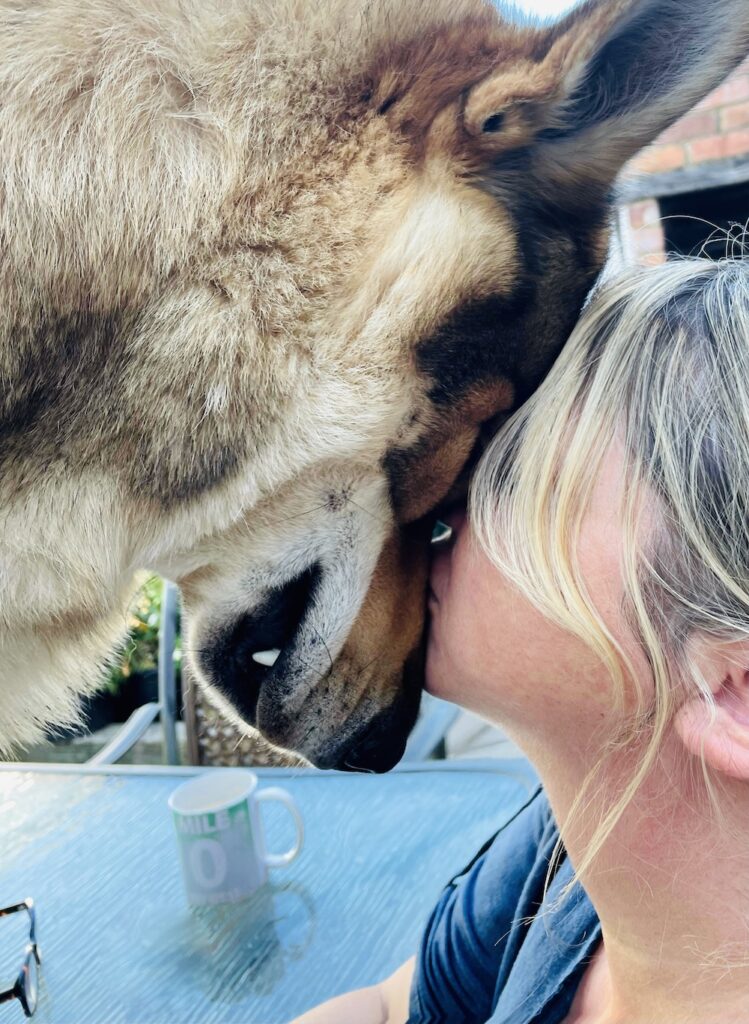 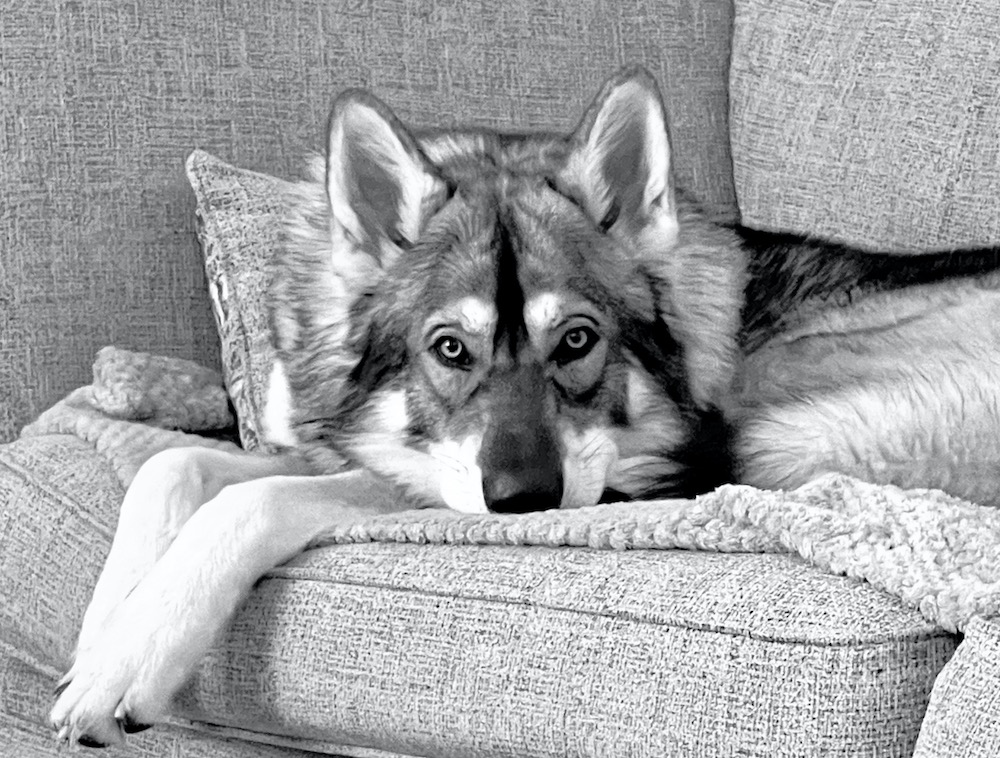 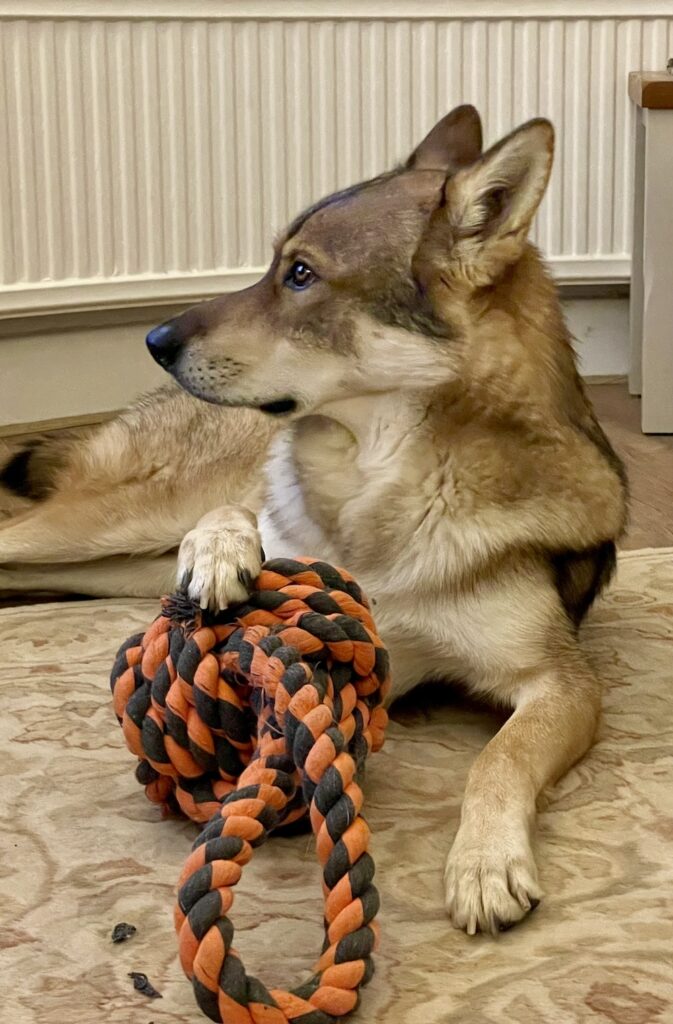 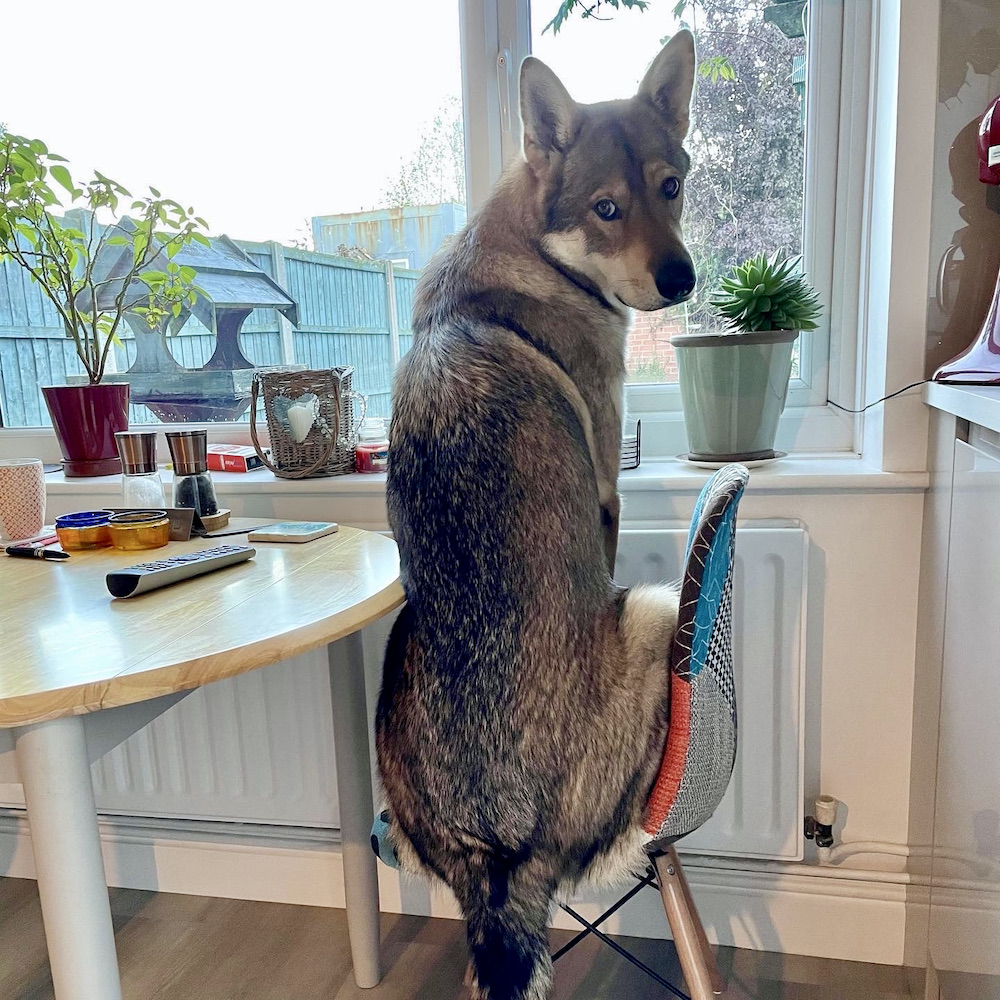 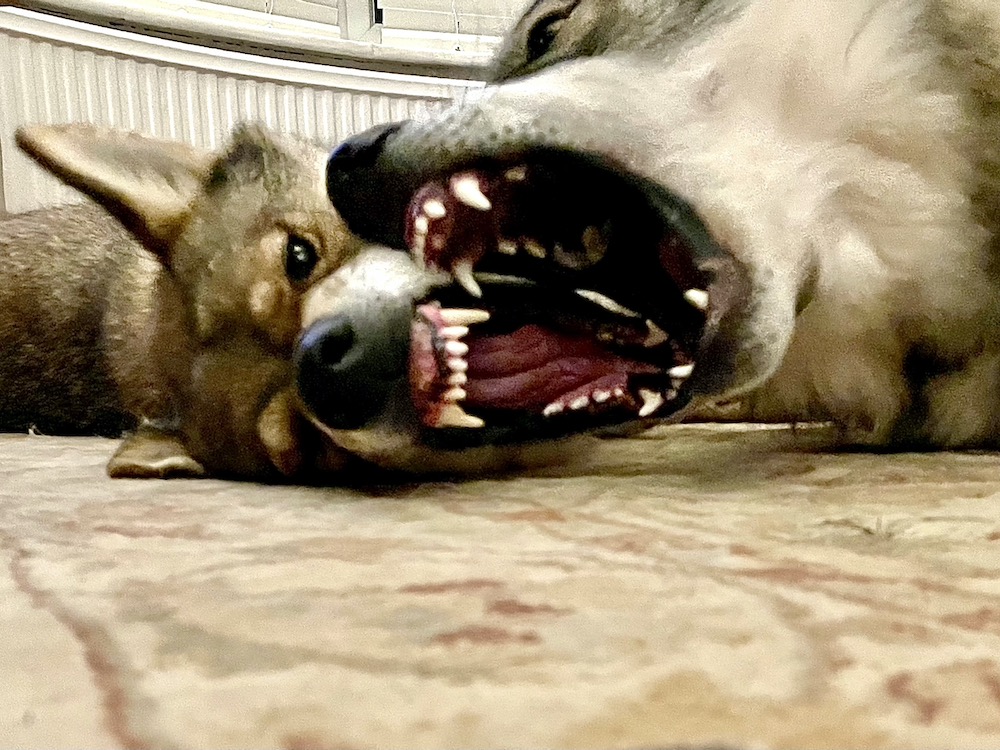 And you have to remember all of those things when they put you in a difficult situation.

Across the fields we walked, as usual, enjoying the fresh air and apricity of the day when all of a sudden a great big hare decided to have a bit of a skip around in the long grass. Oh, silly hare…

Tex immediately set off after the hopper because there was a tasty snack daring to taunt him. Halo intercepted from the right and they began to hunt down the hare at full pelt in pack mode clearing two fields in seconds. It was like watching a David Attenborough show. My dogs are very fast but the hare had a metre advantage and I prayed it would get to ground. I didn’t want to jog that day but there I was trying to run in hiking boots to catch up with them because all of a sudden they had completely forgotten their names when I called them. I had my 13-year-old Jack Russell with me who hadn’t joined the pack, thank God, but instead ran in circles around my feet which did not help me get a sprint on.

“Get out the bloody way, you daft dog!”

I looked up and watched in the distance as the other two came up to a hawthorn hedgerow. Halo stopped. Tex went straight through it. Brilliant.

A few minutes later three animals came running out diagonally in the other direction at full speed.

Hold on, I only have two big dogs, what the hell is that?

How in hell has that happened? Tex must have thought all his Christmases had come at once. Through the hedge he goes after a hare and comes face to face with a deer. Look what I found, mummy!

Why is this happening to me? I just want to go for a nice walk and now I’m hyper-ventilating, barn dancing around a terrier, and wondering if I’ve lost my wolfits. Am I going to find them feasting on a deer? How am I going to talk my way out of this if the farmer sees it? Will he be pleased that my nut-job mutts have cleared hares and deer from his crops or is he going to shoot them and me?

I started praying out loud. Please God, let the deer get away. I have been traumatised from a young age by Disney and watching Bambi’s mother die. I don’t want to be party to this kind of ordeal in real life. I’ll do anything.

Eventually, they came back. Unbloodied and absolutely knackered. Bambi had made it. Phew.

I don’t know who was panting the hardest out of me and the dogs and who might die first but we made it back to the truck intact sans rabbit or venison stew.

Next time, I’m getting a cat.

Don’t they burn those cell towers there because they spread the virus? I would suggest a cat also. You don’t have to walk them.

Ha! Not when you can get a faster connection. People would happily die for that. Says a lot, doesn’t it…

I’m tempted to go and yarn bomb the tower to replace the graffiti. Far more fitting for rural anarchy I think! Imagining you trying to catch Tex and Halo has me in fits of laughter. I may die first because I’m already quite breathless as the result of a mean cold virus!

It was horrendous. You would have laughed. I went back today and Tex was looking for prey. I had to keep calling him back and turning around. Nightmare!

By the way cats are no better! Mine regularly try to kill me by sprinting between my feet on the stairs!

Mine all committed suicide. I started to question my company!

Wolves (or wolf-like hybrid dogs) need to have their fun and taking down a healthy deer in its prime when they don’t have a full pack to participate is a challenge. We have a pack of wild wolves that have settled into the area and from what I’ve witnessed firsthand, the elk (about the size of European Red Deer/Hart) will run but if a wolf separates from the pack, they’ll turn the tables on the wolf. However, Halo and Tex seem to have all the instincts intact to take one down if conditions favor.

Thank you for the insight.

I honestly don’t know what they’d do if they caught either one. Would they kill it and tuck in or not? I think they might, instinctively.
Hopefully, I never have to find out!

“traumatized from a young age by Disney and watching Bambi’s mother die.”
Me too!

If you want to get traumatized, try hanging, skinning and cleaning a fresh-shot deer. That experience made me consider become vegan (well, for about ten nanoseconds at least).

Oh my God, I don’t think I’d ever eat meat again if I had to do that!

Right, Rick? Disney is a bastard! And so are Peter, Paul and Mary. These people ruined my childhood!

don’t worry, 5G towers are safe. now if it’s a black monolith, THAT’s when they shoot laserbeam voices into your head, the voice is a daily greeting from Kubrick…nobody knows what Kubick sounded like…

the Wolfit Pack is ready for Halloween! got the orange-and-black sailor’s rope

one time as a kid i watched a Bugs Bunny cartoon then ate venison. never recovered, traumatized for life

Hmm. I just don’t like the look of it. They could at least make it look like a tree.

I’ve had many cats. My first was called Dog. Then I had Bowie. Then Marks and Spencer. Spencer died and was replaced by Sparks. Then Chaos and Cruella followed by Dumbledore and then Gingernut the ginga ninja.

If I had a new cat I’d try and err on the side of positivity and call it Lucky. *)

We have a 5G mast down the road from us. ‘Tis a thing of beauty!

And: good use of ‘apricity’. Love it when I have to look up a word!

Being the aptycock you are, I’m sure you like that!

Hilarious and hits much too close to home!

It sure does, Ginny! I hope you have a wonderful Christmas X

I’m glad the Deer and Rabbit got away, but your Wolfies had a grand time in the thrill of a hunt, which is instinctive, even with Cats. My Granddaughter got a Maine Coon Cat Kitten, he keeps getting bigger and bigger, he loves to Hunt everything… I began to wonder how large he might actually get? When I googled his Breed of Cat I was gobsmacked, up to 27 lbs., holy Hell, we better teach him to Play more gently before he gets that large or things could get scary when he thinks he’s Playing with us?! *LOL* Those transmitter Towers are an eyesore, but everyone attached to their Tech Gadgets need them, so it’s a necessary Evil.

Oh, I’m so glad they got away. Good grief, that’s a big cat! Don’t piss it off whatever you do! How big are its claws?

Such beautiful wolves! Mine’s getting a bit sleepy, bless him. But did you say *barn dance? Oh yes indeed.