Anniversary Of An Art Philosopher 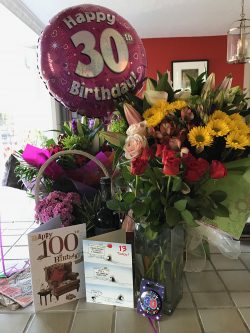 It’s all about me.

This week is mine because it was my birthday t’ other day which always lasts for a week. Activity after activity.  I’m completely worn out already and it doesn’t end until Sunday.

As you can see from a section of some of my well wishes, people are a little confused as to my age. Am I 13, 30 or a 100? Looking at that armchair, pair of slippers and  glass of fine malt scotch, I think I’m happy to take a century.

I don’t know how these people dare be so cheeky to me. Their cards have been marked. 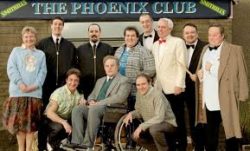 For those of you that aren’t from the UK and may not have watched this show, let me explain.
Phoenix Nights is a British sitcom about a working mens club in northern England.
A few of my friends and family threw me a surprise party at such a place.

So, I got randomly invited to a “country night” at this local Miners Welfare by someone.

“What? Why in the hell would you want to go there?’ I asked.

“So what! They’ve got a gig on, let’s have a look. We can go and take the piss and leave if we don’t like it. Wear your cowboy hat.”

I arrived at the said venue just to appease. When I walked inside there sat loads of my sneaky friends.

“Surprise!” You can say that again.

Apparently, before my arrival the “locals” were very sour -faced and most put out at a gang of rowdy revellers arriving. My clan had re organised the room creating a big circle of chairs and stealing tables for bottles of champagne, cakes and pressies. Bit like a wagon circle protecting themselves from Injuns. They were told under no uncertain terms, several times,  that there better not be any noise when the turn came on.

Well that worked out well. Half way through the night after line dancing on the wooden floor as “Travis” belted out his country classics on his bass guitar, I noticed that half of my friends were missing. I went in search only to find them huddled together in a quiet room in the back of the club.

“No! We got asked to leave for making too much noise. They’ve put an old geezer on the front door to stop us coming back in!”

My friends got barred from the Miners Welfare Club. Priceless.

In next weeks episode

You will be pleased to know that somebody bought me some horse riding lessons starting this Saturday. Cleverly booked on a morning right after a cocktail bonanza with my friends in the city the night before. Hungover on a horse may not be smart. However, I shall be taking my GoPro so I can show y’all next week how much horses hate me.

I’m now off to a spa all day. The last time I went to a spa I set fire to the table. Being the genius that I am, I tried to put the fire out with a paper napkin. You can imagine how that went.  I got asked to leave.

Wouldn’t be a proper party without the rowdies being asked to leave ? ?
x

Happy belated birthday Jules! Sneaky friends are always good to have… years later it allows one to have laughs and commiserate about all the places you got thrown out of or set fire to.

Why thank you kindly, Hardnox!

I have many sneaky, cheeky reprobate friends. Just how I like ’em.

Yeah… that’s going to be eventful. So long as I don’t get chucked off, I’ll survive! 🙂

You can tell the miners that you’ve been thrown out of a lot nicer places than theirs for doing a lot less. None of the miners lost an eye or a finger; the establishment hadn’t burned to the ground; the drunken revelry/orgy did not lead to the police arriving; an ambulance didn’t arrive to take half a dozen people to the local hospital to have their stomachs pumped; so what’s to complain about? The miners would never survive in Texas.

Good luck with the horse. Do they still have horses in England? Like real horses? ;^) How far can you ride in one direction without having to jump a fence? (I’m poking fun at you because you can ride many hundreds of miles in the American West, in the mountains, where you feel free – and differently than you ever felt before – without worrying about a single fence. And you can carry a gun while you do it. — or you can ride a steam locomotive to Silverton if you’re tired of riding.

Do you know what happens to people who poke fun of me, Larry? 😉

I think they might have lost a few appendages during the miners strike. That’s what you get for listening to Arthur Scargill.

Party’s are made for brawls. These old, fuddy duddy locals are ridiculously set in their ways. I’m tempted to go every week just to wind them up.

Look, I can jump a bit of a hedge or fence if I have too. You’re brought up doing that where I live. And, there are tons of horses. They all get in the way of my Rover when I’m trying to fly down country roads.

Best. train ride. ever. What a place.

Happy Birthday! Stay on the horse…

That’s my plan, LSP! I can hang on for dear life if I have to. Like a Pitbull. 🙂

Well, on the upside, we weren’t asked to leave Lord Byrons ancestral home. Now that would have been hilarious and shameful in equal measures

That’s true. Though it could happen. I think we were way too full to cause a ruckus! Next time 🙂

Happy Birthday, ol’ girl!
You should have said: I’d have baked a cake.
Thirty? Yeah, I can remember that.
Just.

Well, you can still bake one, Masher. My birthday lasts a long time and I never look a gift horse in the mouth.

I’ll let you know what it’s like when I get there, what with me only being 13. 🙂

Congratulations and felicitations, Jules! You are clearly more popular than Doris Day (or do I mean Diana Dors?). Even the headstrong English horse will grow to love you!

So long as I’m more popular than any double D that’ll do for me, Mr. Gorilla Bananas!

It had better love me or I’ll have to file a complaint and go and test drive a flash car instead! 🙂

Shameful girl you enjoyed your surprise party and I could name many places that have barred you and rightfully so for you’ve always been a very naughty girl!

Just think how boring your life would have been if you’d have had a normal girl…. ;P

Leaving a trail of fire, upended tables, noise and destruction in your wake. Is there any other way?

No other way, M. Keep yourself in peoples minds’. Nobody remembers a goody two shoes. 🙂

happy anniversary, mah dahlin! you are the hottest older woman of all time, wink wink

Phoenix Nights?!!!!!!! i auditioned for that show but didn’t get the part. they asked me my name. i said Phoenix. they said i wasn’t right for the show. the career’s not going well……

welfare club, that’s my kind of place. i want to live there like i do the YMCA.

rock ‘n’ roll forever! always be a rebel! in my case since my parents were into Satanic death metal i listened to a lot of gospel songs.

i never knew what napkins were for till last year. i always thought they were for doodling on.

Thank you, my sweet!

You have to add Phoenix Nights to your list of shows if only to get an insight to British northern social clubs. You would have soared in such a role.

Paper napkins are for helping fires. I never knew until I tried it. *)

I have noticed you don’t monetize your site, don’t waste your traffic,
you can earn extra cash every month because you’ve
got high quality content. If you want to know how to make extra $$$, search for:
Boorfe’s tips best adsense alternative