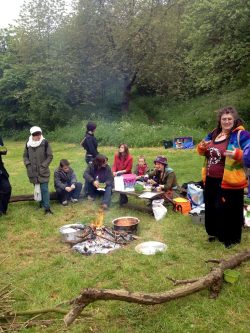 I hadn’t seen my ‘Witchy’ friends for quite some time so when Anniesu of Runswick came over to see me asking if I’d like to attend a fair at the weekend I thought it would be a nice idea.  They’re very good at pulling me over to the very odd/spiritual/road less travelled side of life and balancing out the stressed Juliette full of toxins and anxiety.  Albeit their ways of doing so tend to freak me out.
“What’s this fair then?” I queried (you have to be on your guard)
Anniesu opened her ipad (yes, witches have ipad’s nowadays) and quickly flashed a pretty picture of some event.  Just enough for me to be lured by shiny things that I might want to buy.
She got into my car the next day and informed me that we’d also be going to fetch Pennyliscious of Edison.  Now I was outnumbered.
Off I drove listening to their craziness and then Annisu told me to pull up and park.  Obviously I did as I was told, but couldn’t see a fair anywhere.
“Where is it?” I asked.
“Come on” she said “It’s down this little bridle path and into the woods.  And off she marched through the bracken.
Oh God.  Here we go. How many fairs have you been to in the middle of a wood?
On we went for a good ten minutes until we arrived at this: 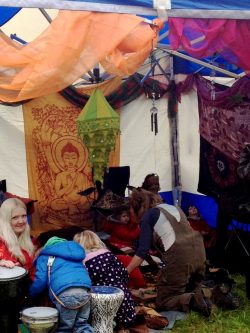 Three tents.  Just three.  A big fire in the middle and that’s it.  One tent was full of cushions. The end.  One had Pagan and community information and one had some bits for sale. None shiny.  Everyone was dressed in dungarees and felted stuff and wore that carefree, Mother Earth kind of attitude.  There I was in a furry Jacket, tight jeans and high wedged boots.  Yeah, I really fitted in.  All of a sudden a woman came across and said
“Welcome!  From where do you hail?”
From where do I hail?
“ I hail from the Seven Kingdoms of Westeros and I am Khaleesi, Mother of dragons”  I replied.  Ok, I didn’t really, but that’s what I felt like saying.
Another lady then emerged from the campfire, not too unlike the Mother of Dragons as it happens, except without the naked part and the dragons. She said “ Please come and have some Three Sisters Stew, it’s all free, just get a bowl”
“Are there three sisters in it?” I queried.  You never know with these Pagan types, it could have been some sort of sacrificial dish for all I knew.
“ No, it’s all vegetarian and gluten/wheat/peanut/sisters/toxin free (basically anything that makes it taste nice)
“I don’t suppose there’s a burger van coming then?” I said to my witchy friends.
I’ll be honest, I’m not a fan of vegetarian food.  I like vegetables but not all of them together at once.  I find it all a bit bland and it wreaks havoc with my digestive system that is now fully in tune with caffeine and alcohol. However, being the true spirited Brit that I am, I don’t turn down freebies.  Hats off and broomsticks to one side, that was a good stew and I was pleasantly surprised.  Having said that some spicy chorizo thrown in would have knocked it out the park!
Full of vegetables and trepidation, I followed the others into the large cushioned tent.  Here there were people getting out clay ready for some sort of activity.  The activity was making a Boggit.
“What’s a Boggit?” I asked
“ Well, the thing is, nobody knows” said the lady with clay.  “Nobody has ever seen one so who knows knows what they look like!”
“They are naughty woodland creatures” said another.
“They are the creatures that make things go wrong or break” said a man.
“I thought they were Gremlins” I replied.  At least I know what they look like, I’ve seen them on the telly!
“How do you spell Boggit?” I asked.
Nobody knew.  So, in a nutshell, no one has seen them, no one knows how to spell it and no one has a clue really what they’re on about.  Awesome.
I decided to draw a Boggit/Boggart/Bogit as I was not dressed for the messy clay activity. I sat in a chair at the back with some crayons and set to work. 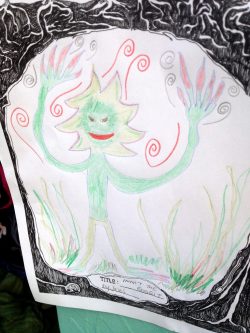 Heres my Boggit.  He’s called Innit the Boggit.  If I took this to an art therapist I’d probably be sectioned.

Here’s a clay Boggit (interpretation of non existent creature)
The Boggits were hung on a dedicated Boggit branch ( mine was pinned to a board) and left swinging.  I’m guessing to scare off the real Boggits that were watching from beyond the trees. 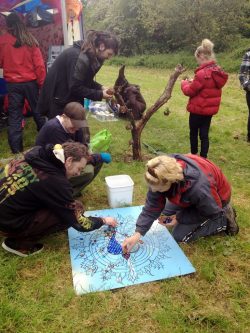 Despite being put way outside my comfort zone by my witchy friends, I actually left the event feeling very calm and grounded.  The witches plan successful.  The people involved were incredibly kind, chilled and open minded and I should aspire to be more like they are.  Probably in a forthcoming lifetime, though I’ll probably come back as a Boggit!
Ah well.  Blessed be!

Ah, how I love mythical creatures with silly names! It reminds me of Tove Jansson and her Moomins and other funny creatures. As for your witchy friends, they look overdressed to me. Shouldn’t these ashrams be held when the weather is hot?

Moomins ! I’d forgotten about those! I wonder if they are scared of Boggits? Are there any Boggits in the Congo GB? As for Ashrams, if you’re going to hold them in this country, you can’t rely on the weather. Though shouldn’t they have done some witchety spell dance?

The scared one was the Fillyjonk! I had to look up her name because I couldn’t quite remember it.

Hahaha @ “So, in a nutshell, no one has seen them, no one knows how to spell it and no one has a clue really what they’re on about. Awesome.”

I don’t like vegetables on their own either. I need something to mix it up a bit.

I always find it amusing how witches seem to be stuck in a time warp – the medieval ages to be specific. Looks like you had an interesting time, and your boggit looks good lol!

They do seem to be stuck in the medieval ages! However, if I were to meet a high flying ( excuse the pun) lipstick wearing, Armarni clad witch I think I’d be terrified!

They are for capturing witches! My squircles must be used with caution. They have been known to traumatise.

I think my Boggits has more talent. But yes, they seem to know what they’re doing in a bizarre, lulls belle kind of fashion.

That’s the thing about hippies,I don’t go for any of their mumbo jumbo bollocks but when I meet them they are always so incredibly decent that I can’t help but like them.

I know what you mean. Jumbo jumbo is the future of world peace and harmony. Yikes.

As is mumbo jumbo!

hail Khaleesi !
you should have just said it, Juliette. lol.
i’m all into Katniss Everdeen at the moment after Khaleesi :p
at least they had a tent full of cushions so you were comfy. on the other hand, i’d love to meet these people. i met someone like these witches today…she wasn’t a witch but she had some knowledge on that world. quite interesting.
loved this post by the way.

Ha ha! Hail! I know, I wish I had now! It’s certainly interesting. An experience. I find it keeps me balanced to be taken into a world of oddness!
Thanks 🙂

I met a witch once. She turned me into a newt.

Boggits eat newts. Be very careful! Thank goodness you’re back to normal, it could have got very nasty!

You’re full of caffeine and alcohol and anxiety? That can’t be right. The same goes for witches with iPods. I don’t even have an iPod and those witches do? Dear Lord, what’s next? I need to rejuvinate myself. Maybe the witches know how. I also want to wear that carefree, Mother Earth kind of attitude… please. Something tells me that would require more than three tents and Three Sisters Stew (unless there’s three sisters in it, of course).

I don’t know why… but suddenly I’ve got this urge to go and watch the new Hobbit movie.

Yes, I am a walking toxin. I’ts not right at all RCB! I think 3 sisters might do it it but not the stew! Please tell me if you spot any Bogitt’s or witches with ipads in the new movie.