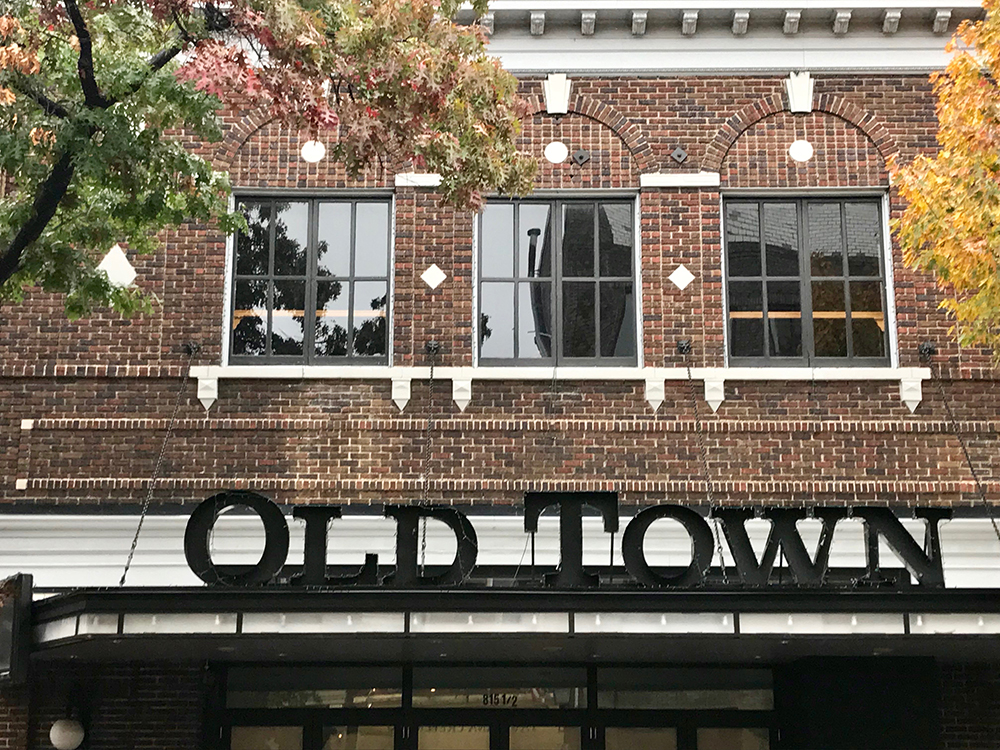 Satirical Snapshots Bringing You Whimsy On A Wednesday On A Friday Because I Forgot What Day It Is!

This is what happens when you commit to something: You stick to it. Unless you’re called Jules Smith then the rules can be changed at any time.

I think it was because I went from…

Rural To The Capital 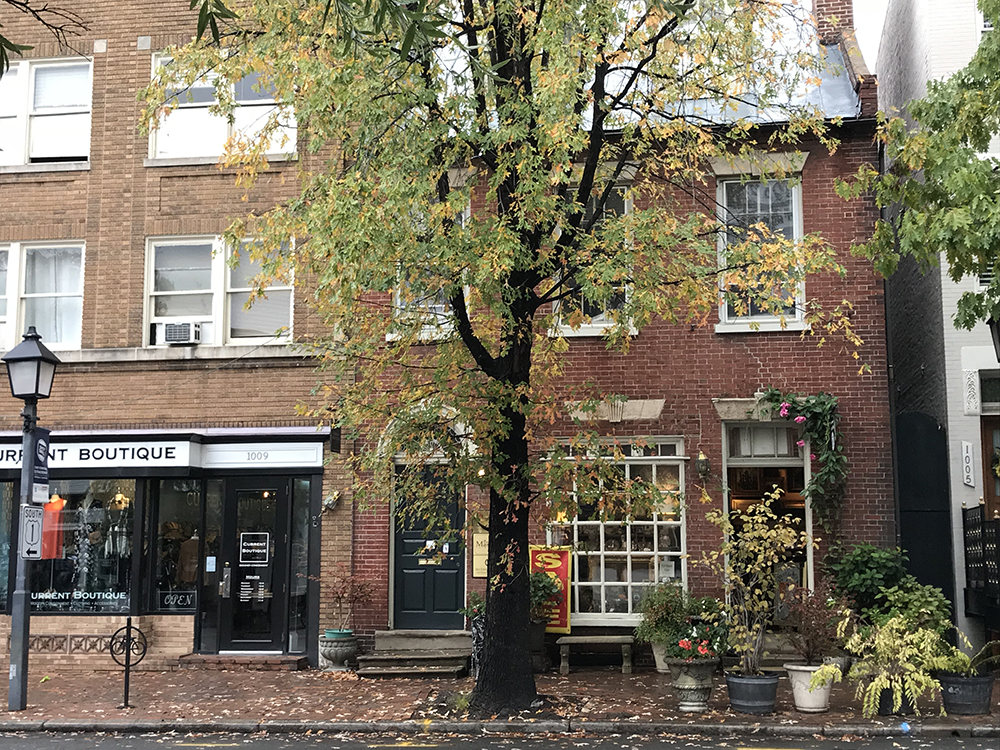 My friend, Double D, who works in immigration for the big scary government ( kind of useful when you’re a targeted alien like myself) put me up in a lovely hotel in Old Town Alexandria, just outside of DC and in VA. Thank you very much, very nice. Had my own mini suite overlooking a swanky atrium.

The first night I was there I noticed a load of guys dressed in some fancy shmancy get up. Seems the atrium had turned into a black tie affair and nobody told me to take my jeans and bewwwts off.

“What are you lot all trussed up for?” I asked as I wandered towards the bar. “Is this some secret club I need to know about?”

I watched as my hotel turned into some Prince charming and Cinderella Disney ball and decided to take myself off to the local Sports bar, where I’d fit in better, in search of bacon wrapped BBQ shrimp. I sat at the bar eating my delicious food between a retired Navy Commander and a Spec-Ops Pilot talking about rubbish. You can’t move for military people around these parts so in order to fit in I pretended to be a spy.

The next morning I wandered bleary eyed to the lift to go to breakfast. There’s a proper nice omelette lady who doesn’t skank you on the bacon sides. In fact, she doesn’t know when to stop and it’s like a bacon heaven overload. Win.

The lift door opened and it was full of people in camouflage. Two of them stepped out and braced the lift doors. I wondered if we were under attack. I stood there for a few seconds to see what happened but nothing did. Apparently, it seems that military people have to hold back the evil lift doors in case they crush you to death. Whatever. Very OTT respectful. When it hit the bottom floor they did the same thing and waited until I stepped out first. I almost wished I’d put on my princess frock and tiara.

The queue for breakfast was also lined with camouflaged people waiting for the omelette lady to work her genius.  I got my plate and stood at the end of the line, but here’s what happened: The guy in front of me stepped aside and said, “After you, Ma’am” and so did the next and the next until I got to the front of the queue and to the egg station in rocket speed.

Anyone who lets me get to the bacon first has my total respect.

I am totally bowled over by the manners of the Marines in this country and have decided that every male should be forced to join up. This isn’t just for my selfish reasons, much, but I think the world would be a much better place with people who behaved like this in it, and women would be nicer cos they’d got their breakfast first.

Apart from a few swanky meals in Georgetown and a walk around the capital I spent the rest of my time in Old Town Alexandria. This place looks just like England. As it should. Quality settlers, see.

This is Captains Row in  Alexandria.  Looks the spit of an English village with red brick townhouses and Irish pubs around the corner. 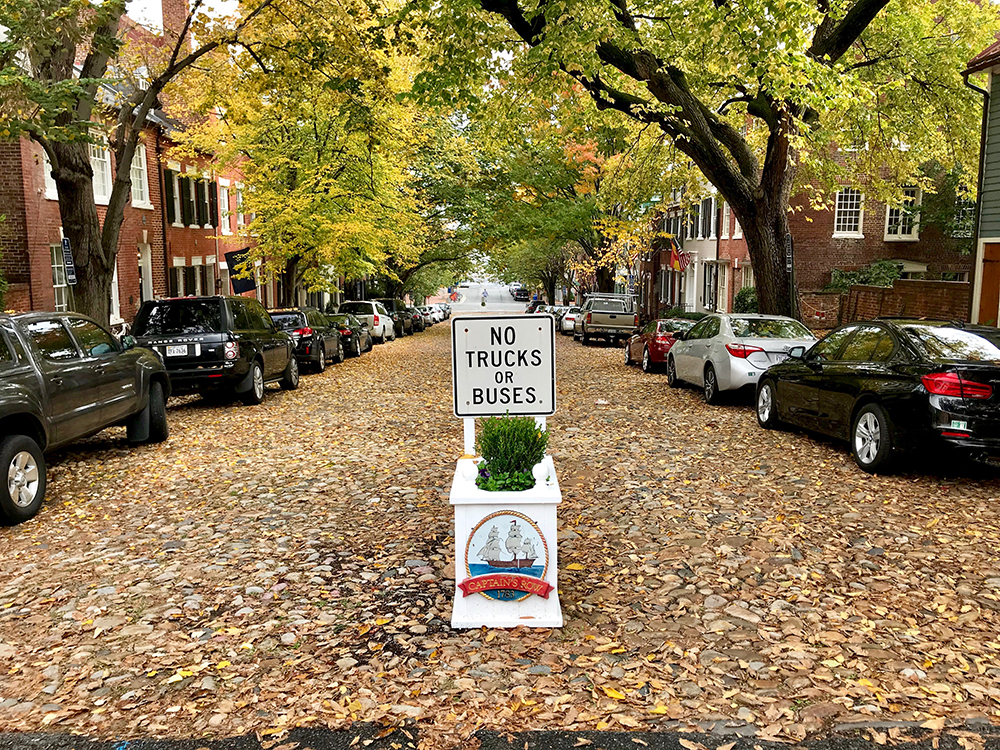 The waterfront ~ where I hoped to steal a yacht. 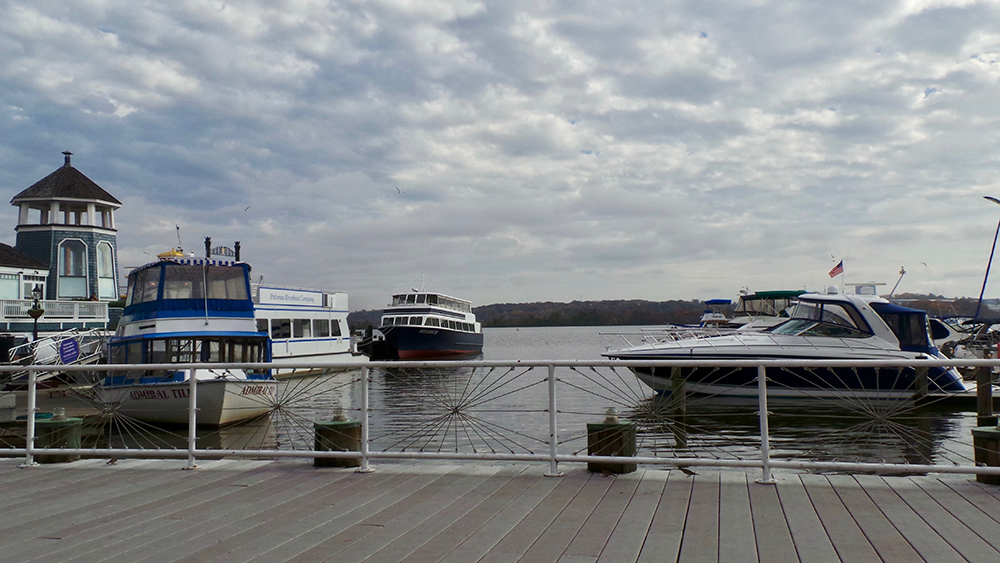 Time for some much needed Art Philosophy so I visited the Torpedo Factory Arts centre which is an old munitions plant and now home to artsy fartsy artists.  It also has a torpedo. 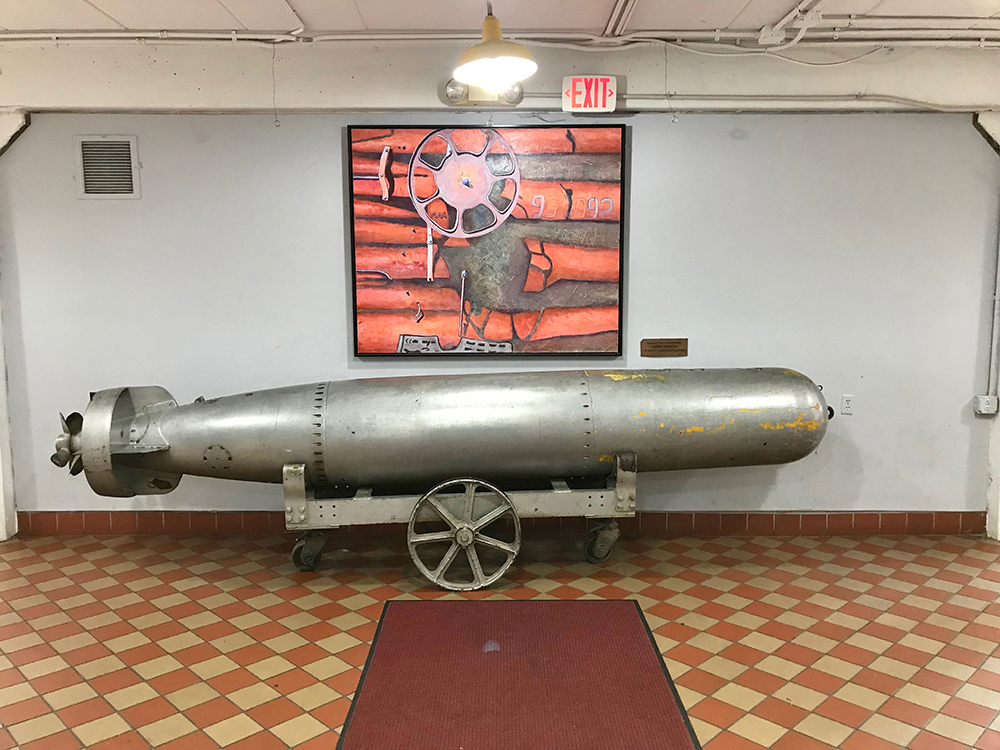 And a very scary lift ~ like ‘The Scream’ tenfold. Where are the Marines when ya need ’em? 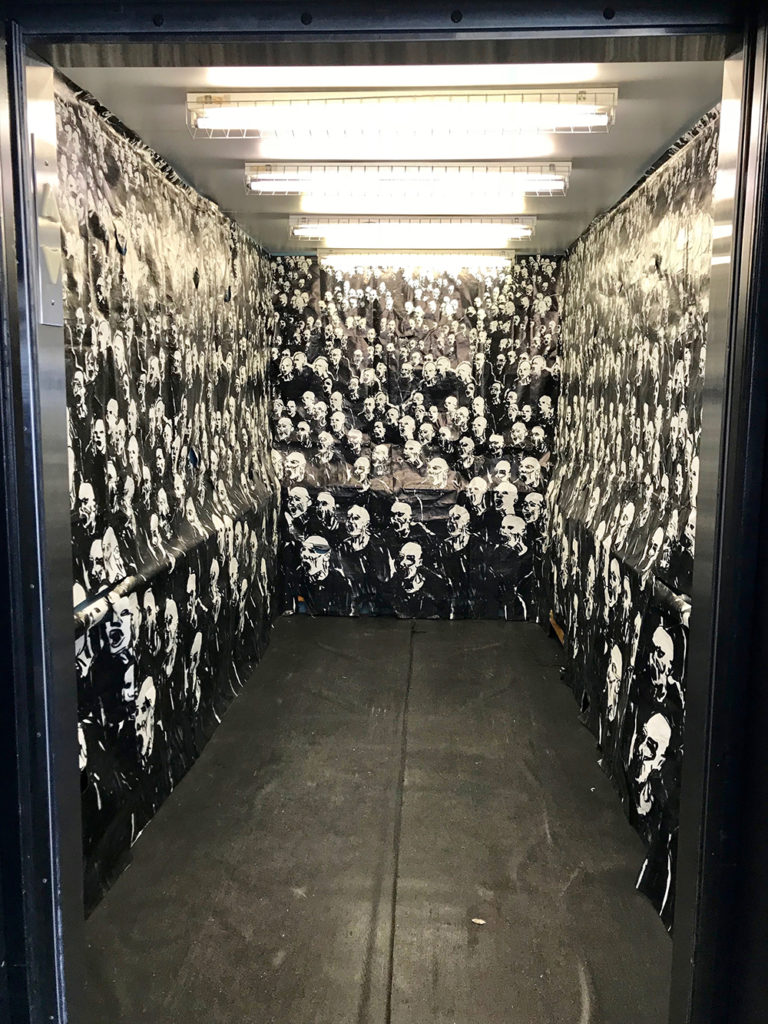 WELL HOLD ON A FLIPPIN’ MINUTE – I spy a decorate your door exhibition! Why was I not informed about this, being the doory door lady of the world?  Because I would’ve won, that’s why.  There’s no fun in a competition when there is no competition. 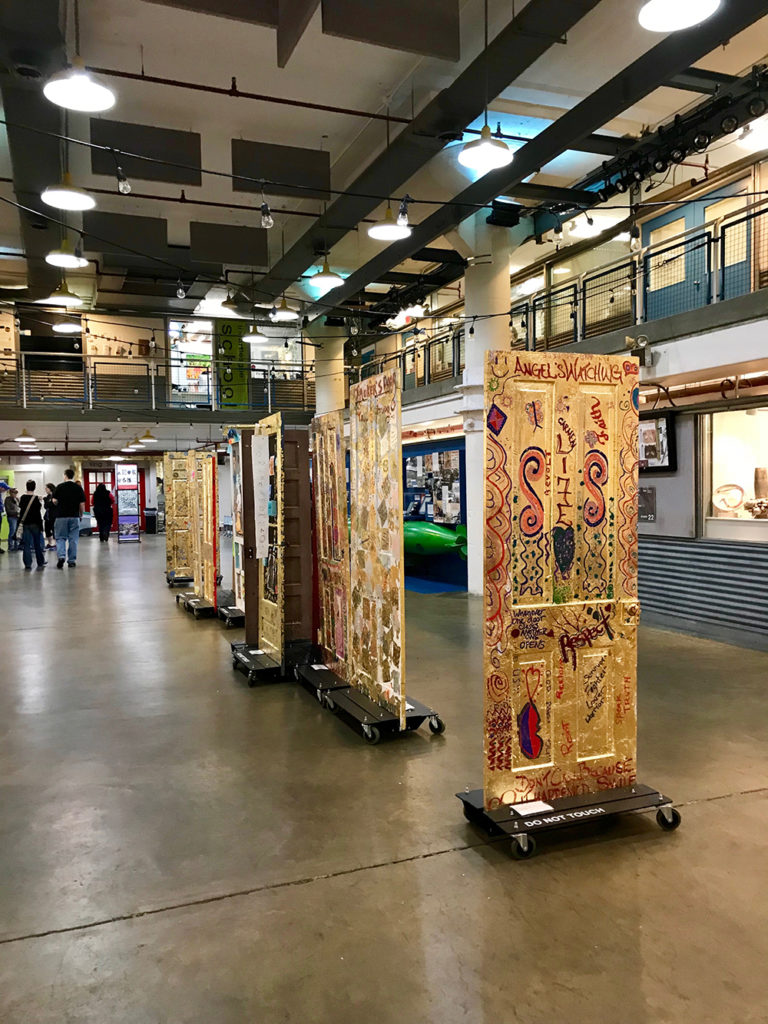 Annoyed by this slight, I walked back up King Street and came across ‘The Hollywood Wig Store’  Hmmm. It quotes, “You too can look like a Hollywood star.”  Right.  Because this dude looks like a throwback from a dodgy 70’s show who would likely be wearing super tight budgie smugglers as he strolled along the Florida seashores staring lasciviously at sunbathing chicks.  Which, brought to mind a friend of mine. Had I had the $200 for this handsome looking wig and moustache set I’d have sent it to him for Christmas. Heh. 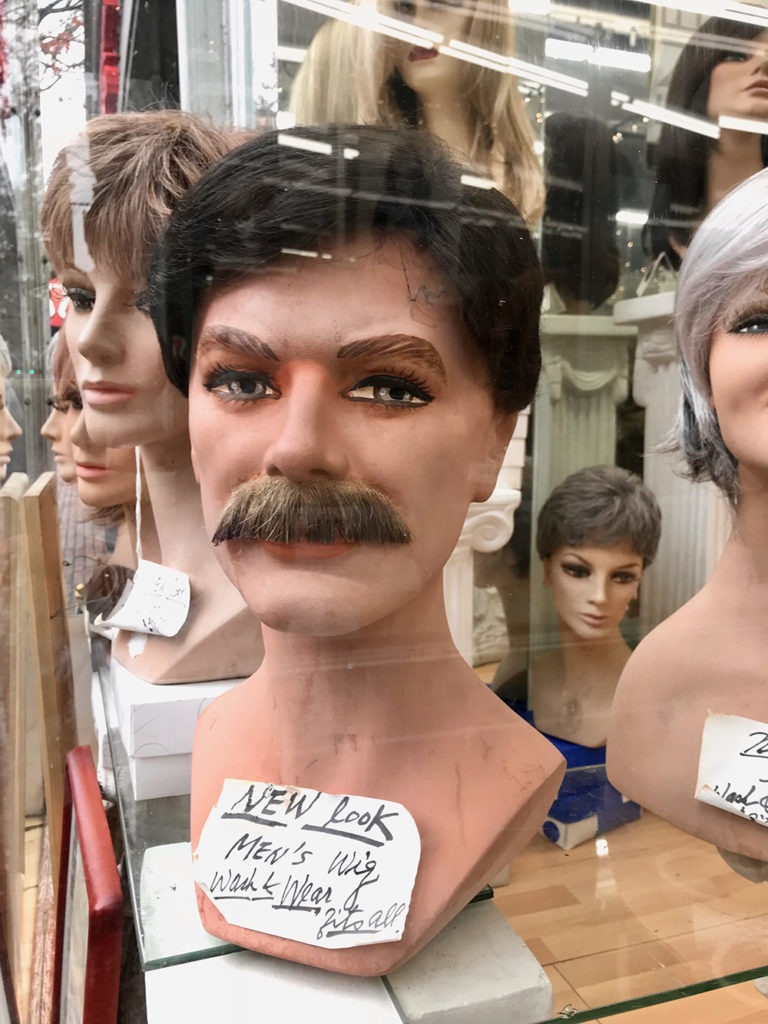 I decided to go back to the sports bar. I made some new friends from San Diego. 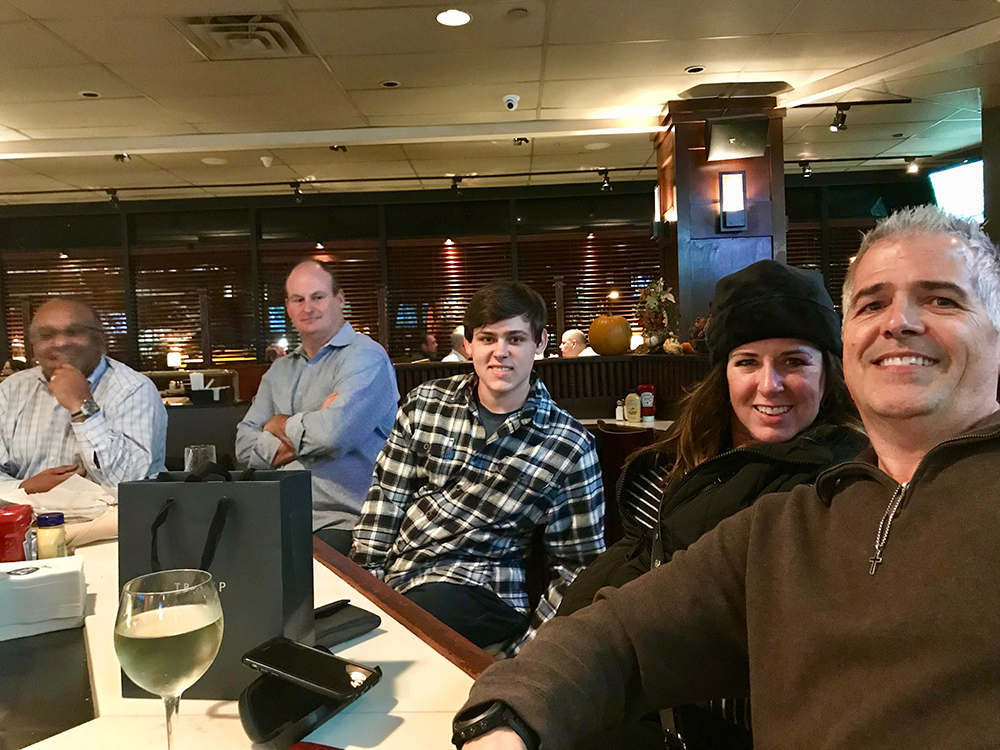 Proper nice folk.  And here’s the barman who tried in vain to explain the football rules to me and made me repeat them before he made me a Lemon Drop Martini.  Honestly, I felt like I was in an episode of ‘Cheers” except I wasn’t in Bawwwstun. 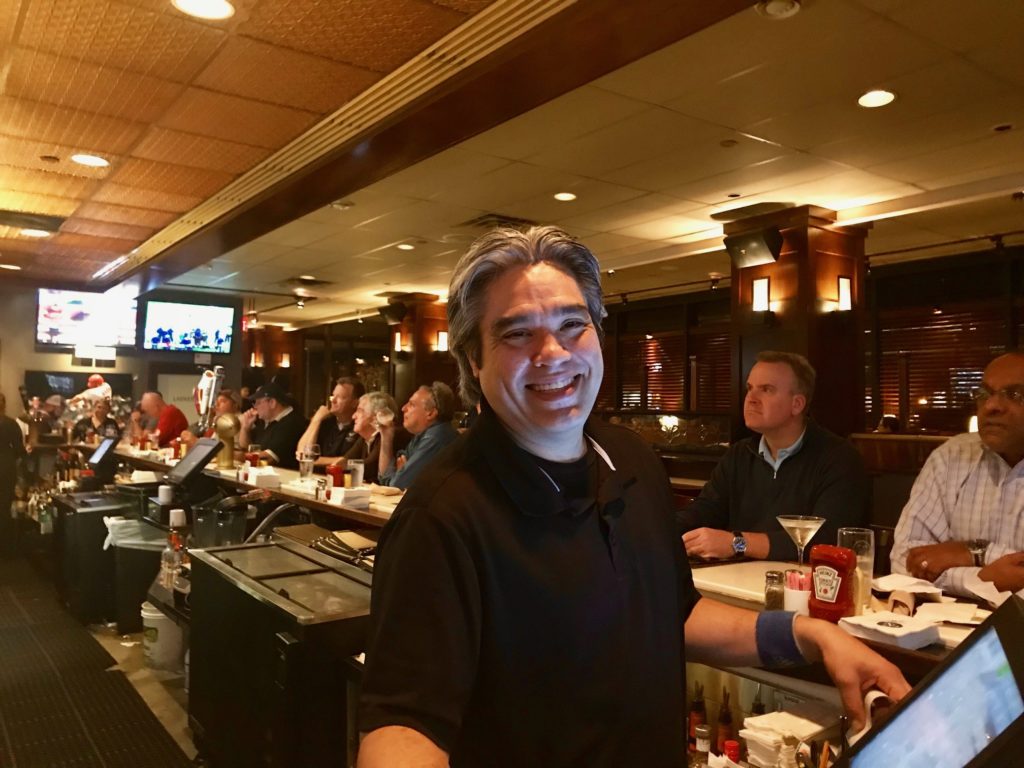 Well, from now on you’re going to be called Dora the Explora!
I can imagine with all of those marines around, it would have been like being in an episode of NCIS….. ooh Special Agent Gibbs! You were a few days late, but worth the wait.

Or, DOOR-A the explorer! Heh. I might grow up one day.

Theresa, I felt like I was in an army camp but totally safe and in no danger of missing out on my bacon omelette.

You could have joined up like Goldie Hawn in Private Benjamin or more fitting acted like you were Princess from a foreign town and these were your bodyguards. Anyway an infamous writer like yourself should have an army of strong sexy men pandering to your needs

I quite like the idea of being a princess but with the command of a general and all these people at the beck and call of my whimsy. Ha! 🙂

There’s a lot to like about this powerful post; Princess, Tiara and the USMC itself. But where’s the white fur cape? Confused.

I know, right? The fur white cape would have been perfect! Why have I not got one, LSP? Go skin a unicorn! 🙂

there’s nothing like those mid-autumn New England scenes/ there are no more roads, just galleries of golden-brown leaves

I want to see you in a princess frock and tiara. so does the Trivago guy. let’s have a trio and play cards or something.

every boy remembers his first riding of a torpedo. my uncle was named Strangelove. Sellers Strangelove.

that looks like a nightmare I once had. I was on trial and the jury of my peers were little Nosferatus into glam rock.

I will aim to make a video in all my princess glory, riding a torpedo into glam rock hell like a handsome woman. *)

Well, look at you having fun and making new friends in the colonies!
The UK Govt should make you an official ambassador, or something.
In fact… blond and slightly scatty makes you a perfect replacement for our Foreign Secretary.

Good call, Masher! I reckon Boris and I would make an awesome double act! It’d be like The Joker and Harley Quinn and nobody would mess with Great Britain ever again!

Remind everyone but for a cruel twist of fate and a few Rebels, you’d still be in charge and calling the shots…but American bacon would have never come to be. (up side and down side)

Good point, LL. Fate has a way of bringing you just what you need and I’ll take Merrican bacon any day of the week. A turning point in history. 🙂

A few bones to pick :
1. I am also a total gentleman. And an ARMY VET ! I also hold evil lift doors and allow ladies 1st in the chow line. (EXCEPT the BACON line).
2. What the hell is up with the walls of that elevator ?! Does it take you to H-E-double hockey- sticks ?
3. Why are you and those traitors watching football ? Have you not heard of the boycott ?
4. If you didn’t spend so much money in the pubs, maybe you could afford the wig (and a MATCHING mustache ) for your budgie wearing friend in Florida ?
I feel better now. Glad you are having a good time !

1: I have yet to confirm that you are a total gentleman and no, I’m not going to take your word for it despite the fact you find it necessary to hold open the bone-crushing lift doors. Besides, a REAL gentleman would always let the chick get the bacon first.
2: Well, I entered that elevator and didn’t end up in the dark side…or did I?
3: It was on in the bar and I wanted a lemon drop martini and some BBQ bacon wrapped shrimp. I’ll go along with anything to get what I want! Besides, if you look closely at that picture you will see that my new pals have a TRUMP bag so all is forgiven.
4: This is an excellent point. However, I’m saving up for a whole outfit for his next Halloween outing. I’m sure he won’t let me down in donning my chosen attire for him, what with him being such a gentleman and all…;)

Oi, mucker, look closely behind the wine glass on the black bag then! See? I know you do and you’re just being pedantic. That’s another P added to the PPS 😉

Oh. I saw that…but I thought it belonged to your new gal-pal and it said ‘TRAMP’.
My Bad.

You, Sir, are an outrage! It’s a good job I find that sorta thing endearing 😉

Haha! I have a photograph of that exact same wig and moustache set from Alexandria. It really calls out to a person, doesn’t it? Like lovely nightingales at jasmine-scented dusk, or perhaps the eldritch croak of “Cthooooloooo!” by foul and unspeakable fish-man hybrids haunting the long-drowned ruins of a central Massachusetts town fathoms deep beneath the surface of the Quabbin reservoir. But I digress.

I prefer lovely nightingales at jasmine-scented dusk though I did get a chill at the sinister croak of fish-man hybrids…brrrr…:)

I sorta got a whiff of a moth-eaten dime store.
But, I also digress.

I am not clever today.
But I did find Bodie: it’s in the California with a ghost town tag — not much there but memories.

You are exceptionally clever, Goatman. However, I may not understand the American terminology properly – are you poorly? If so I send you lots of Jules special healing rays!

Yes, that’s the place! I must go there since I wrote my Western based there. I was hoping to go this visit but it didn’t happen. I’m definitely going next time. The pictures online of the ghost town are incredible and I’d love to see the place. 🙂