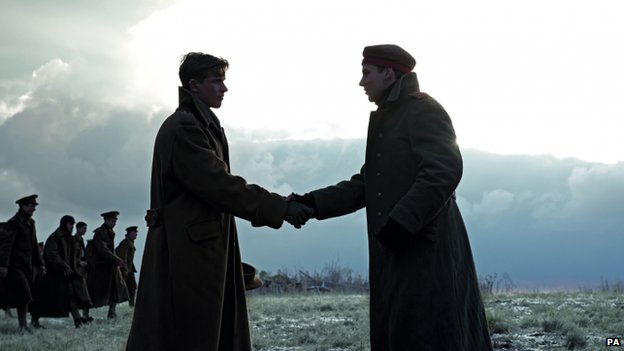 So, I was having a rip roaring night with my cup of tea in front of trashy, reality telly when the worlds finest advert appeared on screen.

Now in this neck of the woods, everyone awaits the arrival of the John Lewis, (super duper, ever so lovely, department store) Christmas advert as it is ALWAYS a sniffle bringer. This year it features Monty the penguin, falling in love from the eyes of a child. It’s a winner. It always is. But then I was all of a sudden and straight away, blown away by another. Interestingly enough, from Sainsbury’s the supermarket. This is a long commercial but I was hooked. The advert retells the story of Christmas Day, 1914 when British and German soldiers came out of their trenches and had a bit of a footy game in no mans land. The supermarket reconstructed the trench scenes with the help of a war historian and the Royal British Legion which runs the annual poppy campaign.

In my opinion it is beautifully constructed, perfectly timed with the WW1 centenary remembrance and it makes you believe in the real compassion of the human spirit. That’s what Christmas should be about, right? Well not to some. The advert has already had a ton of complaints for using war imagery to sell Christmas and, that of a brutal war, where many were pointlessly killed. But then people always find something to bitch and whine about and I think it brings a much better message about humanity than having a whole load of tat shoved in my face that stores think I should buy, like Jesus wanted.

The advert features a chocolate bar that is for sale in Sainsbury’s, at the cost of £1.00p. All profits of which are being given to war veterans. Said chocolate bar is selling at 5000 an hour! Smart marketing that, cos you’re always going to buy something else once in store but that’s also proper generous and makes me feel better about them ungraciously nabbing back half my nectar points this year. Sainsbury’s, you are forgiven.

For those who haven’t had the pleasure, here is the advert:

I believe this was a famous Christmas story that school children used to write essays about. It must have faded from memory if people are complaining about it now. As for the football match, I have only one thing to say – I bet the Germans won.

Yeah you bet they bloody did! On penalties!

I think that my comment dissolved into the ether. So here’s another go: Christmas stories always tug at the heart strings because Christmas is a time of great emotions and nostalgia. Yes, it translates in to commercial successes that end up putting material into landfills ultimately but we love it all the same.

I’m not a Scrooge, I add to the landfills generously.

Yes I agree with that, Larry.
The only thing I shall be adding to the landfill is my apple box 🙂

Did you get the Apple?

Ok, now you need to go to the cell phone store and buy a portable hotspot so that you have WiFi wherever you are.

And you need a proper case for it.

It’s like most things – – have you ever read the book, “When you Give a Mouse a Cookie”? I recommend it even though it’s a child’s book.

Oh you know me so well! Yep, got the pro instead with a nice carrying case that’s a bit arty farty and but of course I have photoshop and a new DSLR. Now I need the WIFI thing but I’m skint and that’s very cruel of you to put that into my mind!
Children’s books are the best! I need to read it.

The book features two characters, a mouse and a boy. Only the mouse speaks; his words are reported indirectly by a narrator. The boy gives a cookie to the mouse. To eat the cookie, the mouse asks for milk. The mouse then requests a straw (to drink the milk), a mirror (to avoid a milk mustache), nail scissors (to trim his hair), and a broom (to sweep up). He then wants to take a nap, to have a story read to him, to draw a picture, and to hang the drawing on the refrigerator. Since looking at the refrigerator makes him thirsty, the mouse asks for a glass of milk, and “he’s going to want a cookie to go with it.”

Ha! Out of simple stories come the everyday obvious. 🙂

Well done, great marketing, I would buy one. Sadly, you don’t see much of that here anymore. The Geemies gott’m!

Hello Brighid, thanks for the visit.

Hopefully Sainsbury’ s will give me some extra points back for helping with their marketing campaign so I can afford a Turkey!

Typically, I don’t like when a corporation ties its product to war veterans. The worst case is here in the U.S.: Budweiser. Selling beer on the backs of our vets under phony patriotism. They should be ashamed of themselves. But I think I can get behind this. It’s beautifully done.

I absolutely love the holiday season (for purely secular reasons). I have a lifelong dream to spend part of one in London. Maybe one day.

I can see why people might find it a little inappropriate to do so but in this case, I think it’s done very nicely with a good message. If The Royal British Legion have endorsed it, then it’s good enough for me.

I love it too. It makes me magically happy and also very reflective.
You MUST have one in London – bucket list!

beautiful. i really want to see that recent film on the Truce. i also want a Nectar loyalty card, they seem so exotic. ambrosia doesn’t taste the same without nectar…*)

I can send you a Nectar card my sweet Phoenix but I don’t think it will buy any Cinnabons. You can lick it though and see if tastes like nectar *)

Based on a partially true story. =) I’ve heard that one, with the Germans and English singing on Christmas. I also heard a story about Japanese survivors of Hiroshima preparing a Christmas choir for an American dignitary who came to visit after the bomb. It’s amazing, the human spirit, eh? I wish our news focused more on the good and inspiring than political idiocy and crime.

The human spirit is amazing when it wants to be. Very inspiring indeed 🙂

Nice one Jules. This is one of those ads that really tugs at the old nostalgia strings. 🙂

Innit though….Go and check out the John Lewis ones…Particularly last year or year before where the snowman goes to get his snowlady a scarf. I nearly killed myself. 🙂

I love sniffle bringers. As for the other commercial… why is it that half the planet suffers (unbeknownst to them) from tunnel vision syndrome? They might want to ask Santa to bring them a brain. One that isn’t empty and disconnected.

Hi Jules. I just had to bitch and whine about the complainers…

Hi Blue. What a wonderful bitch and whine that was! I’m right with ya! 🙂

Ooh la la! Thought all my Christmases had come at once then!

Well, if you hover over my picture or anyone else you will see it is like an electronic business card. See that? It’s called a gravatar. Very easy and free to make soon t’internet and allows you to have your pic and details (if you want) on all social media thingymajigs. It’s cos blogger and wordpress don’t get along well. It’s that competition thing. Now go make one cos I want to see your face on here next time or I’ll have to get my whip out.

I wish Sainsbury’s could have a “lets help Azra move to Bora Bora” campaign… life would be sweet. I’m tired Jules, and that ad makes me emo 😉

What a great campaign. Randy can make the advert starring us looking all emo and staring at pictures of Bora Bora…I think people would go for that 😉 Good to see you my exquisite friend x

Get yourself over! We are SO swapping! It would be a fabulous adventure and experience! yolo. 🙂