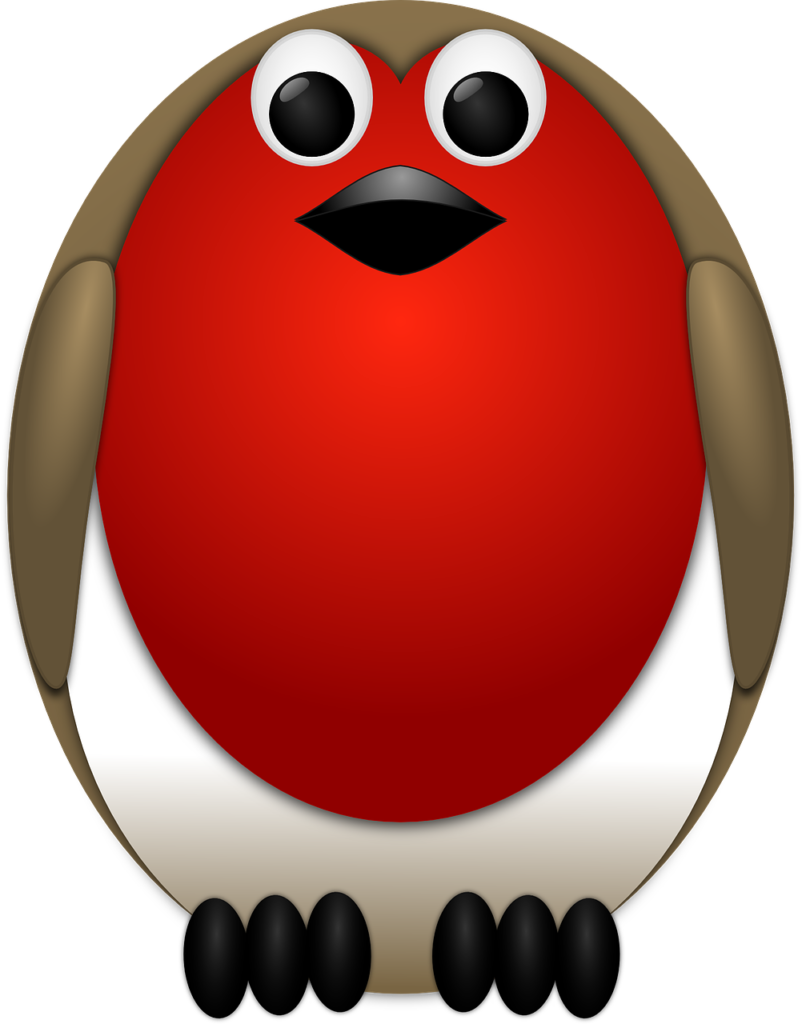 Satirical Snapshots Bringing you Whimsy On A Wednesday!

People say that the best form of defence for your home is a dog. Mans faithful friend is the first to raise the alarm when something is awry. They’re loyal, protective and wouldn’t think twice about taking a chunk out of an intruder. A few weeks ago I would have agreed with this but not anymore.

After placing a bird table and seed feeder in my garden to combat the hysteria in the wisteria last year, I have now created a flocking lot of trouble. All sorts of birds come to my pad to fill themselves up on a variety of “taste the difference” seeds. I have gone to the trouble of making dining at mine a bit of a gastronomic affair. I offer a variety of seeds and nuts which I layer in my feeder like a Rothko painting in order that the birds won’t get bored eating the same thing; it also looks pretty – like the seed version of a mocha chocca latte.

The result is a testament to my ingenuity, bringing along a myriad of beautiful birds to feast at my five-star garden restaurant.

Right up until my new pet arrived…

Robin And His Merry Malice

Allow me to introduce you to my new guard bird – Little Robin Redbreast: 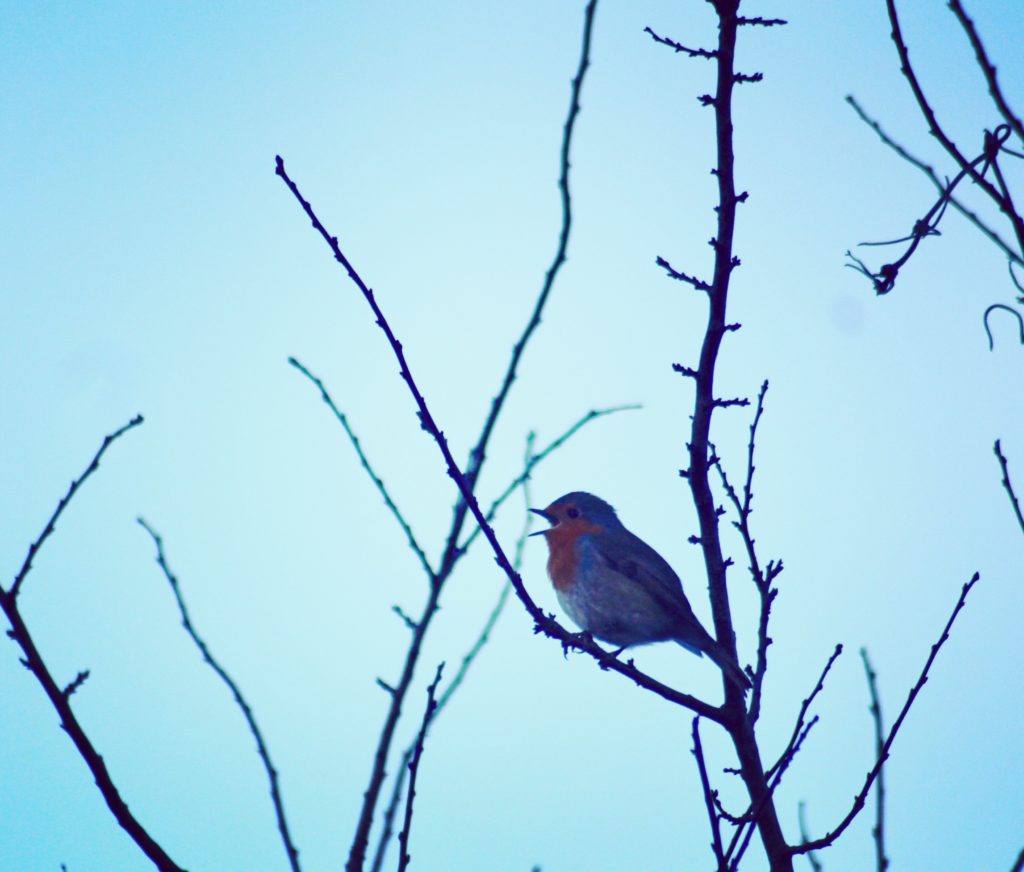 I’m assuming his territorial behaviour is due to wanting to breed somewhere in my garden. This is somewhat alarming as I recently read that robins will nest almost anywhere. Recorded nest sites include plant pots, a pigeonhole in a desk, the engine of a WWII plane, and in the body of a dead cat. Charming.

At first sight, my little red-breasted friend looks like a picture-perfect specimen: he sits in my tree at the back of the garden singing his little head off from dawn till dusk. How beautiful. Nature at its finest.

However, what’s really happening is he’s surveying the garden like a predator. What you think is melodic birdsong is actually thuggish and aggressive cursing in bird lingo threatening other feathered friends of his intent should they put a feather wrong.

If some other bird dares to come and feast or stop for a break on his cherry tree, he has ‘em. I’ve seen him dive out from his branch and chase them off.  He will dart like an arrow across the garden and slam them into the clematis whilst screeching like a banshee at the same time. My robin is so fast that he nearly had my eye out last week when he went after a blue tit. 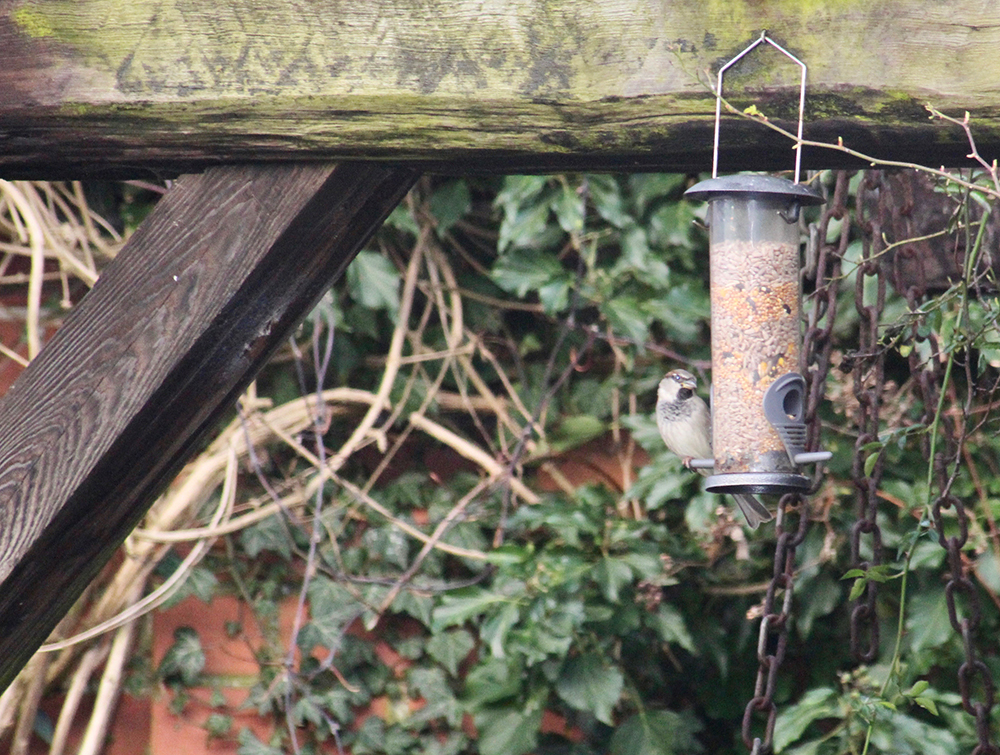 See this harmless little sparrow having a chance feed? That was a mistake. He now has a skull cavity and a bald patch. 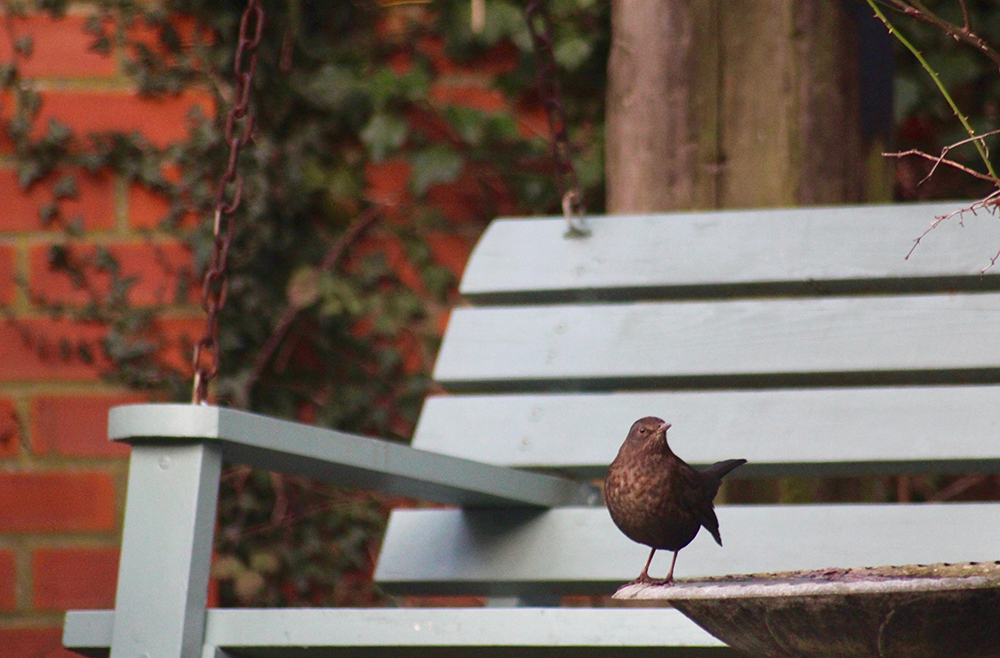 Witness this serene, female blackbird pausing for a bit of a drink. She now has missing tail feathers and has never been seen again. Probably can’t fly due to losing her tail fin and likely falls to the ground like a dart.

Reap What You Sew

I haven’t managed to get any tit photos (don’t even go there) because they are on and off the bird feeder faster than the speed of light, they’re so petrified. And the now grown up baby pigeon that started all this malarkey wanders around oblivious to all this and still feeds on the floor like the village idiot of birds. All because of last summers pigeon fiasco I have to contend with a gladiatorial aviary in my garden.

In order to create balance and harmony in the ghetto, I decided to buy more bird feeders. My logic being that if there was plenty to go around, my ferocious little robin might calm down and learn to share. I hung them in various places all over the garden as he watched from his tree. I even made him some butter and suet seed balls *Plat du jour* and put them on his bird table, because naturally he’s laid claim to that, and he swooped down and ate them. I felt sure that peace would reign.

Now he just darts around the garden like a bloody bullet covering each and every feeding station and I’m going to have to buy a crash helmet if I want to remain intact.

My advice? Don’t feed the birds.

“My advice? Don’t feed the birds.”… there’s a lot to be said for that. You just created another welfare dependent. 🙂

I only put out bird seed when there is snow on the ground. That’s it.

I kind of like him because he’s funny. And I now have bags and bags full of bird seed so I am the keeper of the flock! 🙂

You need a couple of those bloody “magpies”….horrible nasty birds….they chased my robin away …….

“My robin is so fast that he nearly had my eye out last week when he went after a blue tit.”

Don’t go out into the garden topless when it’s cold. Yes, my sage advice is timeless.

My daughter Kelly urged me to kill a mocking bird that used to sit outside of her window and mimic car alarms. Instead I named it Gregory (for Gregory Peck). It enraged Kelly because she reasoned that after I gave the bird a name, I’d be unlikely to shoot it. (yes, we shoot varmints in the US of A). In domestic I use a and air-powered pellet gun but it’s lethal to pests.

It’s unlucky to kill a Robin. Five years of bad luck and a prolonged winter…something like that. I’d find him a girl Robin to hang out with. Maybe at the local pet store and aviary? Nothing preoccupies a man like a sexy bird.

Your wisdomous advice is as priceless as ever, LL 😉

You can’t kill a Mocking Bird! You were right to call him after the great Atticus Finch star! I would love a bird like that because I would while away the hours teaching it irritating noises!

As mean-spirited as my robin is, I’m actually rather fond of him. He has great courage and stamina and we actually sing to each other. Either that or he’s screaming warnings at me and it’s only a matter of time before he has me. I’ll put my top back on incase. 🙂

I had a beloved blue bird named Bogie when I was a child. inherited from my best kindergarten pal Brent who then moved away to Australia. never saw him again. the entire class wept. Bogie lifted my spirits awhile with his snarky singing but he never found his Bacall and he one day perished. left us, too. the entire family wept. now I still have no bird and we’re hoping for another Fed/Nadal classic like last year’s Australian Open Final.

whoa, Anna gives Stevie Nicks a run for her money. but she still ain’t no Debbie Harry 😉 <—winky face

Excellent connecting prose and a great track, my sweet. She is the brunette equivalent of Blondie. We can call her Brunettie. However, she can never top Blondie cos she’s the ultimate Sunday Girl.

I’m sorry about your birdy. 🙁

Here’s the real Cock Robin though – the sort of typical British nursery rhyme your mum sings to you to aid restful and pleasant sleep.I think they call it abuse nowadays. *)

Never been a fan of the Robin.
Always thought Batman could have done better than that.

Maybe Batman will arrive next. That will make for an interesting garden adventure so long as he brings his awesome bike!

Your robin looks far too sweet to be that nasty! Very funny, Jules, I hope he learns to play nicely.

He does, doesn’t he, Jane. People say that about me too. How easily we can be fooled.

I’ve just one question?
What happens to all the birds?!! Xx

Hahaha! You mean all the DEAD birds! I thought about that as I was writing this!

We will never know the answer to this, cakes. 🙂

You said cock. AND tit. Get ready for a load of unwelcomed attention.

How can you be so sure that’s a female blackbird?! How can you tell?!

You know you have to continue to feed these birds, don’t you? They learn to rely on a food source and can really suffer if it suddenly vanishes.

Oh no I will not. People don’t dare do that to me. Not twice.

I know this because I was once a young ornithologist before I got a personality!

What a way to #RuinMaryPoppins! I mean, other than how this probably ruins it:
http://www.imdb.com/title/tt5028340/?ref_=nv_sr_1
But, actually, I have a strange feeling you’ve spoiled one of the major plot twists of the new movie. If it has a plot, that is, other than an explanation of DIck Van Dyke’s dodgy cockney accent.

Hugs to you, BTW! Glad you’re feeling better. Sorry we’ve been such strangers lately, but Gruntessa has been very busy keeping me busy making a living and doing ridiculous things like building greenhouses for recently planted palm trees. Palms are supposed to grow around here, but that was before the climate changed and the Virginia coastal winters have started hovering around -20C all season long. Stupid scientists. What do they know? You’ve got it milder and you’re a lot closer to the North Pole.

Palm trees? Well, a wise man knows to do as his misses says! Yes, we have had far warmer temperatures than you have! Maybe I should start growing palm trees.
#NeverTrustAScientist

What on earth is that Mary Poppins thing all about? A Poppins sequel? Really? What are they thinking…
Sounds dodgy but I’ll have to see it just so I can slate it. #RuinMaryPoppinsIShall.

He has ‘em. I’ve seen him dive out from his branch. Well, good for him. He must have been inspired by my friend Jules.

Hello! Welcome back, my blue friend. I hope you’re not working so insanely now! You’ve been missed. 🙂