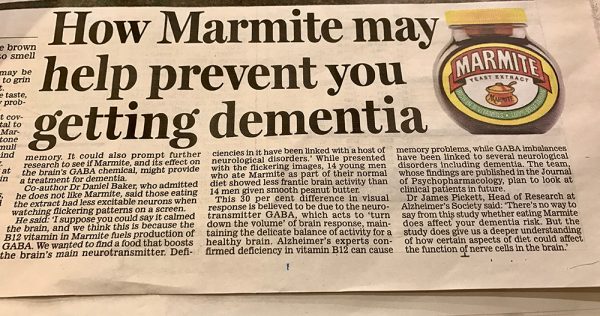 Oh the ribbings I’ve endured from my friends’ ‘the Americans’ for eating this ghastly, dark brown yeast paste! Yeah, don’t think I’ve forgotten who you are. Well, how could I forget? As a staunch Marmite supporter and lover my brain is in fine fettle. Researchers have found that Marmite helps boost brain power and stave off dementia. So, when you’ve all forgotten who you are and what you’re doing I’ll be stealing your wallets and going on luxury holidays at your expense.

A spoonful of sour helps the medicine go down

Just one teaspoon of this nectar each day and you’ll still be playing pub quizzes into your nineties. Why?
Marmite contains 116 times more B12 (which makes red blood cells and protects the nervous system) than peanut butter. So, you might want to think on because my Marmite beats your peanut butter toast down. Not that I’m going to be childish about it or anything but *licks finger, paints a one in the air and then drops mic and leaves* 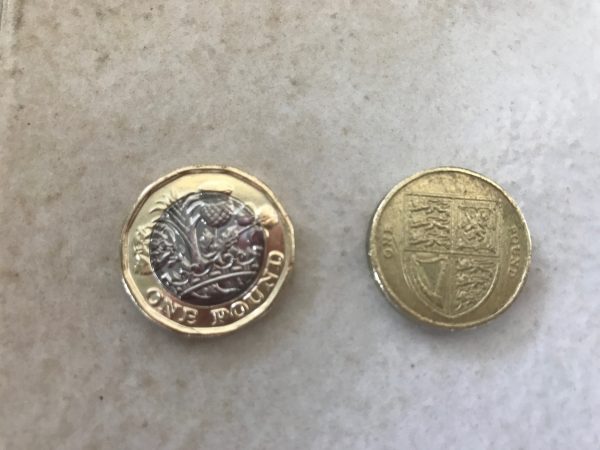 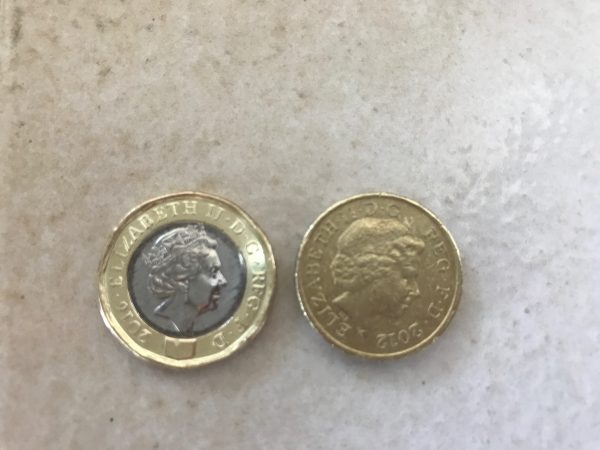 Britain has a new pound coin. Businesses everywhere are going insane at having to change all their machines. I had a moment of dizzy excitement when I thought I wouldn’t be able to go to the gym if the lockers didn’t work anymore. Then I remembered that they used a card instead. How stupidly forward thinking of them. Marmite eaters.

Apparently, this new 12 sided piece is the most secure coin in the world. Question is: Will I be able to shoot it in the US and cause a dent like I did with the indestructible fiver? Take a look here and see.

Talking of Royal Mint and the Queens money.. 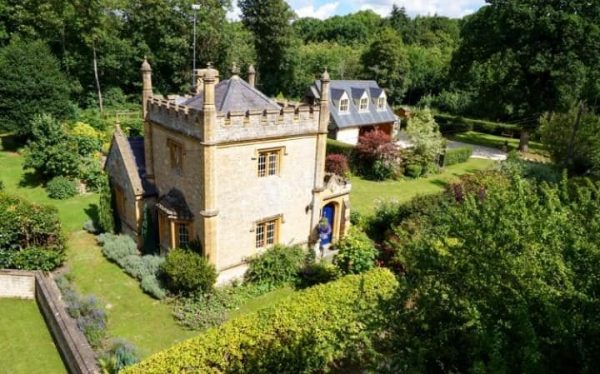 England’s smallest castle has come up for sale and I want it. Set on the outskirts of Warwickshire in the beautiful Cotswolds, “Molly’s Lodge” is available for purchase. Who better to live in a castle than me?
This grade 11 building was constructed in the 1830’s by British architect, Edward Bloor. It sits in 0.61 acres, boasting a beautiful garden, limestone turrets, a Victorian cast iron fireplace and a winding staircase. There’s also a separate outbuilding with an office where I could write my whimsy and a one bedroomed apartment so you could come and stay if you wanted to.

Unfortunately, I haven’t eaten enough Marmite to figure out a cunning plan to snare it and probably only have enough of those gold coins above to pay the bloody stamp duty.

So, I’m looking for a random act of kindness here and I know they exist because it’s happened to me before. Whilst this castle is considerably more expensive than a bottle of wine, it’s a bargain at only £550, 000 and I’d like to live there. Please. A lot. There’s no better way to show your love and gratitude than buying a castle for me.

Marmite is good! I loved it when I had it. Delicious to spread on toast. Now I want some. That castle looks awesome. I’d like on like it as well. If either of us manage to get some delightful person to spring for it, we could share 😉

Marmite on toast is the ultimate comfort food. Wait, marmite AND cheese on toast. That’s it. Marmite is the business. I’m making you an honorary Brit, Tracy because you have all the coolness of America and England rolled up together. Total win.

Even your mouse-gun should be able to put a nice hole in the coin. All you have to do is hit it at 100 yards (or meters…whatever)
You’ll have to do that when you next come to the States. All of your English friends will be absolutely green with envy when you wear a “holey” pound coin necklace. 😉

The castle looks pretty nice…and would probably suit you to a tee. How much is 550,000 pounds in real money? 😉

And that is EXACTLY what I want to do with it, Sol! Make a charm for a necklace or boot lace or something.

Jules, if I had the money, I’d have that castle gift-wrapped just for you.

And do you know what, Blue, I believe you would because you’re the best. And, if I ever go to Bora it won’t be without a spare ticket 🙂 x

I never ate marmite…why am I commenting here?

Who said that the checkers don’t taste like cookies? Can I have some more pudding? It’s my favorite because I don’t need to put my teeth in to eat it.

That castle doesn’t appear to be the sort that would sustain much of a siege. Given the host of suitors you have, there will be bodies dressed in Robin Hood outfits, dead in the heath next to scaling ladders, with knives and swords in their backs. Not that it’s a bad thing. BUT, it’s .61 acres, so you’ll quickly run out of burial space.

The bright side to all this is they you’ll have a really nice collection of swords, knives, chain flails, morningstars, etc. that you take from the bodies of the men wearing green tights.

Ah, but Larry, the written word is most often a gilded, shrouded gift devoid of substance. Chivalrous chicanery is rarely backed up with action.
A small castle is much easier to defend. A trebuchet firing custard pies is all that’s needed. One doesn’t need a lot of burial ground if you have a bonfire 😉

Jules, you’re ever so funny! I could imagine someone like you living in that castle and eating marmite sandwiches in your garden!

Well, you have to find the funny side when you’re me, Jane. Do you know, I can’t think if I’ve ever had a Marmite sarnie. Maybe when I was little and my mother ran out of tripe… 🙂

I can’t believe the castle is so modestly priced! There must be a fella somewhere who would buy it for you, Jules. I should imagine he wears a suit of armour and carries a very big sword. And you may have to dress like the Maid Marian to clinch the deal. But he’ll let you eat as much Marmite as you want – of that I’m sure!

I know! You can barely get a pokey flat in Stoke Newington for that!

Oh yeah, he definitely wears a suit of armour and carries a big sword. He also lives in a fairytale book and doesn’t exist!

Mr. Gorilla Bananas, if all I had to do was dress up like Maid Marian to clinch deals I’d already own an Empire. 🙂

Marmite & peanut butter sandwiches are obviously the way to go.
Our last castle fell into the swamp.

Err…no. Marmite is the way to go, Masher. Peanut butter is a poor contender. You can have Marmite and Monster Munch.

Well ya shoulda got a proper castle on a hill and NOT one made by Barratts! 🙂

He may, and She may but “WeMite” need to discuss Nutella ?
Meantime I’ve got work to do. A house with a turret surely needs a trebuchet!
x ?

Nicely done! I’m more than happy to discuss Nutella, TC. Now you may be shocked by this but I hate Nutella. I’m odd like that. Don’t like strawberries either. Both these things are highly overrated, I find.
Agreed on the trebuchet! And maybe heated up Marmite could replace hot tar! 🙂 x

12-sided? it’s a Dungeons & Dragons die? most importantly the coin is RIDGED

castles are cool. i want to live in a castle. they say they get cold in the winter but that’s what that tiny fireplace is for. even though Azrael hogs the fireplace. but i know it’s not all medieval unicorns and rainbows, there are pitfalls to owning a castle, i’ve seen the Fucking Fulfords.

Marmite is very misunderstood by some. What do they know… Funny vid!

Very D&D that coin. Which will work well in this medieval land, I think.

But little castles stay warm – this is what the Fulfords fail to recognise. *)

I like Marmite a lot, even if it means driving to Waco to get it, like an explorer. And of course you should have a castle, but LL has a point, something larger?

Why do you guys keep saying it’s not big enough for her???? It’s as if you’re saying the lady is not petite enough to fit through the doors! One simply does not question such things. On the other hand, she would need to start letting her hair grow out now if she’s going to Rapunzel any heroes up to the top of that tower. Not that your golden locks aren’t the perfect length right now, as the are… 🙂

Yes Grunt, good point! Are they suggesting I’m fat?! How very dare they! First to be strung up in the dungeon, methinks. That’ll teach ’em how to talk to a princess of the lands.

I think I’m halfway to Rapunzel as I haven’t had my hair cut in ages. However, if somebody pulled it like a rope ladder they’d get a smack in the gob. 🙂

LSP – this is the ONLY reason to become an explorer! Marmite and digestives.

This castle is perfect. I don’t need some gargantuan stronghold. Far too much cleaning and stuff! I’d have to get a maid.:)

Ok, a Marmite cheeseburger might be really good comfort food! If you hold the Marmite! Just kidding. You win, Jules. What good is having tasty food if you can’t savor the memory after getting dementia? There must be something to Marmite after all!

OMG! I think you’re onto something here, Grunt! A Marmite cheeseburger! The mere suggestion is making me salivate. I’m gonna make one! 🙂

I’d totally chip in for your castle if I weren’t currently saving up for an island.

And I respect that sentiment, True nut. In the meantime, give me your Marmite.

I had to Google ‘fettle.’ I’m not so sure about your claim.

What would you do with a castle? You’re too urban for that. Besides, they’re cold and damp. The opposite of you.

Did you get the best job on the planet?

You have to use the word fettle all week now. Also, you must buy some Marmite and eat it everyday on toast for a week and tell how much better you feel afterwards.

You’re probably right, I’d get bored with it. Such complimentary words, M. I feel all warm and dry.

Not yet… yeah, yeah yeah. I got a lot of scam e mail though! Woo-Hoo! (clearly need more Marmite) 🙂