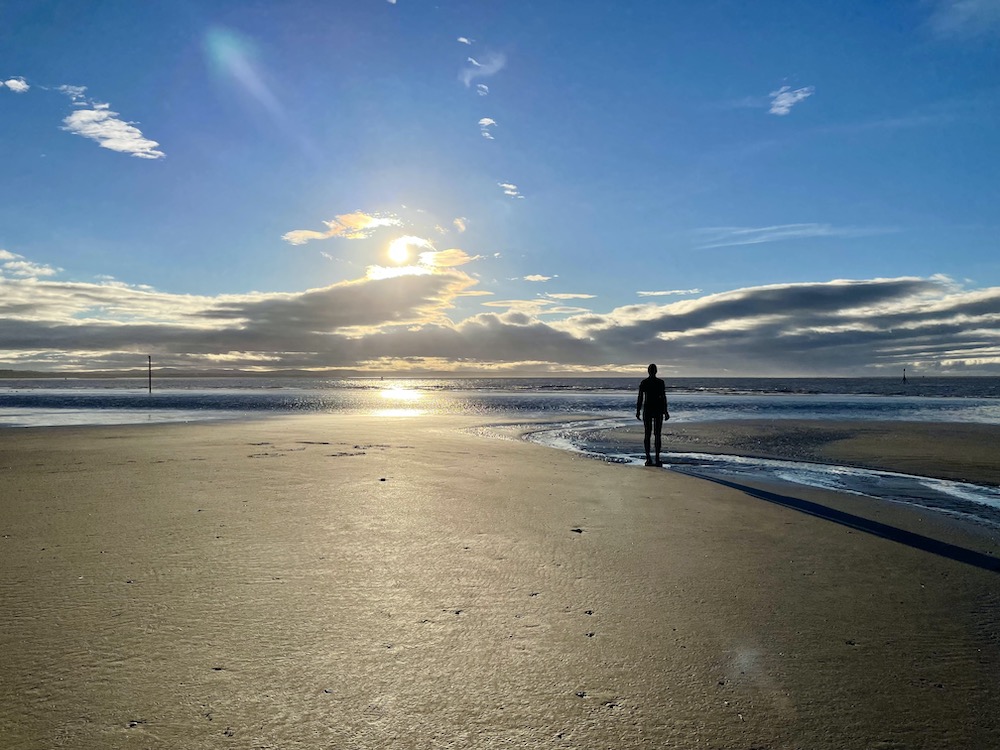 I conquered and survived my trip to Liverpool but it didn’t last very long. That’s because my mother got the Airbnb dates mixed up. There we sat on Friday morning, day two of the trip, watching TV with a cup of tea, yet another Christmas film before we set off to get the big red bus to Penny Lane and other notorious sites.

My mother starts watching Christmas films in September and we all take the rise out of her for doing so. But, it turns out, that Christmas films have a surprisingly addictive quality. There you are scoffing at the start of one, watching it just to bide your time, and before you know it you’re fully invested and imbued with the spirit of magical fantasy. Before you can scoop your sorry arse off the sofa you are now sailing through the next one trying to predict the very predictable ending. Because each and every one of them is the same.

They all start with a woman who has either lost her job or split up with a boyfriend. She leaves the manic city to start a new job and/or gets stranded and arrives in a beautiful rural American town that is the embodiment of Christmas. The little town is full of snow, tinsel and Christmas cookies and everybody is as nice as Disney. Naturally, the woman meets a man there who is much like Captain America, but he rubs her up the wrong way (No! Not like that!) Already you know this is going to be “The One” by the end of the film. She ends up doing something spectacular to save the town and he ends up knocking on her door on Christmas Eve, or bumping into her, apologising profusely for his behaviour and begging her to stay with him forever in his ranch cabin worth at least a few million with his pet dog who also loves her relentlessly.

All the way through these films I imagine how much fun it would be to make a dark and twisted version where it all goes horribly wrong.

I was just describing how I would re-write the film we were watching when suddenly there was a ferocious knock at the door. Let me first explain this house my mother had rented: it was very tall and very thin. Basically, a cut-up Georgian building made into two houses. The kitchen was downstairs, the living room another flight up. Another flight to a landing. The next flight took you to my mother’s room and the flight after that took me gasping, panting and begging for a quick death to my room. Let me tell you that when I came downstairs and realised I’d left my phone charger in my bedroom I very nearly burst into tears.

So, the loud knocking came from underneath where we were sitting but since the property consisted mainly of stairs you could hang over the bannister and shout, “Hello, who is it?”

Turned out it was the man who owned the gaff and he wondered why we were still here because we should have left. As in actually left for good. My mother tried to convince him otherwise, insisting she had rented it for longer. Of course, she was wrong and we got evicted. The next hour was spent racing around and packing up so the cleaners could get in. Packing and carting things down the very many stairs. I had to ring my mother’s current husband and inform him of the news as he was out having a flu jab and she didn’t dare.

“You know last night when I said, ‘That’s so my mum though,’” I said over the phone.

“Well, this is one of those moments. We’ve just been evicted so you’d better come home. We gotta get a shift on.”

It was hours before he could look at her never mind talk to her again. 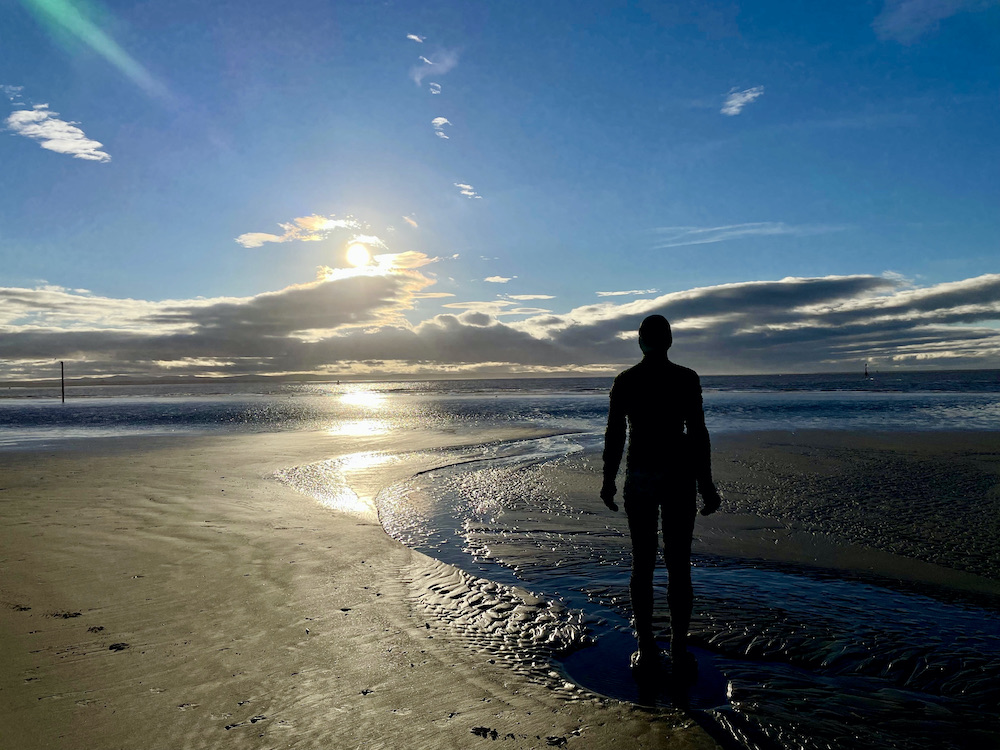 The only thing I really wanted to see was a load of iron men standing on a beach. This sort of madness appeals to me much like cast iron manhole covers do.

We hadn’t been there yet so I begged to see them before I set off home. After a long and blustery walk to the seafront, I witnessed the iron sculptures by Antony Gormley on Crosby beach. Based on his own naked body (bit narcissistic) the figures are revealed and submerged as the tide ebbs and flows. I must say I found them rather fabulous. 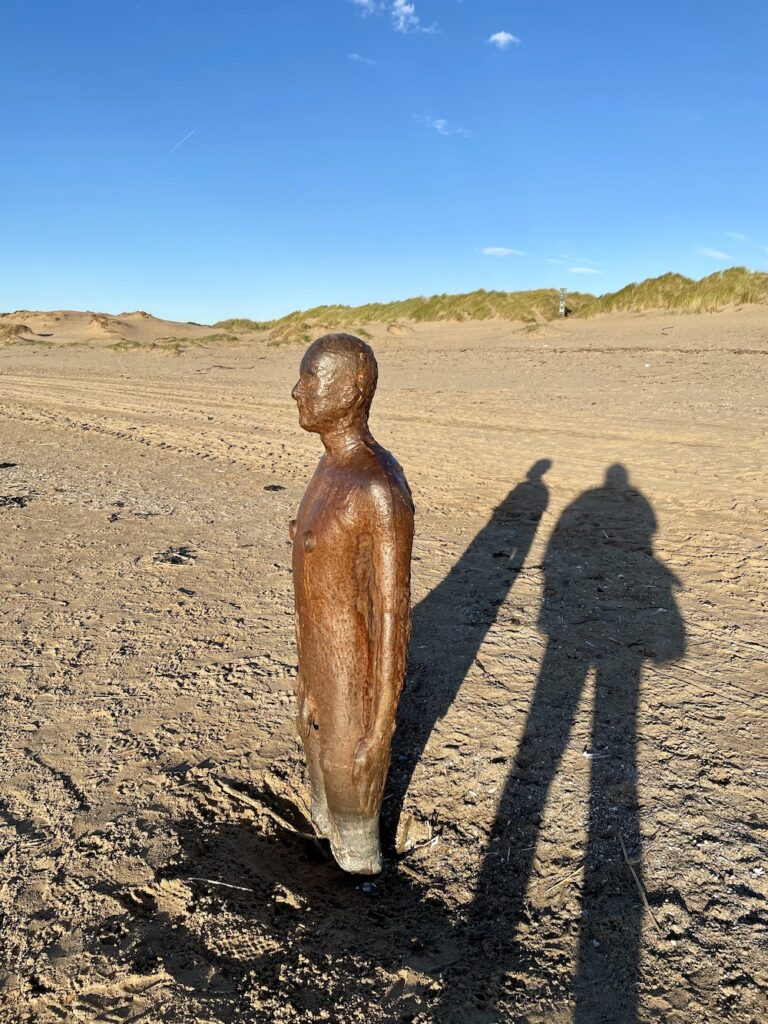 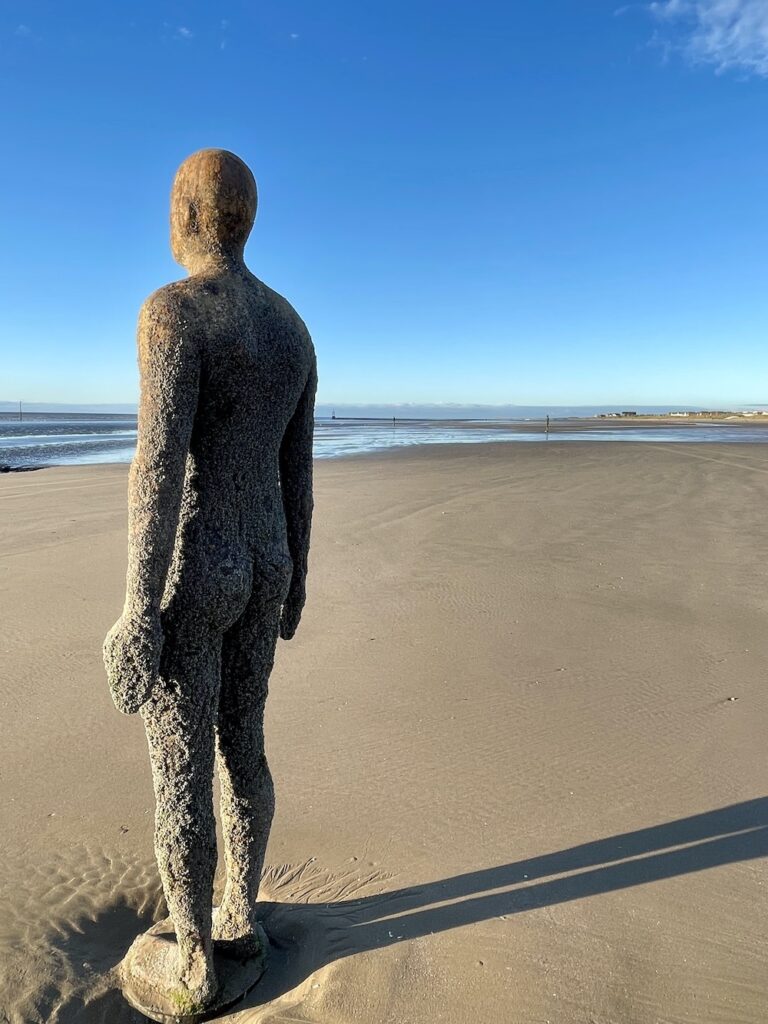 If I could have picked one up and taken it home I would have. Just so I could dress him up for seasonal holidays and upset the postman.

I hope that you were still able to salvage the holiday. Besides the iron men.

Oh yes, the evenings were made up of gin tasting and lovely meals out. Also a trip to the opera building, the Christmas market and Quirky Corner! 🙂

Your mother maybe as mad as a tree sometimes, but she regular provides you with at least 500 words. 🙂
Can I borrow her for a couple of days?

I saw one of those Arthur Gormley iron men statues when we went to Edinburgh. He gets about, doesn’t he?
Hope you enjoyed your break, despite everything.

Current Husband???? How rude!!
You didn’t mention the gin tasting, Quirky Corner, copious wine and lovely meals that we packed into the two days!! Not to mention the thousands of steps we walked. Yes Masher if you’re brave enough you can borrow me but I warn you I’m a bit of a challenge

Be careful what you wish for Masher…

She’s way more that a bit of a challenge.

three words: cabana boy lessons. isn’t all art narcissistic tho? those Sandmen remind me of a Doctor Who script that was never finished…

we have those movies over here, they’re called Lifetime Movies. or Hallmark Movies. and now The Food Network has debuted their first-ever scripted drama, a gooey Christmas movie starring Ree Drummond. there’s something about Ree Drummond, she just kinda………makes me feel uncomfortable…

if we collab’d to write a Christmas movie it would end thusly: the woman is of course a witch who turns it into a Halloween town, the man disappears suddenly without a trace, and we tight-shot in on a circle of wolfits all with smiles on their faces licking their lips, roll credits

No, I don’ believe that all art is narcissistic, my sweet. Sometimes it’s just art for art’s sake.

There’s a great Doctor Who series there or even a Tales Of The Unexpected. Oooh!

That’s it – Hallmark movies. Over here a Christmas movie comes out every now and then and usually has an awkwardness about it and features John Cleese.

Yes, I like that idea. Christmas needs a touch of reality! *)

Oh my, “cut up Georgian.” Surely there’s some kind of law against that? But I’m with you, neat beach sculptures; take one.

I think they’re marvellous. Just imagine one standing on your front porch!

Julies you certainly captured the ridiculous picture the media tries to paint this stupid holiday into. Then we sit here wondering why our Christmas isn’t so magical! Bah!

If I was casting statues in my own likeness I would make a few improvements. Doesn’t appear that he did :).

Haha! Yeah – he didn’t think that through did he?

I love Gormley’s work. He did an installation in Manhattan’s Madison Square Park, including placing a few on surrounding roofs. Some folks were unaware and called the police to report mass potential suicides.

I agree – his stuff is brilliant. Ha! That’s hilarious! Nice to see you back in the blogosphere, Exile. Are you writing again?