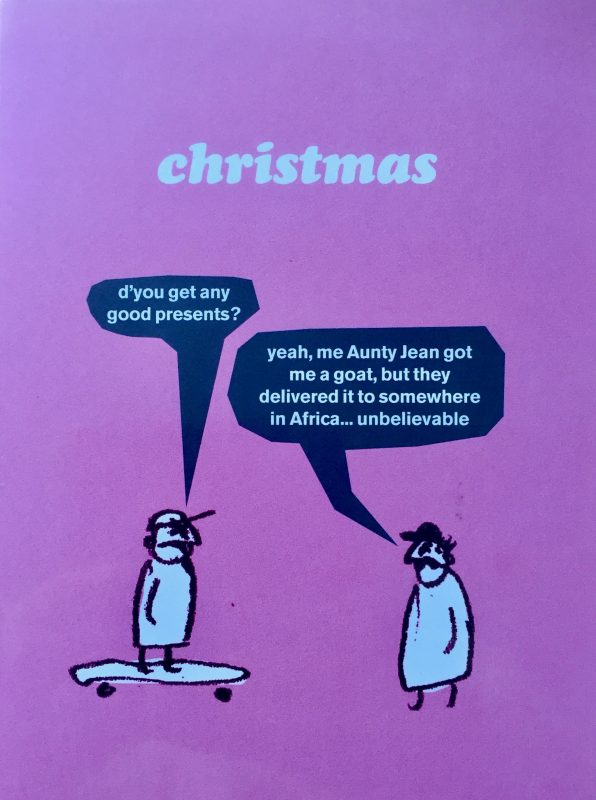 Satirical Snapshots bringing you whimsy on a Wednesday.

I’m never organised. Less so this year because I’ve been galavanting and doing my usual “Oh it’ll be alright..” thing.

So, some bright spark in my cluster of friends and famalam decided to start a FB Messenger group chat including all those that we buy gifts for. Everyone had to put up their lists of wants and the others pick secretly from them and inform the rest of what they’ve bought for he/she.

Simple right? Not rocket science. Unless you don’t follow the rules. I hate it when people don’t do that. I have followed this set up to the tee making sure I tell everyone what I’ve bought instantly which is very complicated: I’m having to pull up Facebook in the middle of a busy, boiling hot shopping centre whilst people bang into me or ask me if I want a Big Issue. “No mate, already got one. Got several in fact. Called family and friends.”
I’m having to type into my mobile phone which has a smashed screen and therefore doesn’t always respond to touch typing (Imagine my joy) whilst nasty carrier bags, that I have to PAY for, loaded with swag, cut into my fingers. I’m having to start new FB group chats so the said persons I have purchased for remain in ignorant bliss as to their surprise present. Even though it’s listed and isn’t really a surprise. I now have several FB group chats breeding like rats on a council estate and have to scroll down endlessly to find the right one so I don’t give the game away.

And everybody else has made it go tits up by NOT COMMUNICATING. Thus, we now have duplicated presents. And this seems to have backfired on me more than anyone else despite the fact I’m the only one doing it properly.
I struggled to come up with much of a list and the things I initially put up like Aston Martin driving stunts or shooting lessons got rejected. In a moment of frustration I went and asked for a book on crocheting. I know. I don’t know how that happened. I think it was after watching ‘Kirstie’s Homemade Christmas’ and falling into the ‘Arts and Crafts’ trap.

Well guess what happened? Everybody took the right royal piss out of me and then all went and bought me a crocheting book. On purpose. Apparently I have several. I responded to this with “I’ve changed my mind, it was just a passing fad.” However, there are are many book shaped presents under the tree with my name on. Since it is I who is cooking Christmas dinner, the last laugh will be mine. I also don’t forget and next year when they open their crocheted toilet roll dolls, I shall be hysterical. 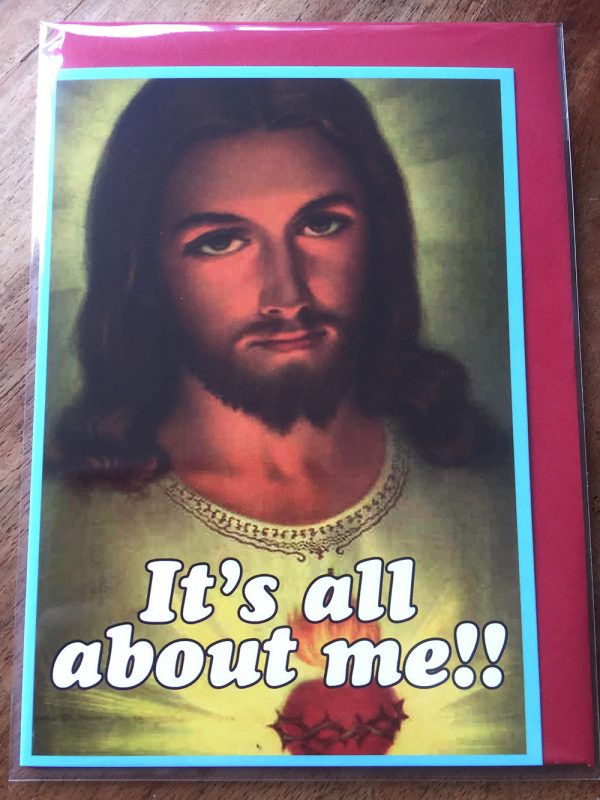 I don’t know if it’s the above stress and frustration or I’m emotionally unstable but I have a real issue with Christmas cards this year. I didn’t recognise this until a friend of mine pulled into my drive and saw me opening one at my mailbox which is cunningly situated right above my recycling bin. She witnessed me opening the card straight from the mail, reading it, tearing it in half and putting it straight into the bin.

The thing is, I’m not sociopathic or anything, not entirely, but some cards irritate me for the following reasons:

*They are paper thin and start to curl at the edges if left on a windowsill near cold air and central heating. This makes them fall down constantly and cause stationery chaos.

*I could put them in a card holder but I broke that last year by shoving too many cards in it and nearly set fire to the house when they all landed in my Christmas Yankee Candle.

*I don’t like the pictures on some of them. As an art philosopher, I am very particular about this subject.

*I don’t know who you are because I haven’t seen you for donkeys years and you’re only sending me a card through repetitive nature and not because you care. I’d prefer you to buy me a drink.

Ergo, I’m having a card crisis and unless I know you well and love you dearly, please don’t send me one. This year, I am not sending any because I haven’t the time or energy and instead will be donating this money to the AA fund.

I know this will disappoint many people as I tend to send amusing cards filled with excessive confetti and glitter that falls onto your carpet when you open them. I will be honest and say that I will miss the stream of hate texts I receive from my friends when my shiz makes a mess on their carpets.

Fluffy and the shaved pussy

It could be worse. At least I’m not as mean as these people. 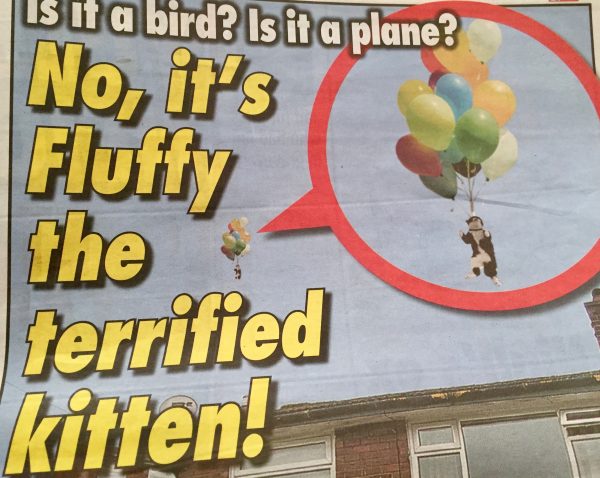 A little horror sent his kitty, Fluffy, rocketing back to Santa via helium balloons because he wanted a puppy instead. Nice.

But, turns out the flying kitty might have had a lucky escape. More horrifying news from this end is that the Brits are having their emotions toyed with what with us being a nation of animal lovers. Puddy tats are being stolen from the streets and not just by your local takeaway. No. A dodgy gang of Manc lads have taken to stealing our feline friends, shaving them and selling them at a Salford market claiming they are real life Gremlins from China. People have gone Grem crazy and the entrepreneurial Manc gang are said to be supping up their profits at a two star resort in Benidorm. However, there is great unrest on the streets of Manchester as Trading Standards have been inundated with furious punters who realised they’d been duped when their Gremlins fur grew back. Apparently this has sparked a serious bout of Tourettes. 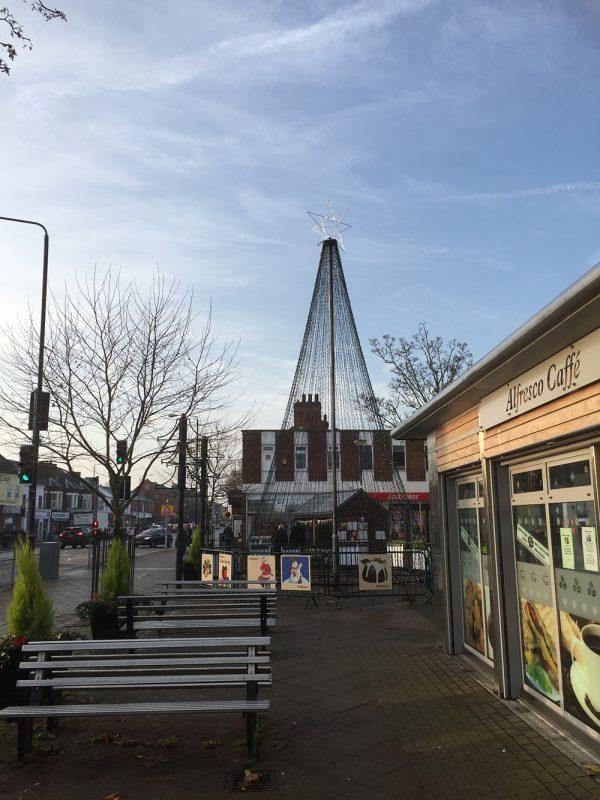 In the suburban haven where I reside there is a community Christmas tree and a nativity scene. Lets talk about the tree first. 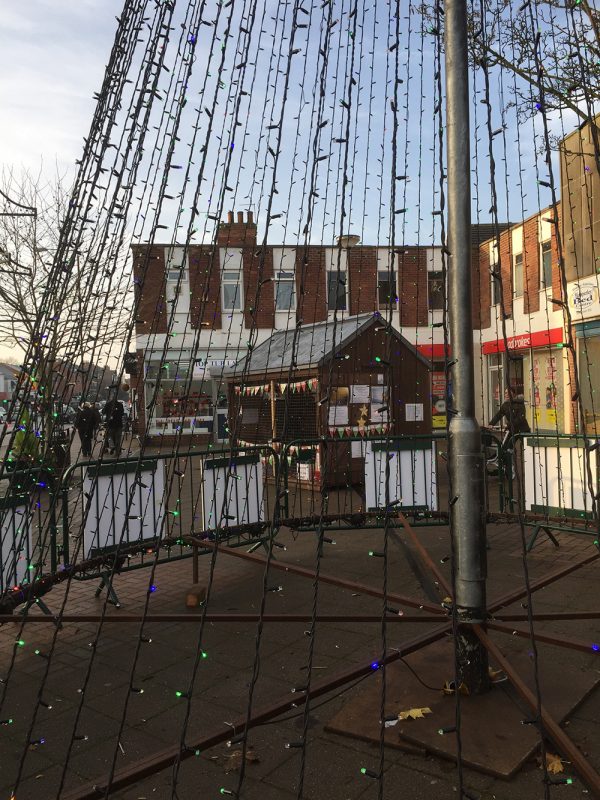 This, people, is the modern world where instead of a nice fir decked with baubles we now have something that looks like a playground swinging frame. I’m sure that many a half cooked drunk coming from the nearby pubs may have mistaken it for such and I am surprised it is still standing. 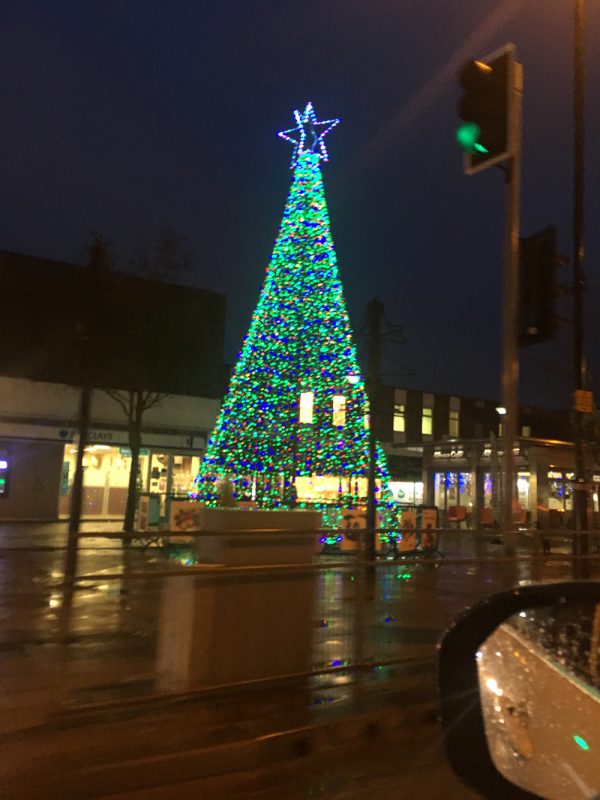 Whilst it looks passably festive at night, it still isn’t a tree, dear local council, but a pound shop version of the real thing. HELLO! WE ARE SURROUNDED BY FORESTS! I’m refusing to pay any further council tax.

Secondly, there is a nativity scene set out with life sized members of the crew: Wise men, shepherds, Mary and Joseph, animals and of course, baby Jesus in a manger. Now this has been around for years but, as those years have passed it has changed considerably and started to resemble the tragedy that is todays world.

One in A Fountain one in a bar

The three kings got hijacked one year and ended up in various, dodgy places. The year after someone with a severe bout of post natal depression stole baby Jesus. What finally put the clappers on it was when a mother and small child went to visit the nativity scene. The toddler sat in her pushchair looking at the beautiful Christmas Story as hymns sang out from the makeshift shed. All of a sudden a tramp sat up from behind the manger, covered in straw and belched really loudly scaring the living daylights out of the child and traumatising her for life. Since then the council have had to chicken wire up the front and keep it simple. 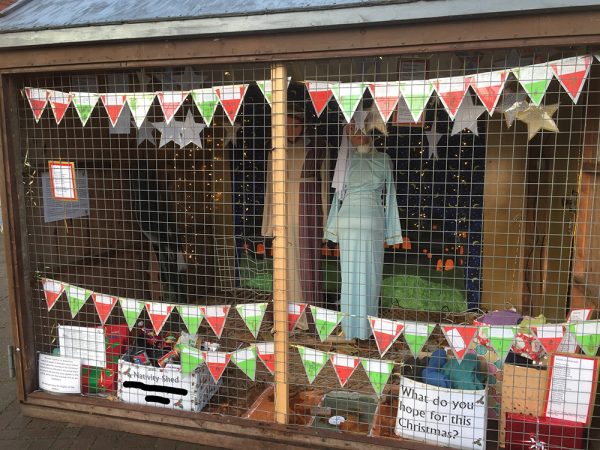 As you can see Jesus hasn’t even been born in this scene and Mary is sporting the finest maternity wear from Primark; thus the rest of the holy entourage don’t need to be present.

Believe it or not I live in a very nice area even though this looks like a scene from the ghetto.
Falalalala -la-la la-la.

Grems. I laughed, out loud. There’ll always be an, ahem, Gunchester. And nice Sovbloc tree! ‘Tis the season to be merry.

Am feeling a bit bah humbug myself this year. Not down or anything, more like indifferent. I’ve done several mood checks and all seems to be mostly well, just not overly excited about the holidays this time around. Maybe next year eh? Meh lol.

Must be something in the air, my lovely friend. Yes, certainly indifference.

Got your message – any night from tomorrow – whatever suits. xx

Never have I felt so outraged at the sight of a shaved pussy. I just hope they used a hair clipper and not hot wax. You seem to have a problem with hooligans – If I were in charge of your Council I would hire a few bouncers disguised as Santa to protect your shrines and monuments.

I felt the same way, Mr. Gorilla Bananas. It’s a good job I was sitting down.

What an excellent idea! Bad Santa’s!

Better a playground swinging frame than a freshly butchered and murdered fir. That’s what I always say.

The nativity diorama asks a good question: What do you hope for this Christmas?

An Aston Martin. I keep asking but nobody’s listening… sigh.

The rotary club will be putting Santa in a cage next!

Mind you, have you seen the Rotary Club Santa? I wouldn’t blame them!

Hey Jules, I didn’t get my invite to the FB Messenger group.
How are you going to know what to get me?

I thought you wanted some new pants, Masher?
Got you some with an appropriate superhero and slogan.

No, no, no. They have to be from Bloomingdales.
In New York.
It’s my little peccadillo.

* i tried to sign up for facebook but they said i was fake news and deleted me.

* yes, brilliant! put the card in a bottle so it’s a message-in-a-bottle but the most important thing is to fill the bottle with a drink.

* cats were never meant to fly. it’s still a mystery how they get up in those trees.

* don’t feed those Grems after midnight.

If you feed the Grems after midnight they learn to fly!

Now that’s what you call a drummer boy. *)