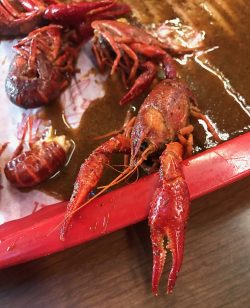 In order to advance my palate ready for a trip down south, I got taken out for a bucket of crawfish. Apparently they’re in season.  The place I visited was called The Rajin Cajun. 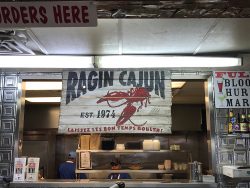 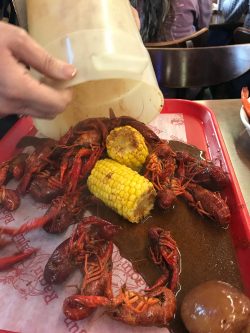 A whole bucket full of these little blighters got tipped out onto a tray and put in front of me.  I looked at them to see if they were still alive.  One of them was looking at me suspiciously.

“Now you have to pull off its head,” said my Fairy Godmother.

“Look, this is why I go to restauraunts so I don’t have to do this and they do it for me.  I cant pull somethings head off.”

“Yes. You. Can.” Fairy Godmother replied, trying next  to encourage me by making one of them dance in front of me. 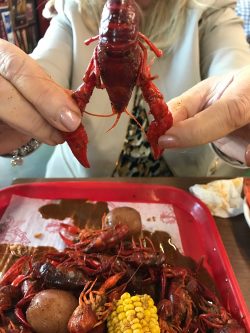 Well, I tried.  What a bloody palaver.  I couldn’t pull its head off because it was stuck on.  When I pulled its tail off, brown gunk came out of the things body.  That was it.  No.  Not even with a knife and fork would I do this.  I ate the corn though.

The following day I got invited to a very posh house in a very lah-dee-dah area.  The event: a cookery class with ladies who don’t have to do anything because they are married to husbands “in oil”  From what I could glean, they spend their time learning to cook an array of amuse bouche, changing the French language to American and getting stressed about organising their closets.   It’s all very difficult.

The kitchen of this lady’s house had the same footprint as the entire ground floor of my pad in England.  I very nearly got lost.  We were taught by a master baker from Central Market how to mix, pipe, bake, fill and decorate a Macaron.  These are called Macaroons in Texas because they can say it however they want.  Naturally, I corrected them because I had to gain superiority by having a lesser closet.  I also demanded tea in a china cup which I got because this kitchen had everything.  I drank it with my little finger sticking out just for kicks.

I beg your pardon?

What in God’s name is Snickerdoodle?

Turns out, it’s some sort of cookie.  In my case it was one of the fillings for the beige Macarons.  I squirted some in my mouth from the piping bag ( English class) and decided that whatever it was, I liked it.  Better than crawfish.

As it happens, I excelled in Macaronessing and didn’t get barred despite writing “Bonjour” with edible Sharpie pen on my lil’ French cakes. 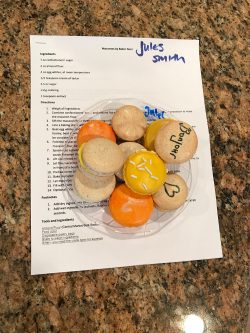 Life is Good and it’s getting gooder

I got invited to Int’l Texas Cowboy Church to celebrate  Pastor R.O Murray (total legend) re-affirm his marital vows with his wife, Laurie, of 50 years.   As usual I got called up to the stage and received a beautiful gift of the Cowboy Ten Commandments.  I don’t know what they’re trying to say.. 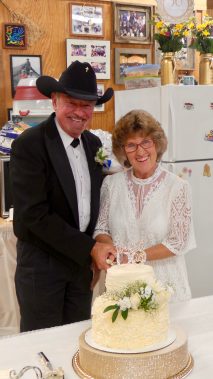 I LOVE these people.  They’re like famalam to me.

It is traditional for the newly weds to feed each other the first piece of wedding cake.  In England, this would start a food fight.

The blessing was followed by exceptional BBQ, beans, pies and cakes.  I am a massive fan of American beans with apple and bacon.  Proper nice.

These boots were made for walking

My favourite pair of cowboy boots had to go to hospital.  Yes, in the land where the bewwts are king, there is a hospital for them.  I kid you not. 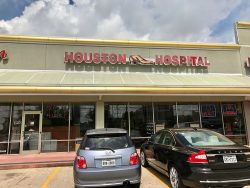 My matter was taken very seriously.

“My boots are dirty.  Can you clean them and make them all beautiful again?” I asked.

“Let me see,” said the surgeon.  ” Ah, what are all these marks and blemishes?”

“They’re scars from all my adventures.”

“You leave them with me, pumpkin an’ they’ll be good as new,” he said with the most excellent  bedside manner.

He kept his word and I was so pleased that when I fetched them, I put them straight on to go out for a meal.

Well that was a colossal mistake because the numpty of a waiter spilled a whole bottle of beer over them within ten seconds.  Brilliant.  Back under the knife they go…

I didn’t realize you were still hoofing it around the country. Yeah, I’m not a fan of crawdads either, but it doesn’t sound like they were cooked right in the first place. Way to be brave. And snickerdoodles are my all-time favorite cookies. Mmm…

Hey, Crystal!
Yes, I’m still hot footing it around the states. Not a fan of crawfish unless they come peeled in a prawn cocktail and smothered with thousand island dressing.
I’ve yet to have a Snickerdoodle cookie but if they taste anything like the Macaron flavouring I’m going to like them. 🙂

The Radiators have a song about eating crawfish: The lyrics run like this – “Suck the Head, Squeeze the Tip” and the lyrics are the title of the song. https://youtu.be/6-5HHscqzHE. It’s instructive.

I’m happy that you’re indulging fully in Texas culture. It will come in handy when you buy a ghost town and make it cool once again.

Larry, I’ve just found out that there’s an old dance hall for sale near Round Top. http://www.ksat.com/news/famous-texas-dance-hall-for-sale-on-ebay
Current bid is at 6 k. I’m sorely tempted. I could restore it into an art paradise with dancing lessons and live music! 🙂

To do it right, you’d have to construct a BBQ shack (literally a shack) next door, serving really good BBQ and ice cold beer. Behind the place (on the South 40) you construct a rifle range and eventually a Cowboy Anglican Church (pastored by LSP) where hell fire and damnation is pounded down the throats of sinners – pounded like a cold beer on a 110 degree Texas afternoon.

Then you get http://www.foodnetwork.com/shows/diners-drive-ins-and-dives (Diners, Drive-Ins and Dives) to do an episode about your dance hall and BBQ joint. That will pack the place with people.

Somebody has landed it, I’m too late. Ah well, back to Blighty where I’ll buy a disuesd chapel and start clown church. Back to the original plan!

The UK seems to be more unhinged recently than I’ve seen it in many years. I was there when the IRA was bombing things and the attitude was very different than the way it now that they’ve embraced troubled Mohammedans. You might be better off doing a clown church in Texas than Nottingham.

Actually, maybe I should be clown PM.

Exactly, Theresa. Far too much hassle for a tiny bit of meat. Life’s too short.
I shall make you a batch on my return and we can eat them with Hurricane cocktails! How exciting! 🙂 xx

Technically, I don’t think crawfish are fish. I think they’re a crustacean. And you had the proper response. They’re disgusting.

I think they’re disgusting too, M.

Those beans are something else. Melt a bit of Cheddar on top and there’s a winning dish.

Very funny as usual…
Glad your having fun. Have you tried rattlesnake or gator yet? Ain’t bad.

H, I saw alligator on a stick yesterday. Nasty. There’s no need. And rattlesnake? Ewww. No. Not in my lifetime. 🙂

Those seafood critters look like Crayfish to me. They must call them ‘Crawfish’ because they got stuck in someone’s craw. You were right not to pull their heads off, Jules. You won’t get the respect of your hosts by being a mimic. You should have bitten their heads off and said you preferred them raw. 🙂

They call everything something different over here, Mr. Gorilla Bananas.
I will bite somebody’s head off if they feed me that vile concoction again.

That tray of yuckfish looked disgusting.
That ain’t proper nosh, not like what a refined bird such as yourself should be offered.

When your invite to go into the jungle comes along – as it surely will – Ant & Dec will be guffawing their little Geordie heads off, watching you try to eat kangaroo bollocks with a knife and fork.

Right, Masher. How dare they expect me to eat such a thing!

And I’m sure if that happened, you’d be on your phone the whole hour voting to make sure it was I picked for the challenge! 🙂

the difference between lobster and crawdad? one of them is your father

I always go for the corn, too. but for me the smaller a corncob is sliced, the weirder it gets

Amuse Bouche, they were good when they were a college band but then they sold out

instagram got me with the bath bombs but not the macaroons

your handwriting is hot. your penmanship is sexy. I’m a sucker for the ancient art of writing

They were a great college band but their music was too Haiku.

I think it’s time for the Macarons to get an insta mention. Find the emoji!

I too am a sucker for the written word and all things stationery and stationary. Though that’s not good for boots unless they’re in hospital. *)

+I have had crawfish from the Columbia river in Oregon and don’t remember having to de-head the critters. Must be a Texas thing to sicken the visitors.

I think it”s a Texan joke for sure, JL. A very nasty one.