November 3, 2010 10:39am Published by Jules Smith in The Art Philosopher No Comments 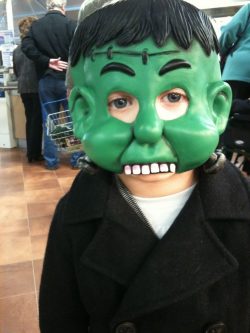 This is my friends little boy in a Frankenstein mask…ahhhh…isn’t he cute!! Even funnier was when we introduced him to Frank and then Frank left the room and he said “Where has Frankenstein gone?”  Out of the mouths of babes!   On this note, trying to explain ‘Halloween’ to a Chinese man is incredibly difficult!  It isn’t in his dictionary as it is an American festival and trying to explain why we all dress up like monsters and knock on doors for sweets left Frank bewildered and I think a little bit scared!  So, we decided to take him along to a friends Halloween party.  Frank was looking at everyone in costume and declaring “Ah Ghrost  festival, ah very funny!”  We let him drink mulled wine and eat pumpkin soup and take photos of every single person he met.  Outside in the garden the hosts had made a fake cemetery.  Frank thought this was real and asked that I take a photo of him looking very respectful next to a grave stone reading ‘Rest in pieces’ it took a while to explain that it wasn’t real and even longer to try and explain why it was just a bit of fun.  Anyway, Frank became as popular as ever and made many friends (not that he’ll ever recognise John the werewolf again if he meets him on the street) and collected many e mails much to his delight!  Now I’m trying to explain Bonfire Night which is also proving difficult and making the Brits sound like a right bunch of nutters!!