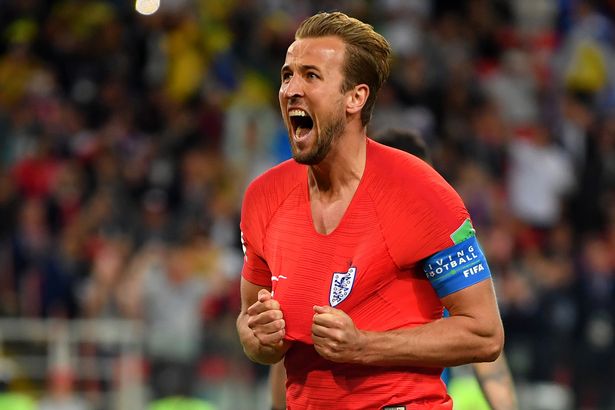 Satirical Snapshots Bringing You World Cup On A Wednesday!

What can I say?  Not a lot actually because I’ve about lost my voice.  You’re lucky I’m here because last night I nearly died of heart failure.  Talk about stress…. 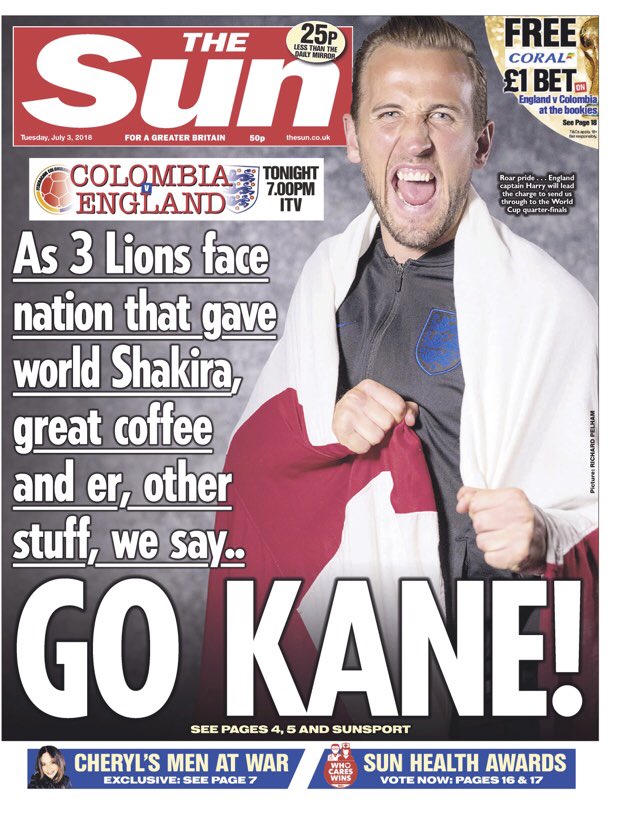 What a bunch of skanky cheats the Colombian players were.  Even their coach knocked into Sterling as he walked off the pitch at half-time. Wow. What a great role model.  But guess what, Colombia?

YOU ARE GOING HOME! 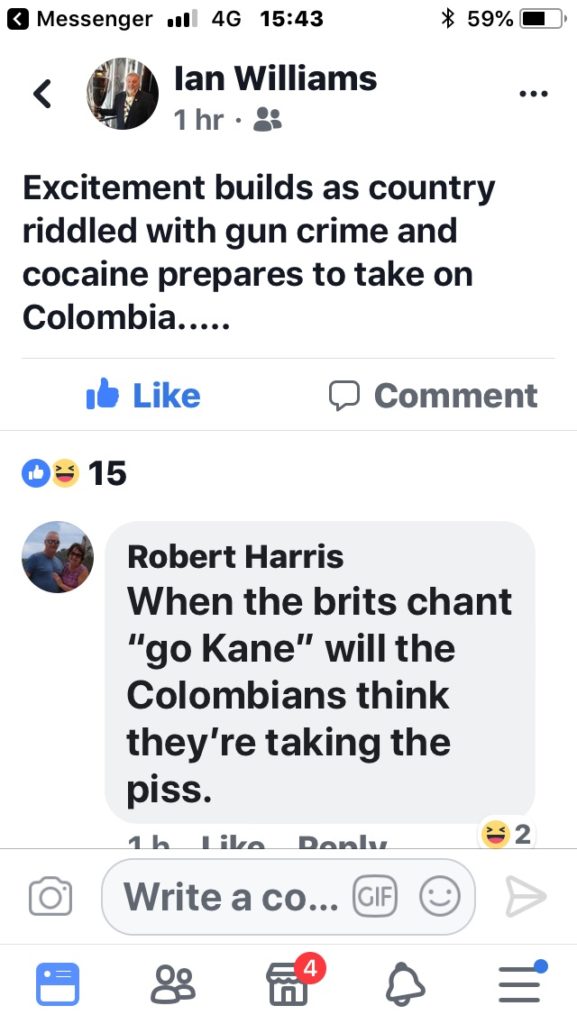 Apparently, our English sense of humour upset the Colombians. 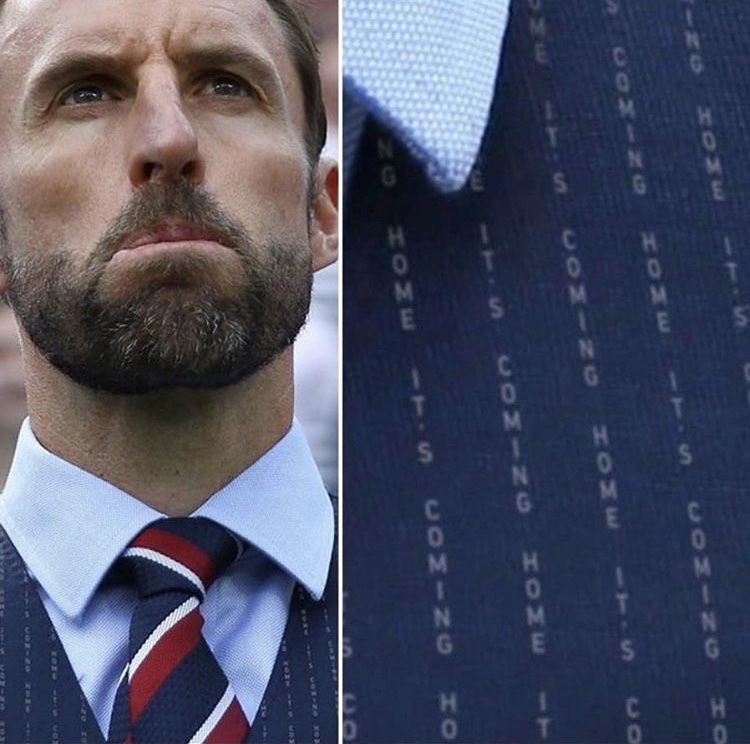 And on Saturday England will be  playing Sweden in the quarter-finals.

“I mean they couldn’t hit an IKEA door with a hammer” -Gary Lineker on Sweden. 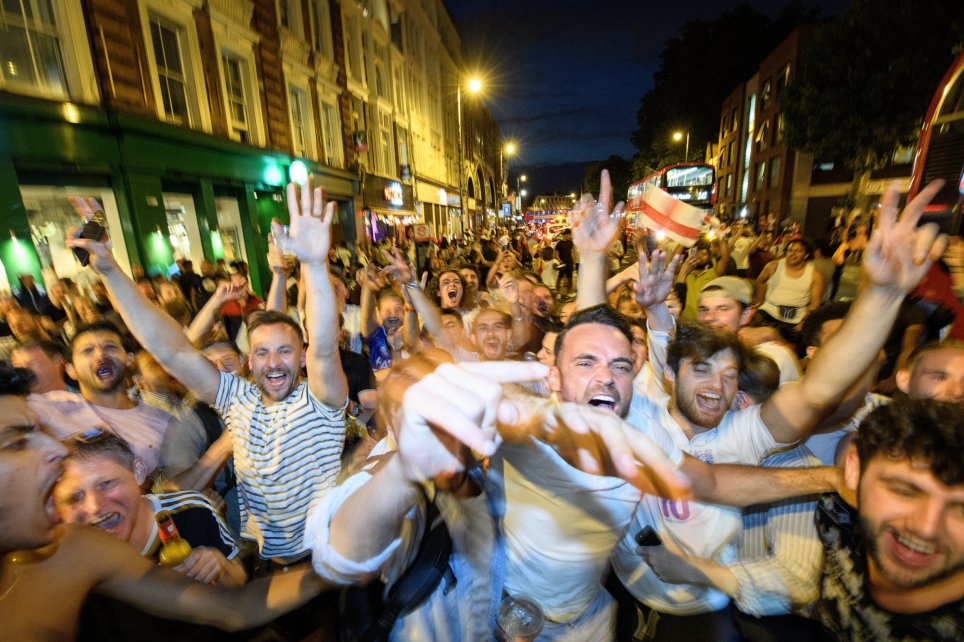 As you can see, we are a tad excited.

Do you project that England will WIN the World Cup? I need you to handicap this for me in the event that I decide to throw some of my hard earned money down on the outcome.

Here’s my prediction for Quarter finals:

Brazil will beat Belgium (though Belgium are a dark horse)

Croatia will beat Russia (Though the Ruskies knocked Spain out so, ya never know…)

FINAL: England v Brazil – I just asked Kevin and he said England. I love this kind of loyalty. Put your money on us, Larry cos if ever England had a chance since 1966 it’s now.

Hope you guys win this.

What happens, Nox? Complete and utter mayhem and England coming to a standstill for about 5 days.

Yes, there will be unicorns, rainbows, magic glitter and world peace because everybody here will be as high as a kite and full of love. That is also code for -yes, drunken Brits everywhere. Well, English people. We are far from united at this point! Beware the ex-pats!

Anyone who eats pickled herring doesn’t deserve to win anything. ;P

I’ve just heard that beer in Sweden is around £6 a pint. In England it’s around £4 a pint. BUT in Russia beer averages 73p a pint (not to mention the cheap vodka) so I’m guessing Saturday will see fans in Russia totally smashed with joy or obliterated with sorrow for less than a tenner!!

When England played Belgium (which was basically a friendly as they were both going through) 32 million pints were poured. On a Thursday night. We rock hardcore to the max. Can you imagine what Saturday night will bring?

They let England fans into Russia where it’s 73 pence a pint? Mental! I hope the KGB are reinstated and ready!

>beer in Sweden is around £6 a pint.
Hah! My Pimsleur (or one of those “learn a furrin language by audio” thingies, I forget) used a skit set in a bar to teach numbers in Swedish.
“Ett glas öl, tack.”
“Två kronor.”
And so forth. After variations on this, a deep, serious male voice came on, saying earnestly, “Please note: beer is expensive in Sweden. Travelers should expect to pay MUCH more than two kronor for beer — or any other alcoholic beverage.” Then the tape went back to another skit. If I recall correctly, it involved a poor fellow called Bjorn trying (and failing) to invite a woman called Karin out to lunch.

And here is another take on beer ecosystem in Scandinavia. “We Finns” however often buy our cheap booze in Estonia.
https://satwcomic.com/the-circle-of-beer

Travellers should smuggle their own in!

What’s up with Karin? Bloody hell, Bjorn must be pulling the worst chat up lines ever for her not to go out and not have to pay for her own beer!

Six quid a pint is pretty expensive. What else do they have on offer? I’m surprised it’s not rife with moonshine.

I feel sorry for Federer; Nadal; Serena and co.
This is normally their fortnight in the limelight, but no-one is paying them any attention at the moment.

Nobody cares. Although this year I wouldn’t have to look at Andy Murray’s mum. 😉

Sweden?! Who are they? Didn’t they beat Switzerland? I thought they were the same country. Go Lions! I’m all-in on the WC this time around. Don’t know why it drilled so deep under my skin but it did.

They’re like French that don’t fight. Not surprised if their beer is that expensive. That’s all personality out the window.

YES! THREE LIONS! COME ON! Get yourself in one of those Chelsea bars on Saturday – about 10 am your time and cheer them on! I can’t because I’ve really gone and lost my voice and it still hasn’t come back. I’ve bought an air horn though as back up. ;P

I would’ve loved to see these games out there. Can you imagine? What a thrill that must be for you guys. Here’s hoping…

I’d love to be in a pub when the moment hits. I was at a pub for a nine-darter but it just isn’t the same. cos it’s regional

David Attenborough DM’d me on my insta and told me about the legend of the Three Lions. you know why there are Three Lions on a shirt? cos they’re doing the samba…

It’s awesome, my sweet! There’s nothing better than an international match in a pub. So long as you win!

You’re absolutely right. It has nothing to do with Richard the Lionheart because he couldn’t dance. Except with a sword.

I’ll be pulling for England just for you Julesy !
If any country deserves to win a darts championship it’s you Limeys !!

Pulling what exactly? No, please don’t answer that…;)

You better be, PPS! Get your budgies on and give it some dinner! ( That means dress accordingly and show some passion) Save you Googling the urban dictionary and coming up with something entirely inappropriate. Oh, go on then…:)

I tried anyway, but the Urban dictionary thought I was nuts.
As for my budgie, it is ALWAYS well groomed. Most ladies are so impressed they think I have a cockatoo.

Oh, that was good…so good. Haha! You’re as smooth as they come, mucker! ;P

Congrats on the British win.
I am saddened, though, by the cheating spectacle of players pretending to be hurt.
I guess the Brazilians were the best actors. But maybe they all do it? (Jobs for acting
coaches.)

Yeah, I hear ya. England don’t generally do that stuff. Mostly the Latin types or South Americans. AND THE CHEATING COLOMBIANS.