Home On The Range

Where wild beasts in pastures roam

In support of National Haiku Day and today’s blog post, which incidentally, is right on time.

The English countryside is beautiful. I love getting out and about in the thick of it all. Especially in spring. Such a wonderful, delicate season where hope hangs within reach. Renewal, naivety, fragility, and softness. This season reminds me of a woman getting dressed for a wonderful day. Here she is, fresh and new. Slowly revealing her grace. Lingerie lacing patterns across her body; her scent only just evident. Unsullied by extravagance.

In a nutshell, a bit like a bird before she gets her blooming summer frock on to go proper out-out!

The other day I decided to go out and about into the Vale of Belvoir which is just down the road from me. Apparently, it has been voted the best place to live in the UK and has usurped the Cotswolds. Even though my mother lives there and the Duchess of Belvoir, who is said to be a bit of a lush nightmare, this somehow didn’t cast a murky shadow on the result. Belvoir is the new dog’s bollocks.

I sometimes see evidence of what I like about Texas in the English countryside but obviously on a much smaller scale: lots of land, curious little buildings, rusting farm machinery, horses, and sometimes, even the distant sound of a shotgun being fired.

The only real difference is that Texas has raging heat, poisonous critters, and buffalo ranches.

Err, but, hold on a minute… 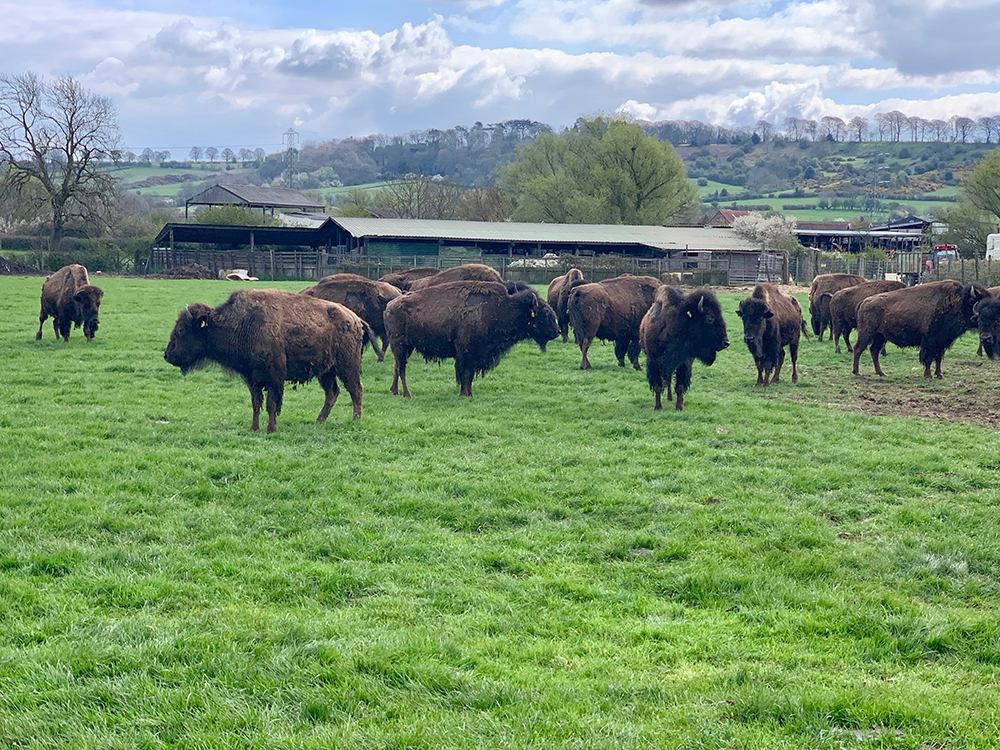 Oh yes. There is bison in the Vale of Belvoir. 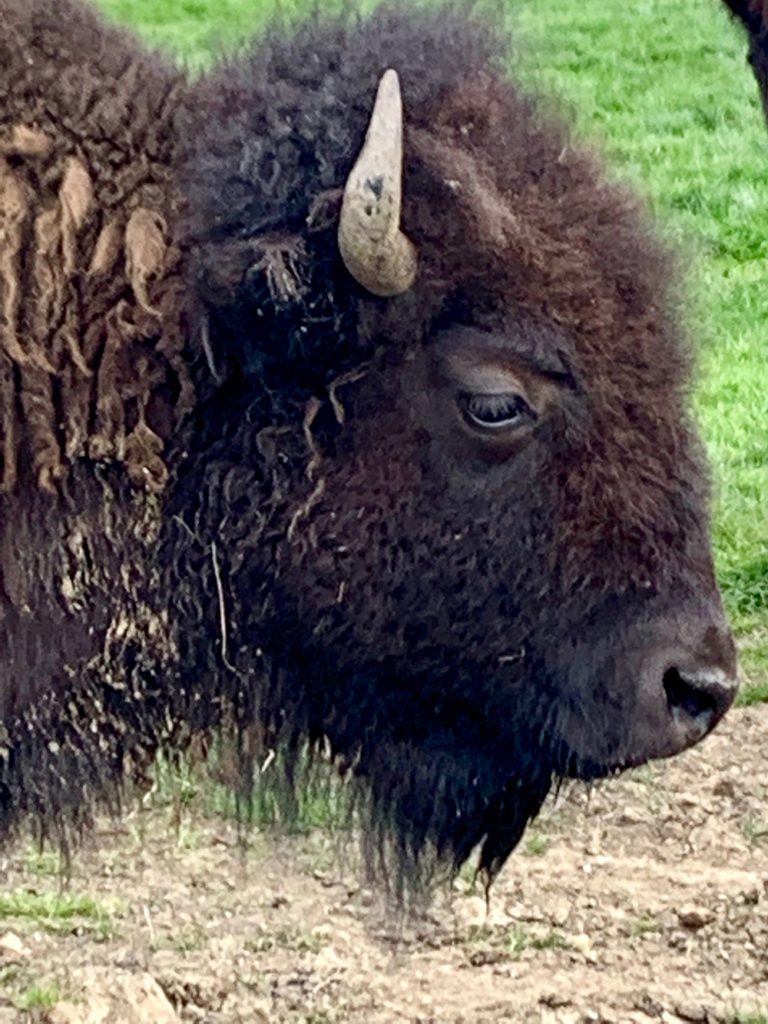 Buffalo? Bison? what’s the difference? As far as I can tell, those with bearded wisdom live here. 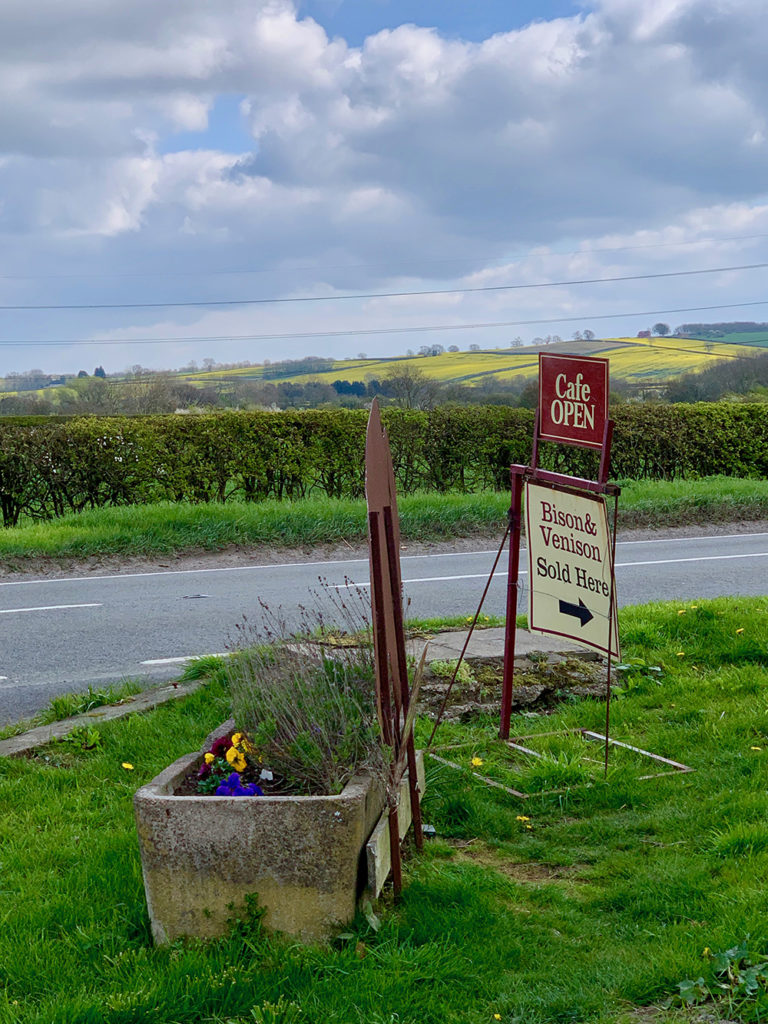 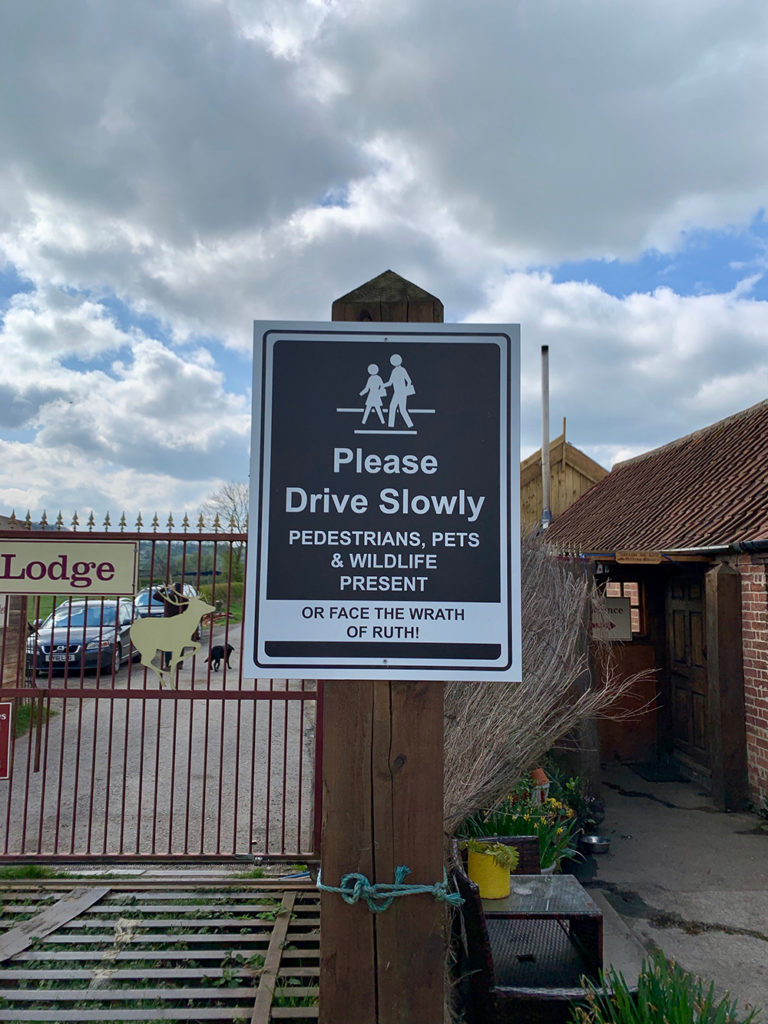 I didn’t know if Ruth was the chief bison or the owner, so I put my Vale of Behaviour in place and entered the classy cowshed. 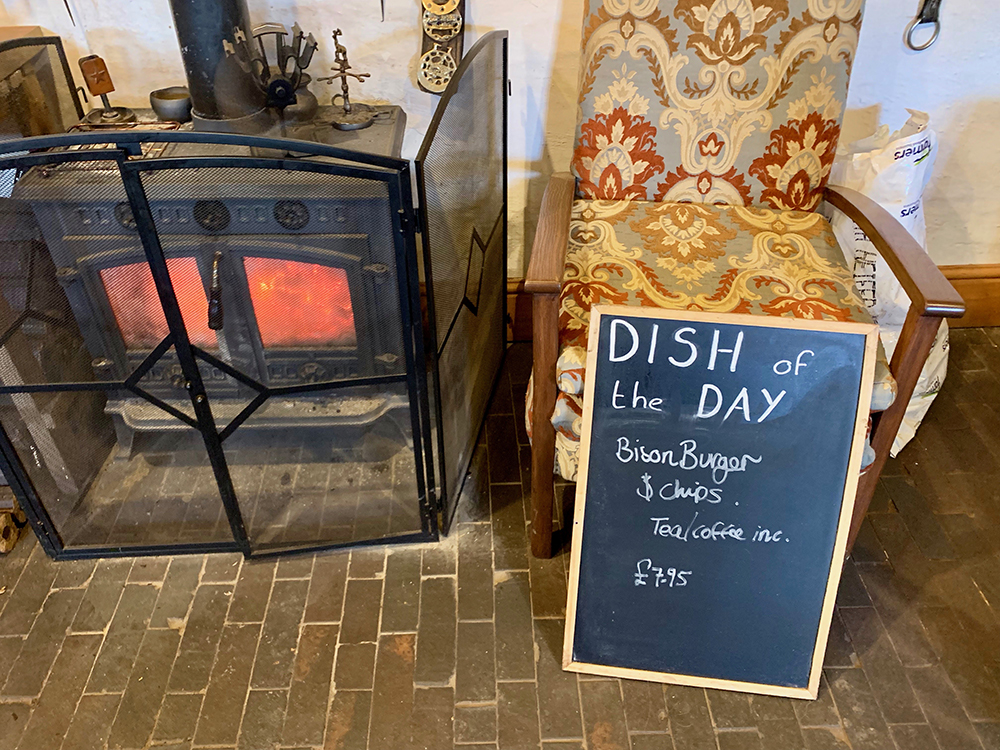 Deal of the day for under a tenner! And with a proper fire going. You can’t knock that for an A -list area.  They could have doubled that since being in Blighty’s best tabloid. Total respect. 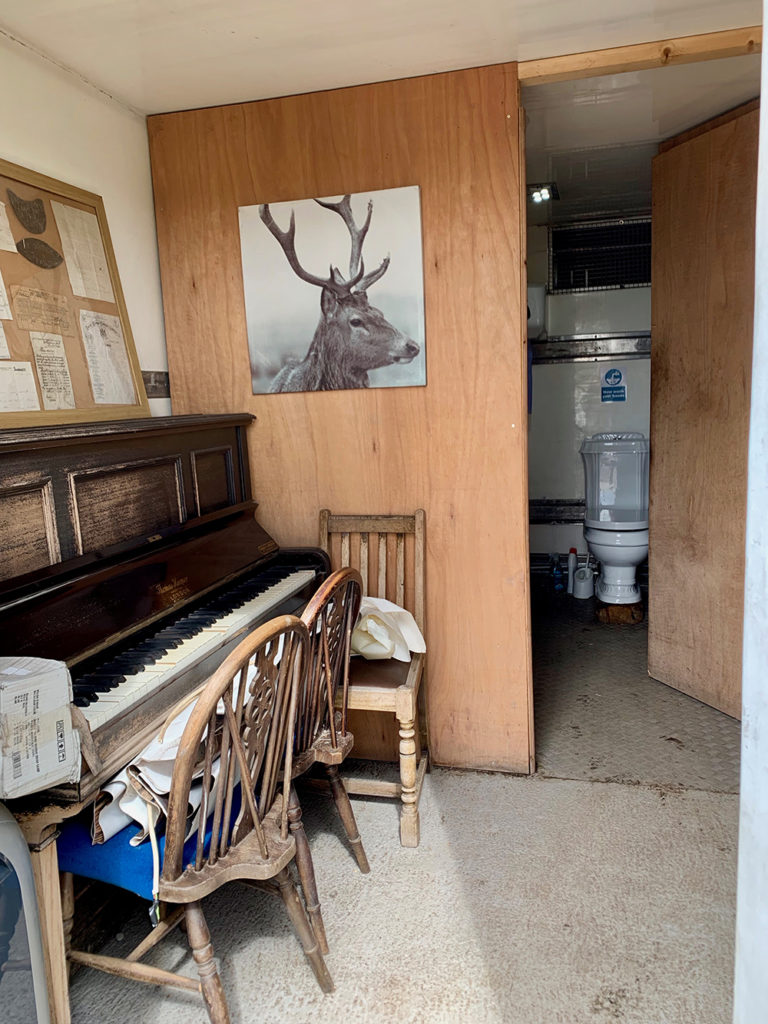 Still maintaining rustic charm, the porcelain was outside in a decorated shipping container. With a piano.  As my mother sat on the throne tinkling, I tinkled “God Save The Queen” on the old ivories. There aren’t many places you can do that.  But you can in the Vale of Belvoir.

Before It Gets Too Cheesy

What do you need on your bison burger? Cheese. A few miles down the road and there we were at the Long Clawson Dairy, the home of specialty Stilton. Inside they had endless cheeses in waxed coats at half the price of Sainsbury’s.  I think I bought one for every day of the week. 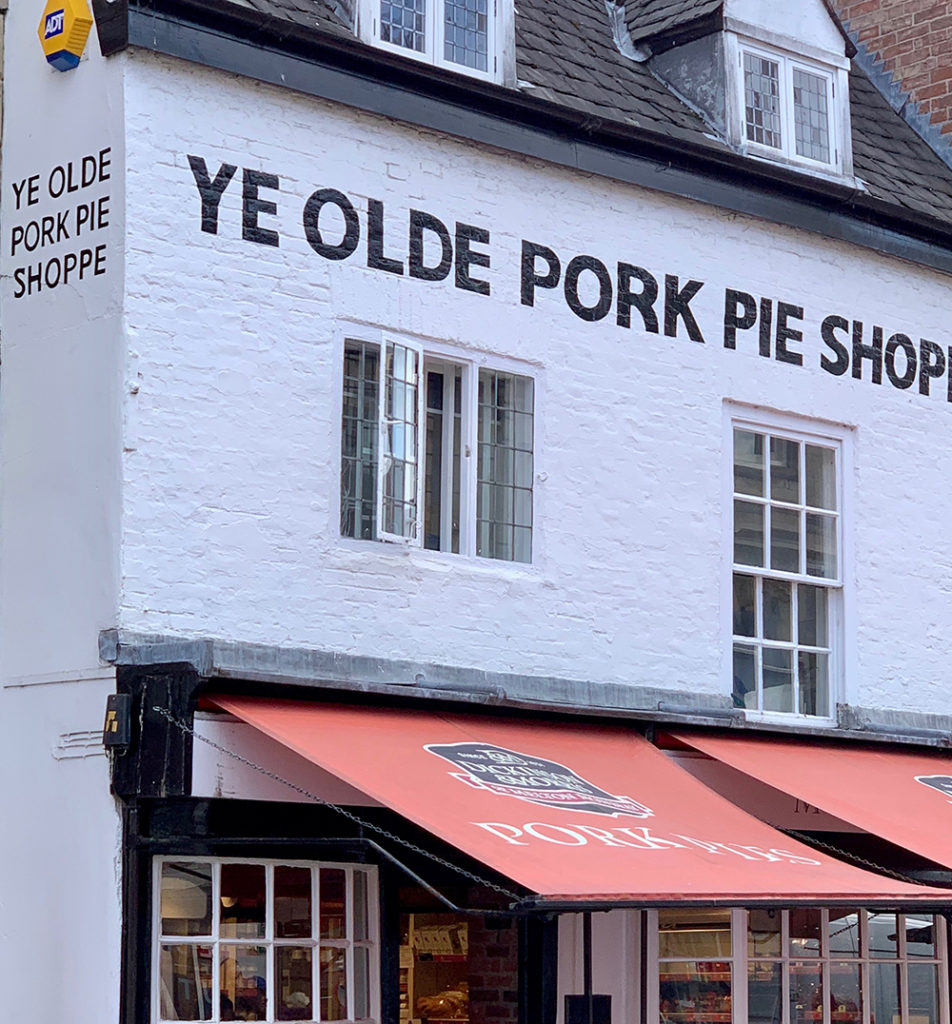 And to go with the famous pork pie from Melton Mowbray, in the very heart of the Vale of Belvoir.

And, if you want to live in the Vale of Belvoir, where bison run free and there’s cheese aplenty, you can reside in this rather lovely Georgian house. Don’t mind if I do.

Then, after a day full of wonder, it was time to tootle back to the village. 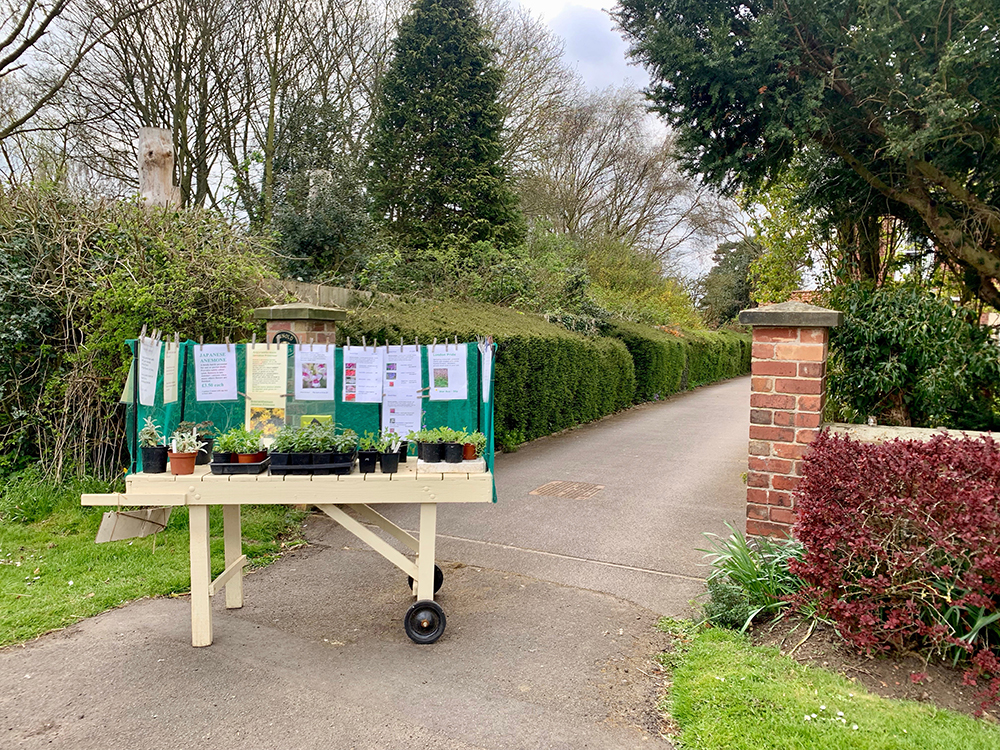 Where on the roadside, outside another rather spectacular house, stood a little trolley full of homegrown plants. Each with a colorfully printed out description sheet.

“How do you pay for these?’ I asked my mother, what with it being her village and all. “Do I go and knock them up?”

“Goodness, no! There’s an honesty box!

There’s trash in the Vale. I’m calling the Sunday Times.

So they actually sing “Home on the Range” (Oh, give me a home where the buffalo roam, where the deer and the antelope play) there? Sober? If they do, it would be quite something, because if they are in the proper mode, they will also need to carry handguns (loaded). You can remind them for me.

Well, LL, what d’ya think I was singing whilst I traipsed through those bison pastures! 😉

I’ve reminded them. But the farmers out there are very fond of their shotguns. 🙂

To think I used to live there and moved back to town. Are the roadworks just permanent near you btw?

I know! Still, hanging around with townies is where all the FUN is, right?!! Look at ALL those ace times you had with me! You don’t get that same kind of psychotic in the country!

Oh.My.Days. Yes. It’s doing my head in. They’re laying a gas pipe all the way along the Plains. Be like that until next Easter.

I truly love a woman who is home on the range, or at the oven, where she belongs….cooking all of her man’s favorite foods !
Speaking of buffalos, ( or is it ‘buffaloes’ or just ‘buffalo’ ? ) I’ve found a little ditty for you, with a cameo of your Mum after they rounded her up for cheating the ‘honesty jar’ :
https://youtu.be/VhSEwyFcJ08

You forgot to mention handcuffs there, PPS. I’m disappointed. Every man knows a good woman needs to be taught a lesson in good housekeeping. 😉

That’s where my mother should be for her shenanigans. Locked up in Belvoir Gaol. However, don’t go inviting her out to dance under the moon because that’s when all the trouble starts and she-wolf emerges.

Terry B please send a cake with a metal file in or a helicopter to lift me from county jail. Didn’t know the plants were “naughty “ ones honest.

Don’t think so Lynne.
You need time to think about what you have done.
And also to keep you from giving me a hard time on FakeBook.
However, I will send you a package of Spotted Dick to help make things more homey for you.
You are welcome.

Lynne – I hope you’ve seen the error in your ways, woman! Go and pay that lady and bring honesty back to village life. And don’t touch Terry’s Spotted Dick. It’s a ploy…

Terry – Don’t go sharing your Spotted Dick! That’s how you got into this trouble in the first bloody place! Too much Shagging! 😉

* the best place to live in Britain is British telly

* the last Bison lived in Fred Flintstone’s times, when he went out for a drink with the fellas

* I can’t play the piano when a deer is giving me the side-eye, I get Rudolph flashbacks

* before I eat cheese, I have to roll on top of it down a grassy hill to break it in. I went into a porkpie place but they told me to eat my porkpie hat first, can’t bring in outside food

* yeah, we had an honesty box of books at Obec Woods, I left my Hollywood manuscript in there and that was the only thing NOT stolen. we don’t have a library anymore. I went to Reno to drown my sorrows and there was an honesty bar in my motel room…

A Haiku is this:
A non-rhyme with no reason
To convey feeling

Whatevs… I don’t really understand the concept but play along nicely. I might get a free trip to Japan. My life runs on free travel opportunities. And I’ve always wanted to go to Japan. Why don’t any Japanese people read this blog? Rude.

British TV is the best. My current recommendations are – “Afterlife” Ricky Gervais drama. Very real, awkward, sad, bloody funny, and politically incorrect to boot.
“Fleabag” a tarty bird on a shag fest through pain –
“This is England” – a hilarious mockumentary on Village life and marginalised youth in Britain.
And, of course, “The Grand Tour. ” Get watching.

We have phone boxes turned into little libraries here where people book swap. This is where your manuscript should be left and then it can be turned into an awkward British drama *)

Hey you… how are you… long time no see…

I hope all is well with you…
~shoes~

Shoes! So good to hear from you! Sorry for my tardy reply but I’ve been adventuring!

Juju, I hate it when you include pictures of old blighty. As much as I love The City, I lived in villages for five years like Enstone, Thurning, Winwick and Polebrook. Each little village manufactures its own enchantment and your pictures just remind me of what I have lost, though much remains in the heart.

You know through first hand experience there are many differences in the character of Villages in the UK and the small towns in the states. Two of the most important are space and time. With space, we have so much in the states and were never compelled to pack humanity into a small space. The charm of the “clustering” of people, community and architecture of England just didn’t need to happen here, no imperative. And as for time, well, the accumulation of time provides “furnishings” in English villages that may never happen here. In a country where you often need a car to go check your mail, well, it’s likely the essential nature of the two countries shall never meet.

Having said that, please keep sending the pictures, keep reminding me of the beauty that is now all but lost to me and above all things, never deprive me of you!

Villages are very enchanting! Yes, I love reflecting on the differences between the Uk and the USA – each has its charm and positives and negatives. That’s the one thing I would say I missed most about England is the fact that over here you can walk around more and you don’t have to get in your car to go out if you don’t want to.

But of course, I will! I aim to please my lovely readers! 🙂

Georgian houses rule, let’s get it. And the castle, obvs.