Hysteria In The Wisteria 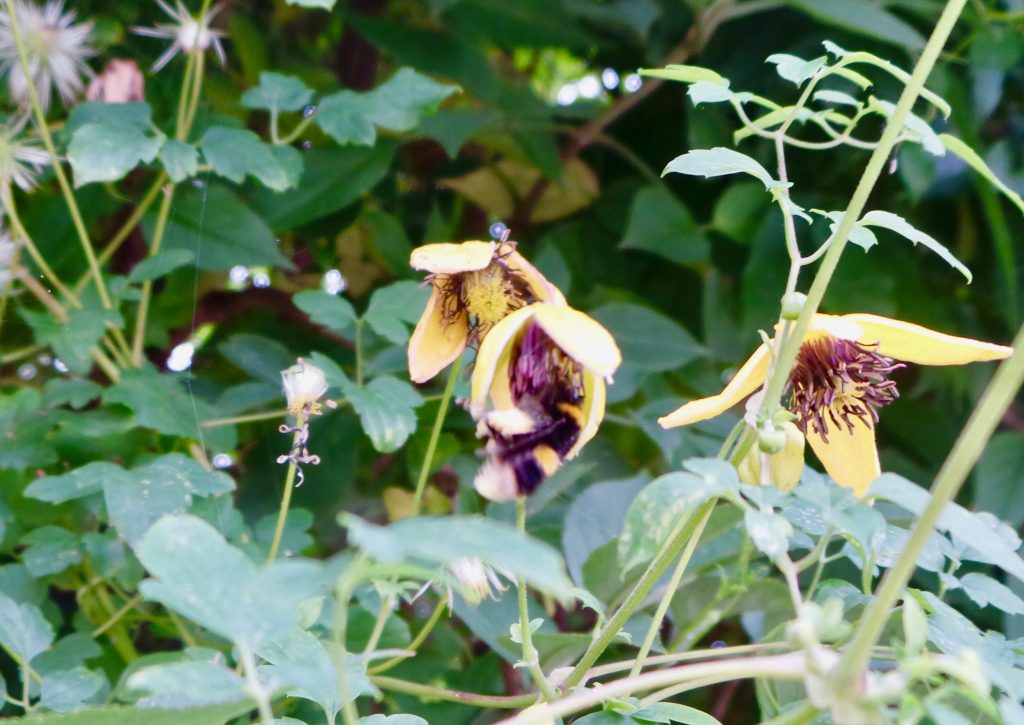 On my tenth birthday, I asked for a pair of binoculars and a book on birds. This may come as a surprise to you.

As I grew, this followed with becoming a member of the school chess club, outdoor hiking adventure club, a crew member for the yacht club and book monitor. Thankfully, by the time I hit my teens I discovered strawberry lipgloss, boys and pubs before all evidence of any personality was lost.
This young ornithologist swapped blue tits for how to squeeze real tits into a wonder bra and still stay upright in 4” heels. Progress. 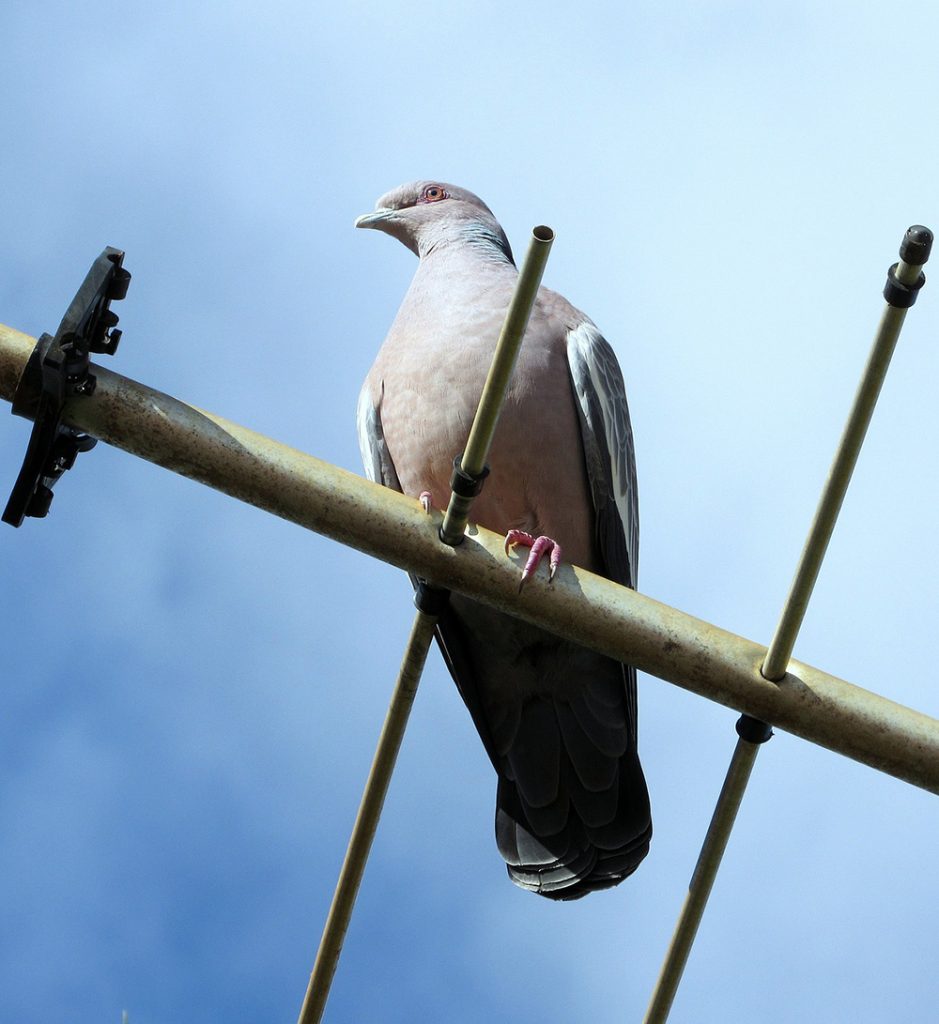 As I sat on my patio in the glorious English sunshine ( the heatwave continues) I noticed that the wisteria and honeysuckle on my pergola had gone quite insane. I moved in closer to inspect and found that there was a pigeon nesting within. I gave the pigeon the “thumbs up” because that meant I didn’t have to spend half a day cutting it back in order to preserve wildlife.

I paid attention to this nest over the next week and noticed that it had started to tilt a little. I looked up pigeon nesting and found that these birds make crap nests. But, I put the thought to one side trusting that these pigeons knew what they were doing. 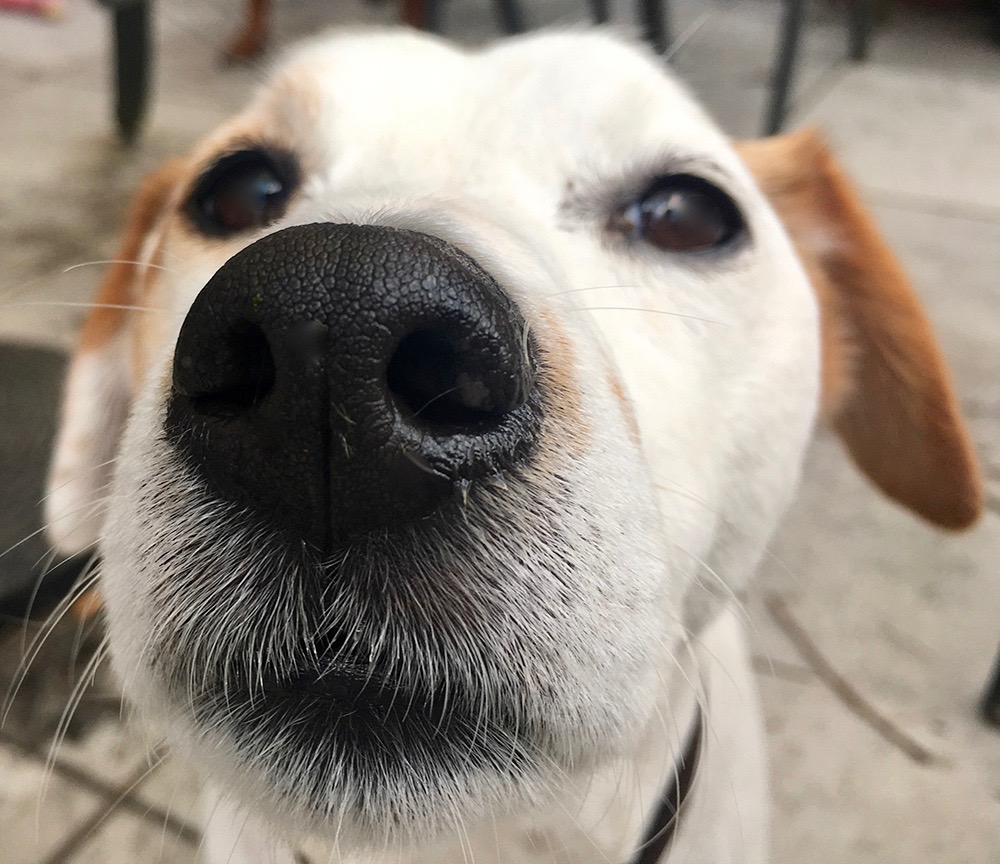 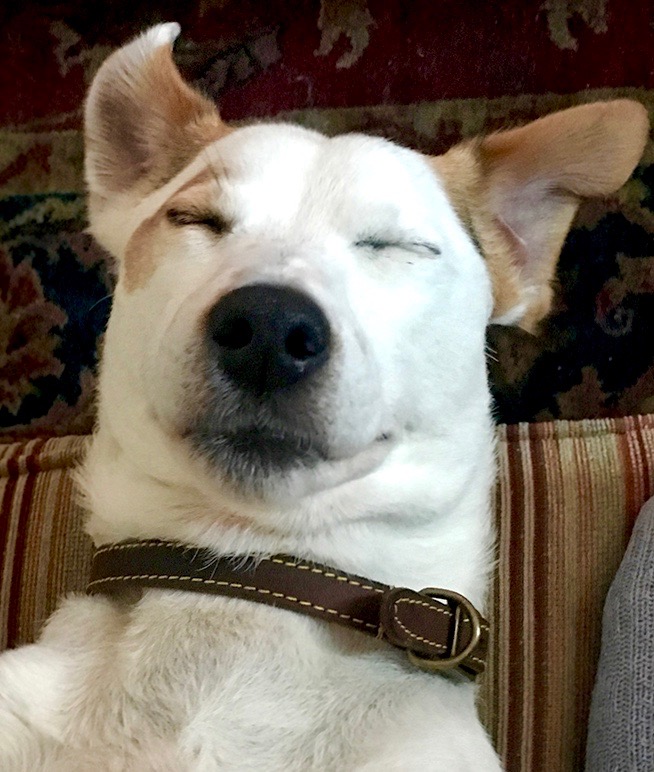 This is my terrier. He’s called Noops because he’s a backwards spoon. You can see why.
He actually has more personality than most people I meet, rarely barks,  is incredibly cunning and kills anything that dares to set foot in his garden.

One summer evening last week when I was watching ‘Line of Duty’ on Netflix and couldn’t tear myself away because this cop show is outstanding, I noticed the dog had gone AWOL. I paused the show to find the hound outside standing over the fallen pigeon nest with a dead baby bird.

I felt very distressed for the pigeons who had been sitting on this nest for weeks, nurturing their chick. I cleared it away, had a word with the dog, shouted sorry to the birds and went back inside. An hour later, the dog was nowhere to be seen again. I realised he would be possessed by the nest disaster. I know this because he once saw a spider come out of the corner of the kitchen 7 years ago and still thinks it lives there. If I say “spider!” he runs to that very spot and stares at it for hours. 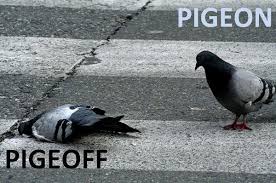 And there he was, with a second chick, that had been hiding, in his mouth. I went insane, locked the dog in the utility with the promise of a nice new home at the RSPCA and rescued the wounded bird.
I put the creature in an empty box (courtesy of Amazon) with a few remaining twigs from its nest.

I tried to put it back in the pergola. No go. I looked up what to do. Warm milk. I began to feed the baby pigeon some 1% chalk water from a teaspoon but think I only helped in drowning it since it was punctured. I watched in distress as the bird flailed around and died. 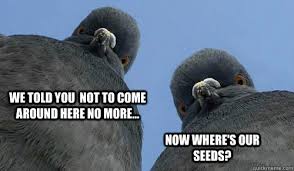 A few days later I noticed the same two pigeons building another nest back in the same pergola.
I looked up pigeons to find that they mate for life and tend to have two chicks. The female sits in the tree and the male bird fetches twigs that she puts underneath herself. I don’t know why humans haven’t adopted this idea. I’m happy to sit in a field reading a book whilst a man builds a mansion around me until I’m satisfied.

I watched this pigeon work ferociously day after day, minute after minute bringing twig after twig. His work ethic was admirable despite the stupidity of returning to the same place.

“I have to help them,” I declared to friends and family.

“Jules, they’re flying rats. You don’t need to help them.” 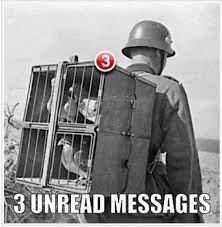 “Oh yeah, well it was a different story back in WW1 and WW11 when we used them to our advantage, wasn’t it! Yeah, think about that. Think of all the lives pigeons have saved. They’ve even been awarded the Dickin Medal. In fact, I only went to Cologne because of a pigeon called Colonge, remember?”

Who’s the stupid one? 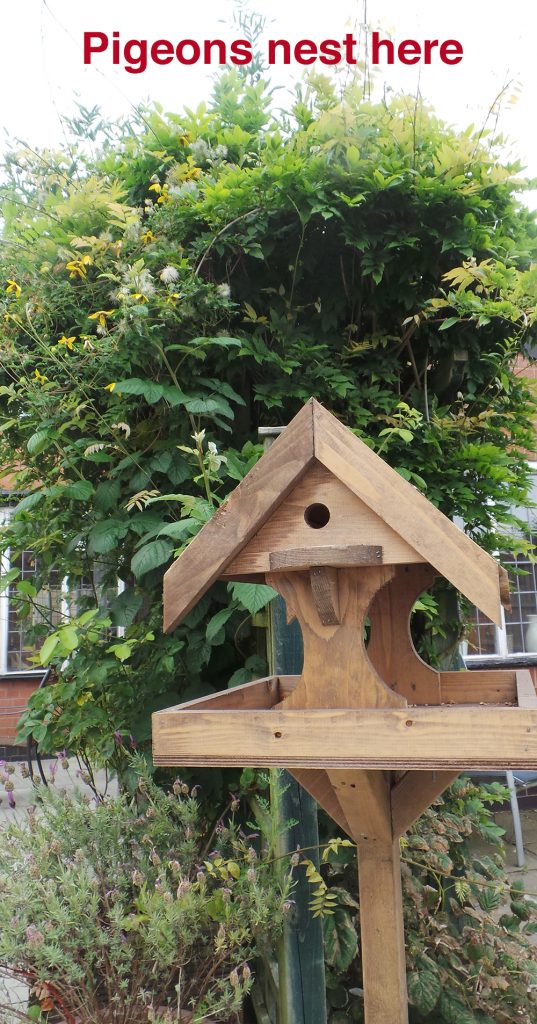 I ignored the vermin callers and carried on regardless. I noticed the pigeon fed on the grass. This is not conducive to staying alive because my dog will catch it, rag it and have it lifeless in a matter of seconds.
With a flash of impulse, I drove to the pet shop and explained this dilemma.

“I need that bird table. Unchain it. And I’ll take that bird feeder. What do pigeons eat? Give me a few bags of “Taste the difference bird seed” And so it was. I assembled my pet toys in the garden. 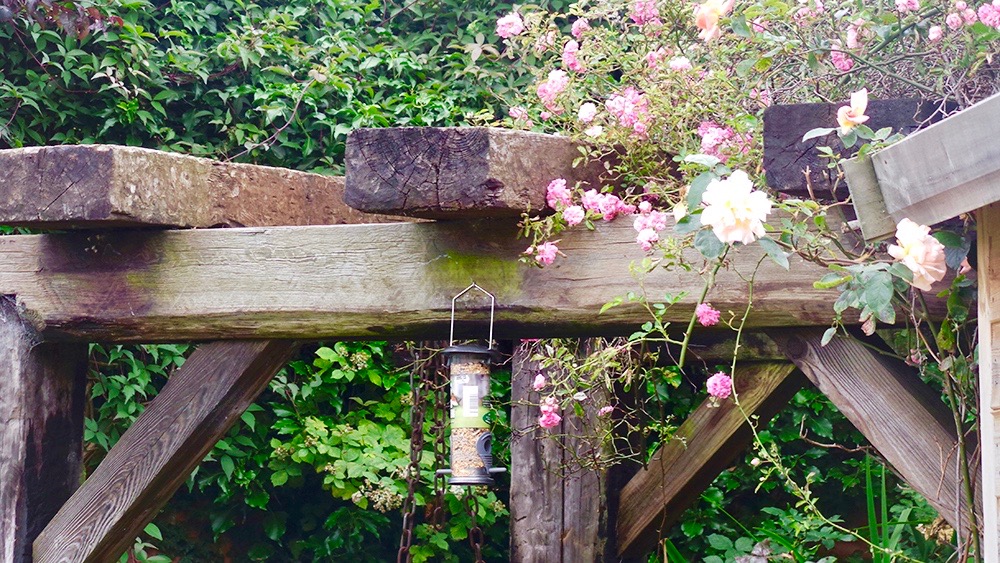 Karma does it again

I’m totally sick of Karma. I should know better since I lived next-door to her in Houston and found she was a nut job lush. Here’s what happened:

The pigeons completely ignored the bird table and continued to graze on the floor. Maybe birds need a visual, I thought. So, I put this dead looking pet toy bird in the middle of my lawn.  “Yeah, this is what happens if you stay on ground, pigeon.  That’s the future for ground-hoppers, my flighty friend” 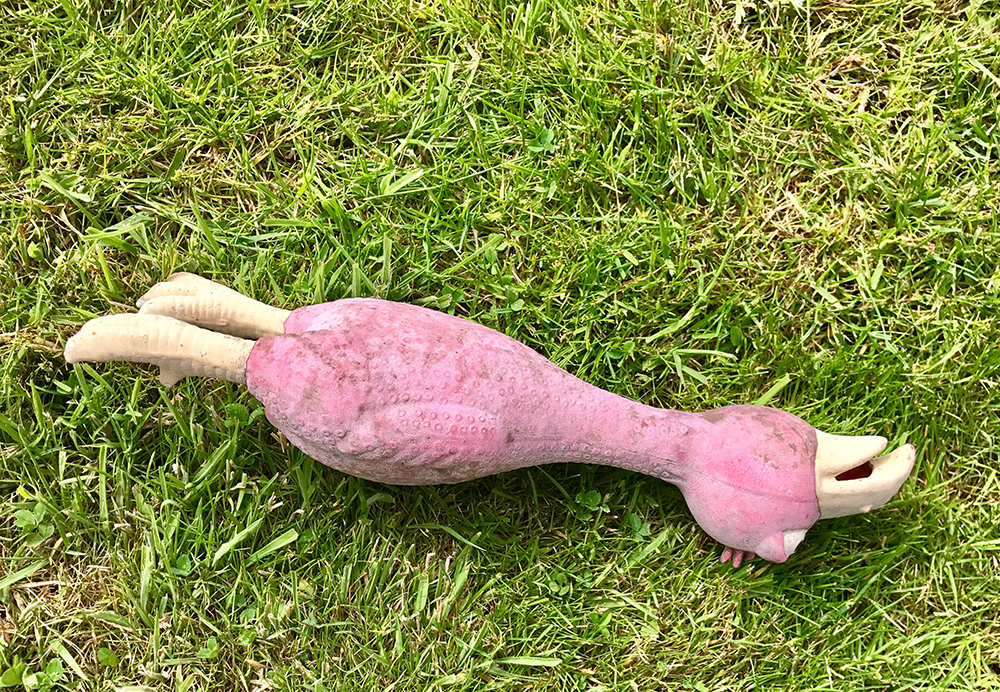 Didn’t work. Instead, all manner of other flying friends come to the table including two vicious magpies that steal other birds eggs and a thieving “It’s all about me” squirrel. I now have to monitor outside activity like a general on a battlefield: shooing off the pigeon before the killer dog comes out, scaring off murdering magpies and cats and trying to convince the neighbours that I haven’t gone stark raving mad.

LOL… your example to other birds looks like a dead chicken. You’re killing me. 🙂

Did you get your slingshot yet? Rocksalt works too.

These birds don’t seem to get my visual, Hardnox.

Not got it yet, though perhaps I need it more than ever now! In America, I noticed that they sold salt pellet guns for killing bugs. I wanted to buy one but would have had my luggage ripped apart by Heathrow police if they’d seen a “gun shape” in my bag. I didn’t want to risk being put in olde gaol! 🙂

I have one of those guns. They are called “Bug-Assaults” and they are a hoot to play with especially at parties and cookouts. Simple table salt is the ammo and it is great fun to blast flies. A friend outfitted his with a laser. 🙂

I could see you now at Heathrow explaining yourself. Bwhahahahahaha

I’m jealous! I would love to play with that toy. Obviously, I’d want the one fitted out with a laser! Ha!

Yes, can you imagine? “Sorry officer but really, there’s no need for those rubber gloves…” 😛

When I get really old, I will sit in the park wearing ONLY an over coat and feed them while gumming (no teeth) chewing gum. I’m not QUITE ready to do that, but I offer fair warning. Naturally I’ll keep a revolver handy in the pocket of the overcoat to knock off any cats who come hunting flying rats.

I can’t wait to witness that scene! Part of me can’t possibly imagine you in that scenario and yet part of me can. I think it’s vital to be totally menacing and eccentric when we get old. 🙂

> it’s vital to be totally menacing and eccentric when we get old
Why wait?
😉

I quite agree, Mike. Start as you mean to go on! 🙂

“This is what happens if you stay on ground, pigeon…. That’s so funny, Jules. Nearly fell off my chair.

Ha! Well, the pigeons are oblivious to my grounded approach. But, I don’t want to be causing you injuries by falling off your seat!
🙂

Don’t talk to me about pigeons… little feathered bastards!
Only good for one thing: pigeon pie.

Look, you have a dog now. Dogs hate pigeons. Use the hound to your advantage.

Pigeon pie? No. This is not medieval England.

Not for you maybe, but I live in Luton, where we haven’t yet come out of the Dark Ages.

Good point! Full of Mad Hatters and immortalised by Lorraine Chase. And, it took you a while to figure out that dishwashers were a “thing” …

I know that feeling, “Well done,dog, you’ve just killed a defenseless bird,” as it looks up at you with that I-haven’t-done-anything face and a feather or two on the lips. “Yeah, good work, Einstein.”

Right, LSP. Look, dog, this is why I feed you extra juicy Pedigree Chum and bacon treats so you DON’T have to kill animals. I’m thinking of buying a donkey. They eat grass and scare dogs.

No and no. Gross. I am a child of the modern world where one does not have to eat pigeons.

OMG Noops is adorable! can I adopt him? my cats are looking at me shaking their heads disapprovingly as I type this…

i’ll check out Line of Duty. I need something to fill the 24 hole post-cancellation. Jack…………isn’t back.

Despite loving David Attenborough and his wonderful nature shows I often find myself wanting to have a word with the cameraman. “Why are you filming and NOT going to save that animal from a violent, hideous death?”

You may adopt my dog, my sweet. However, I don’t think your kitties would like him. Maybe they’d put him in his place.

Check it out! Seriously. Brilliant series based on true events. Got more twists and turns than even I can come up with! *)

This is what happens when humans get emotionally involved in the dramas of the animal world, Jules. They try to help the bird-brains and end up helping the varmints and squirrels. You could try sprinkling cayenne pepper over your lawn to make it a no-go area.

You’re quite right, Mr Gorilla Bananas. You can’t mess with nature and I should know better.
I’m currently considering a donkey. I think a dopey ass would be rather appropriate.

[…] placing a bird table and seed feeder in my garden to combat the hysteria in the wisteria last year, I have now created a flocking lot of trouble. All sorts of birds come to my pad to fill […]