I Only Went And Held A FLIPPIN’ Tarantula! 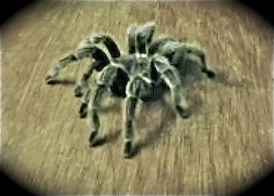 I’m not even kidding.  And if you’d have said to me, this fine Sunday morning, “Jules, today you will hold a tarantula,” here is what I would have said:

“Are you stupid?  Do you know me?  I am terrified of spiders.  In fact, if a house spider comes into my living room, I leave.  This will never happen; not even if you gave me a million pounds.”

If only I’d have held out for that….

So off I went with a group of friends to the animal farm.  I love animals and I was in need of some nice, gentle, Sunday therapy. I would like to reiterate that I HATE spiders. Off we trotted, looking at all the fluffy, lovely beasts and then I decided I’d like to go back to the reptile house and hold a snake.   Only this time, when I turned the corner, snake man had gone for a Burger King and Spiderman was in his place…..with a tarantula.

“EWWWWWW…”  I shrieked, doing a hop, skip and a jump, panic dance.

“Would you like to hold her, she’s called Cynthia.”  Spiderman asked, like this was a normal, everyday thing.

“I would rather poke my eyes out with a hot stick,” I replied flatly, “I can’t even look at that thing…gahhh…I’m scared of spiders and of anyone who thinks of them as pets.”

“But this will cure your fear.”  He said, like it was only a fluffy bunny or something.

“No. If you put that thing ANYWHERE near me, I will die. Nice to meet you, weirdo, I’m off to play with the meerkats.”

But oh no, he couldn’t leave it at that could he?  No, look it’s Jules, the person that people seem hellbent on challenging.

“Just come and sit next to me.  Baby steps.”  He offered. “You don’t have to do it, but you might change your mind.”

“HAHAHAHA!  I.Might.Change.My.Mind…Not.”   Of course, a crowd began to gather and look at me in that “Go on..don’t be a baby…be brave!” kind of way, because they were too shit scared to have a go themselves.

I sat down next to spiderman who I found out was called Corey, trying to think of a million ways to get out of this horrid situation with a captive audience.  However, all I could do was stare at the awful, gigantic spider and hyperventilate.  I trembled like I was on a come down, began to perspire in places I never knew sweat could come from and my poor little heart started making a violent bid for freedom.

Corey was magic.  He is one of those people that I could do with babysitting me everyday of my life.  He was calm and soothing and made Cynthia the gigantic tarantula, seem as harmless as a guinea pig.  I think he must have drugged me or used some kind of hypnotherapy or psychobabble because after half an hour of cajoling and dripping pretty words in my ear, there I sat with Cynthia in the palm of my hand.

You can witness my bravery in the video below and then you may sing my praises, LOUDLY, in the comments.

whoa, underneath the mask Spider-Man is Morrissey! *)

Do you know what, sweet Phoenix, I was thinking of the sea duck and it made me feel better! You are curing me 🙂
Haha! Yes! It must be his ‘ everyday is like Sunday’ job. *)

It is EPIC. As in, Even Peaceful Insects Crawl. Okay, just goof in’ on ya. I’m proud of your courage, Jules.

The new acronym! For arachnophobes!
Thank you Clark! I feel like I’ve evolved, massively! 🙂

Hey Shoes, nice to see ya 🙂

Like I said on Instagram I am very proud of you for being so brave! You can do anything! Yay you!

Awww.. Thank you so much, Lonnie and thanks for coming here to tell me too! I can’t believe I did it! 🙂

Excuse my french but, OH MY FUCKING GOD, YOU HELD A TARANTULA!!

Haha! That’s exactly what I said to myself! MANY times.

And now when you see helpless little spiders around your house, you will have a different opinion of them. Maybe. What about it?

I applaud your bravery for facing your fear and triumphing.

Hmmm.. I’m not so sure. I think I need constant therapy to never be scared of them. I don’t like the way house spiders zip across the carpet at lightning speed. Makes me jump.

I’m very proud of you Jules, but were you putting your other hand over your face?! No spider called Cynthia was ever going to hurt you – she behaved like a real lady and tip-toed over your fair hand! I sense she wanted to tell you about her last boyfriend and how she enjoyed eating him after they made love!

Yes Mr. Gorilla Bananas, I was! And trying not to bite my fingers or swear loudly in public.

It was when he said that she still had fangs and venom that I stopped breathing. All I could think was…what if I’m the one person she DOES want to bite. But, good old Cynth, she was pretty nice and I’m sure her boyfriend was very tasty!

Never go to the animal farm. Weren’t the literary references enough to keep you away? You’d be writing a different post if dear Cynthia had sunk her fangs into your flesh.

It would have flown across the room if it had! And so would Corey!

Twice even? How epic you must’ve felt! Of course he didn’t drug you or promise you the world. You are just that freaking brave. I’m impressed but not surprised. At all. No, no, no…. like in the video.

I love your confidence in me, Blue 🙂 I saw a house spider yesterday and jumped out my skin! Baby steps…no, no, no.

Yeah, I know its been a squajillion years… but I must say, I like what you’ve got going on here julessmith.co.uk 😀 And bravo for not screeching like a banshee with the tarantula… which is probably what I would have done 😉

And she’s BACK! And not before time, Miss Azra, you have been missed! I’m looking forward to reading your chronicles as soon as I get back from Welsh, Wales 🙂
I was screaming inside, oh, I really was 🙂

She is BACK alright!

But um…. a house spider?

Eeeeek! You’re a brave, brave woman Jules. I’ve been able to hold massive pythons and even rescue little house spiders by relocating them…safely ensconced on a piece of paper or something. But to hold a tarantula like you did without shrieking…hell no. Good Job xx

I am so brave. Really. I look at it now and think, WHAAAAA? I must have been hypnotised. 🙂

That could have been the spider that would make you Spiderman.

it seems your site is still eating up my comments. Blue says it might happen when we put www address in the website box when leaving a reply so I will now try not to put any address there….

DEZZZZZZZZ- IT WORKED! Look! You’re here and un-swallowed 🙂 See what blue and perseverance can achieve!