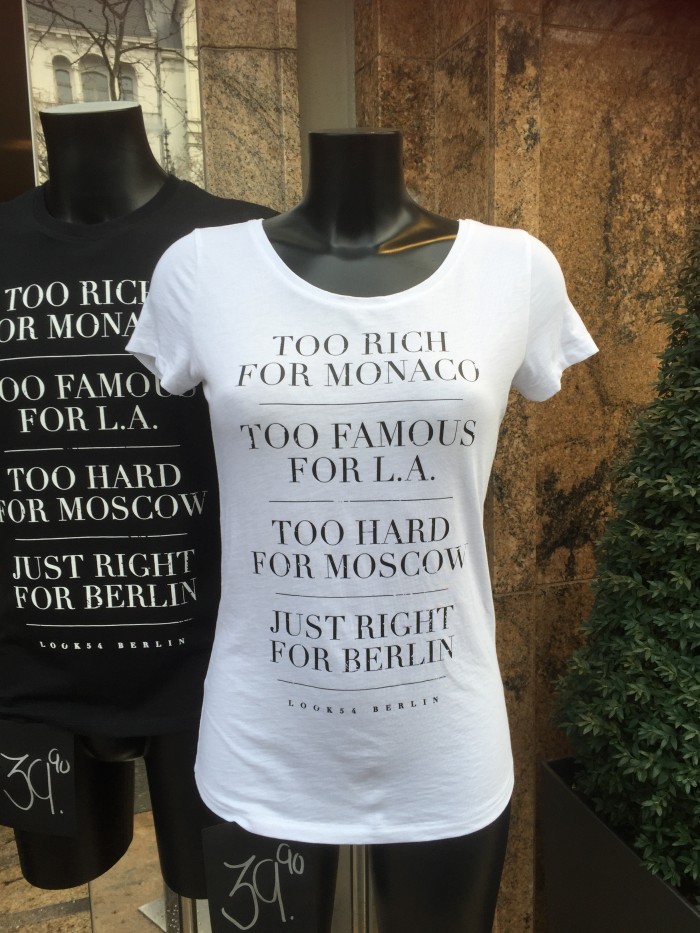 My Mum came round.

“Do you want to go to Berlin?”

“No, seriously,” she snapped in that Mummy voice. “My other half can’t go.”

“I don’t flippin’ blame him. You know it’s winter, right? It’s FREEZING over there.”

“Oh well in that case, get my bikini!”

I sensed a Cold War coming on. “Ja, mein Fuhrer…but..can I shout “Achtung Spitfire!” out loud when I’m there.”

“NO. You did that in Cologne.”

So off we went to Deutschland. Instead of getting a taxi from the airport, which I swear to God was somewhere in Austria, we decided to do a remake of Planes, Trains and Automobiles, choosing instead to take the bus the metro and THEN a car when I’d had enough. I’d never been so cold, not never ever. Except for the time I went to Boston and it was – 14 and I couldn’t blink, but that’s another story.

Here’s one thing I noticed on my travels: I have never seen so much graffiti in one city. Its EVERYWHERE.

“I only want to eat German food,” I said. “Authentic, off the beaten track cuisine in Deutsche Kitchens.”

As luck would have it and before I froze to death, we found a rather lovely restaurant come bar. It was perfect. We entered and were greeted by a throng of activity and a very tall barman.

“No,” he replied. I thought he was just being sarcastic but he wasn’t.

“Well, what about later?”

I turned to my Mother and whispered in her ear “For Christ’s sake don’t mention the war, this one’s a bit prickly.”

We left and found another but on the way home, she decided that we’d go back for a drink at the bar with Herr NO and see if we could get a table on the Sunday.

“No.” But I noticed a faint smirk in the corner of his mouth. Game on.

“Can I have a white RUSSIAN, please?”

“Ok then, a Vodka Martini,” I retorted.

I waited it out with English defiance.

“Does it say ‘Cocktail bar’ on the side of this building?’ he asked me.

“So, you can have beer, wine or spirit. Choose.”

“You should speak German when in Germany.”

“Nein,” I said. See, I was coming back strong with a taste of his own medicine. “Besides, I DID speak German when I first came in and YOU spoke back to me in English so what’s the point?”

“From now on we will not speak English then, “ he said.

So I started talking to him in French.

That didn’t work because of course, he spoke 5 languages and answered me back fluently. However, he couldn’t pull it off as well. He didn’t have that soft, fluid roll so I felt slightly victorious. England 1 – Germany 0

“Martin.” he said it just like the English version.

“How do you say it in German?”

“Martin,” he replied, just the same as before. That did make me laugh which I berated myself for.

Martin put two glasses of Schnapps on the bar.

It was then that the truce was met. After that, Martin was cool and his place became our local. If you ever go, I’ll tell you where to find this friendly joint because it’s worth the visit. 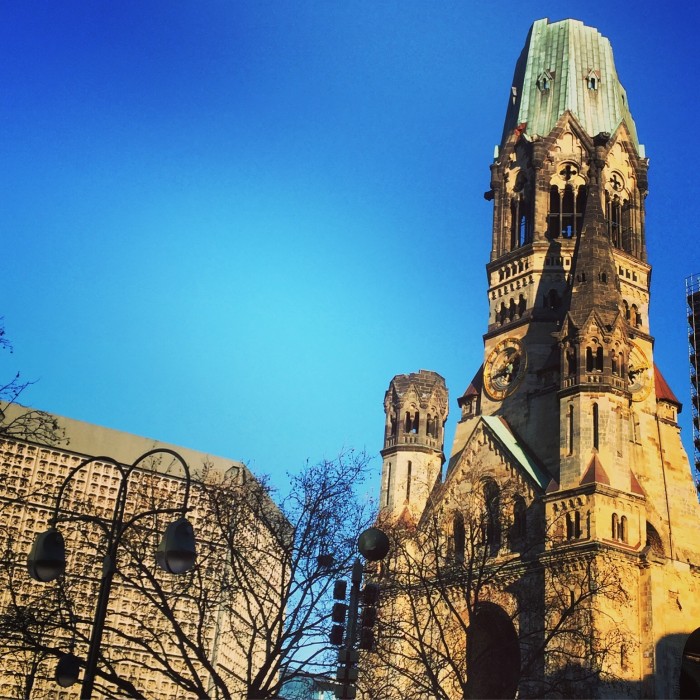 TheKaiser Wilhelm Memorial Church with no steeple.  Something to do with Lancaster’s and B-52’s. 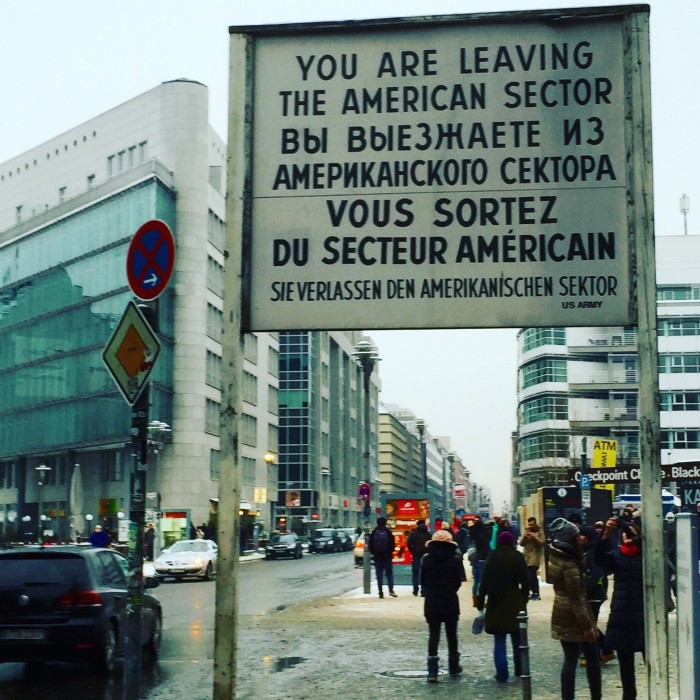 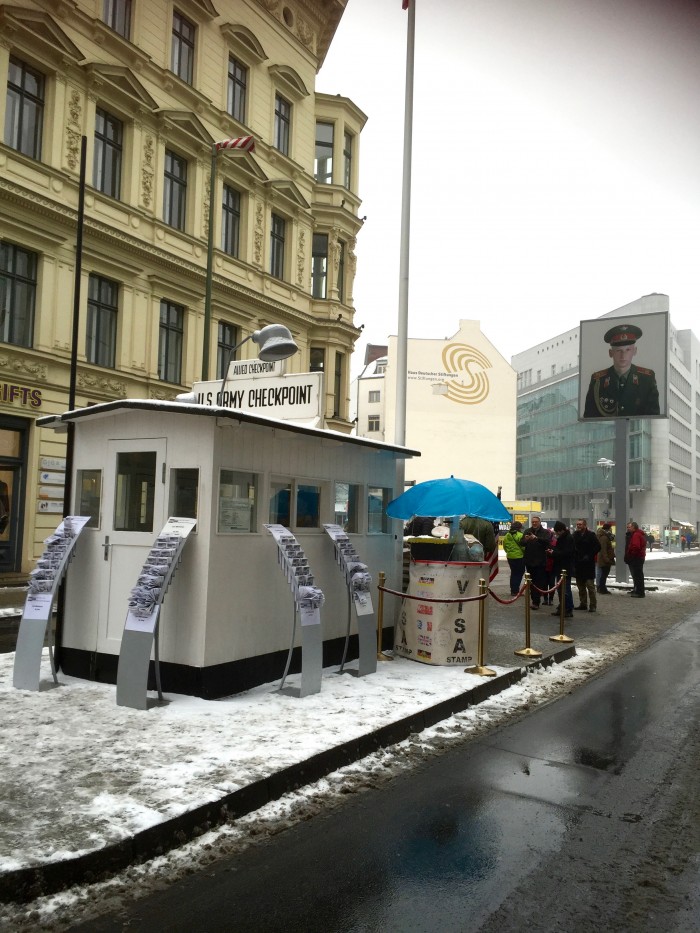 Which as you can see is a little white hut right next to McDonalds and has Germans dressed as American soldiers.

Then decided to Foxtrot Oscar Juliette….to 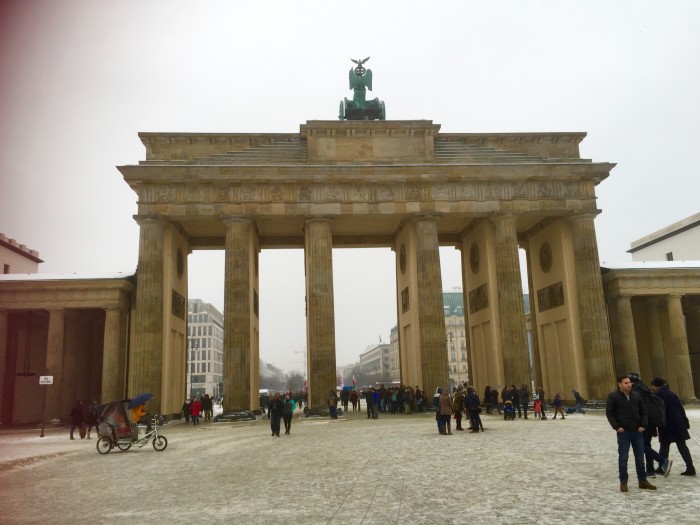 You are lucky I’m still alive to show you any pictures after this as my Mother decided I should experience a tuk tuk.  I sat in a bubble of plastic amidst roaring Mercedes and Audi’s wondering how long it would be before I bounced off one of their bonnets. 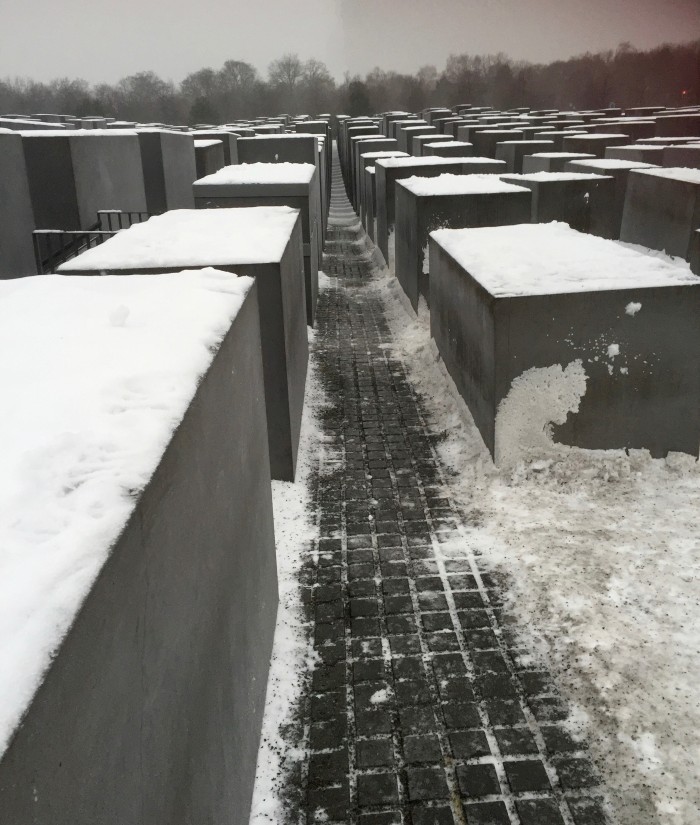 The Jewish Memorial.  Yes, it is as somber and sad as it looks. 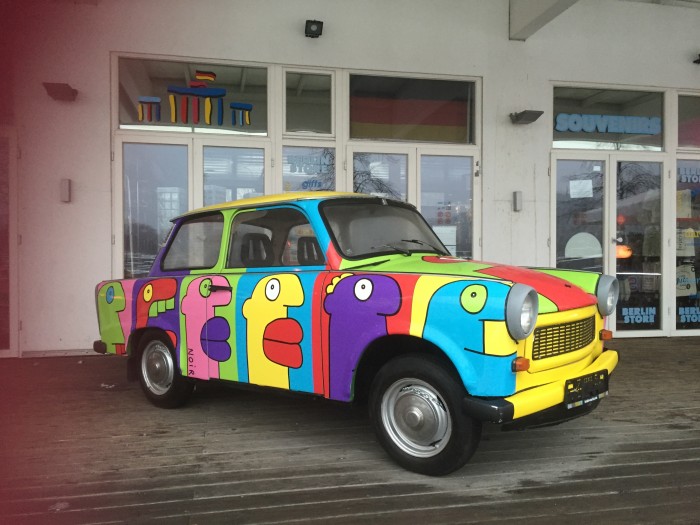 Now I’m going to show you a few shots of the Berlin Wall.  There are some original preserved sections and lots of it that have been painted by various artists.  I took many photos of this as I thought some of the art was spectacular but I’ll just show a few pictures. 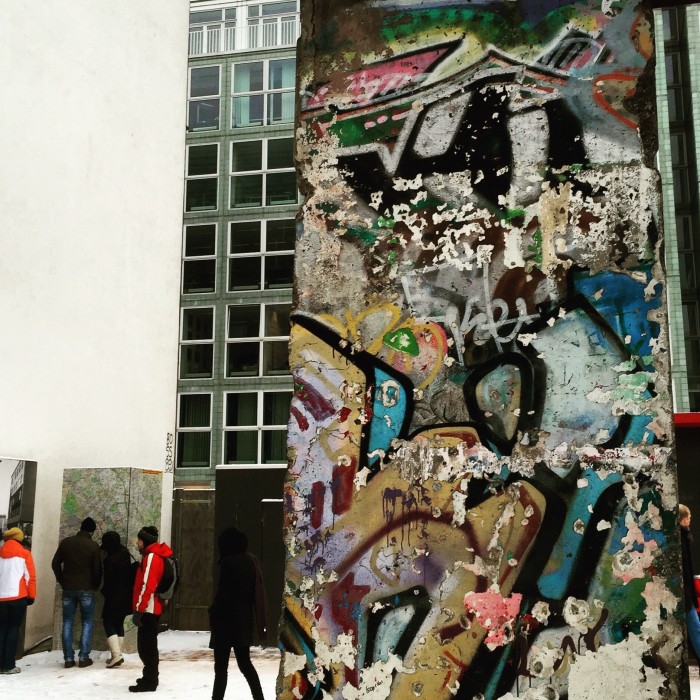 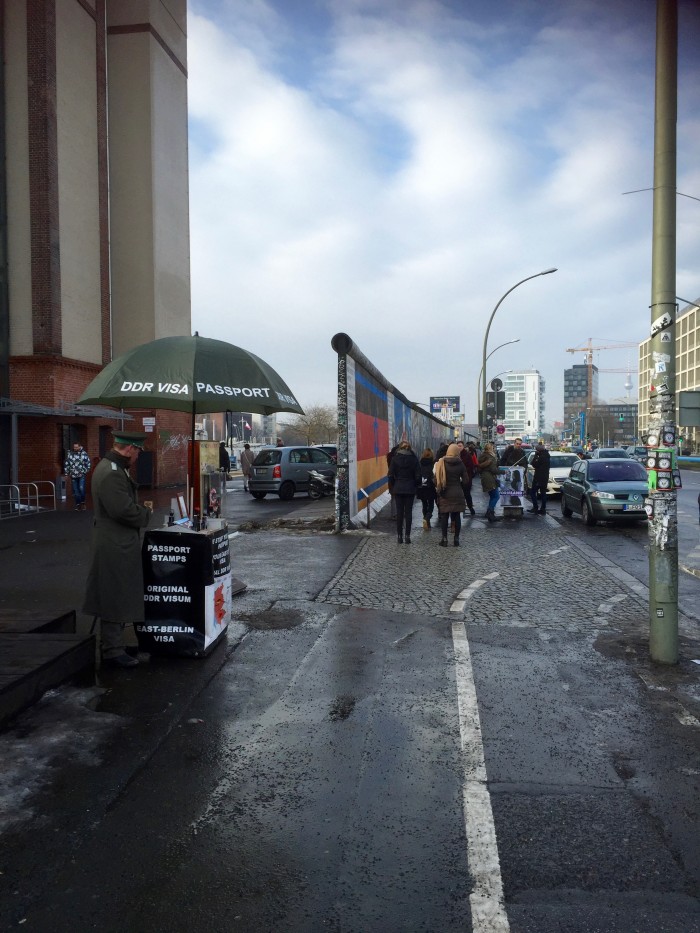 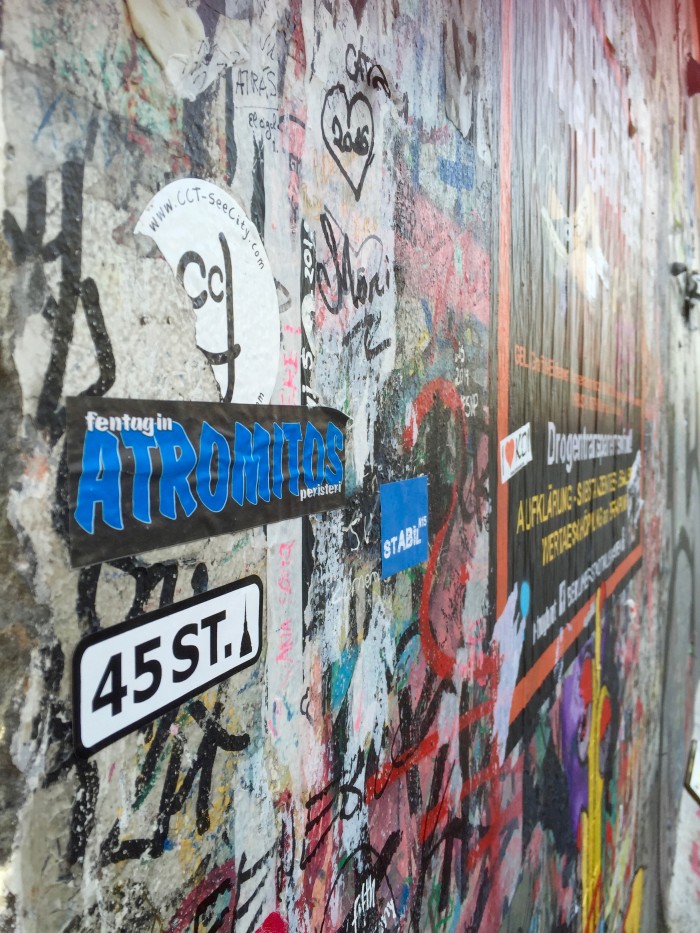 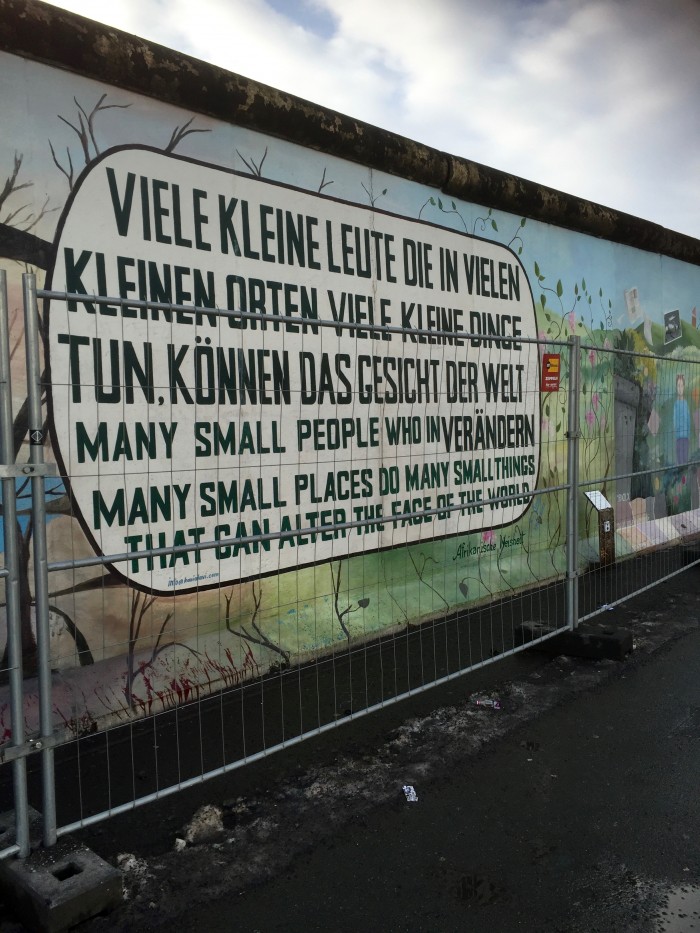 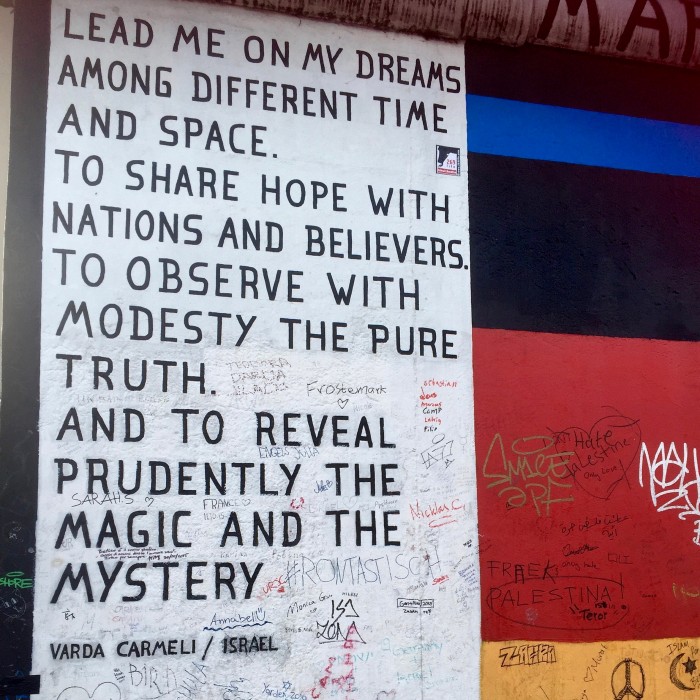 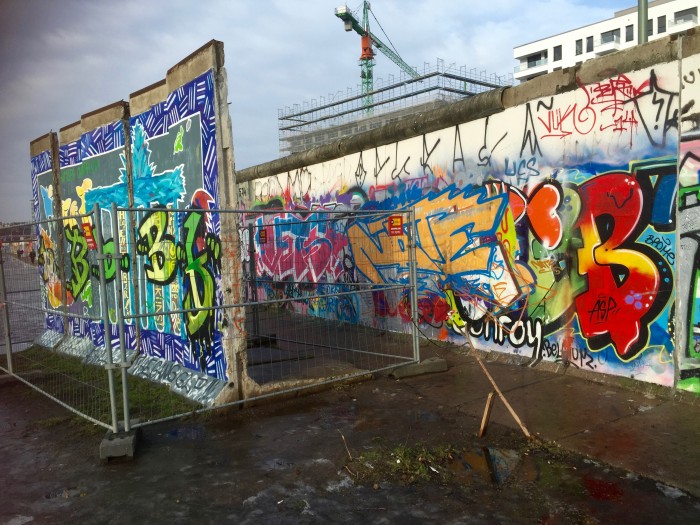 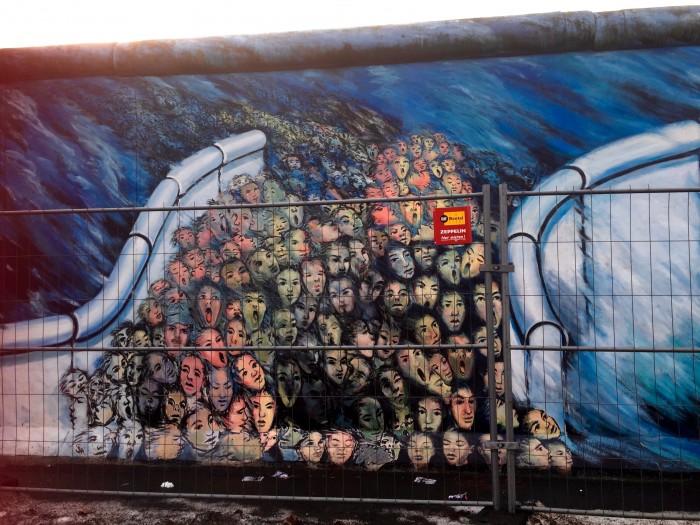 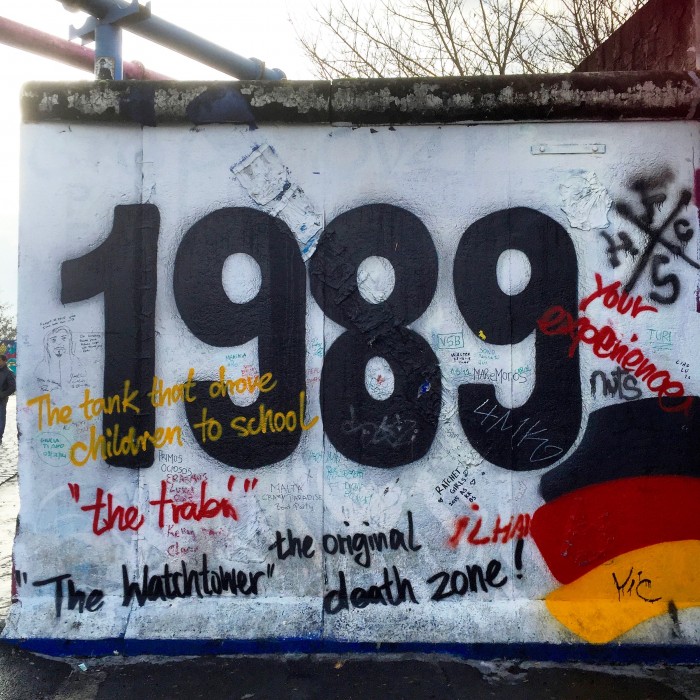 A good year for pulling down divides.

And you’re back, just like that, tummy filled with sauerbraten and fine German wine.

I’m sure that you and your mother charmed Martin such that he’s still talking about you to his friends in the Fatherland, vowing to make his next vacation in your neck of the woods. You did remind him that his folks lost the war, right? I know, he’d just say, “no”.

Ooh no, people don’t venture to my neck of the woods without special visa’s, protection and having undergone my secret, psychological testing.

Ahh, there you are. I was worried. You don’t call; you don’t write… what’s a blogger to do?

Annnndd… I’m coming to the conclusion that you are some sort of playgirl, or something: jaunting off around the world at a moment’s notice, speaking several different languages and obviously not averse to a glass of Pimms or Bolly.
And you never mention work… which means that you don’t. Yes, it’s all coming together now.

I know, I’m so fly-by-night and flippant like that

I’ll have you know that being an international Playgirl is very HARD work indeed! you’ve got to know just how to behave and just what to say. One slip of the tongue and you’re in a right mess.

Checkpoint Charlie looked a little different when I went through it back in 1984, the wall was a bit more complete too, I would love to go back and see how different it all is.

I should imagine it’s a lot different. Well don’t go in winter if you do go back; it takes ages to get warm again.

I think you stole his heart, Jules, because he was flirting outrageously for a German man. Lovely pictures, but I wish you’d visited Hitler’s bunker too. I think it’s been converted into a car park or something.

I did want to see that yes, Mr. Gorilla Bananas, but it was too far out and now part of the Aldi car park!

Haha…loved the conversation between you and Martin! And hats off to you and your mum for braving the winters and traveling despite the chilly weather. I’m sure the German wine helped a bit! 😉
Lovely photos, especially the graffiti art!

Hey, Aditi 🙂 German wine…hmmm..better by smell and colour than by taste but the Schnapps had a warming fire to it!

Ah, the trademark German warmth and hospitality. Glad to hear you poked through the armor in the end (Schnapps is the Deutsche version of a peace pipe, you know).

Loved this post. Love your blog. Will be back.

Trademark indeed.
Armour won’t stop me finding a weak spot. The British do not expect happiness, oh no, we don’t want to be happy; we want to be right.

Ah, so it was a peace offering. Well, I took down in one. Class.

Thank you Guilie (top name by the way) and for your fabulous comments and clearly impeccable taste!

i imagine stepping into any sports bar in Germany and there hangs a mini-replica of the World Cup trophy (not solid gold but gold-foil chocolate) along with tall, skinny cylinders of original draft with frothy froth (and i don’t even like beer), yummy double-salted pretzels, delectable little bratwurst-on-a-stick, and a new item on the permanent menu to commemorate the Brazil match: Buy 1 Get 7 Free.

can you tell i haven’t eaten well in weeks? *)

I think you’d favour the Apfel Strudel. A nice little tart with a spicy dusting and some vanilla cream. *)

I’m right there with you. I couldn’t do it. The cold would KILL ME. (You think I joke. Do you know how warm it is in Florida, always?)

You won with French. Hah! Such a fun story.

Yes, you warm climate Americans… it’s why you’re so nice and have such sunny dispositions with your “Have a nice day” malarkey. We’re too cold to care over here if you have a nice day or not. It’s only nice when you’re back indoors with a nice cup of tea and the fire on.

Who’d have thought you could ever win with French. There’s an oxymoron…

Loved the conversations between you and your mum. And the humour of your bar encounter with Dr No. And the photography was to die for…which is apt.

Hello Denise, sorry for my tardiness but I’m SICK. There are so many germs (not germans) round here.

Well I’m glad you enjoyed it and thank you for your visit and compliments. 🙂

I didn’t know German had any tuk-tuks. They’re anti-engineering and we all know how Germans get all misty-eyed over proper engineering. Or did I just reduce an entire country into a cheap stereotype? Wouldn’t be the first time.

There’s actually a two-panel section of the Berlin wall in a office tower courtyard in Manhattan. Can you imagine transporting them?!

Yeah, it wasn’t exactly Vorsprung durch Technik, let me tell you. More online with the Trabant.

You just have to have a piece of everything you Americans dontcha!