I’m Getting Medieval On Your Ass 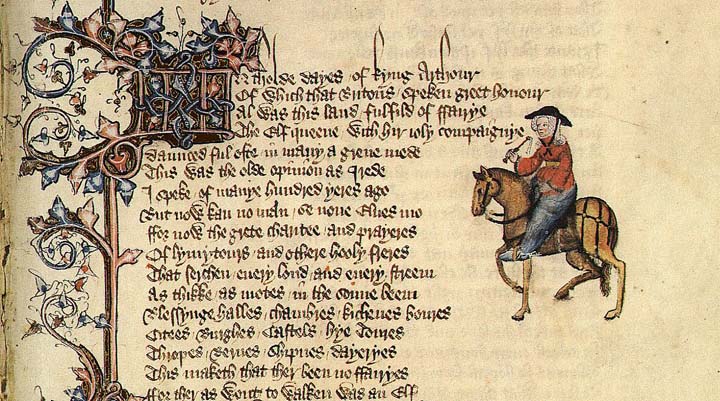 I very nearly let you talk amongst yourselves because I’m way too busy to be whimsical, but, as luck would have it, I listened to a piece on the radio about medieval marginalia.  My interest piqued and just for you lot I went and did a bit of research.

Living in a medieval town, I wanted to know what people got up to as a form of art philosophy back in the Middle Ages.  Blimey, that mead must have been good stuff.

Medieval marginalia is basically doodles (very explicit and expressive I might add) in the margins of a written page.  These were usually put there as an aid to understand the text for those who probably couldn’t read or didn’t get the gist.  Dear Lord knows what some of these rapscallions were writing about because just going from the pictures, it looks pretty debaucherous to me.  I must confess to slight envy as I thought I held the torch on dark, twisted comedic tradgedy, but apparently not.

I think it’s time that marginalia made a comeback in paperback novels although I’m not sure it would lend itself well to Kindle.  I’ve chosen a few choice images below as I thought it would be fun to play “Give the picture a caption.”

There’s a prize for the winner.

Picture 1: Why the backstop became popular. 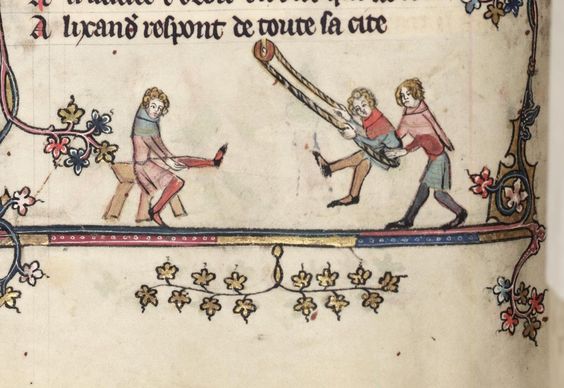 “If I were you I’d keep those legs crossed, swinger.”

Picture 2: Save a Horse, Ride a Cowboy. 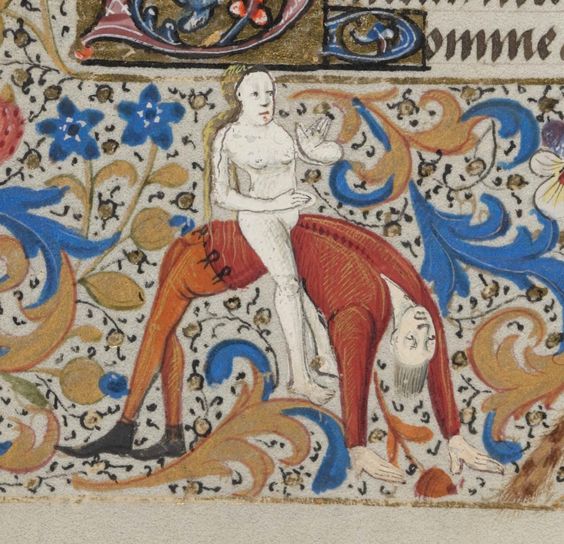 “I’m sure it didn’t look like that in the Kamasutra, darling…”

Picture 3: The Ball and Chain. 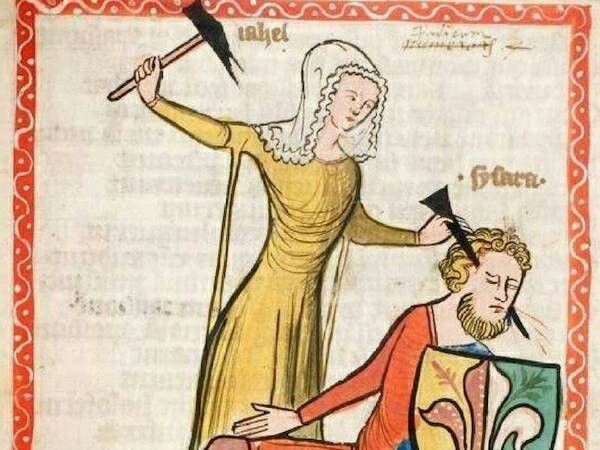 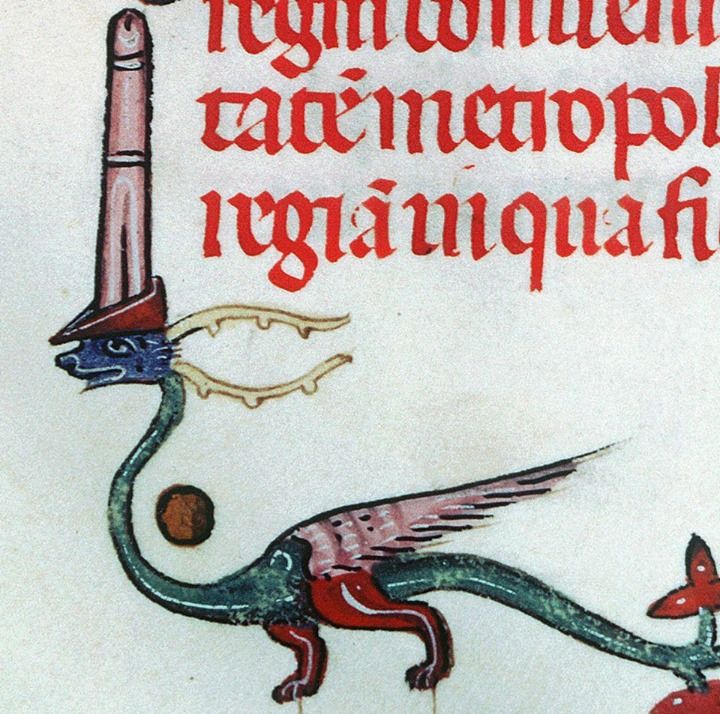 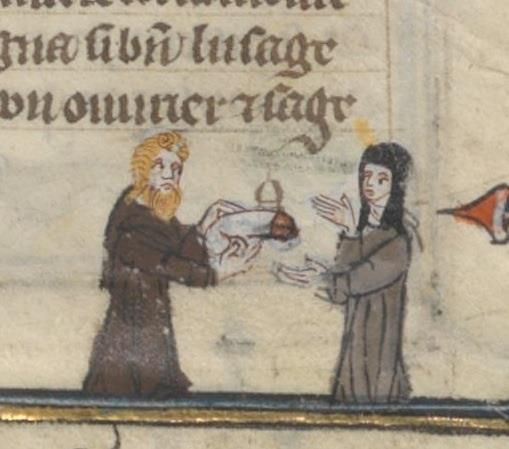 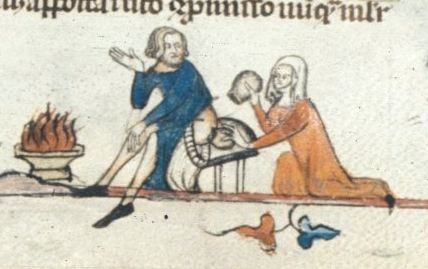 “Smuggle your own effing cheese next time!”

Picture 7: Not My Circus, Not My Monkeys. 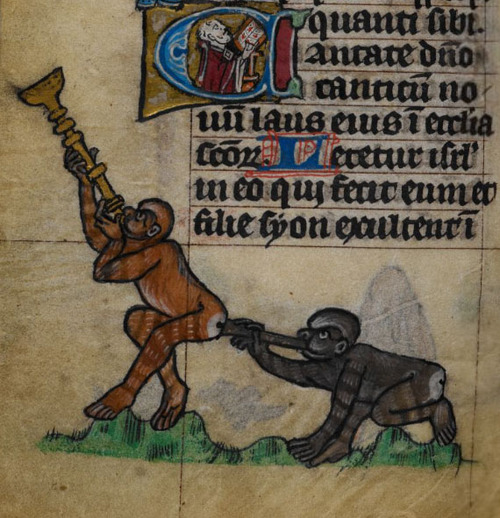 “Join the band, they said.  Be part of the team, they said…” 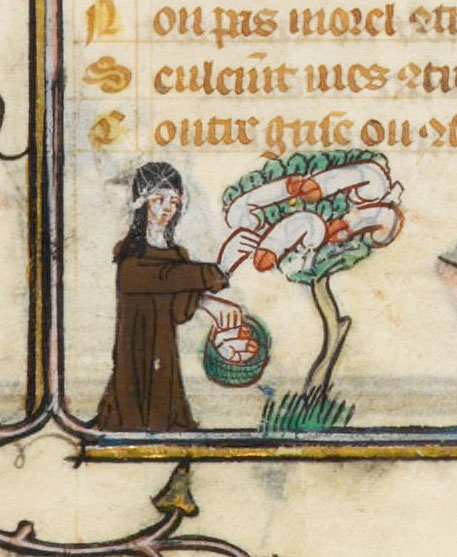 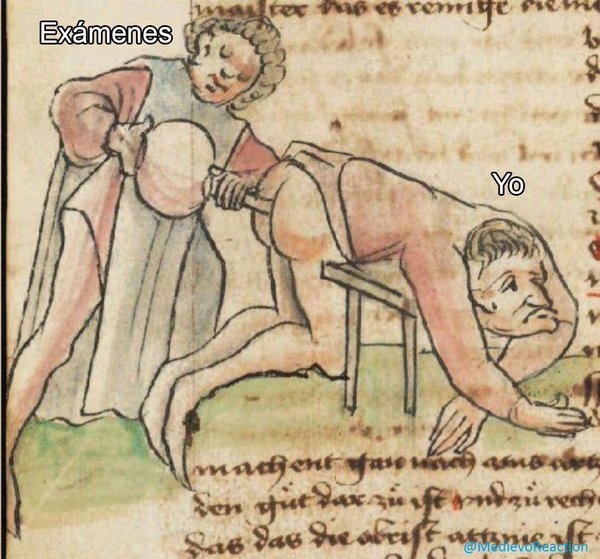 “Look, stop being so miserable.  This is all the rage.  You’ll lose a stone in a day!”

Picture 10: Not His First Rodeo. 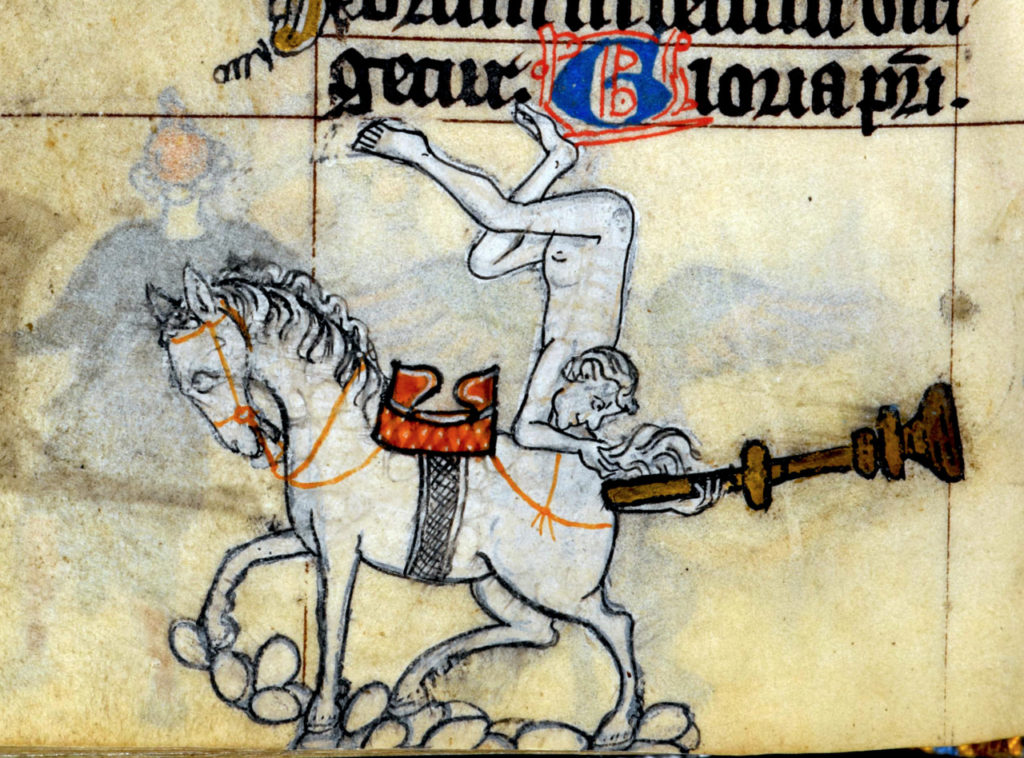 With the absence of the internal combustion engine, increasing horse power took on new skills. 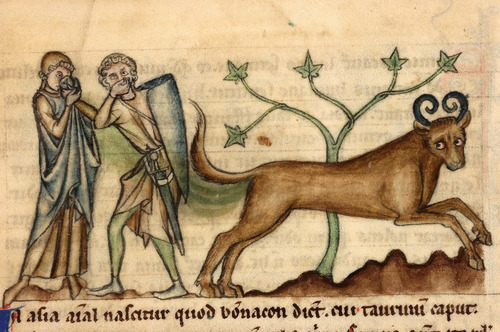 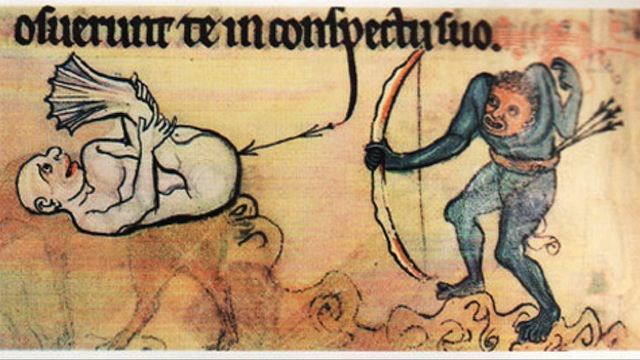 “Brings a whole new meaning to cockswain,” said the archer…

As you can see, I’ve swiftly moved on from the wisdom of the Stoics.  But I will leave you with this:

The Saga of Grettir the Strong:  “A tale is but half told when only one person tells it.”

So if a young lady says that she wants “Big Ben”, does that mean the clock?

Hahaha! No. Very good, Larry. This Irn-Bru suits you, Sir!

On the subject of Big Ben, he has actually lost his bong, so to speak. Ben bongs no more. Due to necessary repair, he wont drop a clanger for 4 years.

Jules, this post is hysterical. Gives new meaning to “hey, watch this, hold my beer”.

Your captions are terrific! Glad you’re back in the groove. 🙂 I can’t add a word. Well done.

Heh! Good one, Nox!
But, you definitely wouldn’t let go of your beer now would you! 🙂

That’s it now. All future blogs must be accompanied with naughty drawings for the hard of reading
Hilarious!!

I’ll see what I can do but I’m no artist. Not that kind anyway 😉

Ha! These were great. Well done Jules. Thank you for the smiles. ☺

Much needed, eh? You’re very welcome Tracy and if it’s given you a laugh then I’m happier! X

It’s all very well people sticking foreign objects up their backsides, until they can’t retrieve them 😱
Then it’s the good old NHS to the rescue !!

Heheheh! But look at the laughs you’ve had! Well, I’ve had a few round the pub table thanks to your stories!

I won’t comment on Big Ben’s Bong but, as a Medievalist, I applaud your research!

With apologies to The Angelic Doctor.

Leave Big Ben out of it, please. This situation is causing national anxiety. 🙂

The subliminal message from the last doodle is clear enough – a man with webbed feet should meekly submit to having arrows fired into his back passage. I can’t argue with that because I don’t know what the context is. Maybe having webbed feet requires deep buggery therapy. I’m not convinced the maiden knows she is plucking male genitals. She probably thinks they are some kind of fruit. Why should she care if she gets a good price for them in the market? The joke will backfire if she ends up with hard cash in her petticoat.

Mr Gorilla Bananas, I think the merman is begging for buggery by the looks of it. Maybe he needs to have an arsehole made and this kind archer is helping him by trying to shoot him one. Merman is doubled over with the pain not being able to release, methinks.

Ain’t nothing wrong with hard cash in a girl’s petticoat.

mah dahlin, medieval is where I live! well where I once lived. the phoenix you know today is the reincarnation of a soul who once lived in the Medieval age. this is real! this isn’t like those alien-abduction things. I was a page. with a bowl cut. like that boy on Disney’s Gummi Bears. every page back then had a Little Lord Fauntleroy haircut. those were exciting times! those were the best times! well at least if you weren’t a serf. the mutton, the moats, and the chastity belts o the chastity belts! every boy in that time dreamt of becoming an ironsmith so he, too, could one day smelt a key from alchemy that would unlock the heavy chastity belt of the fair maiden. the only catch was everyone died when they were 20.

except me, I had a secret elixir: a glass bottle of Gummiberry juice with a cork.

You were a page in a green notebook!

The wild rabbits were the thing. Savages with bob tails. They were the ironsmiths and the key holders. Why do you think Anne Summers named the rabbit “The Rabbit” …right.

The secret elixir is Hell Dust. Always was, always will be.

My sweet, I think you could be the next marginalist. There’s a niche; fill it! *)

I particularly like the regretful expression on the face of the mythical beast in #11.
And I’ll admit to being utterly stumped as to what mythical beast has hooved forelegs, the hind feet of a lion, and deadly poots. (But I suspect it may have eaten a bad burrito from a Mexican(ish) restaurant in Hunter Mountain, NY. 😉

Never fall for puppy eyes, Mike – that will be your undoing.

I do believe said creature is a calygreyhound. They’re the latest Californian fad if you want one. I think the Kardashians are getting a couple to boost viewing figures.

This is where the half frozen burrito started….;)

Excellent!
OK, I’ll give it a shot:
1. “This is going to hurt you more than it hurts me!”
2. “Anyone know the way to Banbury Cross?” (think about it)
3. “It’s your turn to have the headache, tonight, dear.”
4. “I’m the fuckin’ bollocks, me.”
5. “I have reason to believe you have been drinking, Madam. Please blow into this…”
6. “Well nurse, I was just getting into my pantaloons, when I slipped and fell onto this upturned radish…”
7. “Alright, no need to shout about it… I’ll suck the poison out!”
8. “No, I asked for my own WILLOW tree!”
9. “Keep going: only three more and we’ll have enough balloons for tonight’s party.”
10. “Thank God that’s out: now I can unblock my toilet.”
11. “I did warn you not to feed him left-over Brussels sprouts!”
12. They were now three days into the course, but still Eros hadn’t got the hang of it.

Hahahahaha! You cock horse, you!

You are the prize winner for sure. Excellent work. This French France suits you.

Now, where do you want your prize sending? 🙂

A prize? Golly.
Depends what it is really 😉

Masher, it’s a surprise. And you know how good I am at surprises….;)

Thought I would just pop-over to see what things a proper English lass might be up to.
Uh-huh. I see.
Popping back now.

Hahahaha! ‘ello, Terry! Welcome to the cheap seats! Good to see ya! And, what do you mean you’re popping back? There’s no escape now. There have been people on here for 8 years trying to get away and can’t 😉 It’s like Hotel California here. You may suffer in silence like the rest of ’em. 🙂

Jules My Dear, you know very well that I am a sensitive, fragile, individual, unaccustomed to such bawdy discussions !
But, as I went ahead and subscribed to your lewd writings, I guess I will bear my cross.

btw…got any nude pics of your mother ?
If not, do ya wanna buy some ?

Terry, I was a little worried when I first saw you here for that very reason. I sincerely hope that hanging around here doesn’t lead you astray and ruin that gentle, delicate demeanour of yours…..I’ll try ever so hard to be extra sensitive towards you as you know I can be 😉

Ha! Nah – seen ’em before. They only sold on eBay for 50 pence each. Rubbish.

I know. That’s where I purchased them. 😉

LOL! You are the King of comebacks, Terry. I like that 🙂