I’m In The Mood For Chancin’ 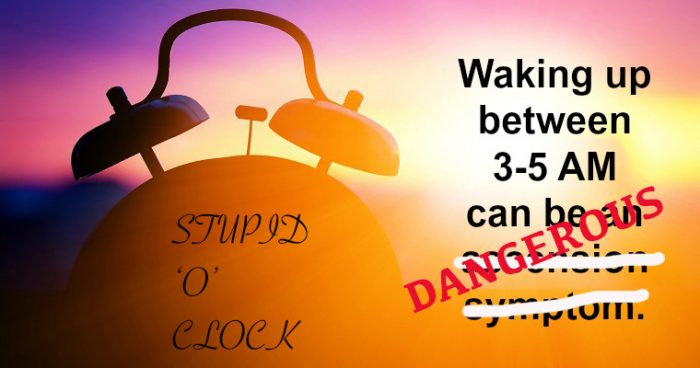 I’m tired to the point of hysteria, and not the funny kind. I had to take people to the airport at stupid ‘o’ clock – AKA, 3 am. I set my alarm with great consideration of the fact I would likely be grumpy and half blind at such an hour and would need a twenty minute tea-athon to get me revved up.

I went to bed two hours earlier than usual to make up for such an early rise.

Going to bed early when it is not by choice makes me feel like a kid on a school night and I actually get building resentment. I think this should be a recognised condition by Doctors as it causes palpitations and acid reflux. I tossed and turned and tried to think of nice things but could only conjure up hatred. In the distance I could hear some faint, yet highly annoying alarm going off; the kind that is persistently irritating to the point of torturous. I had a nagging doubt that maybe I hadn’t set my alarm properly. Did I put the correct three ‘o’ clock? Did I plug the charger in properly? I didn’t turn it off, did I? Naturally, I had to leap out of bed to check it again. Why is it that when you have to be somewhere important you automatically distrust everything?
I woke up every ten minutes just incase. One of those times I lay there for ages trying to ignore my bladder’s request to be emptied because I NEEDED TO GO TO SLEEP.

I fell asleep thirty seconds before the alarm went off which sounded like someone had just started a nasty rave in my bedroom and very nearly caused projectile vomiting.

I brushed my teeth with my eyes shut. The toothpaste didn’t taste very minty and wasn’t frothing up. I turned on the light to look at my Colgate Extra Fresh, Quadruple Action Attack, Fluoride mystery, magical paste only to find I’d squeezed my cortisone cream on my toothbrush by mistake. The cream, cunningly packaged with the exact same red and white Colgate stripes, that I leave out to soothe the GAZILLION bites I have from mosquitoes that seem to have such a tasting for me they come from other continents to hunt me down. BASTARDS. But that’s another story.
And this cream, that never, ever, EVER stops my bites from itching as it claims, works a sodding treat if you put it in your mouth where it numbs better than a dental anaesthetic.

It made my tea taste absolutely vile. Even the second cup. I moved onto coffee x three. That sent me into some kind of nervous, edgy state where my legs went restless. My mosquito bites started to itch so I stabbed them with a fork and made them bleed. I’m really not a morning person and I’m most definitely not a pre morning person.

Once in my car I let the numpty with the ringing alarm have a taste of the Ace of Spades with extra bass until his house shook and I saw a bedroom light come on. I then went to fetch my passengers.

“Oh how inconvenient for you,” I replied. “Having to get up so early to go on holiday and enjoy yourself. What about me? I’ve got to drive back home and try and do something constructive with my day. It’s ME who needs a bloody holiday!”

“You’ve just been to America for three months……”

“That was an adventure, not a holiday,” I snapped. I hate smart arses.

Driving at 4 am is a dream because nobody is on the road and you can fly like a bird soaring with speed and freedom. Unless you’re me and have had three speeding tickets in the last year. This means even with open tarmac and a car that is biting at the bit to be released you have to do as you are told and instead, see how many different expletives you can shout at the speed cameras that line every sodding street. I may as well drive a Motability scooter. But that’s another story.

Just before I reached the motorway I noticed that I was short on fuel and pulled into a petrol station to fill up. As I was standing there with my pump in the silence a fuckwit of the highest order came tear-arsing onto the forecourt at about 90 miles an hour, music full blast and handbrake slid his multicoloured panelled beater across the front nearly taking out a petrol pump. That would’ve been interesting.

A great hairy, oaf of a man got out and staggered towards the window of the trembling, skinny Indian cashier. We all looked on agog as the wide eyed, coked off his tits bloke looked furtively around with that kind of menacing glare that says, ‘I feel like stabbing someone seventy five times.’

My passengers were safely locked inside my armoured vehicle and the forecourt attendant behind his smash proof window and locked door. There was only wind between me and the ogre as we stood outside alone in a face off. I held my stare and clenched my teeth together which didn’t hurt because the cortisone had a miraculous, lasting effect. Like my morning hadn’t been bad enough, I was not about to show weakness and fear to this muppet even though in my head I was thinking of how I could blind him with the diesel coming out of the hose if he got any closer. He shouted something incoherent to the shrinking guy behind the window. I replaced the hose, annoyed that my skilful staring, poker face had made me go a few pence over my required amount of fuel. I pride myself on being able to stop on round numbers. I opened the car door to get my credit card to pay.

“Don’t go over and pay yet!’, my passengers hissed, “He’s frikkin’ tapped. Wait ‘till he’s gone.”

I looked at them and smiled. “There are three reasons why I am not scared of that man.

1: You two, my passengers, are young strapping lads, one of whom is the current, amateur heavyweight boxing champion of this area.

2: My car was built to drive up rocky mountains and through rivers so driving over him and his tin pot car if necessary will be a breeze, but most importantly…

…’I’m in the mood for dancing…romancing…ooh..I’m giving it all tonight…’

Brilliant!
I actually laughed out loud reading this! x

Happy to add to your joy! 🙂

BTW – Your English humor has returned!

Yes, a taste of reality does that! Mind you, it’s a good job because the dark side of me brings the ingredients for writing which I so desperately need to be doing!

I’ve done that, except in Los Angeles, there is a lot of traffic at 4 am, and if you have to drive “back home” after the drop, off, a 40 mile drive will take 3.5 hours, and like as not between there and here, I will end up taking a hostage there on the freeway, making traffic worse. I’m sure that you never heard that of me, but it’s because fifty other guys had hostages out there on the highway at the same time and nobody cared.

Today if an early morning departure is called for, or an unreasonable trip in traffic is in the offing, I rent a limo for them or I get one of those airport vans to pick them up curbside at the house these days. Maybe it’s because I’m less loving than you are and am not as willing to put myself out.

I could not sit in traffic for 3.5 hours to get somewhere 40 minutes away. THAT would tip me over the edge big time.

Larry, I’m going to Heathrow at the end of September – please send me a Limo. 🙂

Yes, he must have been a big, cuddly Teddy Bear – or possibly a cross-dresser. You can never judge a book by its cover. Speaking of which, are you sure your ‘mosquito bites’ weren’t actually the work of bed bugs, Jules? I would recommend steam-cleaning your mattress as a precaution.

Cross dresser more likely.
No, definitely mozzies. I have a new Tempur mattress. I could never be in the Congo, I’d be eaten alive. I’d have thought Gorillas would have a cure for stopping these blighters!

We do – we’re hairy. I’m not suggesting you go French though, Jules. 🙂

as i always say, Time Does Persist.

now that you’ve had a spiritual awakening, and paid the membership fee, Father has granted you access to the next level:

congratulations! you have officially leveled up! *)

What a wonderful quote! I hope now I’ve paid up he will repay me with some decent kip! *)

Did it occur to you, Dear Girl, that the ogre was angry because his radio was broken and stuck at an “Easy Listening” station rather than the “Death Metal” station he preferred? That would make anyone homicidal. Who knows how much danger you were in? 🙂

Also, what do you mean you “hate smart arses???” I think we’re all in very, very big trouble, then! 😉

Ah, I didn’t consider that. He was a scary looking fellow but I didn’t show an inch of fear!

Haha! Anyone who isn’t a smart arse with a good sense of humour doesn’t last long on here! They’re my favourite kind of people 🙂

Off on holiday again, are we? About time.

I’m glad I’m not the only idiot. Shaving gel though….ewww.

Yes,Masher. I’m in desperate need of a much needed holiday after all I’ve been through 😉