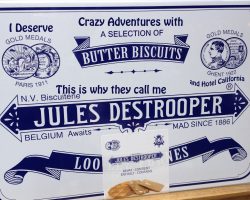 I felt a sense of deja vu as I sat opposite my Mother on the train.
“Watch your bag” I said sarcastically.
“Oh don’t be silly” she retorted.  “We’re going to Bruges not Barcelona”
“ It begins with B. I’m not taking any chances.” I said “ Besides, the thieving bastards from La Ramblas are probably hot footing over to the Christmas market as we speak. In FACT, they’re probably using your credit card to get there!”
We continued in silence.
First stop was London for a day out and overnight stay before we had to catch the Eurostar to Brussels at stupid ‘o’ clock in the morning.  Whilst I love London, hitting it the Saturday before Christmas was not a wise move.  Most of the worlds population had apparently landed there and the streets were heaving with masses of bodies like they were going on some sort of pilgrimage.  And annoyingly, always in the opposite direction to which we were heading.   A five minute walk took days.  Eventually, battered, lethargic and stinking of sweaty tube station we made our way to the hotel.  Now normally, when I go away with My Mother I am used to posh accommodation because that’s how she rolls.  On this occasion she had picked a simple hotel, very close to St Pancras Station to make life easier.
“It’s called Hotel California” She said looking around as we stood outside Costa coffee.
“ Welcome to the Hotel California..” I began to sing.. “Such a lovely place…. ERRR REWIND.
Now one might be fooled into thinking this was some chic little boutique hotel with the the warmth and style of California.  From the outside it didn’t appear too bad but the inside was a very different story.  The man behind reception gave us the key and said “ You Live down many stairs.  Take staircase B and go down, down, down, turn left, go through door, turn left again, go through other door and find here”  His accent had a strong European lilt as most people’s in London do.
“Where do we go…what did he say..?” quizzed my Mother.
“ Let’s just go down here and figure it out” I replied lumping my fat little case along the ever increasingly, thinning corridors.
Down we went.  And down.  And around and back again.  Through doors and round corners deeper into the depths of despair.  I felt like Alice in Wonderland.
And there it was.  A little door right at the end.  I almost looked for a bottle saying “Drink me”
We opened the door and I can only describe our room as something that closely resembled a kennel.  There were two very thin beds and furniture you wouldn’t think twice about burning. There was one velux window in the low, sloping roof and when I opened it I could see a brick wall and just above that the street.
“ Nice.  I can’t even leave that open in fear of a dog pissing on me in the night.  I can’t even jump out and kill myself from this window” I quipped
My Mother was in fits of laughter and pointing at the bathroom.  When I say bathroom, I’m being over generous.  There was a gap in the wall, not even big enough to accommodate the smallest of doors and hence rigged up with a grimy 3/4 length shower curtain as a make shift entrance.  The bathroom was horrible and the towels they left out could have sanded down metal.
“Please tell me you don’t have irritable bowel”  I said to my Mother “ Because that tiny little shower curtain  is NOT going to protect me”
I refused to wash in said bathroom in fear of catching legionnaires disease.
We ventured out for nearby food and found only one suitable cafe/ restaurant.  It was a very odd place with nothing ‘normal’ on the menu.   There wasn’t even a baguette but the owner said he could knock up a steak sandwich if we wanted that.  How very kind. Of course, we accepted.
WELL WHAT A COLOSSAL MISTAKE THAT WAS.
Although the light was dim I swear I saw my sandwich move.   The blood dripped out of the sodden bread in rivulets across my plate.  I scolded myself inwardly for being such a wuss and tentatively took a bite as the owner watched me.
“ OH MY GOD” I hissed at my Mother trying not to wretch violently and slugging back my wine like a teenager.
“This is like ROADKILL”  I whimpered “ I”M BASICALLY EATING A LIVE ANIMAL!”
It was then that I decided to become a flexitarian.  This is a vegetarian that can still eat meat.  Just not the sort that’s like a side order for vampires.
On our way back to Hotel California (such a lovely place) I passed a homeless guy and was envious of his blanket and 6 pack of Fosters. I wondered if he’d swap.
Back in my prison bed, which tilted heavily to the left, I gingerly wrapped the featherless duvet around my fully clad body as we started to watch “Sleepless in Seattle” (how apt) on the tiniest portable telly ever. The film took several hours to watch in between the 19 adverts on each advert break (yes- I counted them) which seemed to happen every half an hour.  Marvellous.  Eventually, I tried to sleep to the white noise of the underground that was clearly running parallel to my bed and held on for grim death as each rumble shook me to slumber.
I woke early morning to a loud thud as my Mother had fallen out of her bed.  Thankfully with nothing broken except her will to live.
Roll on Bruges…..

Ah Jules, you should have stayed in the YWCA (which is not a lesbian anthem, to my knowledge). That area of London is where the ladies of the night ply their trade. Some of them service their clients in cheap hotels. Did you hear any strange noises?

If I’d have known hat Mr G B I could have kept warm AND earnt some money!

Ha ha ha. Things can only get better… I’m sure.

Of course they can. And yet still I wait!

Didn’t you write part one of this earlier? It sounds like the sort of holiday that makes a great anecdote but is hellish while you are there.

That was Barcelona where the robbing bastards were. Yes, always funny AFTER the event.

I found your blog through Goatman. The will to live–a fine hit!

Oh my goodness! What a fine story this is – unlucky that it is based in truth!

Seriously, the world would be a lesser place if it weren’t for the Eurostar. Loved this piece.

hahaha, Juliette! i am so sorry but i had to laugh out loud.
truth to be told, i had somewhat a similar experience at a hotel in Bayswater. it barely had space to fit my luggage and the bathroom took forever to churn out hot water, and of course there was a window so small i cant throw out my tiny asian body in case of fire emergency.
the sandwich! i got a game pie which had blood oozing out of it. oh yucks.
🙂

Oh my God. I shall never visit Bayswater!

And remember “you can check out any time you like, but you can never leave”!

Great writing — you have a talent.
Art, I call it.

Yes! That’s the fear- I will be haunted by it forever! Why thank you goatman and back at ya!

HAHAHA Jules, I was hungry when I started reading this, not anymore – thanks for that!! Sounds like you needed therapy after that overnight stay.

I’ve also got a hotel horror story, but that was in Paris. Dark, Dingy and well, we didn’t even want to get under the covers.

See at least I’m good for diets! Fear of going under the covers is NOT good. That’s when you know it’s time to leave!

OMG funny post. I have stayed in hotels in London which would make your toe nails curl. In fact they made other people’s toe nails curl because they were left on the carpet!

Thanks David. Eww, toenails left on the carpet. That is gross!

Hilarious! Made my morning – came here via Masher so hello hello from oooop North! We often tour Europe on our motorbike – nothing is planned – we just generally point the motorbike in one direction and go for it. Needless to say we have had some adventures I can tell you-safely catalogued in my little brain, now you have made me realise I should document the moments!

Glad to hear it Denise, it’s not very often I make people’s mornings! Id like to read your adventures so go for it!

#Kennel California…such a lovely place.. such a lovely place….# Thanks, Jules. Now I’ve got it on the brain. I suppose you didn’t feel the urge to paint that furniture… Love that term: flexitarian. I might steal it from you.

Listen, when your Mom falls out of a bed, it’s a sign. Get yourselves a better hotel.

Oh you knew that already…. 😉

It’s a very catchy tune isn’t it?!! Yes. Correct. Only posh lodgings from now on.