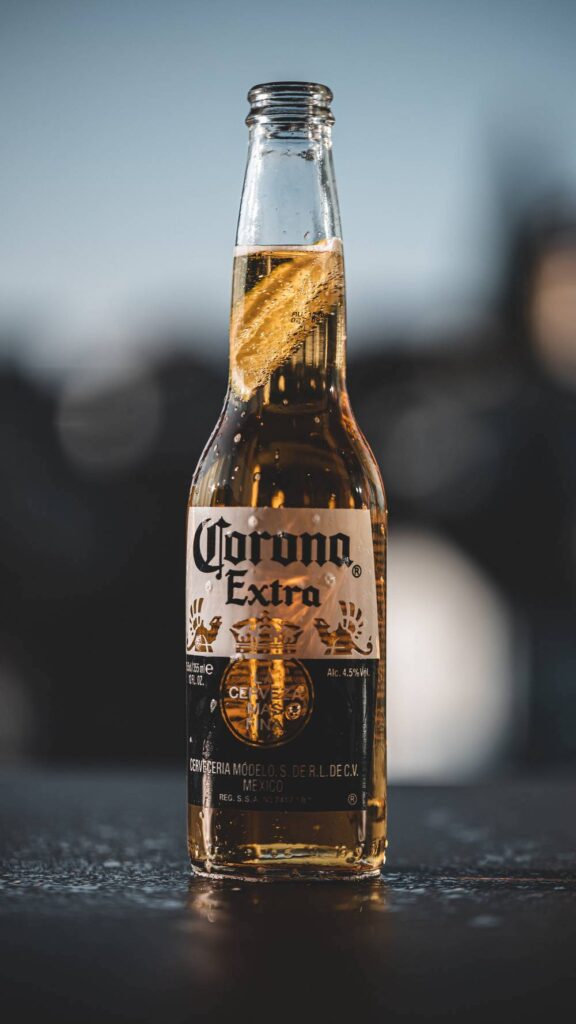 So, yeah. That’s how long it’s been. 17 weeks and 5 days. Not that I’m counting or anything but the last time I went to the pub was 11th March.  I don’t even feel British anymore.

But then, just recently, pubs were allowed to open – so long as they had new fangled stuff in place.

It’s not that I haven’t been meeting my friends at the park for a tipple or two.  I’ve had regular outings getting my arse wet on the grass, sipping my gin and tonic from my Chili flask like a 15-year-old, but there’s something ingrained in you as a Brit that makes the public house a second home.

So when my best mate said, “Shall we go to the pub?”  who am I to argue? Besides, she’s a nurse so I figured that one of the following things would happen:

She’d get the clap from the bar

We decided that it would make better sense to not go on a Friday night. Shandy steps.  We chose a rather nice pub that we used to frequent in middle-class suburbia at 2 pm on a Monday afternoon.

And we still had to book a table online. For a pub.

“Be sure to go straight to your greeter who will take you to your table”, the information stated.  “No standing at the bar – you will be served by the waiting staff” 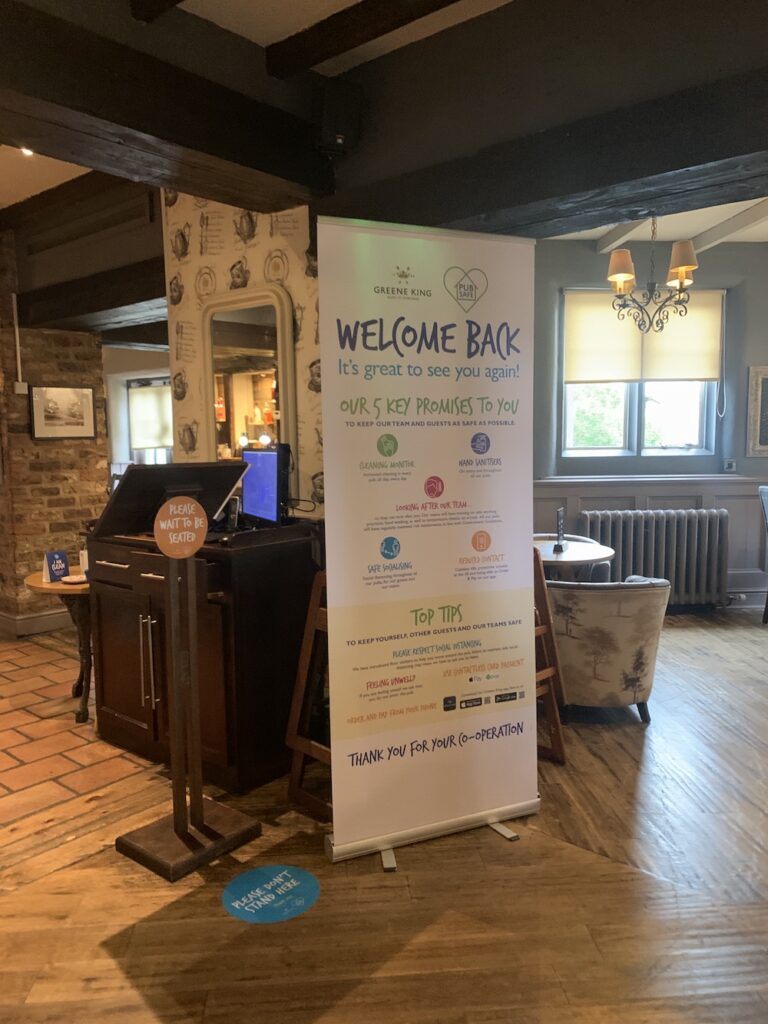 As you can see, they were very pleased at our return.  We were taken swiftly to our table by a young girl wearing Timmy Mallett glasses -come visa.  Once seated she took our order.

I glanced around the pub to get my bearings again.. 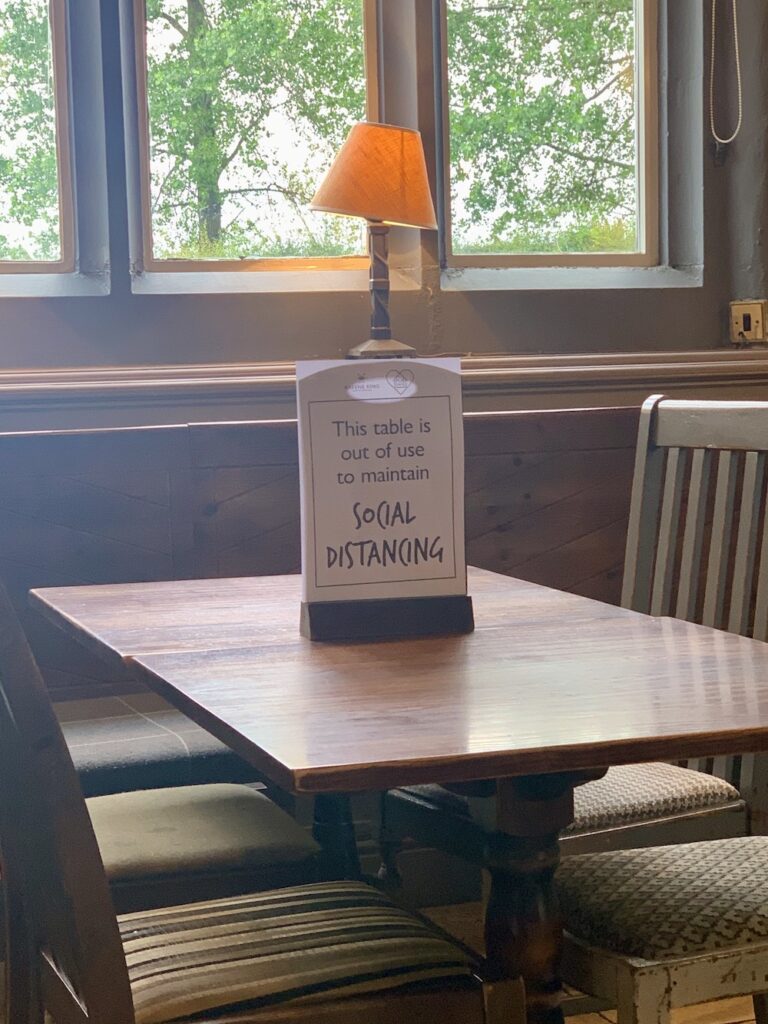 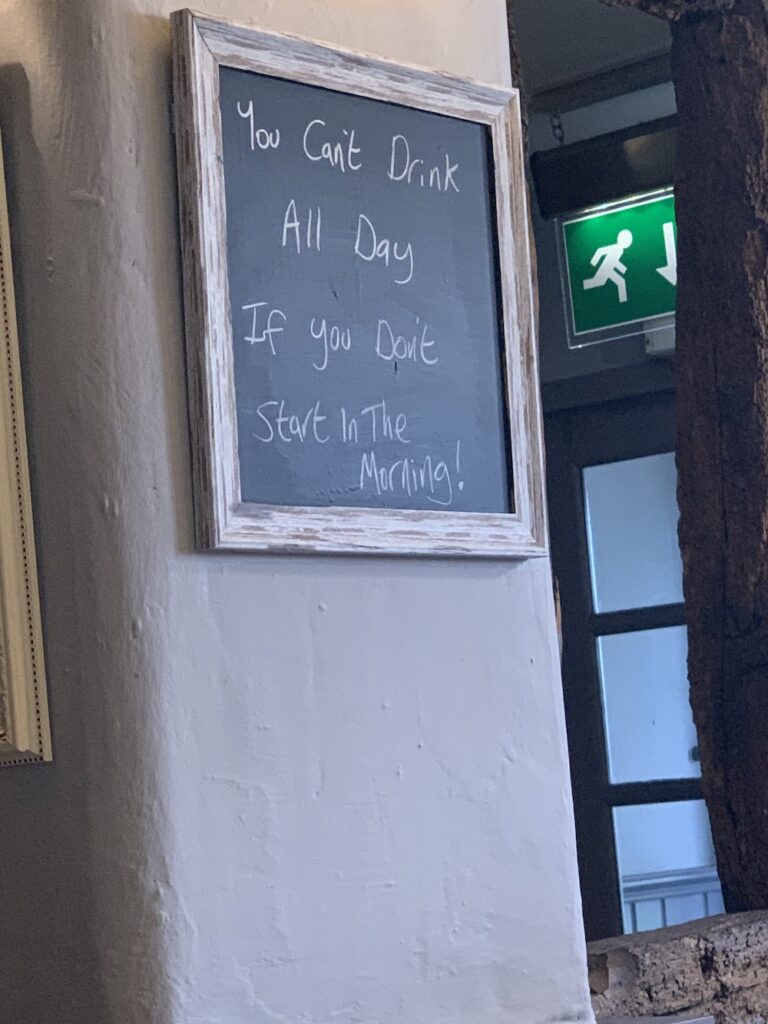 The girl brought our drinks over and we had to take them from the tray. This made no sense to me whatsoever because somebody’s already had their mittens around my stem so how is that protecting me?  Anyway, there I sat enjoying the comforts of the local with a rather splendid Pinot. 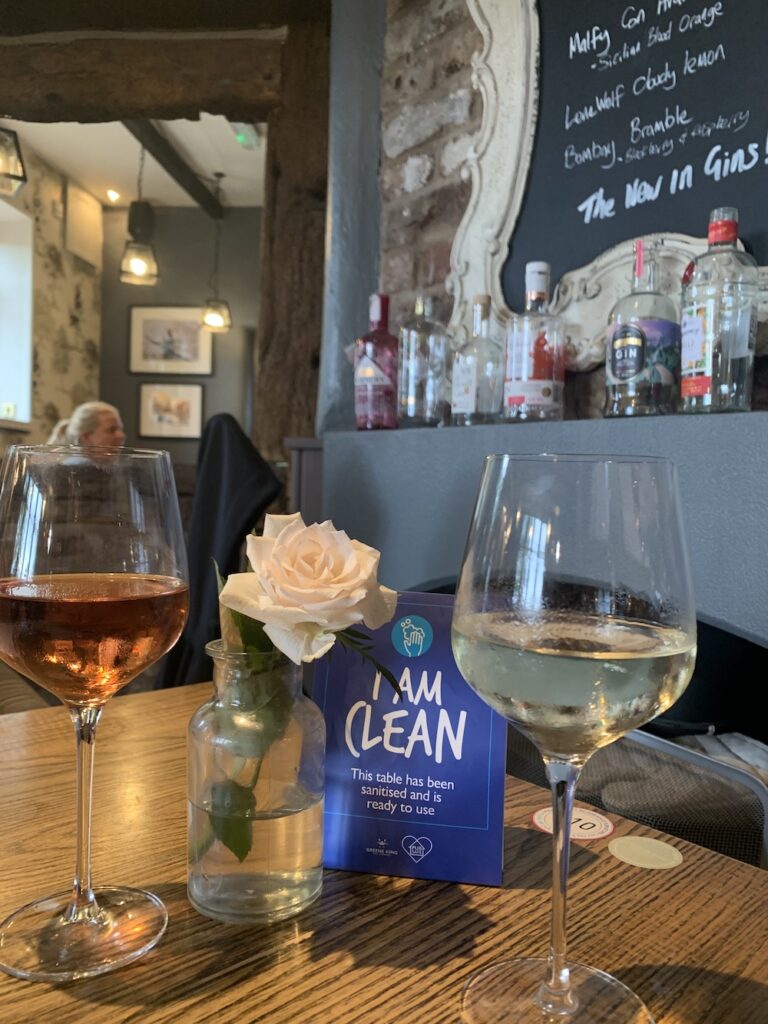 After a couple of these, albeit rather bizarre, I started to enjoy myself.  Never had a Monday afternoon been so exciting! At least not for 17 weeks and 5 days.

I decided I needed a wee so off I went to the public toilets. I went the wrong way because I didn’t notice the arrows on the floor.  Every place has since turned into Ikea and I’ve never stuck to that rule so why start now?  Far too many regulations to pay attention to.

Regardless of flaunting the rules I didn’t get barred and found myself face-to-face with a moveable sign on the main toilet door that I had to change from vacant to engaged.  Basically, the whole toileting area was mine.  If I wanted to wee in all 3 toilets and dance around naked, nobody else was allowed to enter.  Hmmm, let’s see how well that goes down at about half ten on a Saturday night. 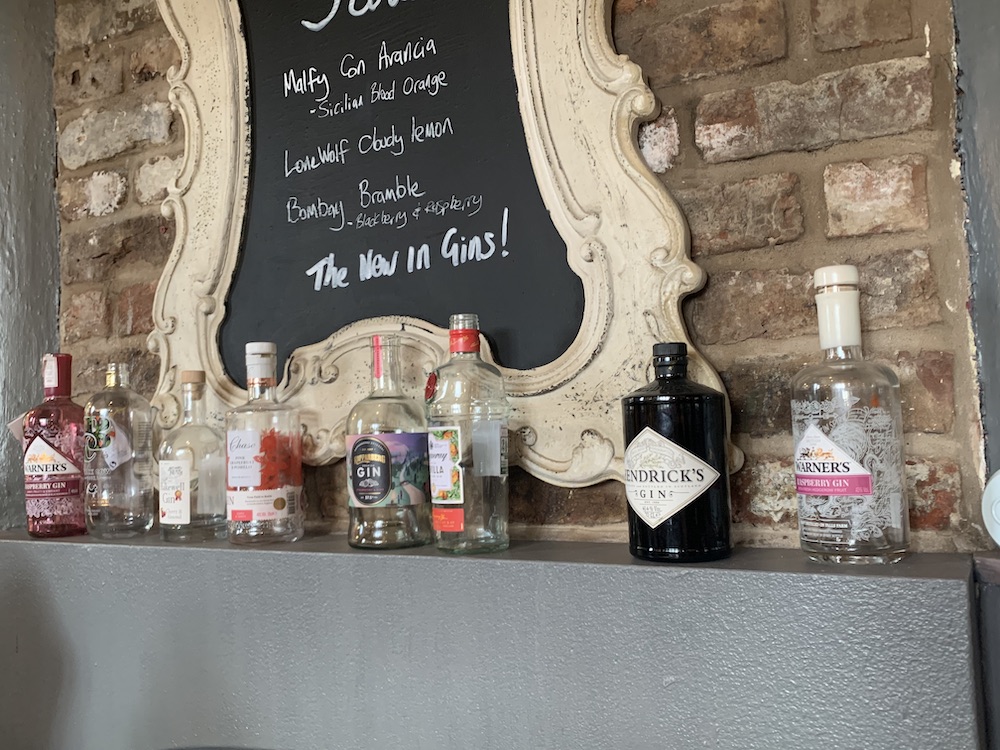 After 3 large glasses of wine each, we asked for the bill.

17 weeks of buying and mixing your own sauce makes you realise how much money you’ve saved.

“Let’s bring our flasks next time and sit in the pub garden,” my friend said.  This is why she’s a nurse. Nurses are clever.

We said goodbye to our friendly staff in their sexy PPE … 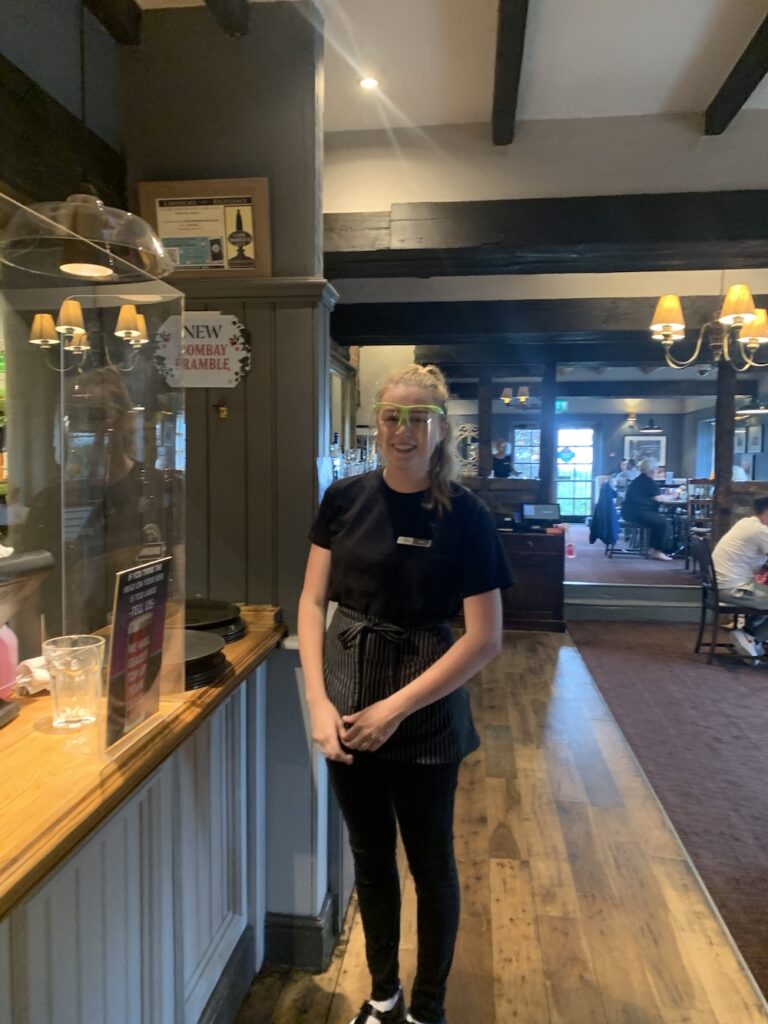 and I remember thinking, “It’s a good job she’s pretty”

I do hope you expected your friend the nurse to get ‘a’ clap from the bar btw! Not worth the bovver though is it. And £40, it’s a good job you two don’t drink like you used to, I’m not surprised the place looks empty.

It’s really not worth the bovver, Rick!

She didn’t get the clap.

Can you imagine how much that would cost? Thank God I’m a lot more sensible -ish!

In the colonies, “getting clap” means contracting a social disease. Getting it from the bar…well, you get it. And being a nurse won’t serve as a defense when she goes to the doctor for meds.

Forty quid… do they only expect the crowned heads to drink there?

Hello, LL! Yes, it means the same here. However, I found it amusing to play around with that concept because people have been standing outside clapping for nurses here too. She didn’t get either.

I think they spotted the Right Royal Jewels coming and thought they’d up their tariff! How rude! I nearly choked on my dregs!

Situation normal here in Virginia. Neither my horses, Roscoe, or I, or anyone I know (for that matter) has contracted the “Chinese Red Death”. That of course hasn’t stopped our idiot governor from issuing decrees and threats. Naturally, the sheep comply.

The virus thingy in the Colonies has been largely replaced with morons pulling down statues which allegedly glorify sins of the past (by white oppressors). Naturally, the morons never knew the statues existed until someone pointed out that they should be offended by them.

Well, you are well out of the way of the great unwashed so you’re somewhat protected and no virus, however nasty, will dare to be blasted with the unicorn gun!

After the size of the measures I have been serving myself at home during all of this, I think I’d find the pub a bit of a disappointment.

Yeah, you would, Masher. That’s why I went for wine instead of a spirit because I knew I’d be severely disappointed! But then I remembered how much a bottle wine costs at Tesco and got upset again!

my mom’s a nurse! Timmy Mallett invented the hammer. those two drinks are reminding me of my altar-boy days. remember, mah dahlin, Burger King bathroom, Burger King bathroom. yesterday a priest came up to me and asked me to weld his nave shut. if you want another pub-crawl experience, read Bathwater’s latest! love, me *)

Well, a big round of applause to your mum, my sweet!

And that’s the great thing about being an altar boy!

I need to catch up on everyone’s posts – I’ve been so busy it’s ridiculous. *)

Your nursie friend is very clever. Maybe go for a picnic next time. Don’t forget your flasks though.

She is indeed, Ian!

I like the sound of that – you too are wise 🙂

I have no desire to go to a pub (bar) here. I did allow myself a drink on a patio on the 4th of July but it gave me a bit of anxiety. I would not make a good Brit. I don’t really like to drink.

In Britain, we are taught to get past that anxiety by age 15!

I think pub life here has changed for the future. To be honest, a lot of people I know are now preferring drinks on the patio with friends as a better alternative.

Ah, the good old “wait at the table and be served” gambit. We have that here in Texas and next thing you know they’ll be demanding tips. Damn nerve. Just say no and keep walking.
Good to see they’ve chucked the Bristol BLM #friedchicken statue in the dumpster. Well done Bristol and hope for Blighty yet, what? I’m Not a betting man but money on the monkey the Marxists get a hiding.

Tips? Not over here, LSP. We are far too mean! Besides, not at those bloody prices!

The monumental crisis of Bristol.

£40!!!
Don’t you realize you could have gotten the 30th Anniversary Pinky Punky mallet with Wacky plaster and a Timmy Blaah! facemask for only £35 ( including safe, swift delivery) ??
And still have a fiver leftover for a nice bottle of MD 20/20 !

You must be wiser with your money in these uncertain times, My Dear Julesy.

Wow – I need you to teach me to be savvier, mucker!

Love always and a bit more then X