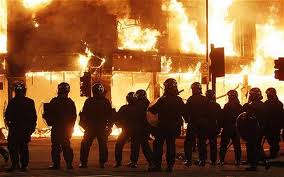 The riots.  I have to talk about it as I have had a few heated debates with people from different extreme viewpoints.

So this all started because Mark Duggan was shot by police and killed.  Now I know some people think that this is outrageous since he didn’t pose a threat to them and therefore the police should not have killed him.
I agree that life shouldn’t be taken so easily.

On the other hand he was allegedly a gangster carrying a loaded gun around Tottenham.  Now you you don’t go doing that unless you’re up to no good. Still his life was taken and a demonstration about this injustice was held.

Since then riots began in London causing mayhem and destruction all around. Buildings have been petrol bombed and burned.  Local business owners have lost their shops and some people have lost their homes.  Large stores have been vandalised and looted and this has now spread to other major cities in the UK. The emergency services have had to work incredibly hard to contain the fragmented groups causing this devastation.

Now whilst I believe you have a right to demonstrate against anything you feel an injustice about does this give you a right to traumatise everyday innocent people?  Does this give you the right to burn peoples cars?  How about your local business people who struggle hard to earn a living in their local community in a struggling economy. Should they be paying the price?

Why have a bunch of people jumped on the bandwagon and caused this kind of destruction to the cities where they live to make a point about injustice?  Isn’t what they are doing an injustice?

There are people who have conflicting positions on this and it has certainly polarised opinion:

There are those that believe people should be allowed to riot and make their point as strongly as necessary in order to be heard.  They believe that fighting against authorities that abuse their position are completely justified.  They say that these people are continually harassed or abused by police and treated unfairly and have now had enough and are making a point.  Looters are just a small part that would happen it any riotous situation.

Opinion 2
There are those that believe the people rioting are a bunch of thugs and vandals that are causing wanton criminality.  They have just jumped on a situation and used it to furnish their own pockets.  Looting stores, burning buildings and cars and terrorising neighborhoods for the Hell of it.  They believe these people should be severely punished for their criminal actions.
Where do you sit?

I’m all for freedom of speech and the freedom to demonstrate, however I don’t see that rioting is in anyway an expression of that constitutional freedom. In actual fact what we are witnessing infringes on the human rights of the majority by the minority!
I also fail to see what the current riots are demonstrating against?! I mean, fair enough the demonstration in Tottenham I understand – the riot that began at the end of that I don’t get. What I am seeing though is the coming together of large numbers of people who don’t accept that the rioting is OK – and perhaps that will begin to bring together communities once again…

There are legitimate ways to make your views known and people will take you more seriously if you don’t resort to criminality to seek attention. Thuggery does not lead to sympathy with your cause.

Where do I sit? on the thin blue line!!!
It is as mad as the old saying ‘fighting for peace’
It is a terrible thing to behold and I am glad I’m heading out of this bloody country for a while.