A Mixed Bag of British 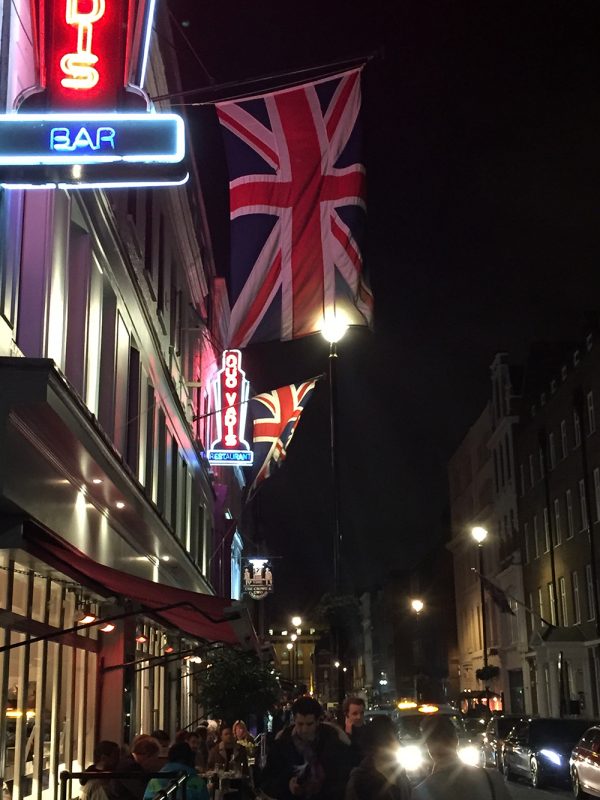 Four weeks late, dreadfully tardy and woefully lacking in whimsical tales. WELL I WAS BUSY. I thought about you all but I had lots of things to do. It’s very difficult being a superhero come spy come entrepreneur and sometimes I have to sacrifice my whimsy to save the world. You’re welcome.

Today I bring you a fuddle of delight from the past few weeks. Things that have caught my attention as I stand back and take a hard look at the world around me. 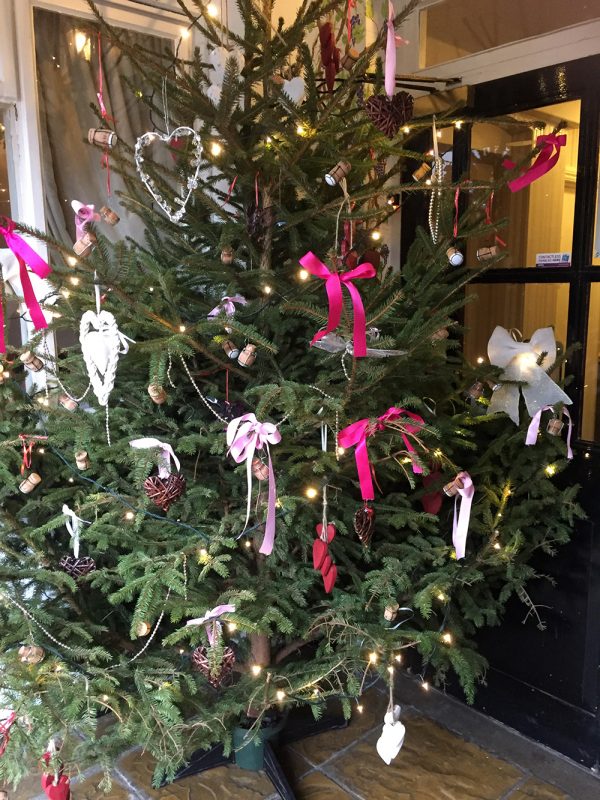 I went to the village pub to find the Christmas tree still up. I found Cockney Al and had a word.

“Hey, Al, you know it’s bad luck to still have your tree up, right?”
“Jules my little anthrax truffle. See, that ‘aint a Christmas tree, it’s a Valentines tree. And after that it becomes an Easter tree. See where I’m comin’ from petal?”
I have to admit I liked his style. Waste not. However, I think Al will concede to my superstitious point since after that conversation I won twice at ‘Sticky 13’s’ and walked off with fifty, glorious pounds. Nice.

I saw it with my own eyes. There, carved in Mansfield stone amongst many other grotesques, green men and gargoyles, a recognisable face standing proud in one of the arches of my favourite 14th century cathedral. A simple stonemason predicted the future some 700 years ago; blinded by the truth and light that shone down through the church spires, he was compelled to reveal the figure that would change the modern world through his simple craft. Oh yes. The truth is stranger than fiction, my friends. See for yourself. 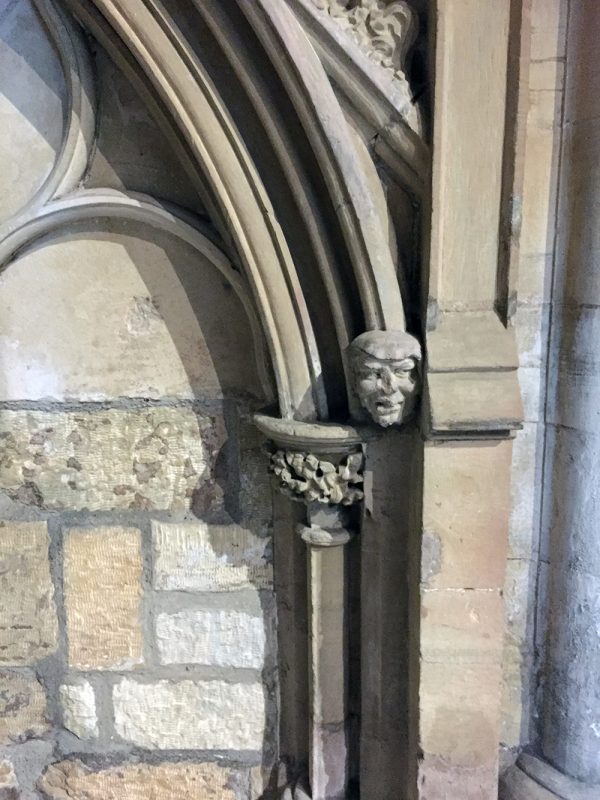 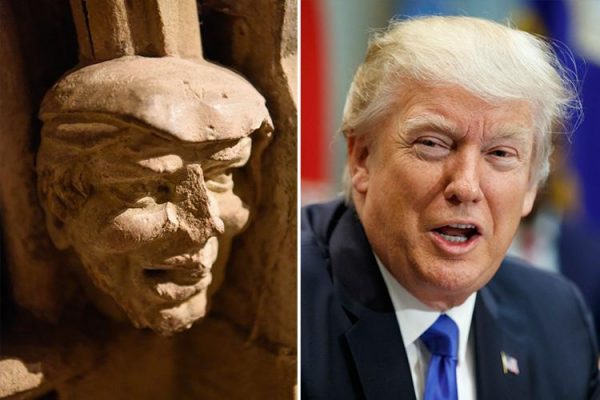 London Calling To The Faraway Towns

I took a little trip to the capital. You can never tire of London. Here’s what I found amusing on my junket. 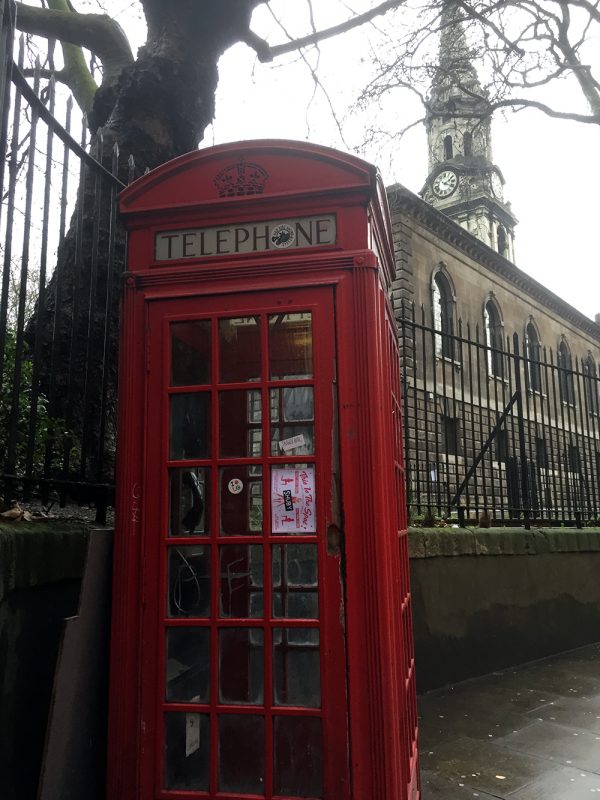 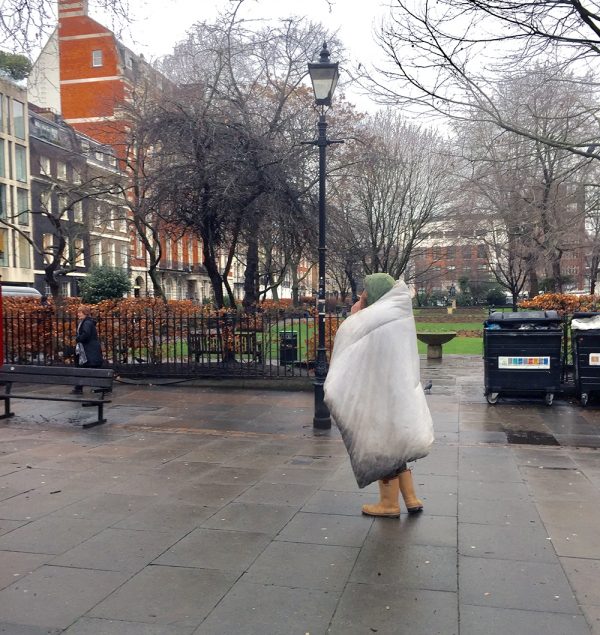 Or not… Instead become the notorious Vaporiser. 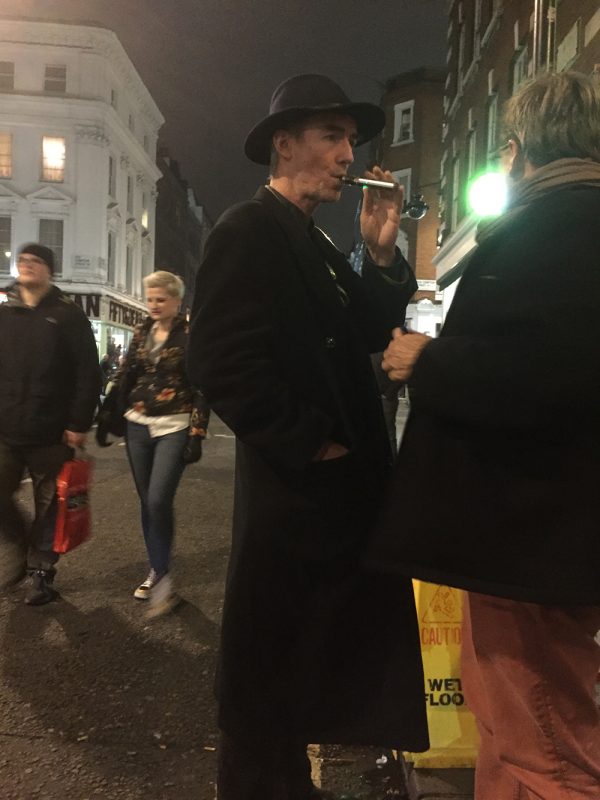 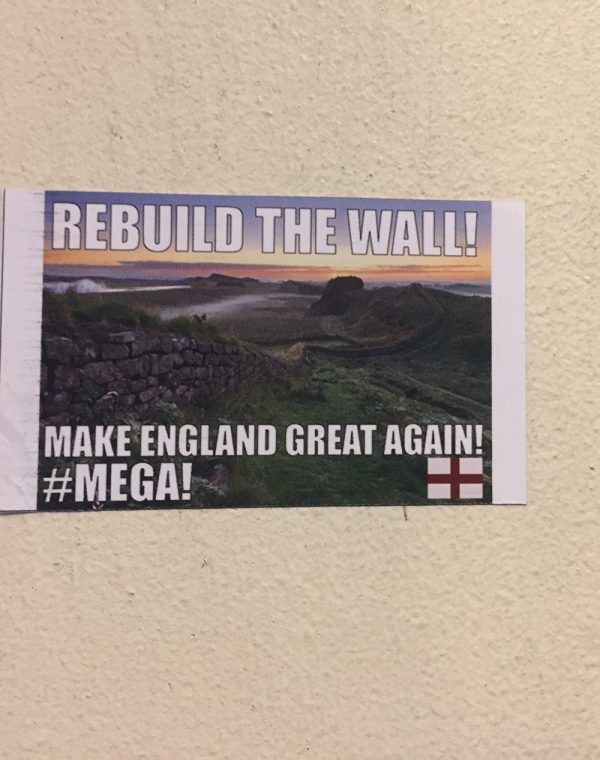 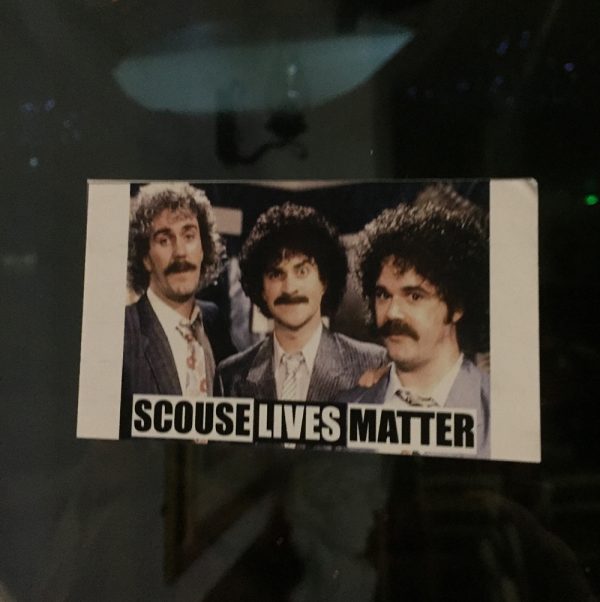 And…the pub never lies. The truth will always out from drunken mouths. 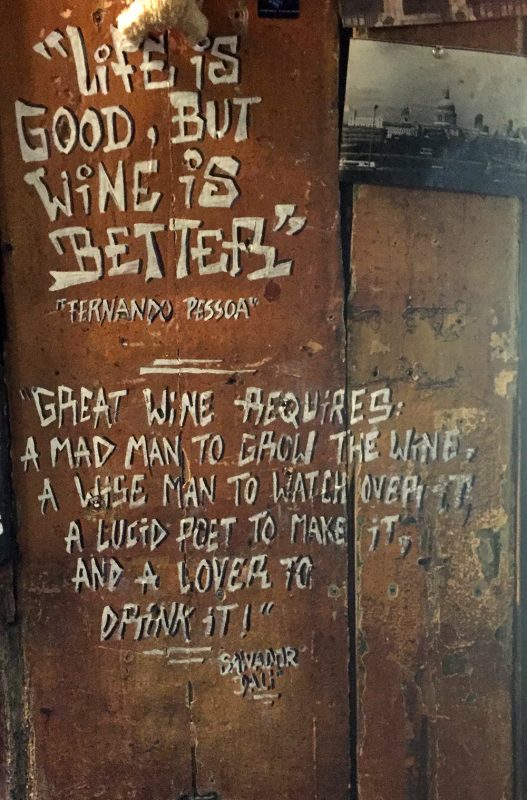 Can someone please explain this to me? 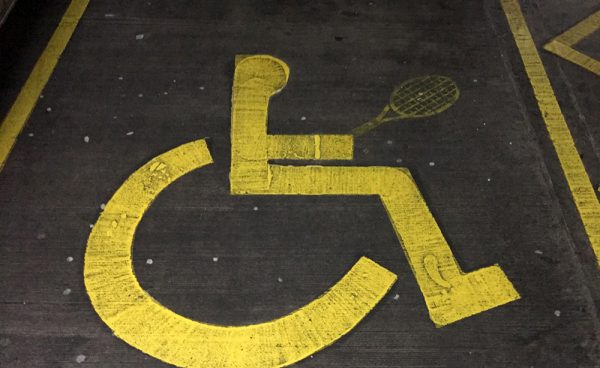 Can I only park here if I’m a disabled tennis player?

The Art Philosopher poses a question.

Despite my skill and authority as the worlds leading Art Philosopher, I found myself befuddled by the following sculptures: 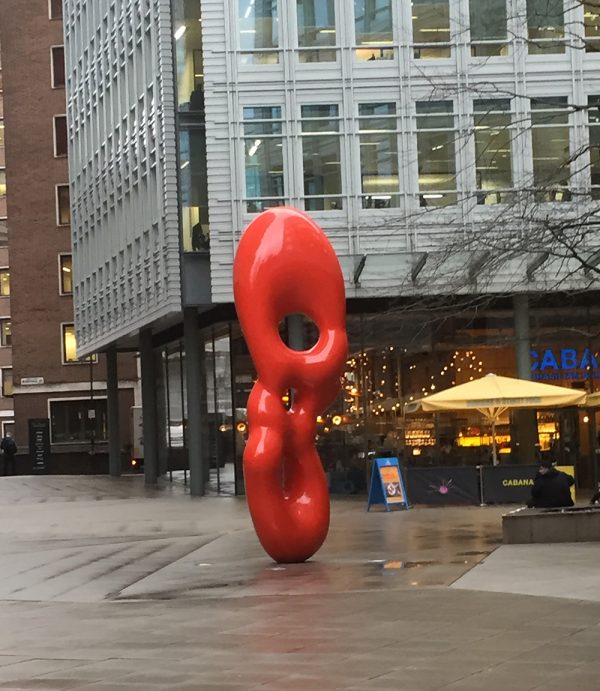 What is this thing? What is it supposed to be saying? It’s a giant orange pretzel turd and I don’t get it. Maybe it’s a misshaped fruit loop that appeals to fruit loops.

But then there’s this. Sat in the foyer of a four star hotel. I analysed it for a while, trying to find its meaning. 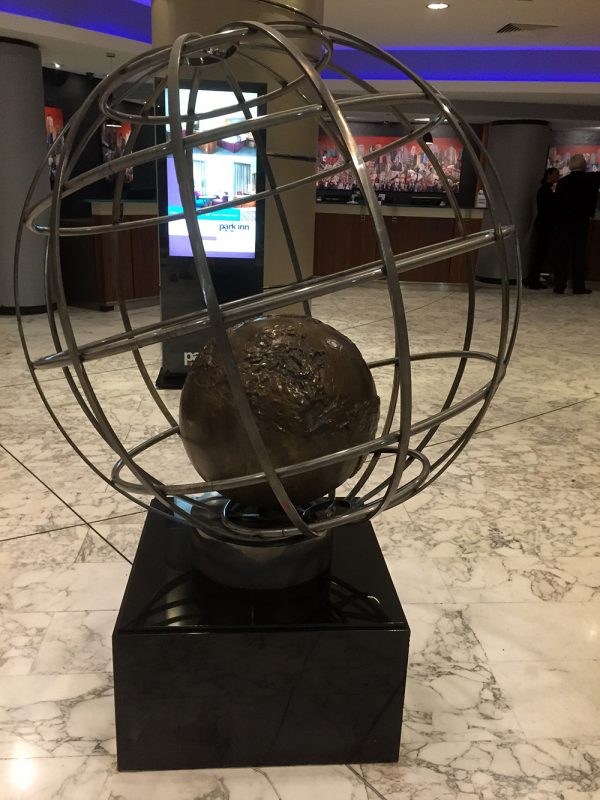 Conclusion: We are caged in a world of shit. Think on.

Between the Dom Chicks & the Pretzel Turd this was a long time in coming!
?
This brought some much needed laughs ?
-TC
x

I know, TC. I’ve been incredibly lackadaisical and I apologise. However, Dom chicks and orange pretzel turds are worth the wait…
At least you’re smiling now 🙂 x

I’m surprised that the doms, looking for slaves, don’t also sell body warmers. Of course, just because it’s not plastered up there on the phone box, we can’t assume that they don’t. Still, it might pay for them to advertise.

The British blog is good, but your art philosophy has seemed less ardent since your return from Texas. In Texas, your review of the sculpture of a steaming pile would have taken on fervor that is presently lacking. I attribute this to a lack of time on the range in Hillsboro, shooting the M-16, and the .45.

Because pathetic little slaves SHOULD wear body warmers in order that you can whip them harder for daring to don such nylon bad taste. I’d take that job. My God, they’d never dare wear one again…

Larry, I think you may be right on the fervour of my art philosophy but I’m saving my creativity for upcoming, private story writing THAT I MUST COMMIT TO AS YOU KNOW. The juices that flow from this activity will rejuvenate my arty views, I promise. Then I will happily go and shoot all the iced tea cans in Texas. 😉

You could use a nice can of tea right now because we all know that the best tea comes in a pop-top can, and is poured over ice.

Hahahaha! This sentence alone is hysterical, “The best kind of tea comes in a pop-top can” My dear lord.

Larry, even YOU, master mentalist of all time, can not ever get me to like this poor alternative to tea. No. Never. Yuck. 😉

I knew you’d like that, Hardnox. I very nearly sent it over to you but then you wouldn’t have had this surprise!

That red thing is a big juicy placenta, Jules. (I’m keeping my fingers crossed that you didn’t look at your own one, so you won’t be able to contradict me!) Cockney Al is a smart fellow – I’m going to send him a Christmas Egg!

Ewwwww…I prefer disfigured pretzel. However, since you are a wise gorilla, I’m not going to argue. Perhaps the building behind is the maternity ward…

I think you should! He’d like that a lot!

I’m pretty sure I know vaporiser guy from the ’80s… his headgear hasn’t improved. And top art, I won’t comment on the phone booths but I think it’s important to get a place in central London. I’ll have a word with the higher power.

LSP – Yes, I can imagine him cutting his groove back in the 80’s. Something tells me the hat is probably the same one.

Well, when you have a word, make it specific: Two beds, centre location, no rats, no scumbag neighbours, no rising damp and within walking distance to the French House. And NO catches. Commence… 🙂

* Anthrax Truffle=the name of my next band when i go back to college
* sticky 13s=my hands after a night at the pub
* no, Trump, no! you can have everything else but get your tiny hands off Gargoyles. that Disney show was a masterpiece.
* one time a dominatrix saved my life. she was thrusting me from the back. it wasn’t the Heimlich but it worked.
* vaping isn’t cool. it’s futuristic but it isn’t cool. Rick Deckard doesn’t vape. Picard doesn’t vape. Vicki from Small Wonder vaped that one time but it was only for the very special episode.
* the only person who doesn’t like wine was that woman who tried to drown Lucy in the grape-stomping episode.
* that’s picturing Novak Djokovic’s current existential crisis.
* that was the Froot Loop that finally forced Toucan Sam to fly south for the winter, to a cold place.
* the real world is caged inside the instagram emoji of the world. we’re all digital and doomed.

sticky 13s=or better yet my fingers after a night at the pub! those 3 extra fingers make all the difference.

Anthrax Truffle – yes! Great band name. As usual, I will play the triangle in the background sporting a nonchalant bitch face.

If you have an extra 3 fingers then I have found you your all time acting job in the follow up to the Princess Bride. Croissants will be very jealous.

Never trust a Dom who says it’s “The Heimlich” Never.

Vaping is ridiculous. Smoke or don’t.

Never trust anyone who doesn’t like wine: They’re either too young to make sense, too stupid to have taste or too boring to waste time on.

I think that orange pretzel could be a good emoji for WTF.

Be careful in that digital hell, my sweet. Things are not what they seem. *)

Sir Giles would turn in his grave, if he could see what they have done with his creation!
Welcome back.
And next time you disappear for weeks upon end, let us know.
We worry.

Yeah, right. More likely he’d be on his hands and knees taking a gob full of stiletto heel and begging for mercy. Anyone called Sir Giles Gilbert Scott has got “Beat me please” written all over him.

Masher, I’m very sorry and I will never disappear again without saying so. It’s very nice to know that my clan in the ether are looking out for me. Top stuff! 🙂

I’m guessing that wall mentioned above is Hadrian’s Wall. Originally built by Italians (or Romans, as they were called back then), or Latin folk (we call them Latinos now). We have a lot of Latinos here in the U.S. that will be looking for jobs, once Donald Trump kicks them out. Do you suppose they could put in their resume with the Rebuild Hadrian’s Wall committee? Of course, the U.K. will have to provide them with their accustomed welfare, unemployment bennies, food stamps, and other necessities that civilized countries provide its citizens.

That very wall indeed, Fredd. I don’t think the latino’s will like it here because it’s too wet but they’d probably get over that because of our “hand it all out to anyone” benefit system, free healthcare and free housing.

Grunt! Well, you may live the weirdness vicariously through me! (without being laughed at) 😉