For those of you who know of him, Frank has been back in the UK for two months and is due to go scuttling back to China very soon.  For those of you who don’t know about him you can be enlightened here and see what he makes me do here.
Frank, my Chinese student, decided it was time for me to learn how to cook Chinese food.
“Are you saying you don’t like my cooking Frank?” I asked pointedly.
“No, No. Very like.  But this I can teach very good”
My conversations with Frank have been interesting, to say the least.  Quite frankly (did you like what I did there?!) I could do with Azra or RCB staying at my house at the same time to help me cope with interpretation.  It took me nearly 2 hours the other day to work out what Frank was trying to say.  Turns out it was ”ethnomethodology”
Anyway, before RCB starves to death with his empty fridge, here’s a Chinese recipe that is very nice, very filling AND virtually fat free!
Chinese dumplings
This is what you’re going to need:
The patience of a saint
Alcohol
Spring onions
Celery
Chives
Minced beef or pork
Plain flour
Water
Salt and pepper
A rolling pin
A mixing bowl
A floured surface
A large saucepan
So the first thing you’re going to do is open a bottle of wine or beer.  This is to aid concentration. Then get a load of flour (you gotta play this one by ear – depends how many dumplings you want) put it in a bowl and add tiny amounts of water until you have a dough. Here I was, expecting to have to make some sort of posh dough mixture, but nope.  This is as easy as pastry gets.  However, you now have to knead it and knead it until you feel like your wrists are going to snap.
Now put that to one side for a minute and let me tell you this:  Frank decided that he would skype in his wife and children to watch me make said dumplings.  NO PRESSURE THEN!  I felt like I was taking part in a practical examination as I held up my little dumplings for inspection to Franks laptop.
As the pastry settles, grab your celery,spring onions and chives and chop them into the tiniest pieces like this: 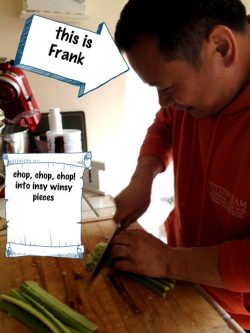 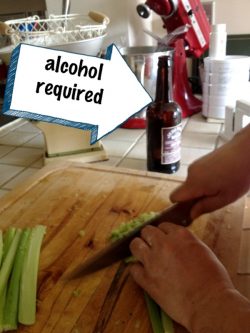 Steady on the alcohol at this point or you are liable to lose digits
Now mix together the chopped veg and minced meat in a big bowl.  If you use a spoon or fork then you aren’t a Chinese specialist like I am. 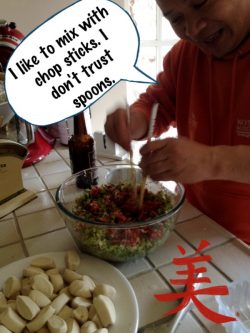 Now back to the pastry.  Grab a chunk and roll it into a six inch sausage shape.  If you are male, please get a ruler or ask a woman as I tend to find that men are somewhat deluded by the actual size of a six inch sausage.

That’s really six inches?!
Keep doing this until all your pasty is in cylindrical shapes and then chop them into 1 inch pieces as seen here: 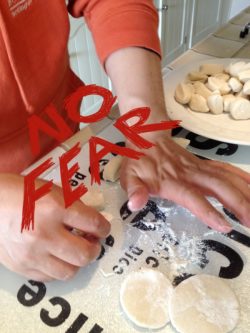 Now flatten each one with palm of hand and then use the rolling pin to get the little buggers circles flatter and thinner. 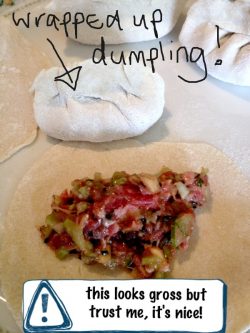 Fill each little circle with just under a teaspoon of the beef and vegetable mixture.
Now it gets a little tricky.  Pull in the ends and bring the sides together, pinching and folding as you go. Basically, make sure there’s no gaps and it’s stuck together well.  I started to look at it like art after a while and began to get creative by putting little fork marks in.  That blew the judges  away on the skype channel and I felt a sense of one upmanship.  That was until I got to my 75th dumpling and lost the will to live.
Once you have completed this lengthy ordeal it’s time to cook them. Hoorah! Get a big pan of water and keep at a gentle simmer (add a little salt) then drop the dumplings in gently. 10 minutes later they are ready.  I wasn’t buying this at first as it didn’t seem long enough.
“No, Frank.  Impossible.  The meat will be raw” I insisted.
“Yes, eat! Is ready . Fine! Just put in mouth and taste!”  he implored.
I didn’t.  Instead I cut it in half with a chop stick,which is incredibly difficult, to check.  It was perfect. 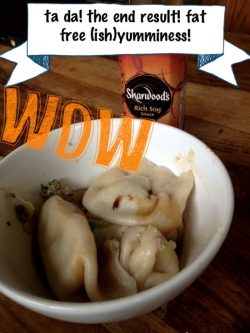 Put 5 or 6 in a bowl and add soy sauce.  Go ahead and eat. It’s a taste sensation and your skinny jeans still fit afterwards. Nice.

Haha your commentary cracked me up! And the recipe sounds good! I’m not much of a cook and the whole pastry thing scares me a little bit – but this recipe might be worth a try!

Thank you Laura! The pastry is easy, just time consuming. It’s worth a try they are good.

That was awesome. I was on diet, I dont think I am anymore. I dont understand that skype thing.
His wife already knows how to make dumplings,
You are just learning, and the teacher is Frank. Why should his wife watch you? If she watched Frank teaching you, it would make sense. 🙁

I hope RCB doesnt see this post, poor guy, his fridge cant be empty anymore after seeing this delicious dumplings.

You can have this on a diet! Hardly any fat and very filling. It’s the dumpling diet. He’d better make them now, I want to see that fridge full of dumplings!

@ meandmythinkingcap Too late… I’ve seen it!

And he’s making them….

I grew up on these dumplings! But never once attempted to make em buggers. Your should write cook books. I would buy just to read and laugh. Thanks for the laugh!
🙂

He he! Time consuming little buggers! Yeah, I reckon Frank and I could have fun writing cookery books though I might upset a few Chinese chefs!

Damn that’s a lot of effort – I hope he knows a few wok recipes as well! Interesting that the dumplings are boiled in water rather than deep fried like samosas. Anyway, I hope all this kneading will make your grip strong enough to open jam jars.

I have a vice like grip now GB. It would make your eyes water! Yes a wok recipe would have been easier.

They look really nice.
However, I am Mister Can’t Cook, Won’t Cook.
Do you know where can I get a Frank?

They are nice Masher and you CAN do it! Or I could loan Frank out I suppose…

I would love to be there, deciphering lingo and all that 😀 That looks quite delicious. I like dumplings and will definitely try this recipe.

Azra AND Juliette? Really, that’s all the company a grumpster like myself needs to be temporarily degrumped – even if it means more interpretation challenges after working hours and more mobile dictionaries to suffer. Hope your fridge is empty, too, or I will be forced to hold you and your little Chinese dumpling accountable for the extra pounds I will have gained. Great recipe: it requires alcohol. I suddenly realize there’s still some hope for me, the Blue chef.

UGH! Don’t talk to me about mobile dictionaries! You can cook this Blue Chef, it’s just a bit fiddly but relatively easy:)

Next time Azra you can bring your deciphering skills and I’ll cook you up some little buggers!

It is. Drool worthy too!

Wow! I had no idea that dumpling dough was so easy – I’ve always wondered how to do them gluten free as well…

These look yum though.

I know! I thought it would be way more complicated than that!

I traveled to china with my family around 2-3 years ago, the first words I picked up (not sure about the spelling)
– E nero jouza
(1 beef dumping)