“Come to The Village,” they said.

Ah- ha… heard that one before. Ends in tears and headaches. “No. Too busy. Still got jet lag and the onset of some hideous disease that I caught from the great unwashed in Asda.”

But you’ll like this, it’s the Santa Claus Biker Run!

“Followed by a Victorian Fayre in a stately home.”

Triumph At The Village

I got up early and set off along the beautiful country roads to The Village: blue skies, sun shining on golden autumnal leaves offering quintessential English scenery that makes you want to be nice to everyone.

Until you get a couple of ‘osses in your way. 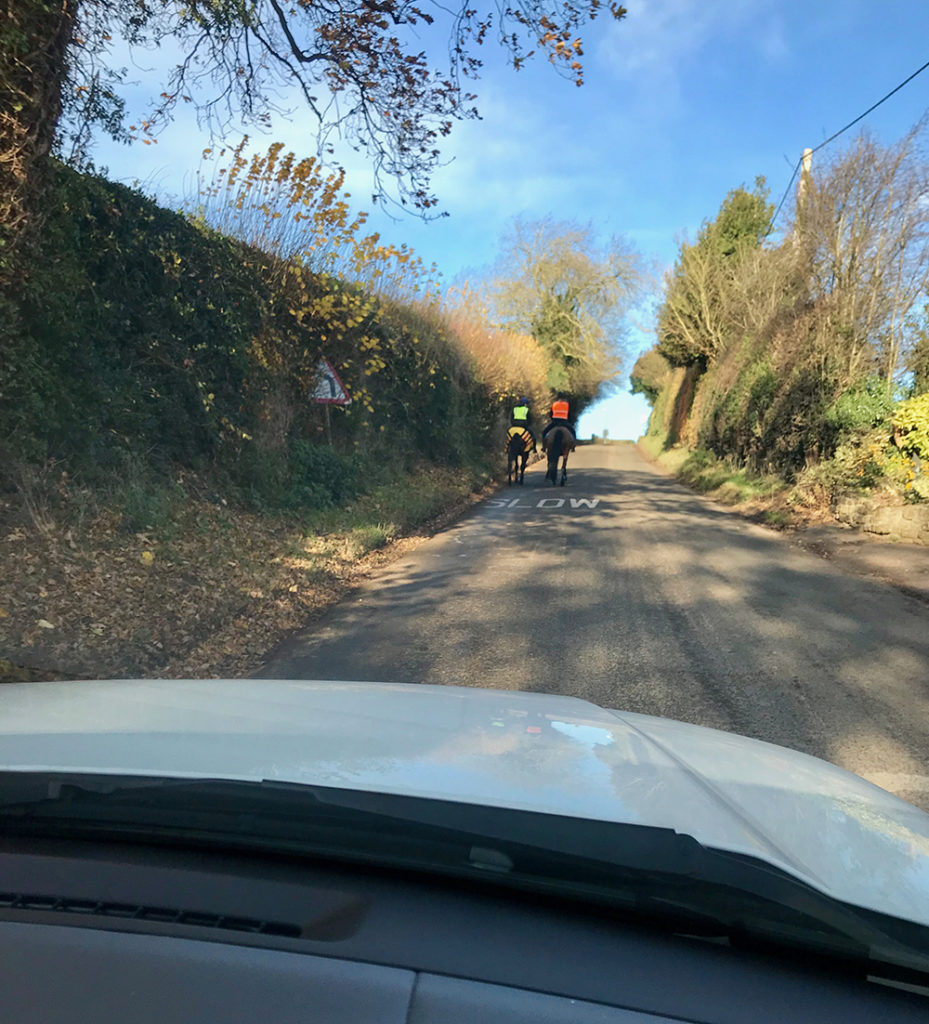 I arrived to the streets and pub car park littered with motorbikes and leather-clad bikers.

I don’t know what it is about helmeted, leather-clad men straddled across purring, beastly machines that they can take to the limit, but it’s tantalising. You could be the ugliest male on the planet and it wouldn’t matter because right at that moment you are an Adonis. If I had my time again I would become a professional biker bitch.

What’s doubly attractive is that these bikers roll up every year to take presents they’ve bought to sick children in hospitals for Christmas.

How flippin’ nice is that?

They roll up, some dressed up in costume others just, ya know, leathery, down a cuppa and a bacon or sausage cob from Hank Marvin’s (Cockney rhyme for starvin’) food van and at eleven am they all take off to the hospitals throwing waves, kisses, winks and sweets to those watching on the pavement.

After I’d filmed all that going on I helped finish up the leftover sausages and went off to a nearby stately home for a Victorian Christmas Fayre.

I found Sherlock at the bar ordering a malt whisky. 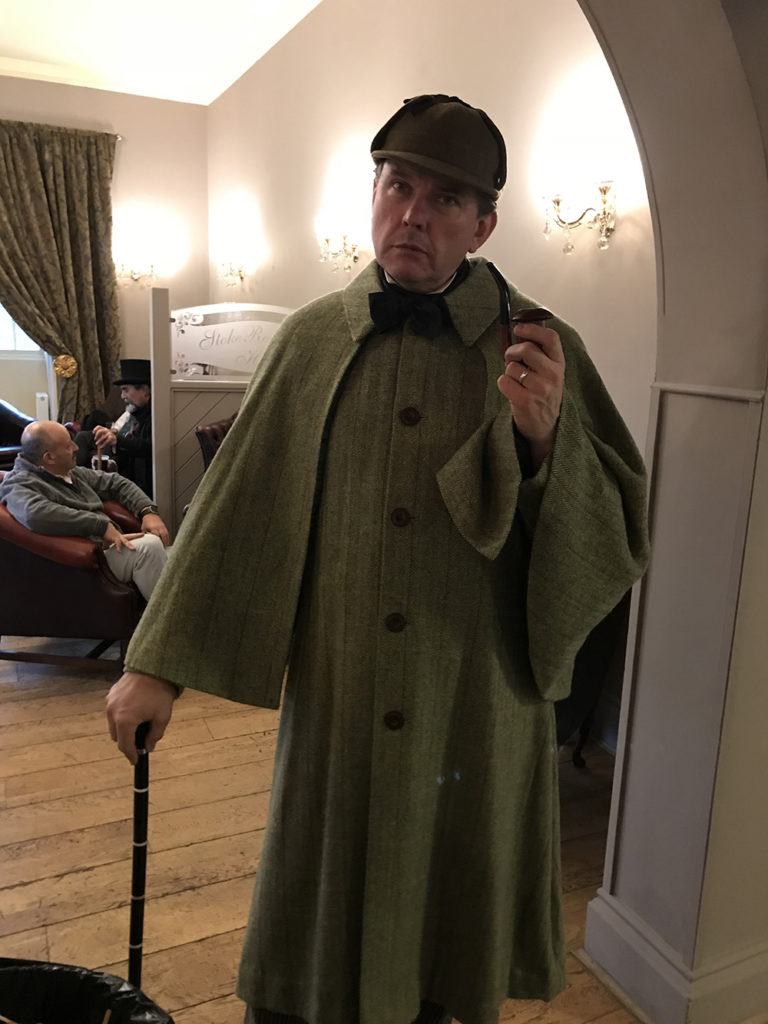 I listened to Dickens read a Christmas Carol whilst I ate a mince pie sitting on a Chesterfield sofa in the drawing room. Like one does. 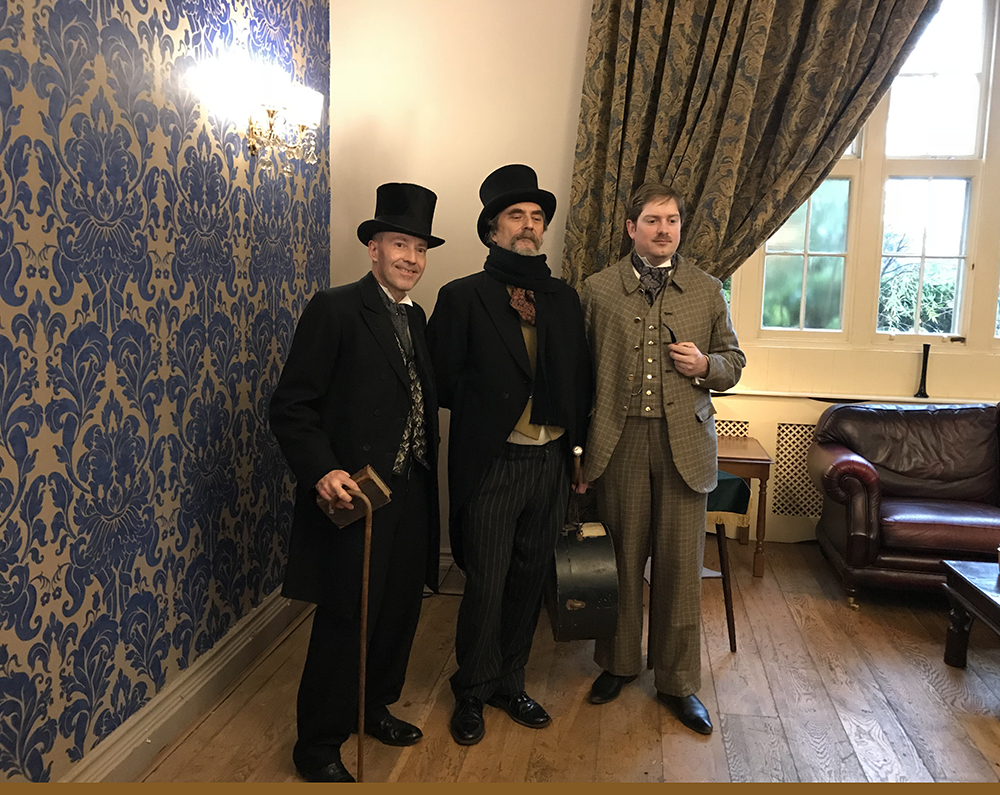 And Not Forgetting The Bike Theme…

And then….then I found a mister with a bike! Oh yes.

This guy has ridden this bike all over the shop for miles. The English tend to do nutty things like this for some reason. Like swimming the Channel in winter in pyjamas or sitting in a bath of cold baked beans for 24 hours or foxtrotting in the car park. You kind of get used to the madness like its normal behaviour. 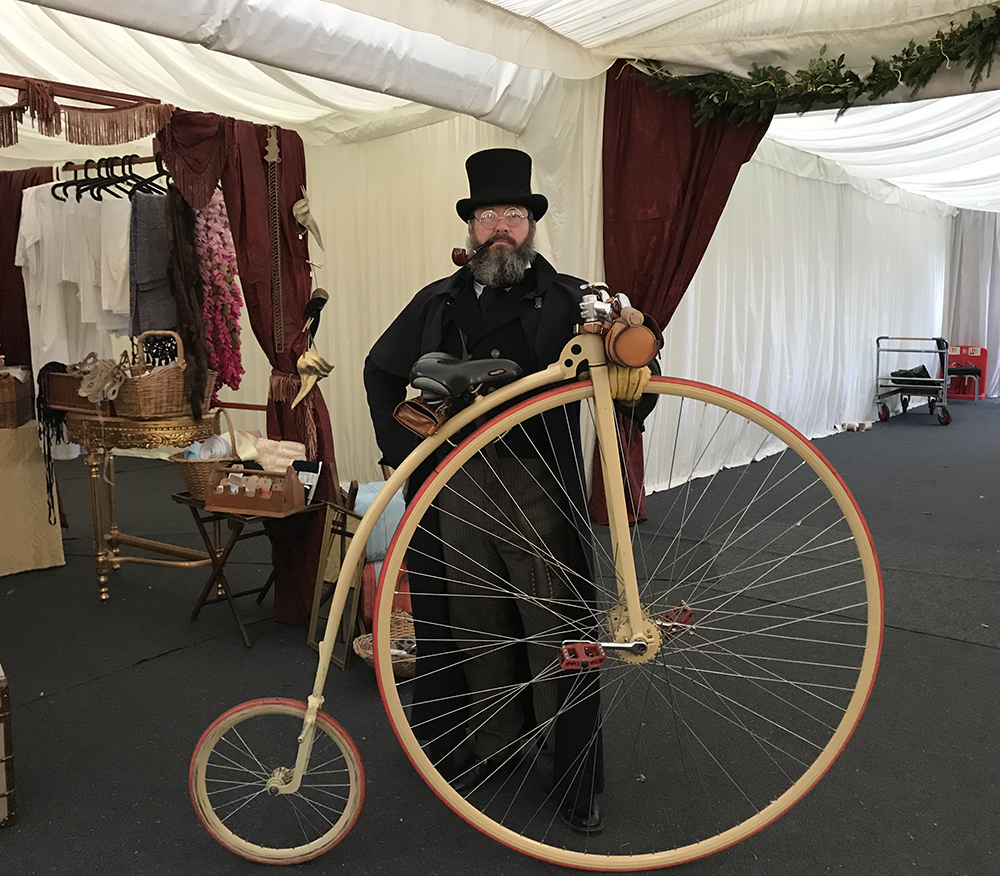 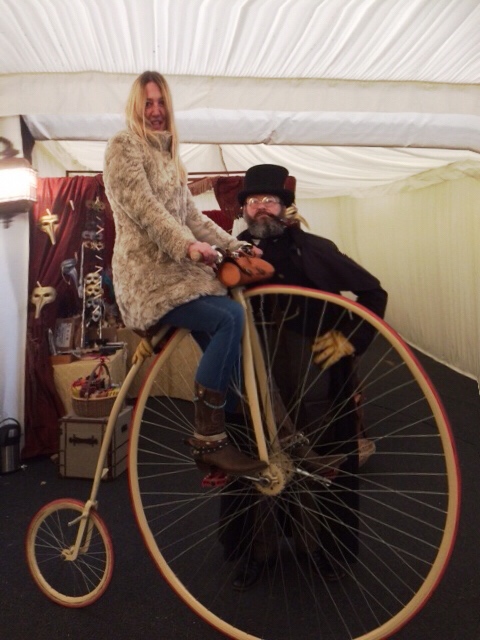 I have to say it’s easier to get on a horse than this contraption and you’re probably less likely to come a cropper.

I left as the sun set in the hills behind Belvoir Castle. On the whole, what a rather fabulous day! 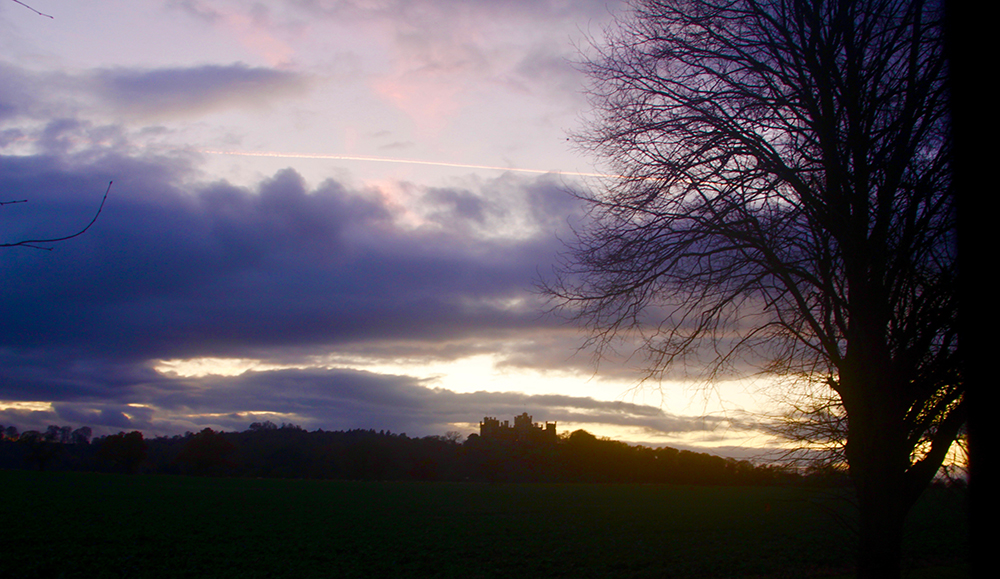 The Santa Claus Biker Run, Bottesford, November 2017. Video below. Please watch these guys and give them a like as they deserve some recognition for what they do every year.

What wonderful whimsy to wake up to on a Wednesday when you’re feeling under the weather.
Typical English eccentricity. Love it. And hats off to you for attempting to mount the Penny Farthing. Well done Jules. I shall now attempt to get out of my warm bed this wonderful morning and try and find some of the christmas spirit that abounds our county.

Well, I’m happy to bring you an elegant sufficiency of eccentricity!

Do you still feel ill? I’m trembling with crawling fever. Even had to put my wildcat onesie on, I’m that bloody cold.

Get better soon – we need our Christmas in a glass. 🙂

Nice! This put a smile on my face. That Penny Farthing bike must be a challenge to get on. The Santa Claus Biker Run was nice. Bikers do this here in the States for every imaginable cause. Good people with big hearts.

Look at me bringing joy to my readers! That makes me very happy!

Getting onto that bike is insane. You have to do it whilst it’s moving from the back. Trust me, Nox, horses are a breeze by comparison.

A gaggle of helmeted, leather-clad man on machines used to push me around quite a lot in middle school. I was not tantalized.

Well, it doesn’t count, M, because you spelt tantalised wrong 😉

If I could go back in time I would go to your middle school on my Penny Farthing and give ’em hell. They wouldn’t bother you again, trust me. To be honest, most people are arseholes in middle school. Except me – I’ve always been angelic. 🙂

I love it! My hubby and I have aspirations of doing a cross-country biking trip after we retire. I saw a video about 3 men who would go on “service” biking trips every year. They went specifically looking for people who needed a little help, and giving the assistance they could–financial, physical, etc. While working in Yellowstone, I saw my share of biker groups, and they were all pretty awesome. But, I was totally taken at the time, just waiting for my man to get home from a service mission. He would be totally hot on a bike in leather. =)

What a lovely idea – on a Penny Farthing or a bad-ass motorbike? I think that’s a fabulous idea no matter what kind of bike you use though I think a trike and a sidecar might be fitting! In leather, obvs. 🙂

When you mentioned “biking” I thought you meant bikes not noisy motorcyles. But I guess the oil drillers have to eat too.
Now I just have to research on how that real bike got its name. Don’t eat too much sugah now.

Well, at least I was on a proper bike, Goatman!

It’s named after the two coins at the time ( and relevance to the wheels) but you probably know that by now!

I won’t. I don’t even really like mince pies but you just tend to put them I. Your mouth at Christmas without thinking. 🙂

Time for you to change them cowboy boots for some biker ones, I reckon!
If you ever fancy swapping one horse power for 62… 🙂

(You’d have to wait till it’s warmer. MUCH warmer.)

I LOVE going fast! Masher, I will only take off my cowboy boots if I can wear these:

The second ones *ahem* work for me.

Brigitte Bardot asks, “how’s the weather up there?”

I have a thing with penny farthings. recently. they ride into my dreams. I wrote a story about them. I still think they cost one farthing. they were the original monster truck. the ancient Greeks used them for early meteorology till the Romans came along in their motorcycle gang. can I be the E.T. to your Elliott? E.T. was my nickname in college. hurtful nickname, made my stomach glow red.

The weather up there is very odd. It’s so high up you’re actually in a parallel universe. This is very complicated when both of you want to do something different.

E.T. still makes me cry. I have more empathy for puppets than I do anything.

Daisy, you need to tell that chap, “on yer bike!” Planted one day by a glancing dart…..? I’m not sure how I feel about that line. *)

You make me laugh, Jules. You have such a unique spirit and propensity for odd adventures. I don’t know why you haven’t been picked up by a TV station!

Thank you, Jane – you put that in such a polite and lovely way which is not how I’m used to hearing ‘yours truly’ descriptives!
If I got on TV I’d get far too big for my boots and we can’t have that because my bewwwwts define me! 😜