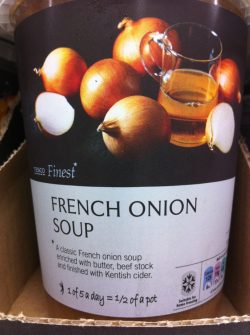 Oh evil child you deserved the hangover, anyway onion soup is the french version of horlicks!!!!!!

It’s often the crazy, scary incidents in our lives that prove to be the most unforgettable – particularly with the added ingredients of liquor and laughter!

Thanks for the hangover cure…

That is a great story! I don’t blame you for being mad at your mom!

So Claude invited you to a disco so you could dance with his shortarse friend? Never trust a dwarf pimp. Tim should have picked up the bowl and gulped it down quickly – the taste doesn’t matter when it’s inside your stomach.

You are as far beyond hilarious as your mum is from my sane one! You’ve got a real comic touch, Jules!

P.S. I’m half-tempted to change YourAllure to Suited and Booted!

Lynne – PFFT! I am positively saintly going through that ordeal!

Beth – It does actually work. Either that or I had just drank myself sober.

Cherries- It’s one of many Cherise!

Belle – Thank you for your support Belle, please will you adopt me?

Mr Gorilla Bananas – Yes, had I known he was a pimp dwarf I would have got my wits about me but I was to focussed on the ‘Psycho’ thing! And as for Tim, well, these runners have very delicate stomachs allegedly.

Tim – You’ll never forget it will you!

Clark – Thanks Clark – I think ‘suited and booted’ would be a fab name!

Lol. You’re great at story-telling. So how long did it take for Claude to prepare the onion soup ? Poor poor Tim!

Jaya- thank you! Well, it took him an hour! Crazy.

Ah, Jules, I miss Europe. I always enjoy your take on life and how you view the rest of the world. And I always wanted to visit Brittany and Norway but never did. Thanks to you, I’m NEVER going anywhere near that WACKO! :-))

Thank you Dean! Normandy is very beautiful and as long as you don’t start making friends with the locals you should be free of the dangers of ‘onion soup and psychos!’ Please don’t let my experience put you off!

Norway? That onion soup must have gotten to me! 🙂

Hahahaha… your mother sounds like mine. Only mine is crazier, I’m sure of it.

The Pasadoble? While you were half-drunk? Seriously? LOL! I would have loved to be a fly on that wall. I can’t even begin to imagine.

Glad to see that you lived to tell the tale 🙂