T is for Trigger Happy 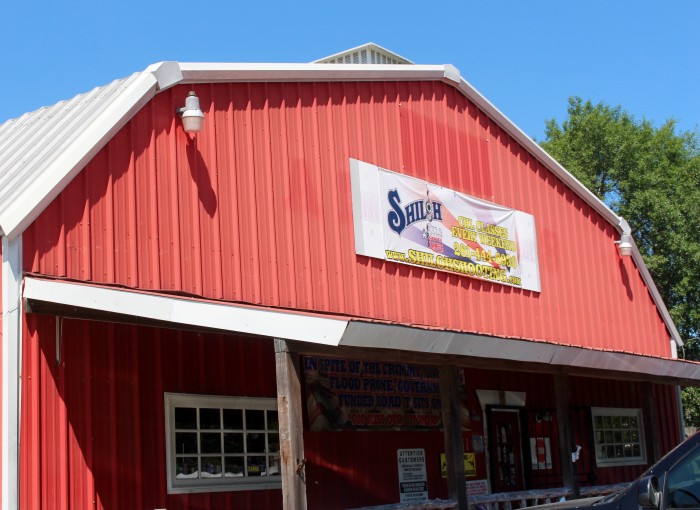 Today I went to shooting class. I’ve been so excited about doing this since I arrived here in gun land.

Off I went to the Shiloh Shooting Range. 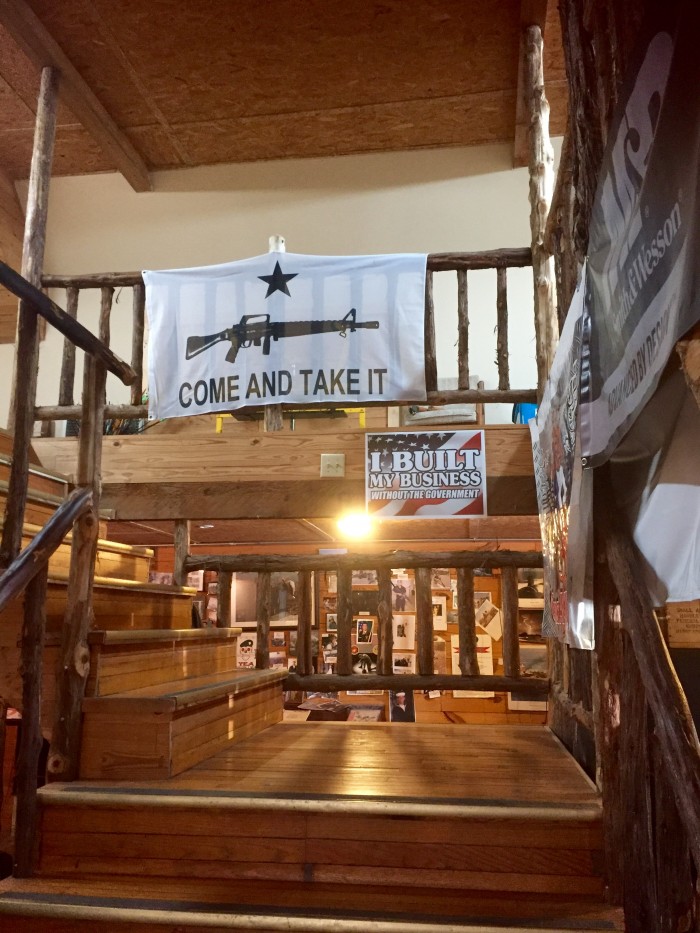 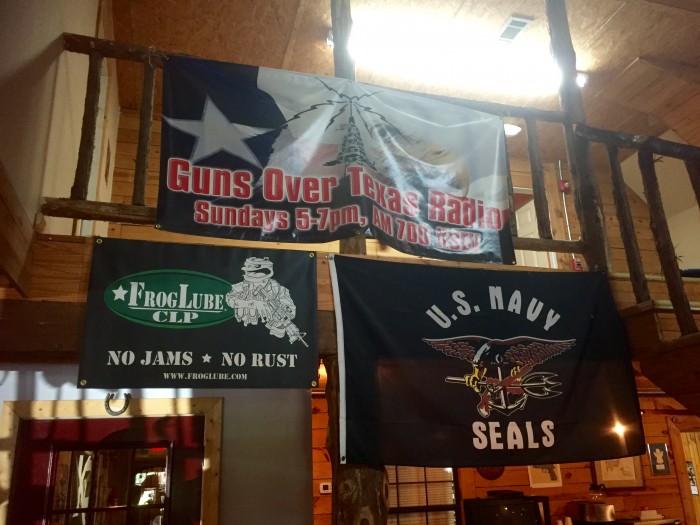 Even outside in the car park I could hear the sound of gunfire quite loudly which made me a bit edgy. But then this sign made me laugh! 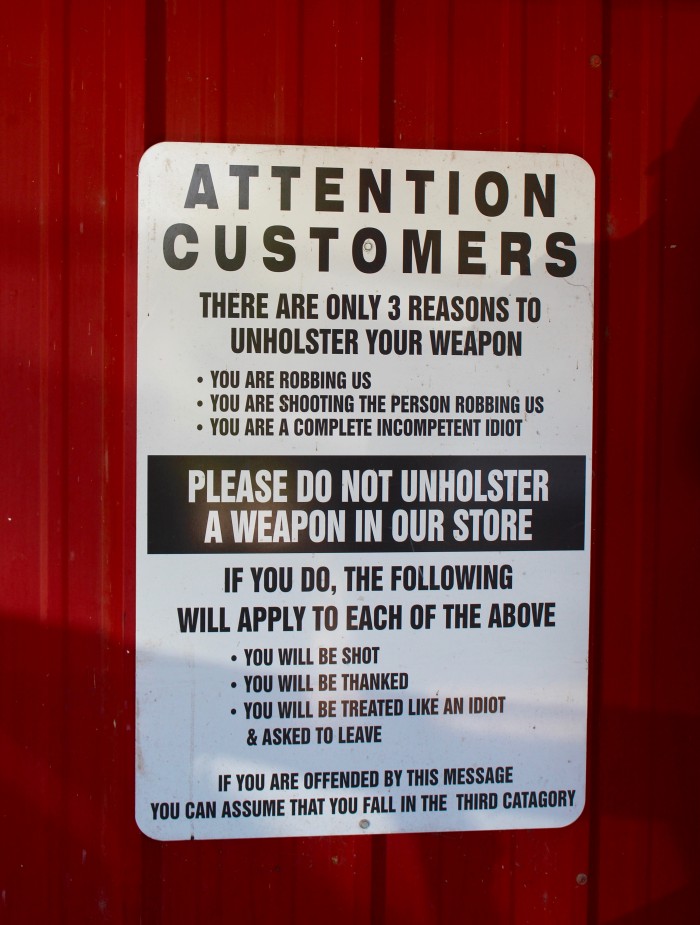 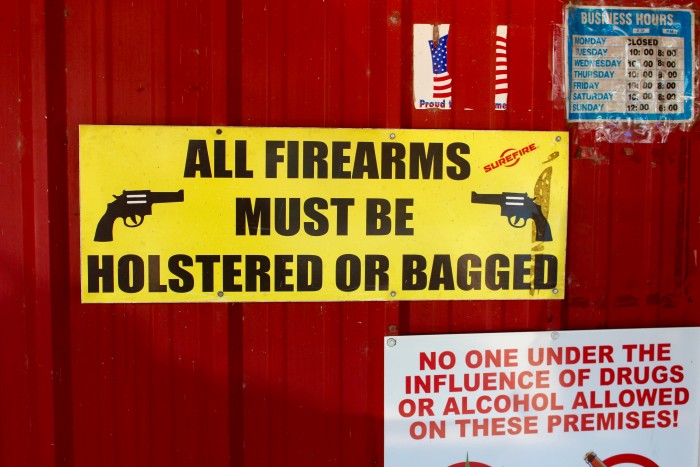 Jeff was my teacher and he was awesome sauce. 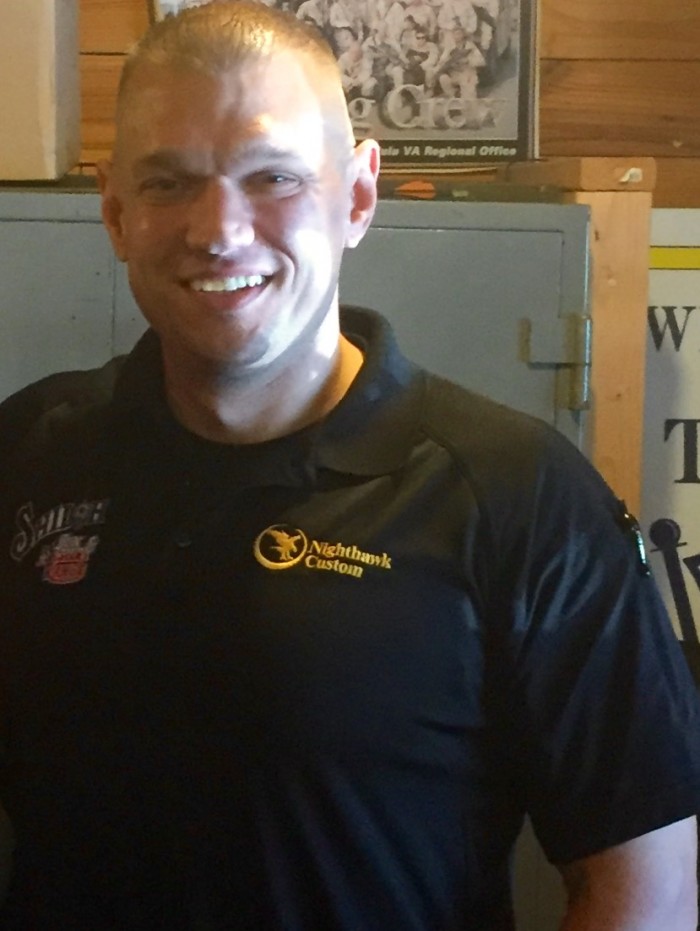 I never knew there were so many rules to shooting a gun. First the paperwork and you had to spot the trick question. DUH. 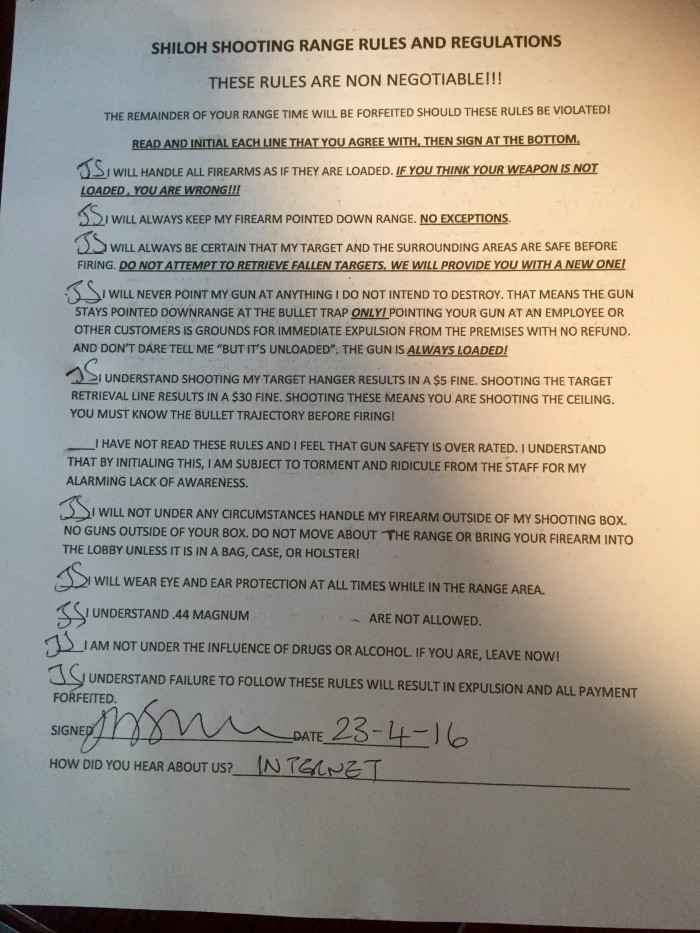 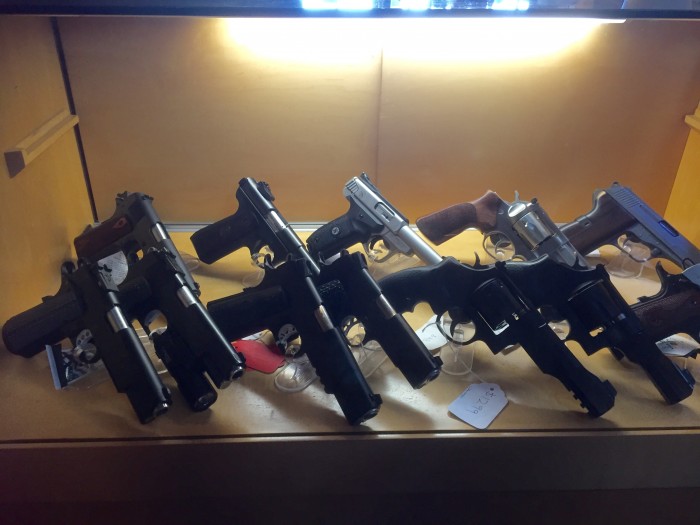 The 4 most important rules are:

1:  The gun is always loaded – even when it’s empty.
2: Only point down range
3:  Know your target and what’s around it
4:  Keep your flippin’ finger off the flippin’ trigger!

I learnt how to load a magazine except Jeff said that over here men are chivalrous and so whilst he showed me, he did it for me. Men always fill a lady’s magazine with bullets…. You don’t say… 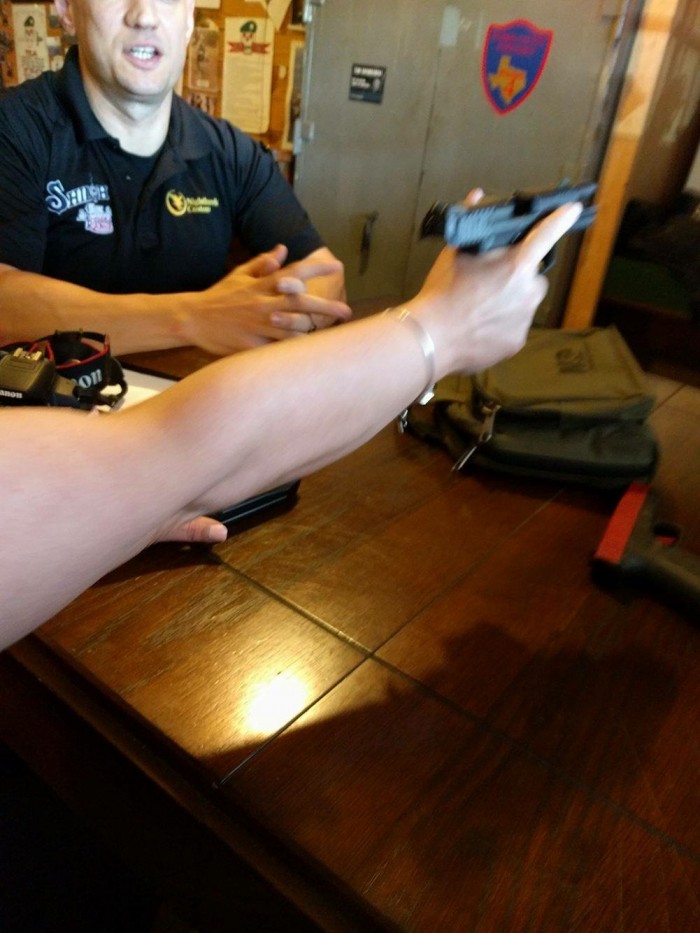 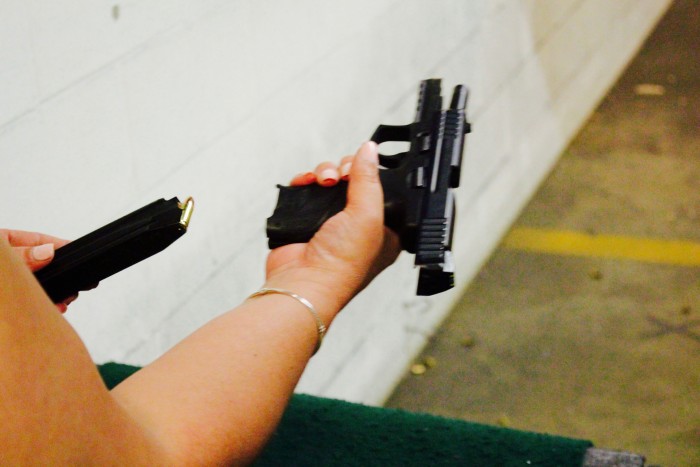 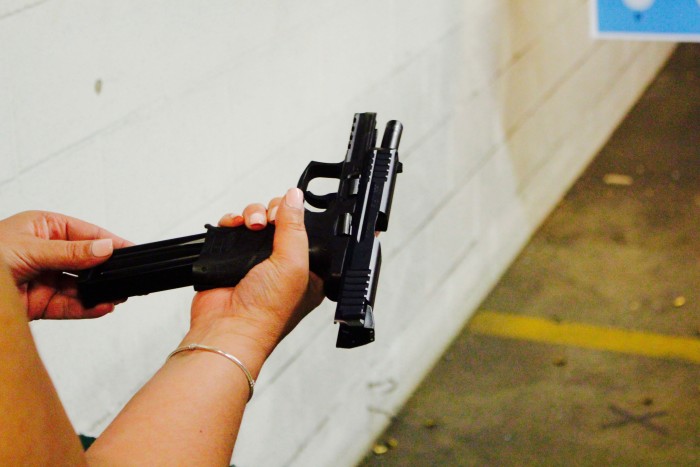 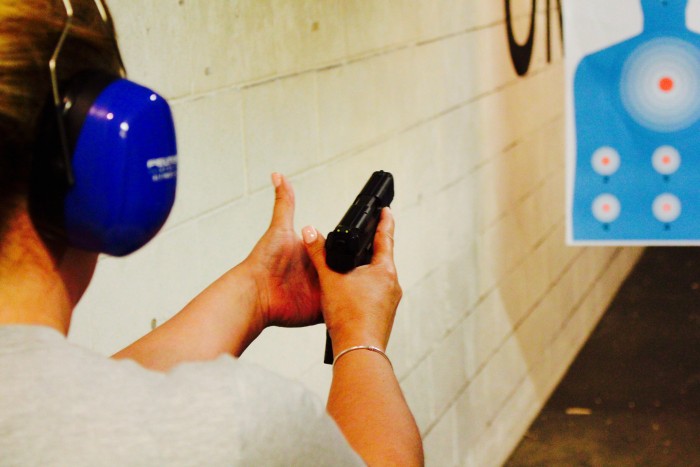 Then I learnt how to load and unload it. How to pick it up WITHOUT ever putting your finger on the trigger and keeping it above parallel on the side of the weapon. Then there’s holding it which was harder for me cos my hands are smaller. How to hold my hands, my feet, my arms and then squeeze the trigger slowly. Talk about complicated.
Anyway, after class off we went to the shooting alley bit. HOW LOUD? And that was with ear plugs and ear muffs. Nearly jumped out of my skin. Especially when someone stared letting rip with a rifle next to me. Jeff moved me to another alley noting that I was a bit scatty. Jeff said that girls ears are way more sensistive. I couldn’t hear what else he said.

The gun I practised with was called a HK VP9 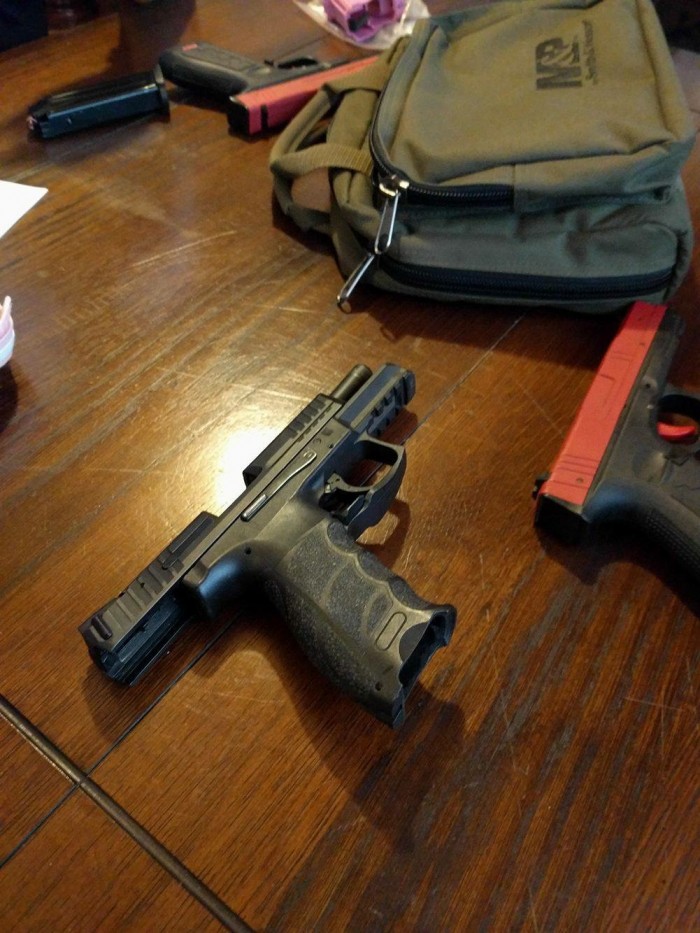 “You’ve come all the way from England to shoot a European weapon!” Jeff said.

“Jeff, it matters not. It’s the first gun I’ve ever picked up that doesn’t shoot water or potato.”

The first time I shot the target paper man I couldn’t believe how powerful the gun was. Worse, the burning hot shell that jumped down my cleavage thereafter. 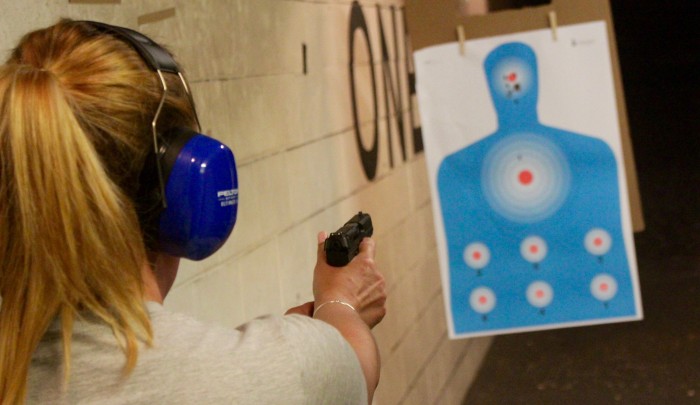 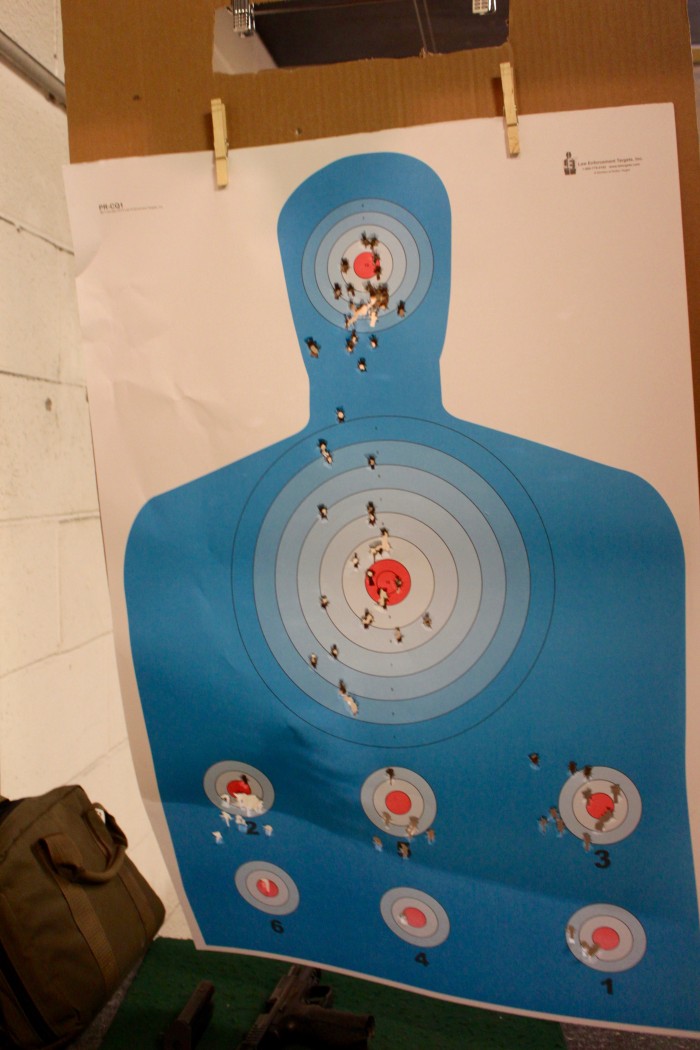 “I’ll get you a shirt to stop that happening,” said Jeff. He let me keep it for free for being a good student. Yay! 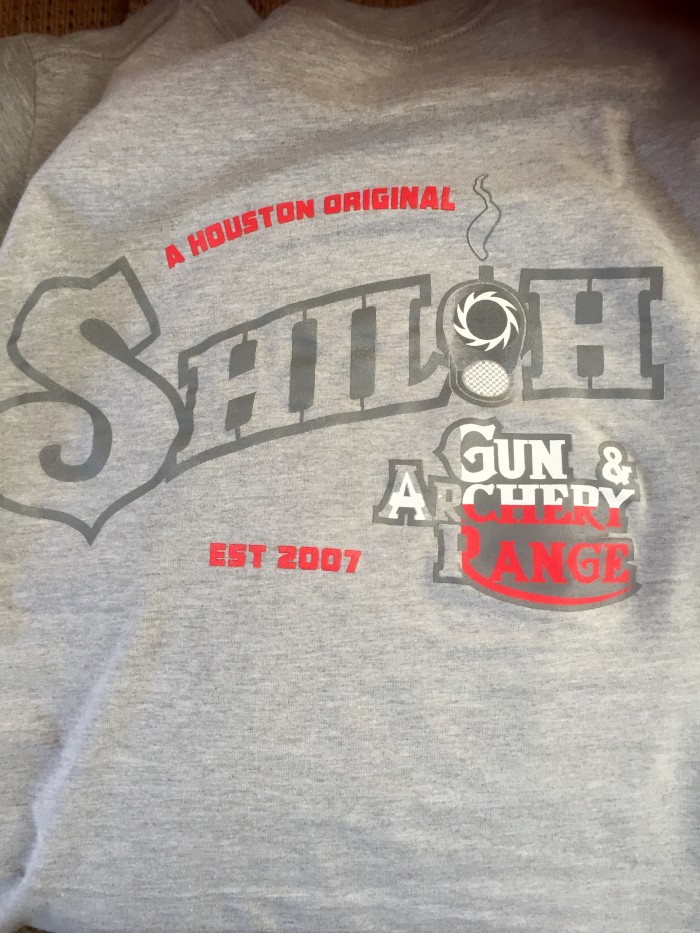 Jeff and the people at this shooting range were proper, proper nice: patient, funny and brilliant teachers and I had so much fun. Next time he says I’m learning how to shoot a rifle. Cool!
Video evidence below: Jules learns to shoot.

Outstanding!
Quite the Gunslinger!

Oh thank you, Anthony! The first shot frightened me a bit and I need a lot more practise yet but I really enjoyed myself! I reckon I can be a real life cowgirl! 🙂

Absolutely!
Next we’ll have to teach how to detail strip and clean a weapon.

Pfft. I just want to shoot it. Don’t guys do that for you like the magazine loading malarkey?! 😛

Of course!
(yeah, right!)
Ya’ loads your own ammo & ya’ cleans your own weapon!
Can’t you just imagine?
“Honey…There’s someone breaking in. Fetch my pistol and a box of shells. While you’re at it, would you kindly load it for me as well?!”

BTW… Now that you’re getting around town in that Big Red SUV… I can share with you that you were actually less than one mile from the C&W Whiskey River Dance Hall today, when you were at the shooting range! Can you say, coming up next my “Mechanical Bull Ride”… !

Oh my God! How long do you reckon I can stay on for? 🙂

If you’re going to be a Texas Cowgirl, that was a critical step in your education.

It was. Baby steps!

I know. I didn’t want to be noticed. Stealth.

Welcome to America. And that’s all I’m going to say about that.

Are you ever going home? It seems like you’ve been there forever.

What? I’ve only been here a month. I’m officially allowed another two and plan to take the! 🙂

Jules – Did you know that the HKVP9 grip can be customized to fit any user by utilising a set of three interchangeable back plates and six grip panels to produce nearly 30 different pistol grip configurations ??

Unlike your large wine glass which has only one grip !!

Well of course I knew that….not. So I could have had it to fit me perfectly? Clearly I need to go to the RAF rather than a Texan shooting range. Up my gas a bit. Yes…I find most wine stems are very ergonomic to my clutch, David! 🙂

I watched the range video, good stance, correct breathing and handling but I did warn you about the recoil ! Thought you were going to give paper target man a double tap in the b*ll*cks after the first shot.
A quiet afternoon in The Bell will never be the same again as you perform stunning shooting tricks on the wine glasses behind the bar.
RAF range ? I think you are better going commando 🙂

I know, the first shot went a bit awry because I wasn’t holding on firmly enough with my left hand. However, I don’t see a problem with a shot to the bollocks – That’d floor the best of ’em!