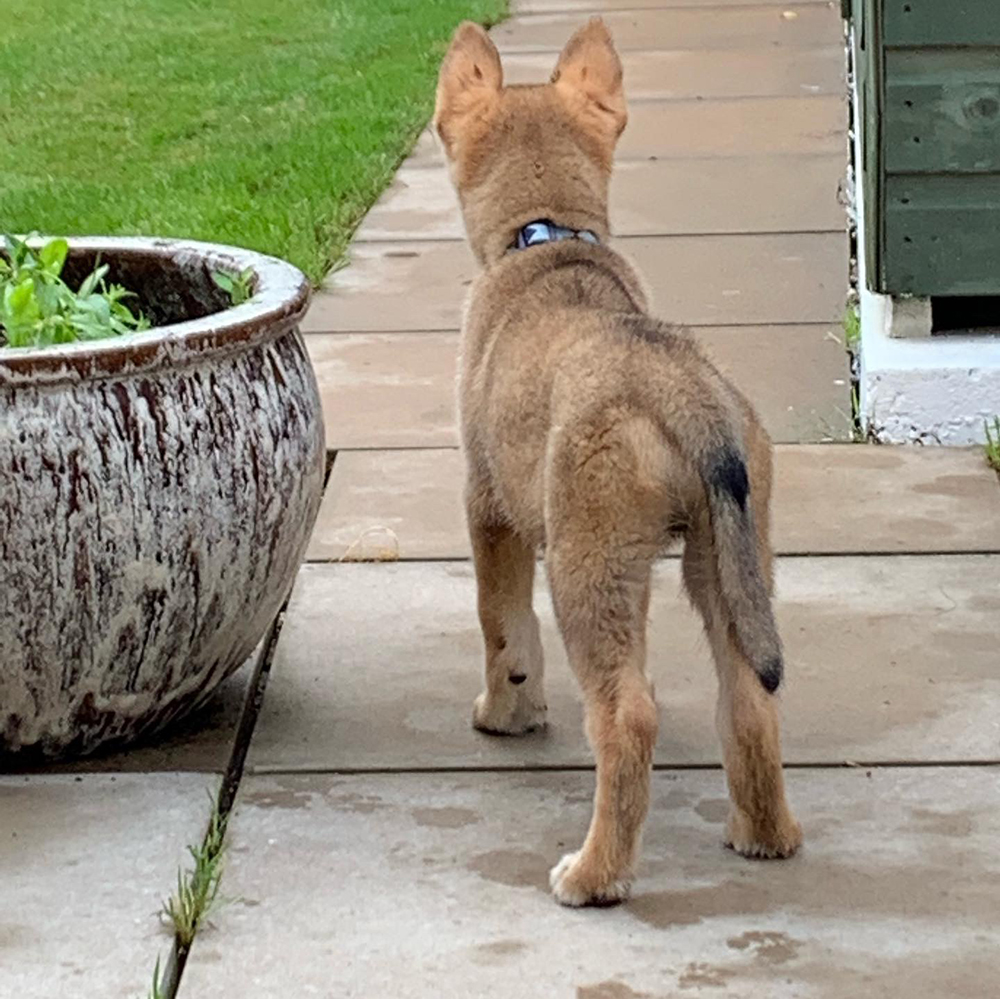 Satirical Snapshots Bringing You Wolfie Whimsy On A Wednesday!

I’ve been on a waiting list for many months.

Patiently (or not so) waiting for the ultimate weapon in my newly formed army.  The sniper! I told Kevin all about it.  He flicked his tail violently and scurried to his cave. Dragons are very competitive.

On the 4th June, ten little wolfalikes were born and one of them was mine.  After stalking the breeder from Shima Onida Wolfdogs for 8 weeks ( nearly camping outside her house and knocking on her door at every given opportunity) I was finally able to take my puppy home. 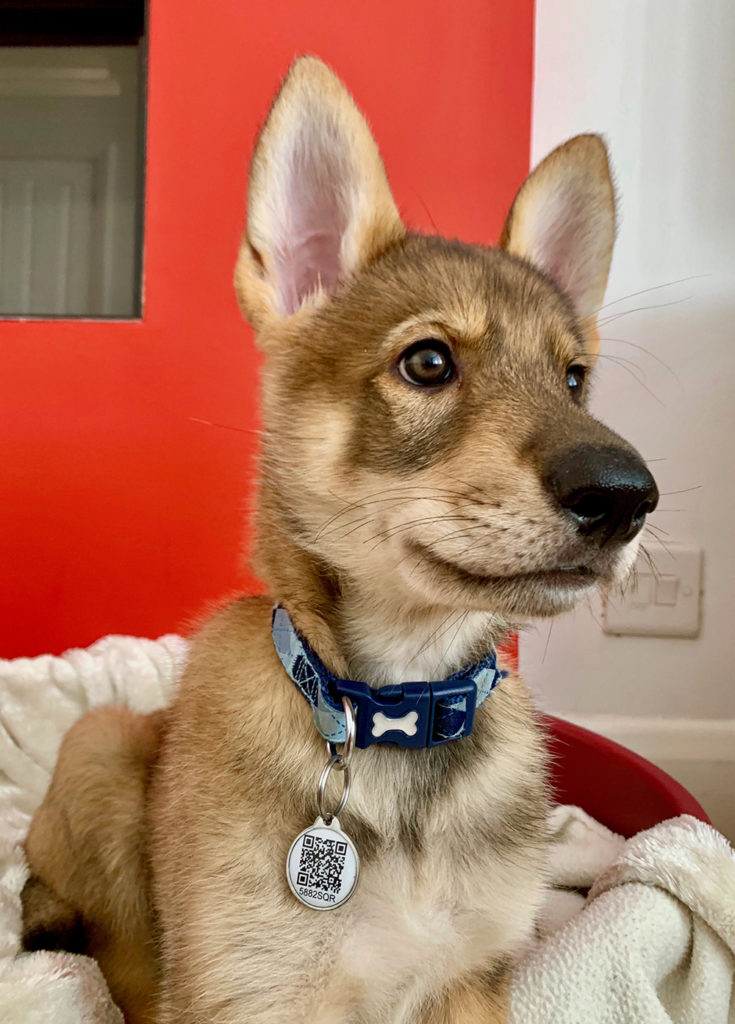 A first generation Timber puppy from The ‘Angel and Demons’ litter.

Because if anyone was going to get a hellhound, then it’s me. 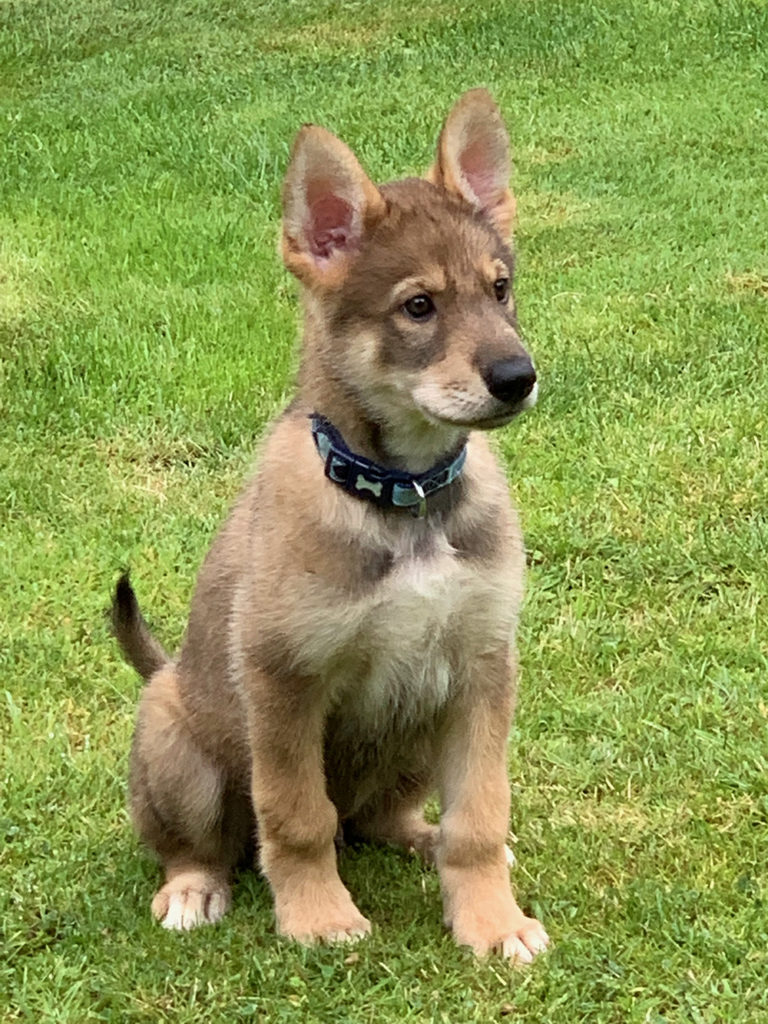 His about town moniker is Tex.  Tex Larry Lupo of Wolfendom – The Lone Wolf Timber Dog.

AKA #TyrannosaurusTex #Texterminator and many other punny-like nicknames I have ready to go up my sleeve.  Please feel free to join in.

I did consider calling him ‘Wesson’, cos, ya know, that would have been amusing. 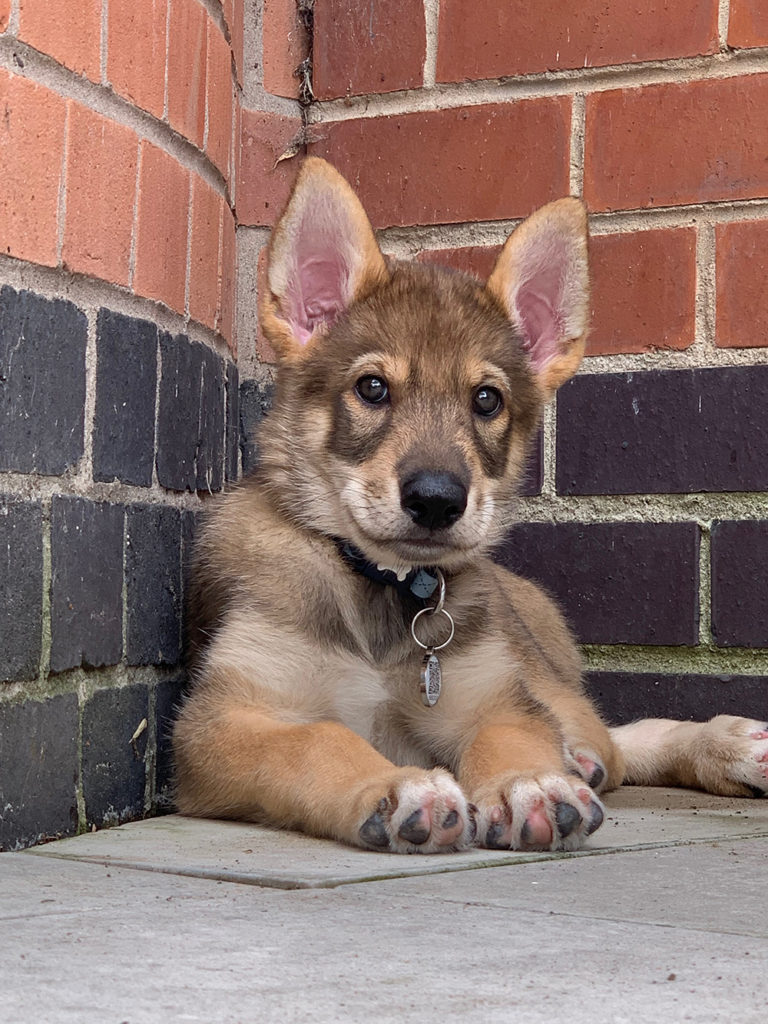 As a relatively new breed, not many people have heard of the Timber Dog.

“The Timber Dog Club UK are still in the process of creating new bloodlines. New bloodlines have been introduced to improve health, temperament and conformation. All Timber Dogs to date carry recent wolf content, it is relatively low – But it is still there. Therefore families overseas, especially in the USA need to keep this in mind when enquiring for puppies as some States in the USA do not allow dogs with any wolf content. “

The breeders definitely know what they are talking about, hence the long waiting list and produce only the best dogs to those who they deem worthy of dealing with such a breed. Their Inuits are closely related to the wolfalikes used in the Game of Thrones series.  My breeder has a beautiful Timber dog who actually met Karl Drogo.  I would have died.

Below is a picture of a Timber wolf on the left at 9 weeks old and my low-wolf-content Timber puppy dog, Tex- Mex, on the right at 8 weeks old. 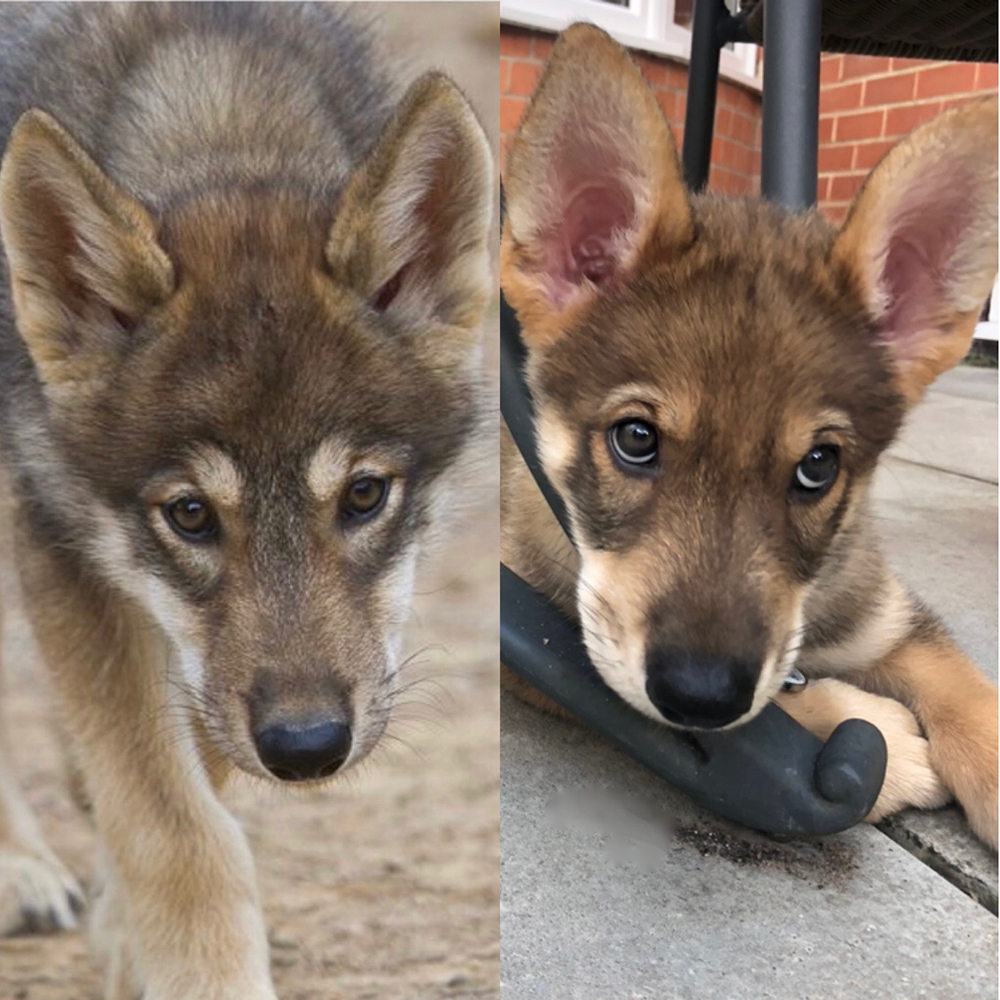 Because this breed is not well known, I have been asked so many bizarre questions when carrying him out and about to get him socialised, stopping to sit outside coffee shops in order to meet lots of interesting people. 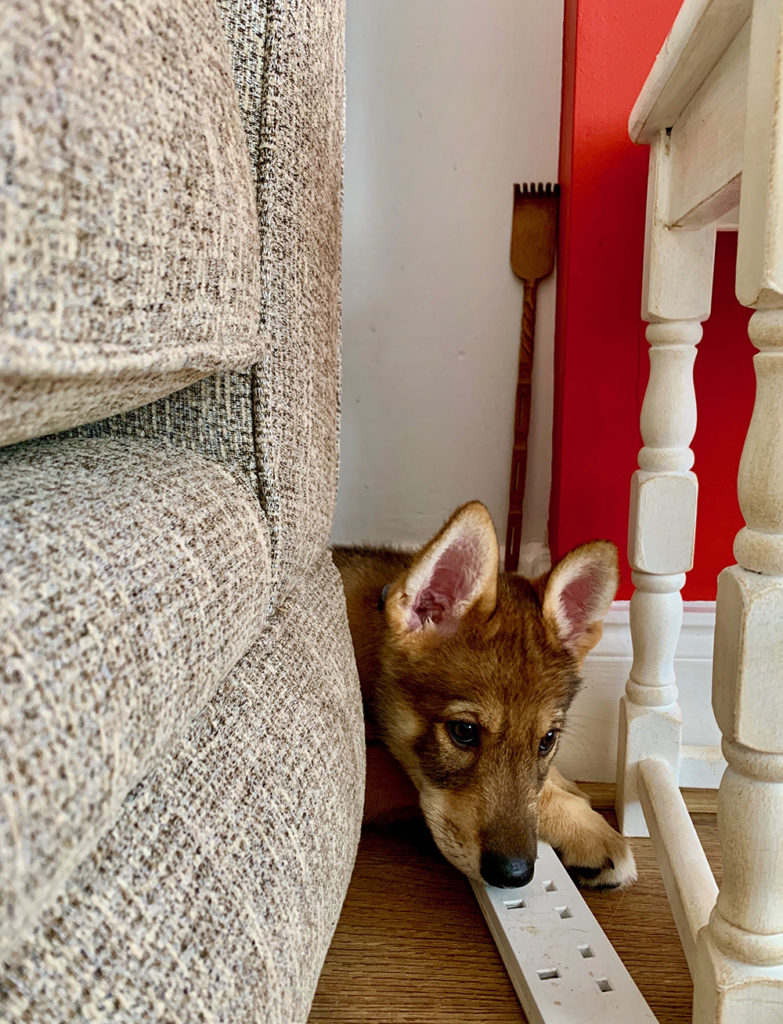 I have started to take the path of least resistance.

“It’s a one off.  An opportunist poodle came across a sleeping Kangaroo.  There was a jump he wasn’t expecting…” 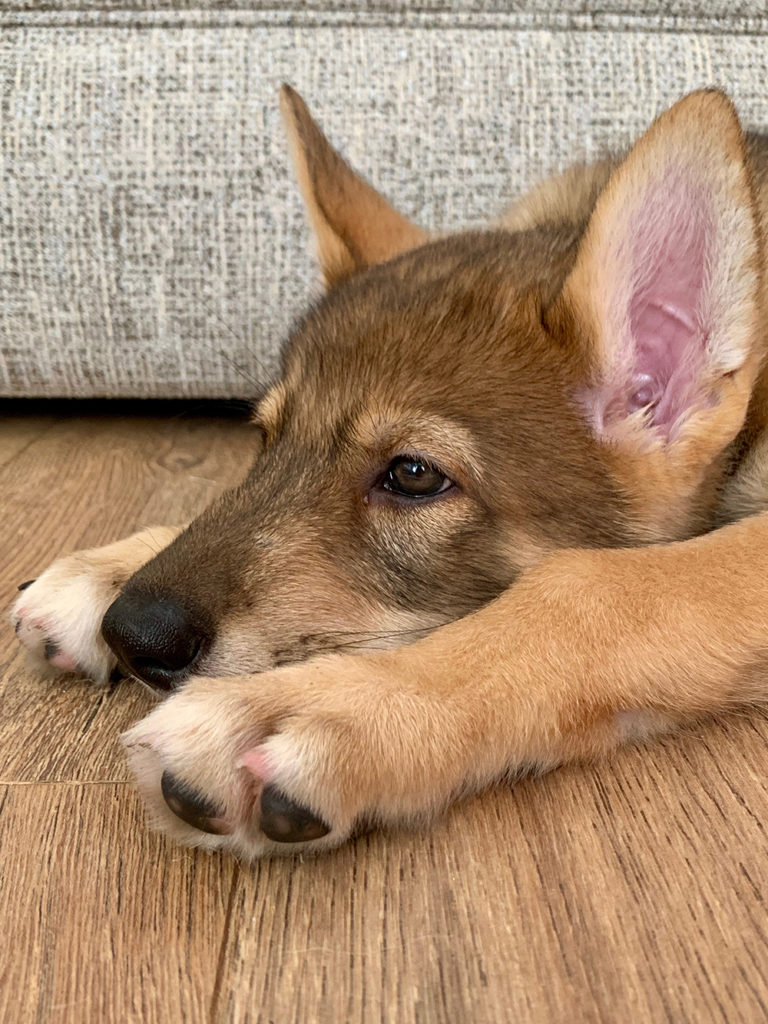 But on the whole, he has been met with dribbles, tears of joy, open mouthed wonderment, and melted the hardest of hearts with his adorableness.  I’ve never had so many visitors.

He’s forever at my feet and I am unable to walk properly anymore because he has turned into my shadow. He knows who the General is. Good dog.  And, he howls when I eat a bacon sandwich because  bacon is for dogs, obvs. Smart. 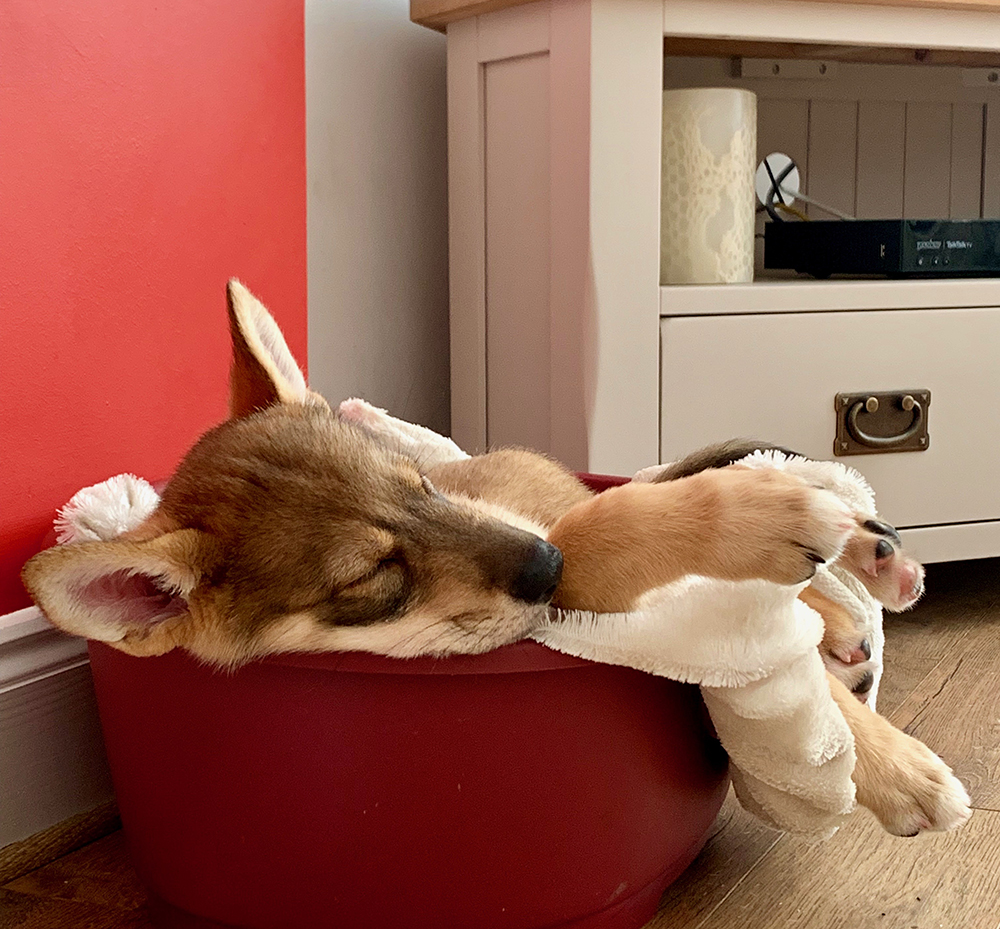 A Dragon, a Truck, and a Tex. Who says a chick can’t have everything?

Yes, I contemplated it for a while. I’ll add it to his list of other names! 🙂

Tex is going to be a formidable wolf/dog! The thing about wolves is that they need constant attention and will demand it and will want to play (sometimes play hard). I think that it was wise to buy a mix rather than a wolf, and Tex is very cute (while being an apex predator at heart). Wolves are very loyal to their pack and you’ll see that in him.

There is something about a woman and her wolf.

Isn’t he just! T. Larry! He already needs constant attention – even if he’s asleep and I move to another room, he gets up and follows me to lie down – has to know where I am at all times. And yeah, he has a very naughty defiant side too!

There will be something about this woman and her wolf, just you wait and see! #DoubleTrouble

I’ve been on a waiting list my entire life…

Jack London is very jealous of you, he wants his inspiration back!

I’m rubbish at waiting for anything, my sweet – it makes me stressed.

Oh my, what an adorable pup!

Of course T Larry will attempt to lead the pack, it’s in his nature. But you must remember that you are the ALPHA, not the puppy.

Most adorable. Textra Special!
T.Larry has tried to enforce his will but is in absolutely NO DOUBT of who is boss! I’ve told him on several occasions, ‘Me the Alpha – You the omega’ 🙂

Be sure to socialize him at every opportunity. I know you are already. You’ll need to do it regularly for the first two years otherwise he will be too aggressive towards any strangers like the mailman or any delivery service, or for that matter… anyone. When the lights go out he’ll know what his job is anyway. All dogs do.

Awww, I knew you’d like him, Nox! He’s got Roscoe ears at the moment!

I’m on it. I’ve been told that this particular breed with wolfie in them can be very demanding, obstinate, and wilful. Thankfully, traits I also possess in abundance. Met. Its. Match.

Be advised My Dearest Julesy that you may be in danger of litigation. You have obviously ignored this VERY noticeable notice :
PLEASE DO NOT USE ANY PHOTOS OR CONTENT WITHOUT PERMISSION OF SHIMA ONIDA 2019

If you CAN provide proof of such permission from Shima Onida , fine.
If you CAN NOT, you will have to bargain with me to keep my silence.

Me? In danger? As IF I would break any rules! Tch! PPS… you know better!

So, what do I have to do to keep you quiet?

But, but….he’d love your kitties!

Hello, Jules. How are you?

I’m much better now. How are you my lovely, awesome sauce friend? Missed you.

Surely, you should have called him Mildew, because… “it’s a wolof!”
https://www.youtube.com/watch?v=MFYomQylE6E

Damn cute though.
I can see what’s gonna take up most of your blog writing for a while 🙂

Haha! I should’ve!
Wesson – as in Smith and Wesson the gunmakers. Nobody would’ve got it here.

I’m trying not to do the doggy overload despite having a gazillion photos already!

Does T Larry howl with a British accent… and remember, remember, the 5th of September. You need to take the wolf to Parliament in a week. He is sure to sort things out.

Well, LL, that’s in November but September sounds better and I agree that the sooner the wolf is down there sorting out the wheat from the chaff, the better things will be!