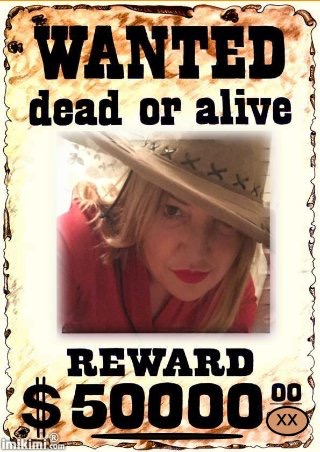 “Houston, we have a problem.”

“She’s coming. For a whole month. Maybe even longer if she gives us the slip.”

“She? You mean HER? No, you cannot be serious. Can we not intervene?’

“No. She’s protected by HRH, Her Majesty’s Government and MI-6. As you know she’s a master of disguise and a mentalist of the highest order so it’s a DEFCON 1 situation.”

Yee- Haaw!  I shall be arriving in Houston, Texas at the end of March in preparation for your forthcoming entertainment. I am SO good to you lot.

I don’t know what I will be writing about and am just going to let Lady Destiny take the lead and go with the flow. I have a few ideas of things I’d quite like to do such as:

1: Mastering the art of serious weaponry.
2: Going to a Rodeo.
3: Finding the way to Amarillo.
4: Going to Galveston, Oh, Galveston.
5: Checking out the Alamo in San Antonio and trying not to end up drunk in the river.
6: Making a cowboy hat and boots look cool and back in London fashion week.
7: Finding American manhole covers to photograph. And doors.
8: Trying to eat a whole cow with BBQ sauce on.

I’ve looked into Texas and found out that so long as I don’t strip naked, get on my camel, swear in front of dead people or write on any cows, I won’t get arrested. Despite me being a bit of a lot of a maverick, I will try not to do the aforementioned and neither will I eat calf fries or play rattle snake round up. I will however, try and capture some greenhouse gas to sell on eBay and find myself a pet armadillo and call it Basil. Sometimes I might just stay in and eat bacon. American bacon is my weakness and the thing that could lead me into trouble.

I may also ‘el paso’ from one state to another, and yes, I mean that in both senses. I suddenly had the notion to take the ‘Midnight Train To Georgia’ except there isn’t one which is rather stupid.  I was going to go on a rainy night and make a bet with the Devil for a gold fiddle.  I will therefore have to take planes to other places should the temptation arise. Who knows where I’ll end up but I have my Union flags ready to stake in the ground and reclaim the colonies. I shall also endeavour to teach y’all how to speak properly, make tea correctly and the art of English trifle. In order for me to remain sane I am going to smuggle in Walkers Cheese and Onion crisps, Monster Munch and PG Tips.

So, my American allies, when the skies start to darken, random typhoons appear, lightning strikes more than twice and the San Andreas fault shifts a little further on the afternoon of the 29th of March, you know why.

Could we have kippers for breakfast
Mummy dear, Mummy dear
They got to have ’em in Texas
Cos everyone’s a millionaire

I’m a winner, I’m a sinner
Do you want my autograph?
I’m a loser, what a joker
I’m playing my jokes upon you
While there’s nothing better to do….

Have a nice day!

Love This!
…and I was actually listening to “Breakfast in America” this very morning! ☮

See, how manipulative I am? Even my telepathy spreads like rampant waves across the water and has y’all hypnotised.
Thank you, Anthony 🙂

Ballsy? You calling me ballsy, Larry? I have more than a centre court final at Wimbledon. I just cunningly disguise the real me with finesse, composure and manners. It’s called a false sense of security…
Whilst I can’t get too many flags in my luggage, I shall bring my Sharpies and chalks so I can graffiti Brit colours everywhere. Shame our standard is so complicated – might just go for the George Cross since it’s St George’s day when I’m there.

I just knew you’d put your inheritance to good use, Jules! Don’t forget to interview the cowgirls – I believe some of them get into interesting positions!

What’s the point of any kind of inheritance if you don’t utilise it?
I intend to become the NEW cowgirl of the moment and teach these natives more wily tricks. Leave it with me, Mr. Gorilla Bananas, I shan’t let the English down.

Thelma without Louise is like toast without lemon curd
I’ll miss you but will look forward to reading your adventures & be counting the days till you return ……… Or send me a ticket to join you!

Aww.. me too mate. Toast without lemon curd is just pointless.

I’ll face time you regularly – stay up late so I can log in GMT!

So looking forward to this adventure, Juju!

Well keep reading, it should give a few laughs I hope.

It’s a fine place and I hope a few of the flags I left there are still fluttering in the breeze. Austin is great. Good blues and drinking to be done there. And go to the Book Depository in Dallas, where they have a sign on the door, devoid of irony, that states no guns are allowed in the building.

Tell me where they are, Ultratoast and I shall make sure they’re still flying strong!
What a great sign for a Book Depository on more than one level.

Only $50,000 reward?
Al Capone commanded more than that (if you take inflation into account) and you’re much more scary than him.

You be careful over there though, and if some bloke invites you to play Texas Hold ’em, remember that it’s a card game, not a sexual advance.

That’s just the starting price, Masher! I am indeed, way more scary so the price is insignificant. Dare to capture me if they will.

Texas hold ’em all. Well how can I possibly hold ’em all?! Thanks though, you know how naive I am.:)

definitely a better song than “California Gurls” by Katy Perry. did he write it while high? yes. high on Murica.

$50,000 in Texas translates to priceless in California, at least according to Google Translate.

i know not of Texas save for those San Antonio Spurs who are the only roadblock to my Golden State Warriors completing the legendary season. (hope i didn’t diss LeBron too badly)

Oh good Lord, what den of iniquity am I travelling to? I thought everyone was pious and proper nice an’ all. I thought that the nearest thing to wild was the dosey do. *)

My lovely, I shall be taking your Queen before your know it and leaving your King with no place to hide followed by my Z on a triple letter score and triple word placement of at least 70 easy points. Stay thirsty. 🙂 X