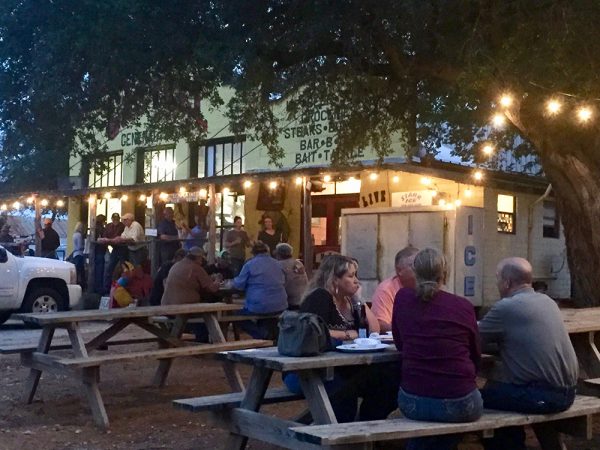 Art has the power to transform

“Jules! We have an adventure for you! “

“Art, you say? Oh, how fabulous what with me being an Art Philosopher and all! Let me put on my pretty shoes and put a notebook and camera in my bag!”

Princess in the Castell

Hours later after having been deposited with a relative stranger in a giant pick up truck but going along with it anyway, I arrived in the middle of nowhere. AKA Castell. The General Store, it was called. One might think that meant a nice little shop where one might purchase art, but no. Au contraire, my lovelies. This was a rustic shop come bar come hang out for a bunch of hardcore men arriving for the start of “Deer Season.” Hmmm.

So, there I was, right in the middle of camp deerstalker and artful pursuant. Piles of men standing around with several thousand guns, many beers and more arriving by the truck load with hearty cheer. Hardly any women. No.  And especially not “Out Of Your Depth, English birds”

It only took a matter of seconds for me to feel like the startled deer and I wondered if they might change my name to Bambi.

“You’re not from round here, are you honey?”

“What you doing here in the middle of podunk (I don’t know what that word means but that’s what they said) bumfuck nowhere?”

“Feeling like an extra in ‘The Running Man’ film right about now.”

“Get the lil’ lady a tequila. You can drink tequila, can’t ya darlin?”

“You know what tequila means, huh? It means tequila’ll your clothes off!”
What a colossal mistake, trying to fluster the British chick. Well. I wasn’t going to be having ANY of that. This was the moment. Do or die. I either ran off into those Texas country hills being followed by a buggy and a lethal crossbow or showed them my mettle. I took twenty dollars out of my purse. “I’m betting I can see more shooters than you, tough guy. Bred on mead, me.”

And so it went.

But not for me, naturally. I drank them under the table and skillfully became one of the “The Lads” and fondly referred to as “Isn’t she a sweetheart.” Phew.

I got away with being inaugurated in the local creek which was threatened several times over but got conned into eating (what I was told was catfish) a rather large frog’s leg. Thanks. 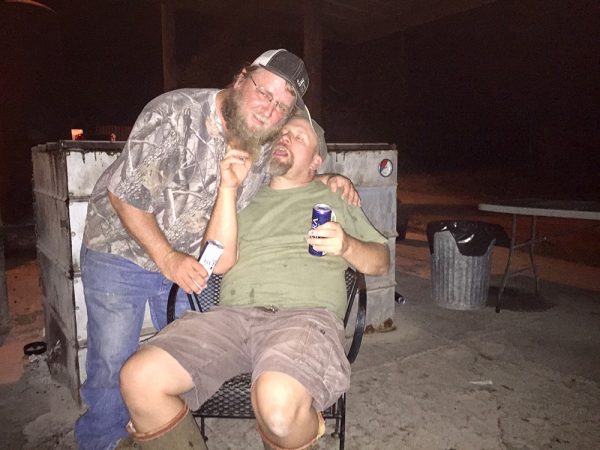 After several hours of insanity at “The Store” I left with my head held high, if not a little hazy to the place where I was staying.  Some ranch in the middle of flippin’ nowhere in 350 acres of…..well….grass and a campfire. 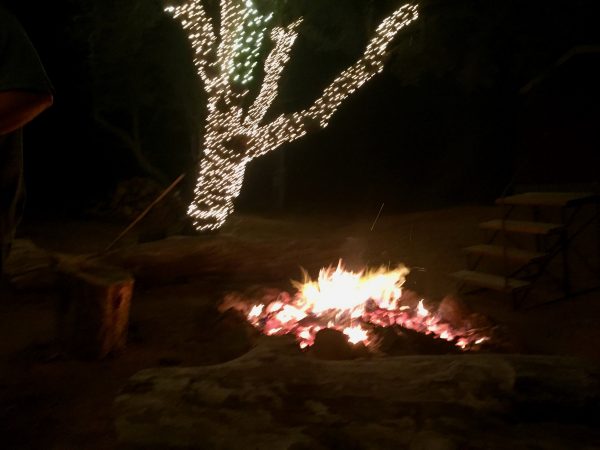 Here, I met some more new friends who also saw the need to test the girlie. On the table lay a couple of guns and a hundred yards down the field, a target.

“Like hell!”  said another. “Miss Jules has to be up at 5 am brewing the coffee ready for us boys and then preparing the meat when we bring it home!”

“In your dreams, pal.  I’m a city bird.  I’m not going to hunt anything.  I buy my meat in nice little prepared packets from Sainsbury’s and I’m not getting up at 5 am”

Regardless of the fact I’d been drinking, the ranch owner passed me his “Golden Boy”  and made me shoot the target in the dark until all rounds were gone with a series of commands, “Crank it up, girl, and again and again and again!”  Not content with this I had to follow on with .38 Snub nose. 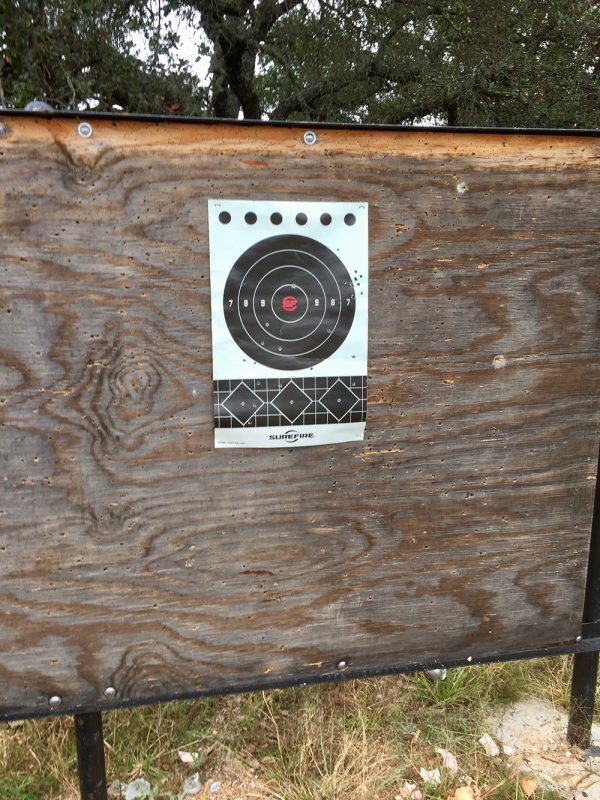 Thankfully, nobody died.  I don’t know how. 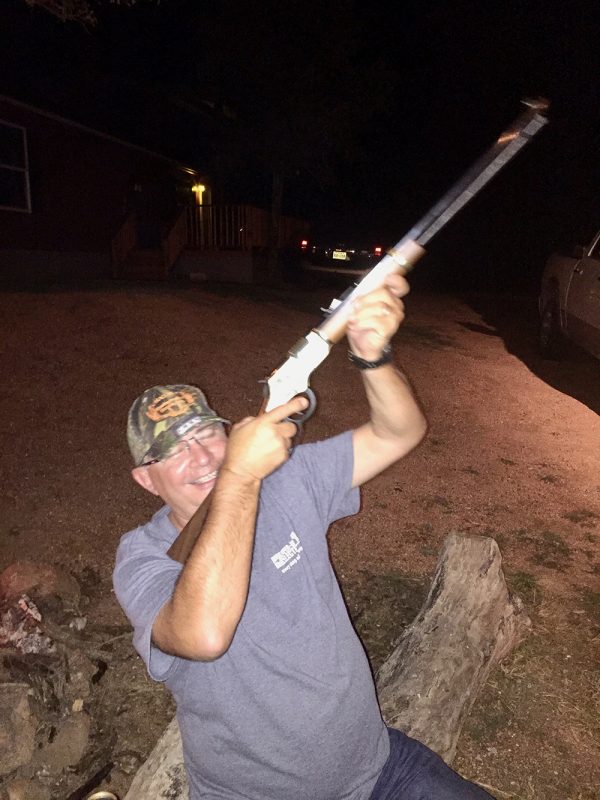 Fun and frolicks at the Rancho de Bonkers. 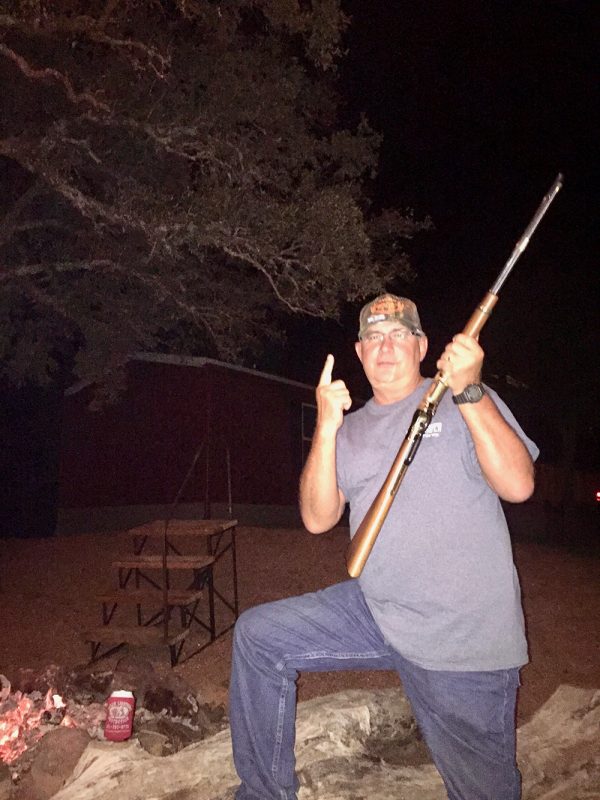 4.30 am, I got to bed. I had to walk in the pitch black through critters, oh and apparently a cougar that was on the loose that nobody had managed to shoot yet.  I got shown to my pull out, couch bed in the ranch house living room as the hunters around me bunked up in other bedrooms.  One hour later and to my utter shock and horror, random guys began to just walk in the house ( right past my bed) shouting for the deer hunters to be up and at it.  This experience was so far removed from Girl Guide camp I can’t begin to tell you.

“Jules, you getting your ass up outta bed?”

Do you know what they gave me to drink in the morning?  Coffee with Baileys Irish cream.  Apparently this is tradition.  I spat it out. Insanity. 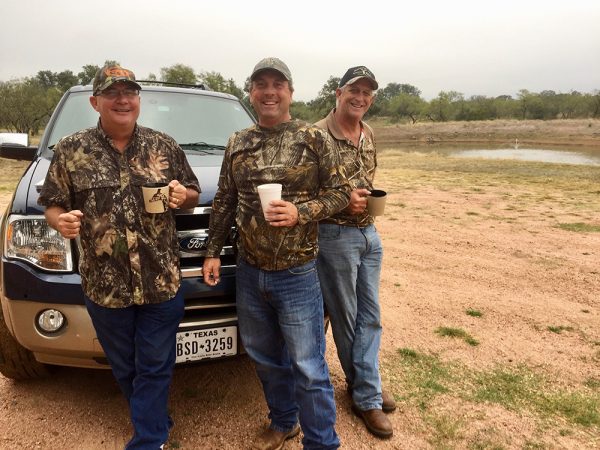 An everyday patio table…Tootsie Rolls a must. 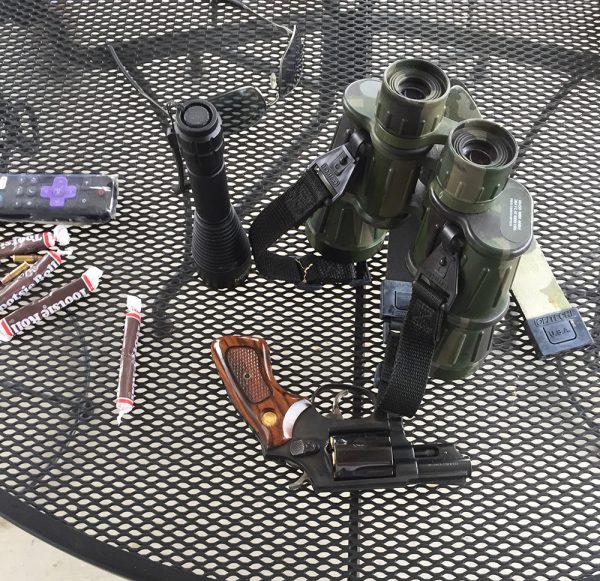 “Come on pumpkin (my new moniker)  lets show you a deer shooting house.” 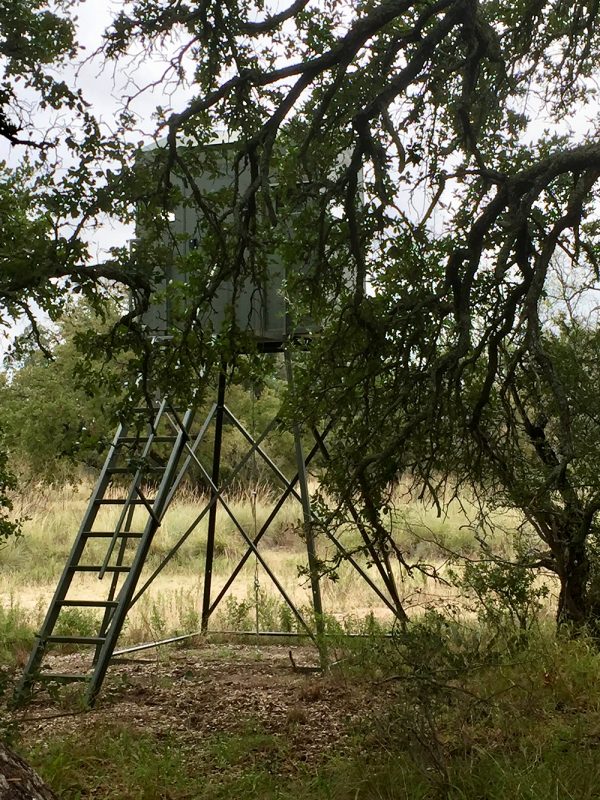 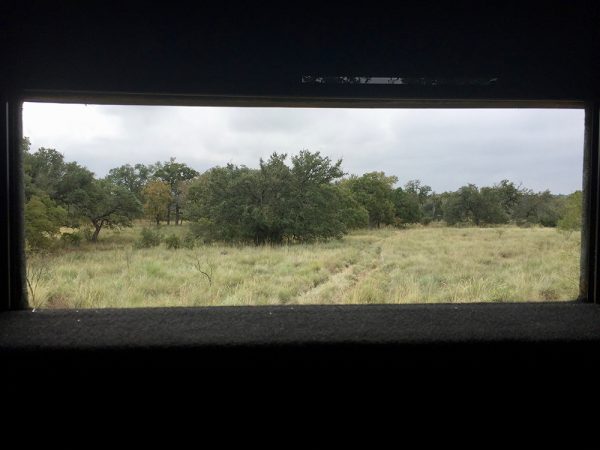 I sat in my room with a view listening to the sounds of gunshots being fired everywhere, praying to God that I wouldn’t be found by a stray bullet.

After the hunters came back it was brisket BBQ, beers and football. 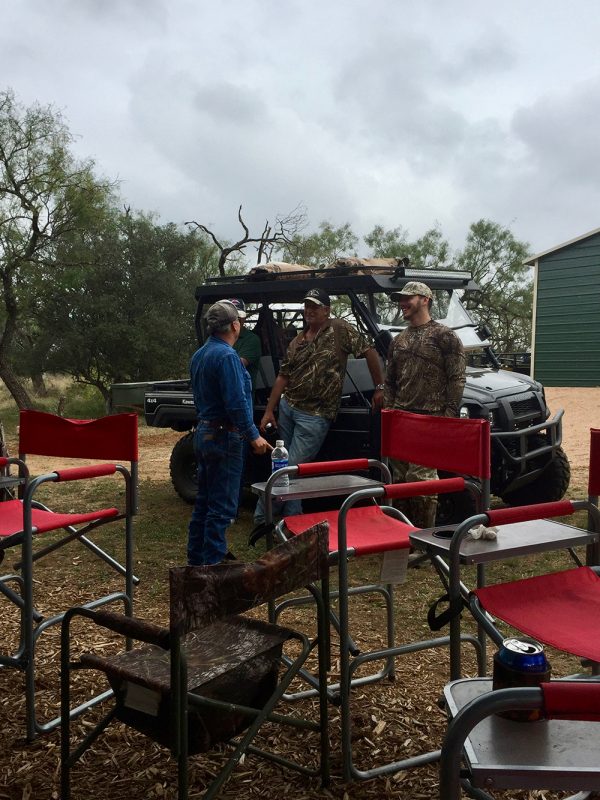 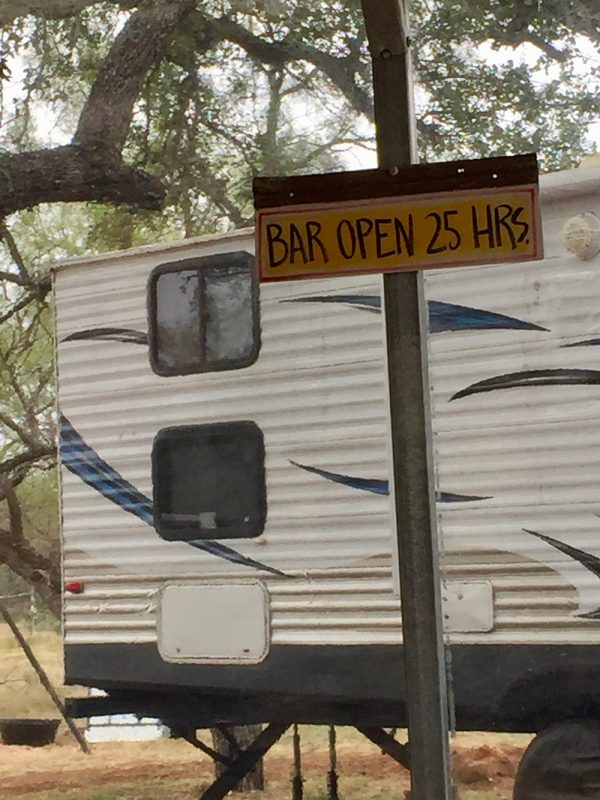 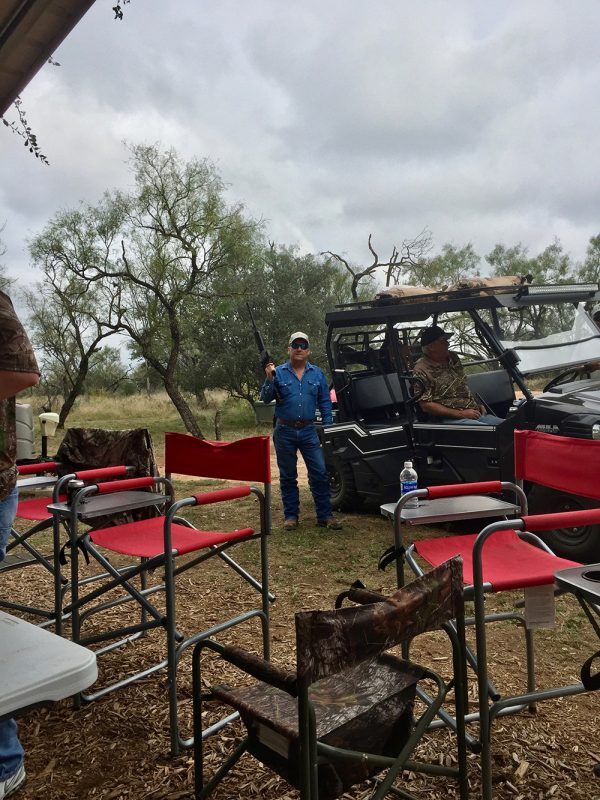 And….swinging chicken smoking in a can in the trees.  Like you do. 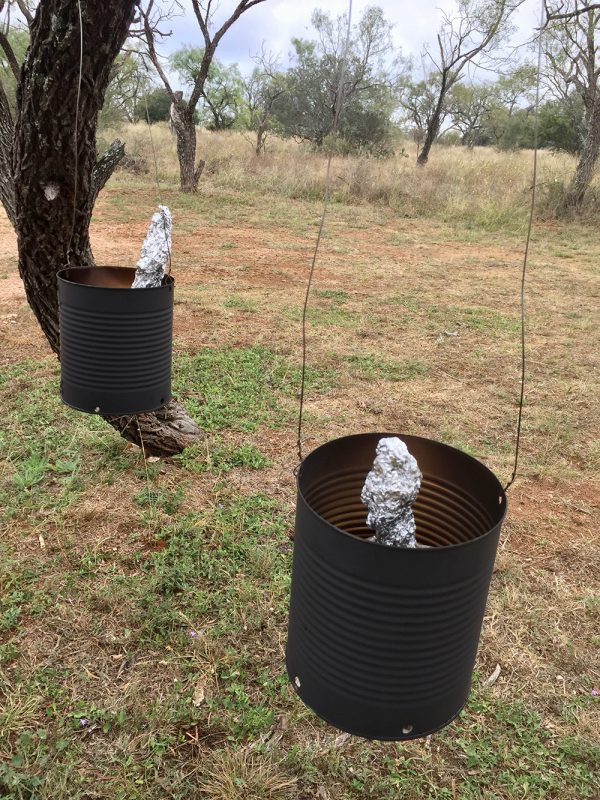 What is this?  Indeed, you may ponder as did I.  This, my friends, stops flies.  What? Oh yes.  A penny in a zipped bag of water hanging from the ceiling keeps insects away.  Whatever.  Apparently it should have seven pennies in but they couldn’t be bothered with that. 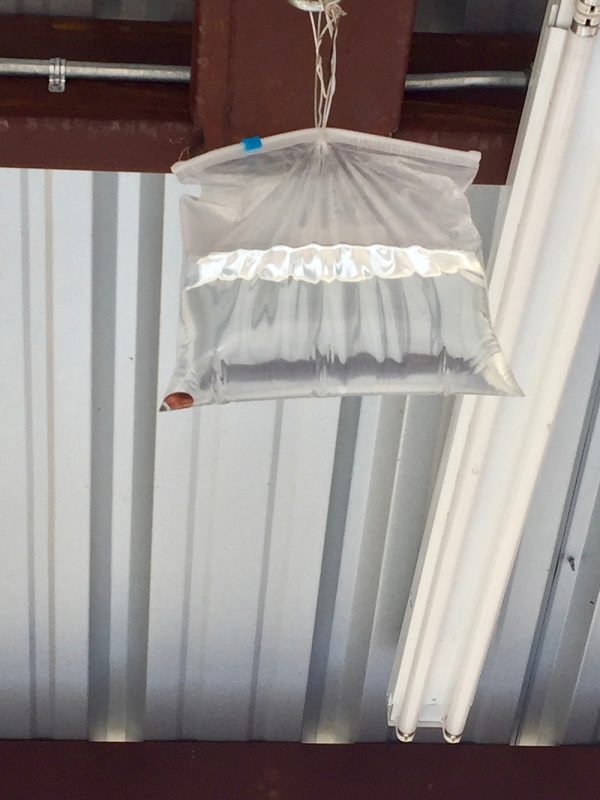 And this is all you need to know.  Nothing ever happens here.  In fact, did I really end up spending my weekend at a Hunting Camp or was it all a crazy dream?  I think it’s best if I file this one under “Absolutely nothing happened.”  Safety in denial. 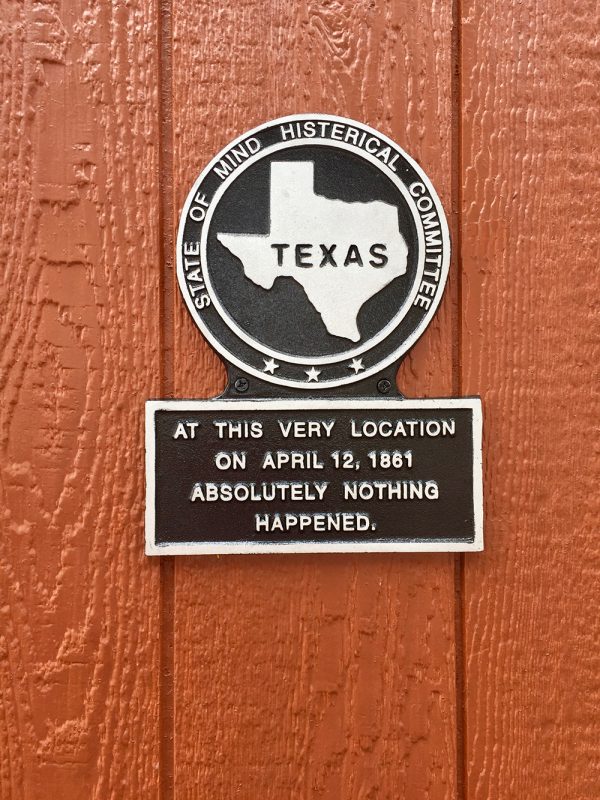 So when did you ever go the Girl Guide Camp then?

When I was pure and innocent. Remember that? 😉

It’s about time that somebody took you deer hunting. Now you know what it’s like. Next time, you can sling a rifle, hike out and maybe kill your own deer…which would mean that you’d need to clean it, drag it, hang it and skin it on your own with somebody suggesting where to cut. So bring a sharp knife as well as your rifle and ammo.

I know that you’ve been to Bass Pro Shop. They have all the equipment (and way more) than you’ll ever need.

Larry, I can’t kill an animal. However, get me that crossbow from the Bass Pro shop and I think I could be very threatening indeed. Especially if I wear my clown nose with it!

Except that, with a crossbow, it takes a LOT longer for a deer to die. There are very few instant kills with a crossbow. And the animal will sometimes run over a mile – leaving a nice bright red blood trail (if you have properly placed the quarrel in the heart) and the blood pumps out the nice, ragged hole in the heart. Finally – at the end of the blood trail – you’ll find where the deer finally succombed to exhaustion, blood loss and fear.
Then, you get to carry the deer home, gut it, skin it…and start cooking it.

Oh goodness, that’s horrific. I could never kill an animal, least of all a beautiful deer. I’d be in torment. AND i could never gut or skin an animal either. I’d be sick. However, I’d still like a crossbow just cos!

I would be more than willing to take LL up on that offer if you’re not up for it!!

And I’m most CERTAIN, Larry would take you, Bossman!

How does the song go? No one gets of here alive? But you did! Well done.

Jim Morrison didn’t get out alive but I did. Miraculously! Goddess power.

I love the idea of the Venus fly trap.. will it work for them whitchety grubs cakes!!!

Ha! I think it’s worth a try, Cakes! Let’s make one when I get back and then sell them to Wilko’s!

Jules, I have never known anyone who gets into so many odd and crazy adventures! Is there anything you haven’t done?

Oh, I’m sure there are many things yet, Break Red. However, I’ve certainly had a good share more than most. Living the dream and all that malarkey!

I’m glad no one shot the cougar, Jules. I assume she was rather forward, as most cougars are, but a man should be capable of wrestling her off, or submitting to her advances if he prefers. Have you seen a rattlesnake yet?

Agreed, Mr. Gorilla Bananas. Man should be capable of dealing with such a fine cat and not resorting to gunshot.
Oh. I ‘ve seen plenty of rattlesnakes. Plenty. Can spot them a mile off.

something happened at that location. that sign was put up.

i can’t watch Bambi to this day. i only found out what twitterpated meant last night.

Something nefarious indeed, I think too.

When they shot Bambi’s mother I cried for the rest of my life. Disney is an evil bastard. Totally twitterpated by Bambi and crew. *)

You’re a brave, gal, Jules. But you know, if you take a big buck out of commission and put him on the supper table, that just gives the poor, long-suffering young bucks a shot at the does. It’s an act of mercy! Would you deny those youngsters a chance at sex? How cruel! LOL!

Well when you put it like that, Grunt…… it’s almost cruel not to! 🙂

That was a mighty abrupt ending…and only covered night and day one. Is this “to be continued” on next
weeks Whimsy with the tale of night and day two?
It should be as interesting as this was.

Nah, I’m done with hunting now, Sol. I think that’s enough for anyone. New adventures to be had.

I don’t blame you, there. But seriously, Sol has a good point. Those were some good stories. Did you leave out any other good ones? Anybody shoot themselves in the foot or get mauled by the cougar? Did you have to kill anyone for trying to get you up before dawn? That would have been justifiable homicide, probably. I’m surprised you didn’t like the Irish coffee, but you’re a tea girl, after all. I really hope you didn’t eat any of the Tootsie Rolls. Those are far worse than Marmite. Did I say that out loud? I shouldn’t be bad-mouthing Marmite on this blog, if I don’t want to get banned. 😉

I think I pretty much captured the essence of the adventure give tor take a few things that are probably best left unpublicised.
I would normally be most delighted with a coffee and Baileys but not after a belly full of Tequila and a mouth like a Tramp’s shoe. Insanity. As for Marmite….HOW VERY DARE YOU DISS THE FOOD OF GODS’ Come her and say that to my face! Yeah, I’ll make you eat it till you LIKE IT! HA! Now apologise! 😉