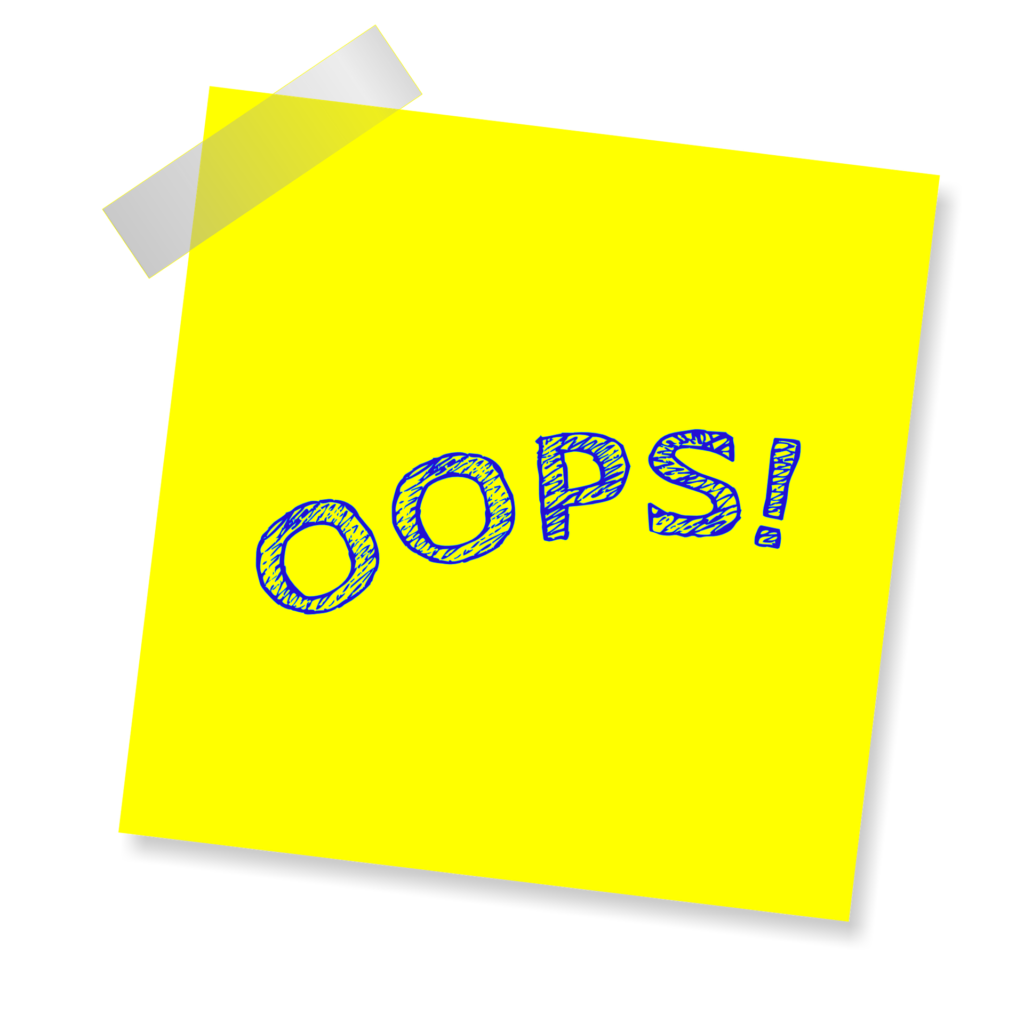 Let’s just start with the fact that I was tired. Very tired. Sunday morning after the clocks had gone forward the night before which always gives a jet lag effect. Not to mention that I’d got up at 5 am which in my current state of mind was 4 am. Still in my dressing gown, trying to make a cafetière of coffee. Forgot to grind the beans the day before so my little ground coffee pot was empty. Had to go through that rigmarole. Spilt coffee grains everywhere. Bollocks.

Sat down at my little kitchen table, watching the news but not really listening because it’s the same old story. Groundhog Day. Stuck in a loop.  And then a banner alert flashed across my iPhone screen.

I did that eye-rolling thing up to Heaven and followed the instructions to set a new password. I sat there for ages trying to think of something I wouldn’t forget because I’m sure, like many others, there’s a handful of passwords that you use and can’t ever remember which one goes with which site or app. Get’s right on my nerves, to be honest.

I get into the site and have a quick nosy around. All seemed to be OK so I didn’t know what that was all about. I scroll through this year’s purchases and it all looks legit. And then I spot the villain.

The devious little delinquent had taken £297.84 from my account.

This continued until I noted several transactions amounting to around 600 nicker.

Boy, did that make my coffee taste bitter. Resentment does not go well with the dark chocolate and cinnamon notes of an Italian roast.

Felon and On and On

I had to fester for a couple of hours, pondering on the devilry of evildoers and rapscallions and winding myself up into a frenzy about everything that is wrong with this kind of people, and, how I think they should be dealt with.

We’ve even got dognappers going around the area now, nicking desirable hounds from back yards and gangs rolling up in vans taking your dog off you on the street. Apparently, since lockdown, your pet pooch has become a much-valued commodity fetching more than 100g of crack. Because I’m already a highly-suspicious-of-everyone individual, this now has me being rudely aloof and ready to take action with anyone who starts paying attention to my dogs, which is a frequent occurrence.  Don’t think that just because you’re a doddery old granny I’m not on to you, lady. I bet you’ve got a ring of grandkids and great-nephews running this gig for you why you rake it in. Back off from my hounds or I’ll have to use the attack word.

But, aside from these reprobates, who are the blockheads buying stolen pups from them?

Where’s a pandemic when you need one?

Anyway, I eventually got chatting with a PayPal Robot. That was a waste of time because robots can only deal with 1 transaction at a time and not several layers of fraud. I gave up and went to look for a phone number. Like a bloody maze.

When you ring Paypal you have to input a special pin-code before they answer. Of course you do. Why make it simple?

I eventually get to speak to a chap with an Irish accent.

This got me on the defensive straight away because being English he’s bound to hate me and not want to help. I’m already despising the Jewish clog-hopping Ishmael Vanderbik that’s right royally ripped me off and I don’t need an anti- English Irishman giving me any shit. This was the sort of mood I’d got myself into by 9 o clock on Sunday morning. Anyone not directly related to me at this point could go to hell in a handbasket. And even then, relatives weren’t necessarily safe.

“My account has been hacked. There are numerous fraudulent transactions dating back to October 20. Now, before you start asking why I didn’t notice them back then, let me tell you that I’ve had a very complicated year. Plus, I fully expect to get overdrawn near Christmas because I’m loving and giving. So, I won’t have noticed stuff leaving my bank account. Anyway, I’ve been too busy protecting my dogs from mongrel-smugglers. I want my money back.”

The Irish bloke was very helpful and accommodating.

“Ah, I see this rather large amount that has been taken from an Ishmael Vanderbik.”

Now we were mates, I could relax a little.

“Right? I mean talk about made-up names! He may as well have put Mickey Mouse and be done with it. I mean, come on – as if I’d pay someone all that money with such a fabricated moniker”

“Most of these have come from your eBay account so it looks like that has been hacked.”

“Well, it must have been because I rarely buy anything from there.”

“You need to call them on the number I give you because we will need to liaise with them. And make sure you change your password on there. Once you’ve done that we will refund all of these fraudulent transactions back into your bank account.”

I left the call feeling a lot happier with mankind than when I started.

I went on to eBay. I changed my password. Before I called them I thought I should check these supposed transactions against the PayPal ones. If at all they were there. I opened up recent purchases and scrolled through.

Looks across at chairs…

All other transactions for household goods stood defiantly in the morning sunshine gleaming through the window and lighting up my lunacy.

Turns out it was in fact my very self that bought all of these things including the rather lovely table from Ish.

I felt like such a muppet explaining my mistake on the return phone call to PayPal. Thank God for gin in a tin.

So is it a nice rustic table and chairs?

The plague has taken a toll on all of us, Jules. Which it’s important to crawl into a world of your own devising and write another novel – I think a Western would be just the thing. (You can bring the wolves with you into said world)

It is very nice – I love it! Goodness, aren’t I horrid! Poor Ishmael.

Yes, it has. Had enough of it all now.

Hmm. I’m not sure I have the skills for Westerns anymore. I think the plague ate my will, or the will to make so much effort without reward.

What a nob-head you are!… he said in a nice, loving, not-meaning-to-offend, kinda way.
That said, I was looking at my bank statement just the other day and getting all hot and bothered because there was an Amazon transaction on there for 295 quid, which was absolutely nothing to do with me.
Definitely not.
No way have I bought anything for that amount.
Someone has definitely hacked my account.
No, wait, there was that laser printer…

Haha! We are all going bonkers.

Well done! You’re up a table and chairs, thanks to good old Ishmael.

I know. That wonderful miscreant!

Don’t feel too crusty about this, dear. Last year when my wife was in hospital I dined (he said, obviously misusing the word) at the in-house McDonald’s. I put the $4 tab on my debit card. A couple weeks later I looked at my debit card statement, and saw a charge of about $300 to a payee by name of McDonald. Drove straight to the bank and told them the charge was felonious – felonious, I say! – and was not made by me. This bank protects debit transactions from fraud, and they shortly gave me a funds deposit to get me back to square one. Welllll … a day later I duly noted I’d bought an item from a fellow on eBay for the same amount. His name? McDonald. So the charge was legit, and the only crook was the bugger who made off with my brain. Red face at the bank ensued. Ah well, such is life in Geezer World.

Haha! That’s a brilliant story, Roger! Glad I’m not on my own here 🙂

sorry, that was me, but my boss Ahab says i really need to harpoon that white whale or i’m gonna get tuna-canned

get a Nescafe, the coffee George Clooney drinks

get a Poang, great for chair sex

I think all the world’s problems can be solved with Marmite and cheddar doughballs. *)

I think there’s a group of us, Ginny! Obviously the most special kind of people are prone to this 🙂

Ummm…what’s that you were saying Julesy?
You had me at “… Still in my dressing gown…” and I never got further than that image.
Sorry Luv.
Always Yours,
~PPS😘🥰

I forgot.
Hahahahaha!
You’re so easily led, PPS. That’s why I luvs ya!

Well look at you coming on my blog and everything then!

It sounds to me like you need to cut back on your purchases.

LMAO because I’ve done this myself. In fact, once, when The Man was still Active Military and got deployed a lot, I got a big Charge from a Midway Arms, which sounded like some seedy Motel in New Jersey that I knew my Man would never frequent, so I called to say it was not us. They refunded the money, only for me to discuss the incident with The Man to which he told me he’d purchased Ammunition from Midway Arms, a Gun site he used for his Hunting Supplies! I had to call the Young Man back and tell him to reverse the Refund, I’d cleared it up and it wasn’t some Seedy Motel rendezvous some Swindler had tagged us with the expense of for their dirty deeds… and when I told him what it actually was, he was Laughing as hard as we were. I felt like a total Twit… yet relieved we hadn’t been hacked and victimized. *Whew*

Welcome, Bohemian! First off I want to say that I love your profile pic as a clown. I often don my red nose and joker smile make-up because I find it hilarious so you’ve struck a chord with me already!

Haha! Glad I’m not on my own and yes, it does sound like a seedy Motel 6 or something. I don’t know how I’d feel denying a sale to a gun store in case they came round with loaded shotguns demanding payment. That could have gone tits up. Thank God you sorted that one out!

Thanks for the visit. Feel free to play here 🙂