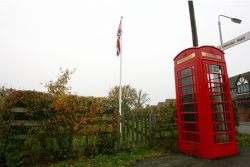 Im eagerly awaiting the conclusion today, of what I consider to be the most stupid piece of news to have hit my part of the world:
Back in April when William and Kate got married and we all got a day off (cool) The Union Jack flag was raised as is the norm.  The Union Jack (or Union flag as is the correct terminology as I think it can only be called The Union Jack if it’s flying on a ship) has since remained on this particular flagpole and has caused untold stress and trauma to some minorities who have complained to the council about how much it is upsetting them.
What?
Please see section of news below:
Quote: ‘When I do go outside, or if my friends do come round in the area, then I’ll have to explain to them, “No, this is not the BNP headquarters. It’s just the parish that feels it’s OK to have the Union Jack flying all year round.”’ He added: ‘How would they feel if I was to put a Caribbean flag outside all year round? How would that make them feel?’
Please, allow me to retort:
Well actually I wouldn’t care less if you put up a Caribbean flag and if that’s what you want to do then knock yourself out.  I’m all for people supporting their roots and not losing touch with their ethnicity.  Cultural diversity is what  makes this country great, but Mister, you also live in England and clearly accept this country as your home right?  The Union flag does not represent the BNP (despite them using it)  it represents a fine expression of unity as well as diversity. The British flag incorporates distinct countries, England, Scotland, Northern Ireland and Wales.  In fact its name “Union Jack” emphasises the very nature of the United Kingdom of Great Britain and Northern Ireland as a union of nations. The flag is also known by another name, this too, emphasising the idea of union.  I happen to own a great T-shirt emblazoned with The Union Jack.  Does this mean I shouldn’t wear it?  Does it incite racial discrimination?  NO.  How ridiculous.
As for you apologising to your friends when they come round ..err.. what kind of friends do you have?
Parish councillors:  Do gooders.  Up there right now with Traffic wardens.  You are so PC about everything that ironically it’s not PC and offends many others.  Well done Mr Harbury – Carlisle for standing up.  A councillor with backbone.
Can you imagine going to America and asking them to take down their flag which they fly with pride all over the place?  Me neither.  Or any other country for that matter.
The UK is a place full of heritage, history, free national health service, social care, free speech and tolerance. Apart from the fact it rains way too much and is stupidly expensive it is a great place to live and and it’s multi cultural diversity should be celebrated but it’s identity should be something you are proud of. Including it’s flag.
I’m interested to see what the results of the Council discussions are today but they’re probably busy discussing whether or not we can call them ‘Christmas Lights’ this year.  Don’t even get me started on that one.

I am outraged….what is happening to this country I used to be proud to be British but we have gone politically correct mad…what right has anyone got to tell anyone not to fly the flag of our country NONE….if the said victor Meldrew doesn’t like seeing the flag I suggest he moves to somewhere where that more suits his personal preference….possibly a remote island so he can sit and moan about nothing on his own!!!! I find his comments offensive and bordering on archaic think I might put the gay flag out that would really annoy him no doubt!!!! Elaine….British proud and just about to get a copy of your t shirt made which if I loved in Gamston would wear it all the time with a gay flag bandana!!!!

Ah, the flag issues happen in the US as well. I am of the same mind as yourself. You choose to live in this country and call it your home.

As a citizen of a nation born of immigrants, I understand the desire to proudly wave the flags of our fathers. I see flags from various nations all over my community.

I did once take offense to a person who chose to fly both the flag of their country of origin above our nation’s flag. But, I’m bitchy that way.

Someone should remind these silly people that the Union flag flies permanently over the Houses of Parliament.

Scroll down this post to find a picture of Lady Daphne Wayne-Bough holding the Union flag umbrella I bought for her. She uses it to annoy her Scottish lodger, the rebellious and truculent McChe.

Watched the video. Canada is a culturally diverse country, too. God forbid the hoopla (and PC crap) that would arise if anyone objected to our national flag being hung. And it is – in many, many places – not just for special occasions.

Shall I say “Happy Holidays” to you now or wait until December? 😉

It is ridiculous to be offended by a country’s flag flying anywhere in that country! Why does that guy live in England if he is ashamed of the flag? Very strange. In Canada our flag is flying at gas stations.

Hmmm…I am exceptionally found of the Union Jack, after all the American flag has its roots there. The Union Jack to me is one of the prettiest flags on the planet. There is so much history behind it I can’t imagine not flying it ALL THE TIME. Hell, its flown here in DC in numerous places ALL THE TIME. If flying a national flag offends then for heaven’s sake don’t come to Washington DC. I think we have more US flags flying ALL THE TIME than we have roof-tops. Welcome to America. And the response should be the same in the UK. This should be one of those famous “non-issues” but I suspect someone will willingly turn it into a subject for Parliamentary debate.

We have a flag! http://youtu.be/hYeFcSq7Mxg

If you choose to live in a country you should honour its history and culture. I would make every potential British Citizen swear allegiance to the Union Flag, as well as Queen and Country. The Union Flag should be flown with pride in our countries glorious past and the many who lost their lives for our freedom and democracy. The more our flag is flown the less it will be associated with minority bigoted political parties. We are lucky to live in the United Kingdom which is why so many refugees are trying to joiin us. Lynne

Elaine: Hilarious! I’ll get you a T-shirt!

Angie: I love your bitchiness 😉

Mr Gorilla Bananas: I like it! You should get her one with the George cross on that will annoy him much more!

Beth: You may wish me “Happy Christmas” ;0

Clark : And we will use it! Go Eddie!

Lynne: I swear allegiance. We should show pride.

Anyway…as it happens folks the vote was in favour of keeping ‘THE FLAG FLYING HIGH’ by 7 votes to 2. There’s hope yet!

exactly, its ridiculous to be offended by a flag :p
and i love the UK too, especially the lake district 🙂

Jaya J: exactly! Ahhh, the Lake District is breathtaking. I love it there too!

I love the lakes! Anybody spend time in “Buttermere”? I believe they have one bridge, two small lakes, lots of hills and one hotel (The George, I think). Sigh. I lived in England for five years. I miss it so…

Ah Dean..Buttermere is lovely. The Lakes are something else.

This is something I don’t understand with most people. It’s like that book I read about a Moroccan family living in France, bringing up their kids with a Moroccan culture and outlook – yet sending them to French schools. If you live in France, you live in FRANCE. I’m all for cultural integration and tolerance but it’s actually a religious law for most of us to respect and adhere to the rules of the country you’re living in.

Azra: exactly. You would think so wouldn’t you.

Jules, do you still have the Canadian flag in front of your gaff, in loving memory of, er, me?

David: Well of COURSE I do! I wouldn’t have it any other way. I love that Maple leaf, I do!