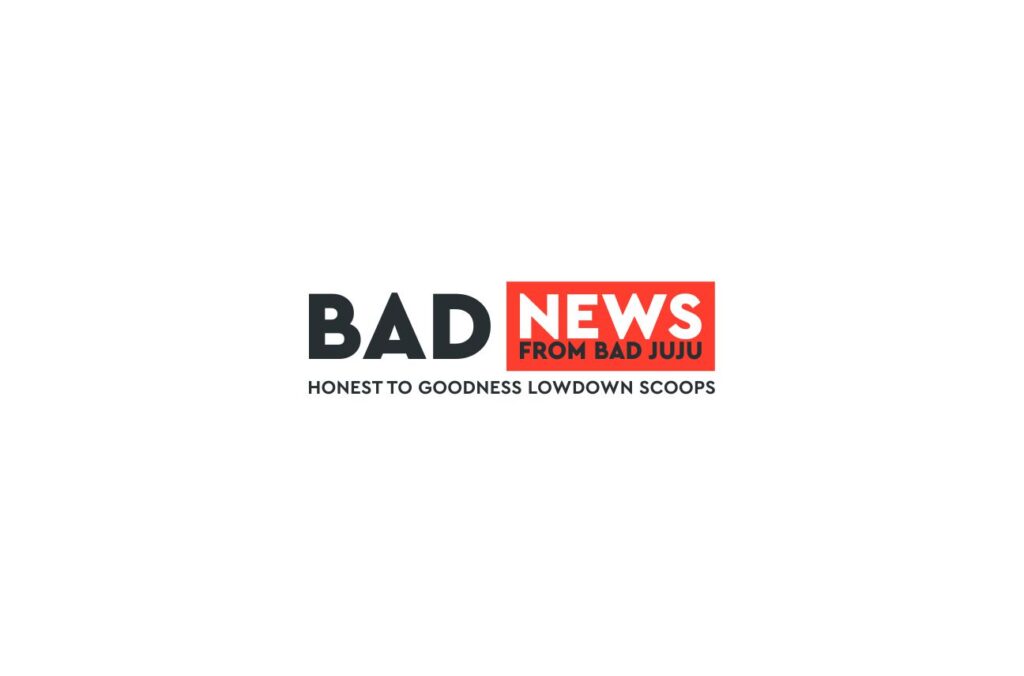 With Breaking News From Bad JuJu 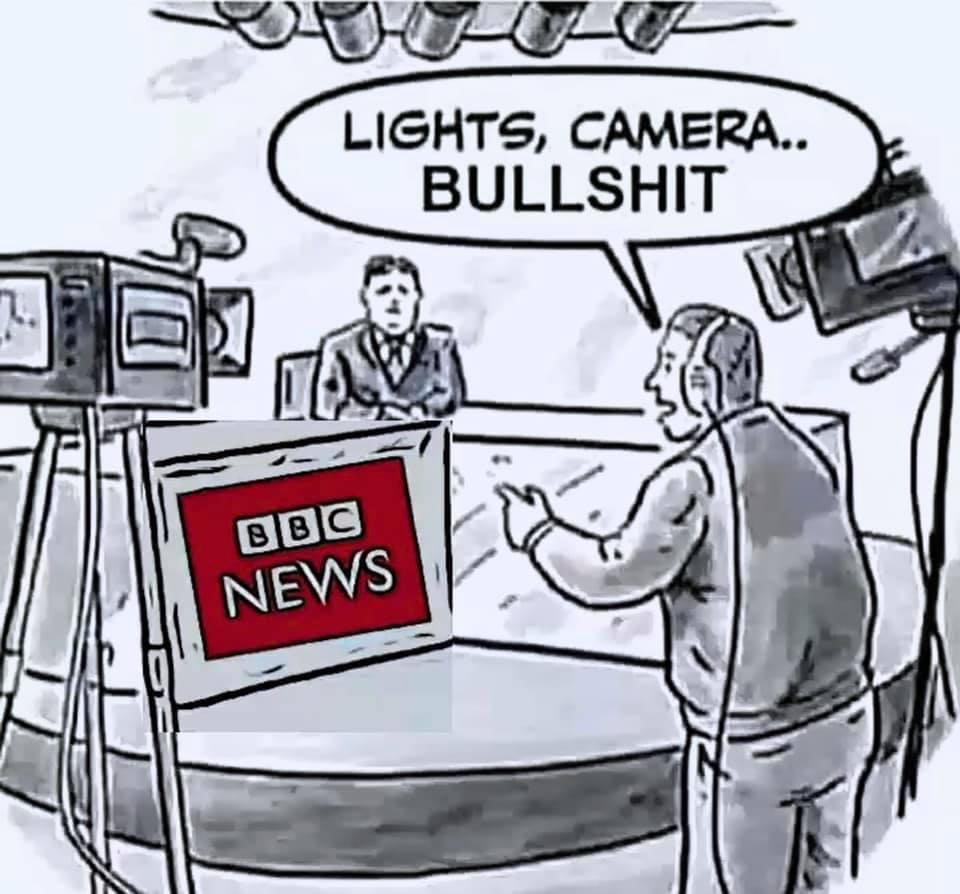 Thanks to the media’s narrative of instilling fear into the public, hundreds of people ( AKA wankers) have rushed out to panic buy fuel leaving petrol stations empty. Due to a shortage of HGV drivers in Britain, there are not enough tankers to deliver fuel across the nation. Many haulage companies are going under, unable to deliver products as they have lost drivers from Europe. The government have recently issued 5000 temporary visas in an attempt to bring back European drivers to help with the crisis. They also have the army on standby. 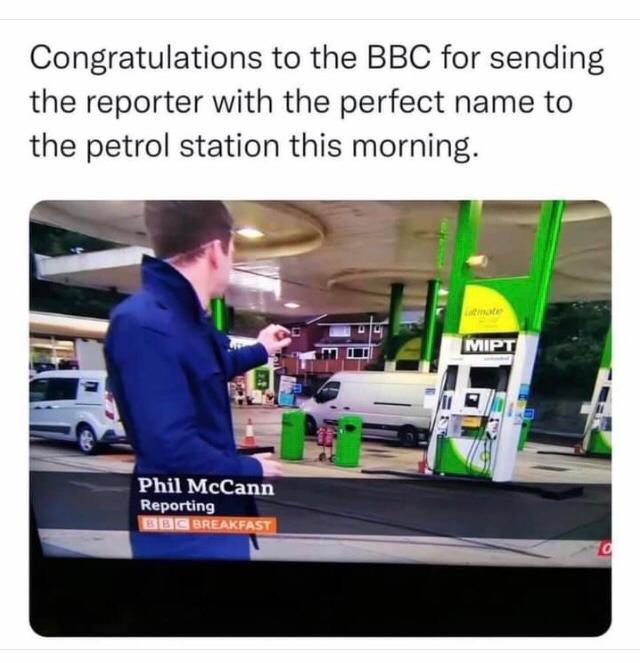 Dave Dillbury, a manager from a haulage company in the northwest said, “People are blaming Brexit as you’d expect and I saw that German tosser from the European Union on TV the other day saying, ‘Wie told you so’ but this shortage has been going on for years.

Another large truck company reported a loss of drivers due to the pandemic. “Lots of people got furloughed in lockdown which has made them not want to come back to work,” Ian from Truckability said. “My mate Rob and his missus started their own eBay business with the dosh they’d saved and now he’s minting it in selling crocheted effigies.”

Queues of traffic lining up for fuel have caused severe delays on roads across Britain resulting in fistfights and road rage. One angry couple were seen hurling abuse at a pensioner sat in his car because he was blocking the entrance to KFC. “These doddery old gits don’t need to go out, but we’ve got a family of five to feed!” said the outraged pair. Another man said he had been waiting in the queue for two hours only to get turned away when he was four cars out because the pumps were empty. 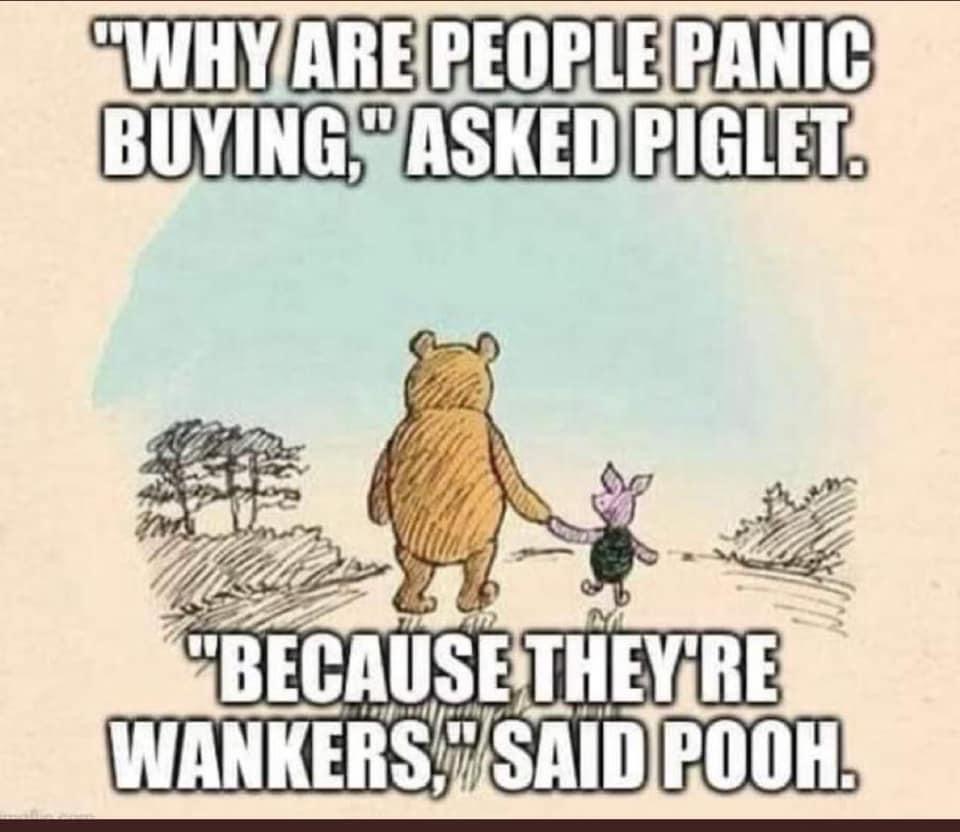 Many workers are taking to social media to report their frustration. Taxi drivers are losing money, health workers can’t get into hospitals and care homes, and an irate chiropodist blew his top on Facebook earlier stating,”I was supposed to visit a woman with bunions this morning but didn’t have enough fuel to get there. Now I’m out of pocket and that poor woman isn’t going to be able to walk the shops, is she? – It’s outrageous!”

Fuel-station managers have spoken up saying, “Prepare for it to get worse – We are already having to cap the amount of fuel that people buy if they’re lucky to get some, and soon we will have to prioritise medical staff and emergency services.” When asked why the prices have suddenly risen to £2.08 per litre when the problem isn’t actually a shortage of fuel, one manager from Kwik-Fill said, “Some say it’s profiteering but I see it as entrepreneurial. You gotta fill your boots when you can.”

When speaking to forecourt attendants across the nation evidence of sheer lunacy seems to be in play. Neville Green, a cashier at Esso said, “I’ve only been doing this job for 5 weeks and I think I’ve seen it all. One bird started filling up plastic carrier bags and putting them in her boot. Another bloke brought 20 fuel cans, and someone else came with a great big container on the back of his truck and started filling that up. I normally finish at 10 P.M. but today I finished at 4 P.M  cos there was nowt else to do. I’m just thankful I ride a mountain bike.“ 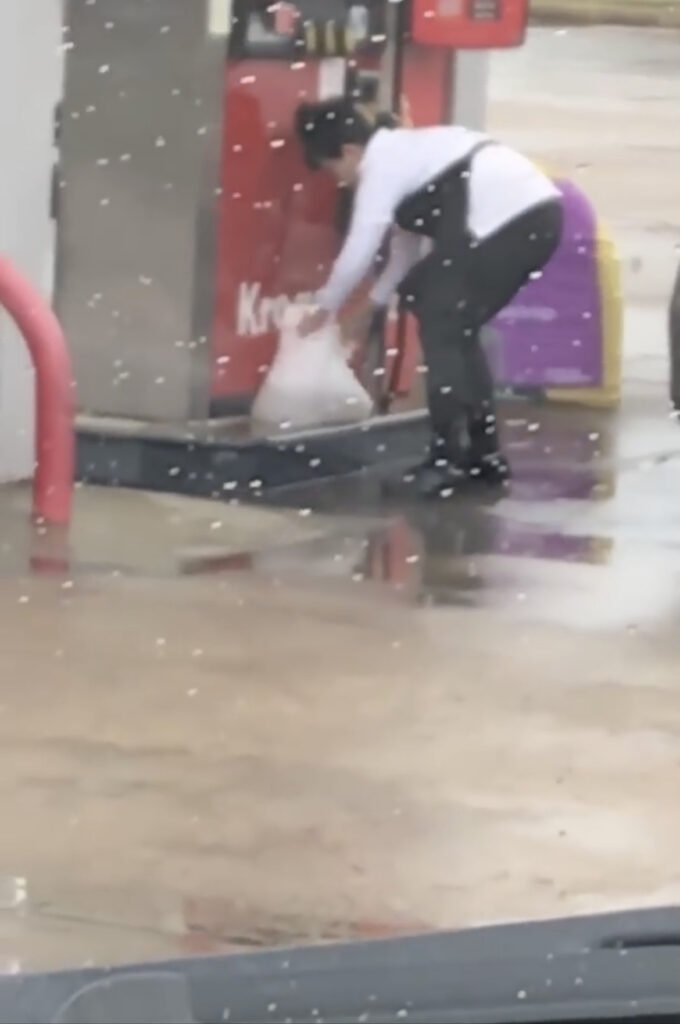 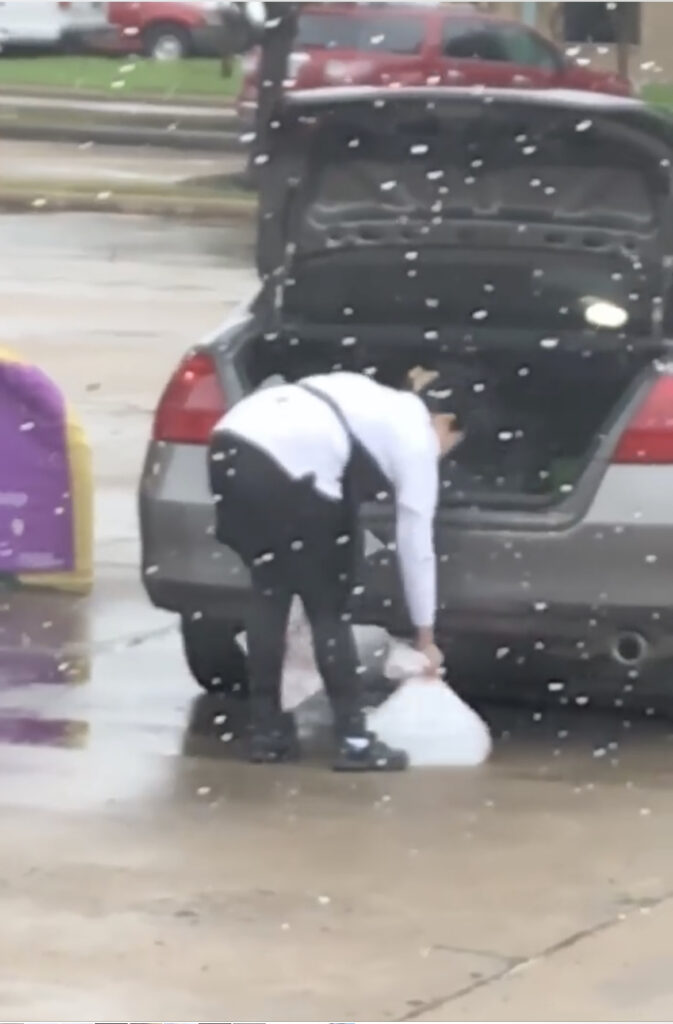 One unscrupulous woman got barred from Facebook for trying to sell ten litres of fuel for £50. She has now gone into hiding after severe online bullying and several death threats. 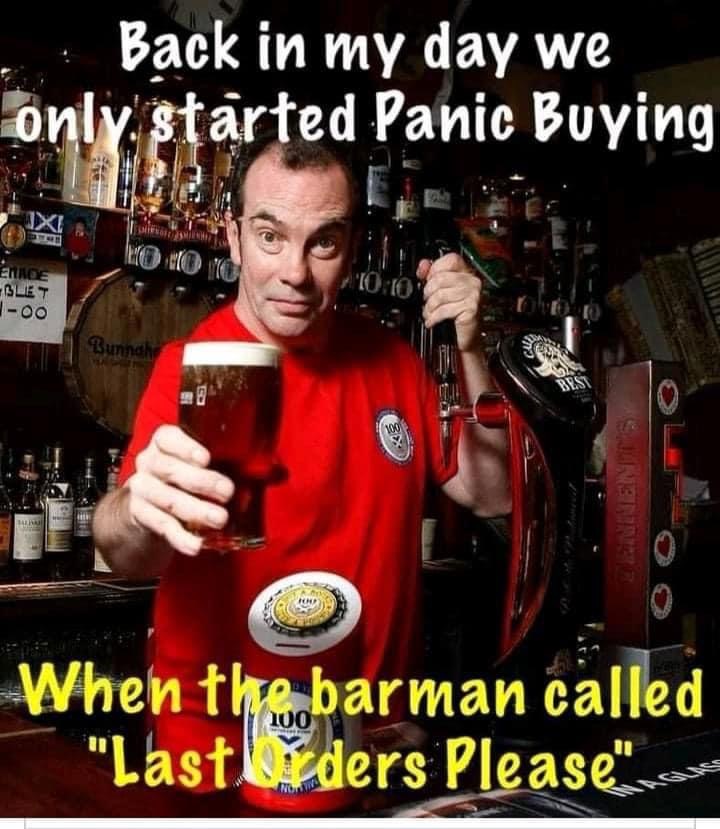 Who knows when this crisis will end? Fuel is just the start of it. Many of the supermarket giants are being left with empty shelves as drivers are a scarcity. “Even the drivers we had have left to do contract work,” Sonia from Sainsbury’s said. “They’re getting fifty grand a year with no late-night shifts or weekend work. They’re onto a pig’s back. I even thought about jacking in the deli-counter to get my HGV licence but my fella said it’s no job for a short-arse with alcohol dependency.” Asked if she thought the situation would get worse, she said, “Well, I’ve already stocked up on mince pies. I don’t know if I’ll get a turkey at this rate. This situation could totally ruin Christmas.” 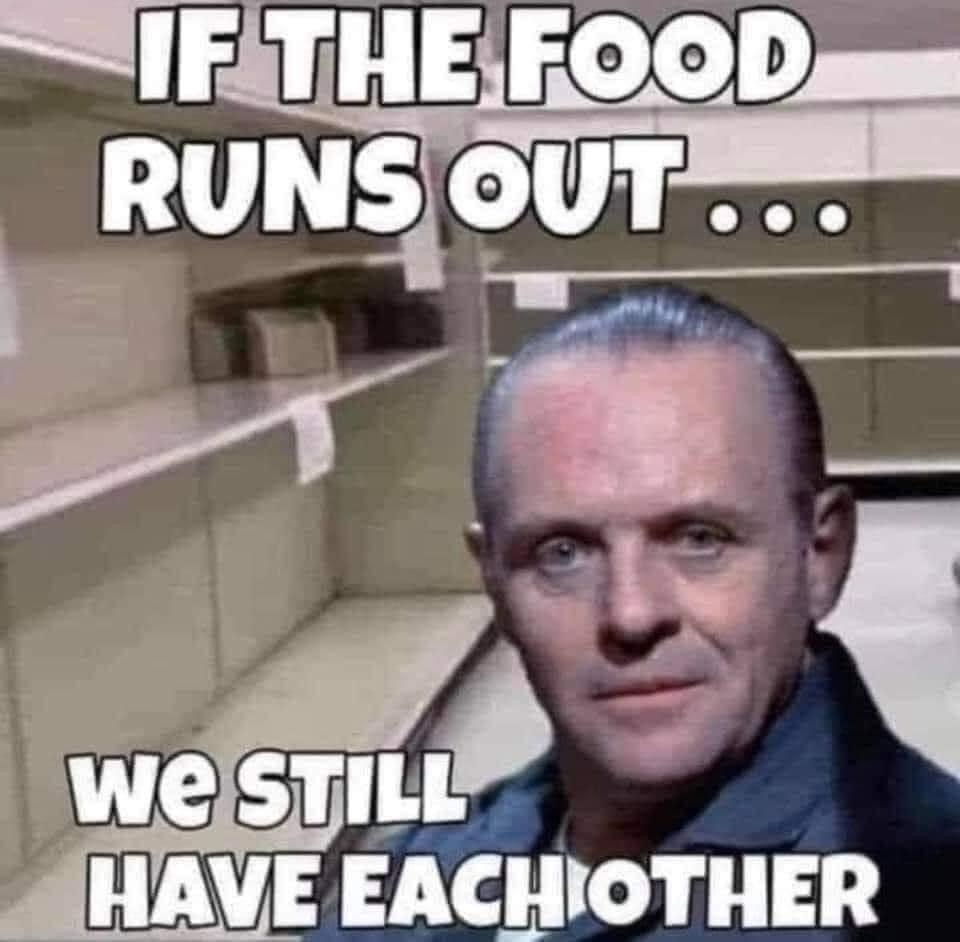 On a personal note, I’m biding my time with little choice since I only have 19 miles of fuel in my tank. I only have to turn a corner in my truck and that’ll be gone. My advice? Invest in a pair of walking boots and save money on your gym membership by putting your best foot forward.

There’s miles to go before you sleep.

How are sales of bicycles going?

I have a quarter of a tank, which isn’t much, but now that I work from home, it’ll probably last a good few weeks.
I just need to make sure there’s enough in there to get me to Hemel and back at the weekend, to see Mr Bond.

I’d be careful broadcasting news like that, Masher – you’re likely to have your car nicked!

Can’t wait to see it, and it must always be on the big screen.

Scandalous and disgraceful over-the-top scaremongering reporting by the BBC at the end of last week. All because a handful of garages didn’t get their deliveries dead on time. And of course the Beeb wouldn’t then run any reports of anyone blaming them would they now!

Right? It’s a disgrace. I think the BBC should be fined.
Mind you, when I heard them raving on about a possible fuel issue last week, I thought to myself, ‘well what a stupid thing to broadcast cos that’ll have the numpties out in their droves buying up fuel. But then again, maybe the public has learnt from the toilet paper debacle.’ Turns out people don’t learn anything and remain a bunch of greedy, selfish morons.

There is a theory that this was a deliberate ploy by the petroleum companies. The new clean petrol, which is more expensive than the old type, was due to be launched but not until they had used up stocks of the old type. What a clever way of emptying all those huge containers ready for the new deliveries

That wouldn’t surprise me in the least. The only people smiling are Tesla drivers. Let’s pray for a power cut!

Don’t mention power cuts to your Godparents. Uncle John has just bought a Volvo hybrid and is currently having a charging point connected to his house. How are they going to dispose of all the old batteries when there are only electric cars????? Not environmentally friendly

I won’t. He told me last time he’d definitely get an Aston Martin. I feel betrayed.

More landfill? Maybe Masher up above could use them for his radios so we could be sure to tune in to the next disaster. I’m seriously considering a simple life with the Amish people.

I would say ride a bike, but that is not fun in the winter. We have the same shortage of truck drivers going on here. It hasn’t caused a fuel shortage– yet. We are paying higher prices for gas though. My truck only gets 17 miles (27 km) a gallon (7.2 km per liter) it lasts me about a week.

Yeah, it’s not fun riding a bike in lashing rain and brutal wind. Wakes you up though!

I heard you have a similar food shortage.

Be thankful, your petrol is way cheaper than ours. We are currently paying around £9 – that’s $12 a gallon at the moment with the price hikes and that’s set to rise. Bloody ridiculous.

That about sums up the drama nicely!
Our main road got jammed up today as people on the other side of the road tried to cut into the 5 mile panic queue. Traffic stopped on both sides. Infuriating!

I’ve seen that. Why does somebody think it’s OK to cut into a queue of traffic that’s been patiently waiting for hours? How rude! No wonder there’s been fighting. People like that deserve a smack in the mouth.

Getting a little out of hand in the Sceptred Isle?
Be careful out there, seriously.
Here in the Texas Free State (TFS) everything is normal. Let’s thank God for that. Maybe you should move?

Place is bonkers, LSP. I mean, it always has been which is part of its attraction but this is off the scale.

Oh, how I’ve contemplated moving so many times. I love England, I do, she is part of my being. Of course, you understand that as you love her too. Plus I have friends and family here – that pulls at the heart. However, I have friends and people I consider family over there which also pulls at my heart. I miss America and Texas terribly and spend many hours nursing that hole inside. I am to be permanently tormented, it seems, and to be forever melancholy. I wish I could have been someone who is satisfied with that which lays before her, but no. I am the architect of my own ill-ease. How ironic that I sing my own country melody.

Still, there’s always margarita! But, always better on a porch.

Such melancholy! Which is heartmelting.
Then there’s TEXAS, which is awesome and not locked down. A Free State, if you like.
You’re clearly a citizen.
https://www.youtube.com/watch?v=jM8dCGIm6yc

Clearly. Well, that was AWESOME!

mah dahlin i’ll be right over. i ate all 3 of the new Wienerschnitzel hot dogs: the Cabo, the Aussie, and especially the Texas. AND the Pastrami Dog back for a limited time. that should be enough gas for Britain for 1000 years

I shall send Bond over immediately to collect you, my sweet. You will be heralded the new King of England! *)