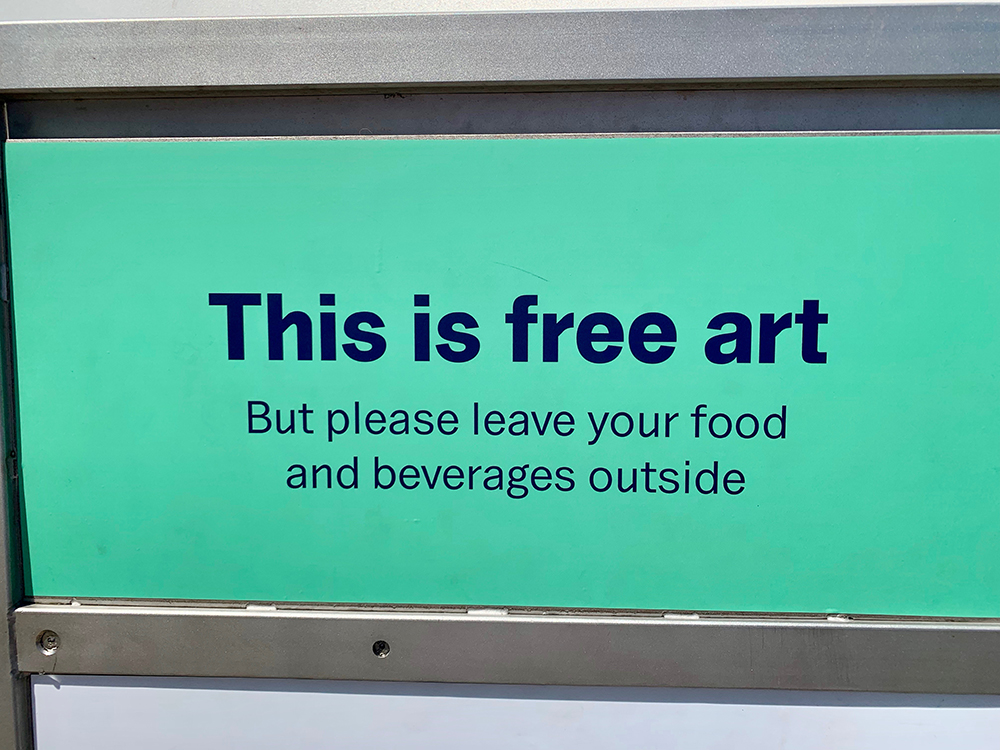 When I first arrived in wonderful, wonderful Copenhagen salty old queen of the sea, I bloody hated it.

Maybe it was the fact that I arrived on the dreariest of days that tainted my mood. Wet, cold, blustery, and greyer than the worst of English days. Ugh.

I had travelled light with just a rucksack to my name because I thought this would be a novel experience. Only two pairs of shoes and two outfits. I forgot to pack waterproofs, wellies, scarves, hats and furs.

I caught the metro from the airport to the centre of Copenhagen because I’d heard that Denmark was expensive. My hotel was a 25 minute walk from the centre, so I relented and got a cab from the central station because the rain fell relentlessly. That short ride cost just over £20.

Dearest mother, dearest father, here I am at bed bonanza

I arrived at the 4* hotel in the middle of nowhere and proceeded to the twin room. I dropped my sodden backpack on the floor and stared at my bed in disbelief.

Surely this was a joke?

I had not a bed but a bench. Not even a skinny child could sleep on such a thing. I sat on it and found it was also a trampoline. After I’d stopped wobbling,  I lay down carefully on the bouncy shelf.  The pillow, which was even smaller than the bed, was square in size and so deep that you could lick your own chest when your head was placed upon it. I wondered if this, in fact, was the Danish idea of the brace position for when you fell out of the thinnest bed known to mankind.

“I can’t bloody do this,” I said to my travelling companion. “Just watch this…”

I rolled over and fell straight to the floor.

As I lay, cold, damp, bruised and desperately upset on the floor, I noticed a little card placed just under the bed. I picked it up, intrigued at such a peculiar find.

“Well, can you believe this,” I said. “Here’s a nice little passive-aggressive note from the maids, who obviously know you’re going to fall out of your cot. It reads, ‘Yes! We even clean here!’

I tried to lift my spirits by drinking some.

Off I went to one of the in-house restaurants. It’s amazing how acidic a £15 small glass of wine can taste. Especially when you know you can buy a bottle of something far superior for under a tenner at Tesco.

I nearly had a breakdown.

In total despair, I went to have a chat with the front desk keepers.

“I can’t stay here,” I wailed. “Your beds are ridiculous. I might die in the night from a serious head injury.  I’m surprised I didn’t find body pieces of past guests on the floor. Ah!  This is why your maids clean under the bed, right? They’re not maids -they’re crime scene cleaners!”

“This is Danish way,” said the receptionist.

“This is supposed to be the happiest place on earth… I’m wet, cold, and miles from anything. I’ve spent a fortune on mediocre wine and can’t even afford to get pissed enough on that to render myself unconscious enough to stay still in my shelf bed. So, guess what? I’m really not a big fan of the Danish way.”

“Americans always have problem with bed.”

“The population of Lilliput would have a problem with your beds! And, I’m English! Where I live, single beds are at least 3ft wide!”

After a very awkward and tense conversation where burning down the hotel actually crossed my mind, I was offered a free upgrade the following day. In the meantime, I lay on my bench watching Danish TV and thinking like they sounded just like The Sims.  My depression was so great that I fell into a stress induced coma.

I can Cope – en hagen again!

I awoke to the sun streaming through the windows and wondered if it had all been a nasty dream.

Downstairs I rushed to find people jumping on pretty little bikes with baskets out into the sunny day.  I found that the hop-on-hop-off bus stopped right outside my hotel and for a mere £22 you could ride it for two days  thus cutting out all expenses and being dropped at every possible tourist attraction you could want to see.

All of a sudden, Copenhagen didn’t seem so bad. 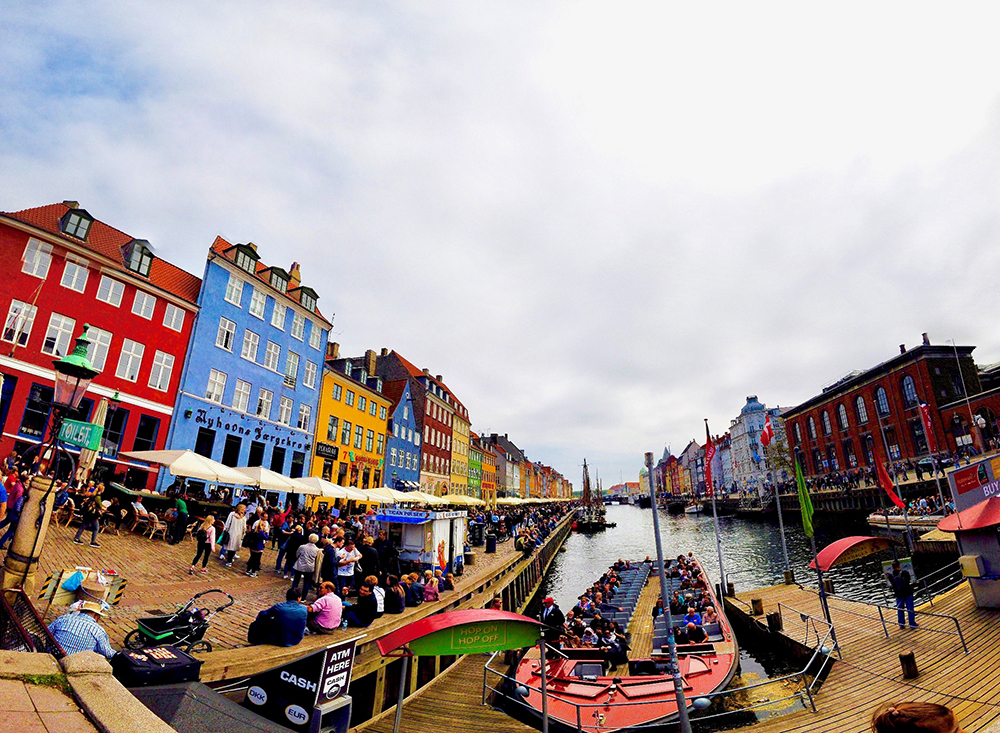 This is Nyhavn, meaning new harbour, even though it’s very old. How pretty is this place?

I adored it here. 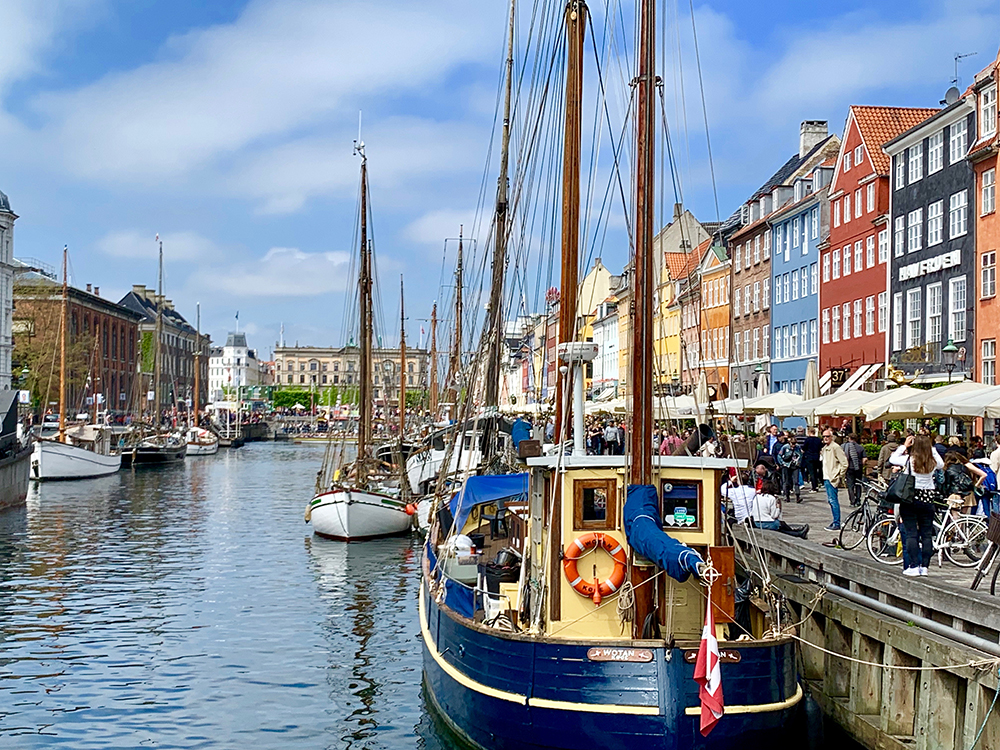 At the end of the canal there was a fabulous street-food market! Here I sampled the famous open sandwich known as Smørrebrød. Well, yeah, why would you put a lid on that?! 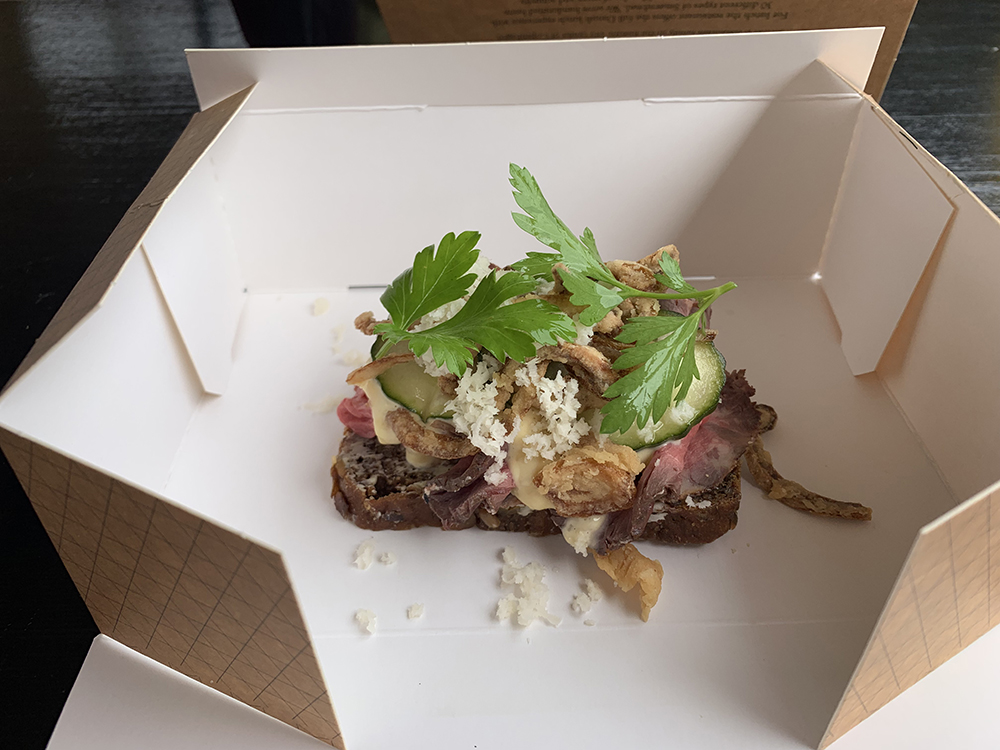 And here is where Hans Christian Anderson lived when he had his first fairytale published. 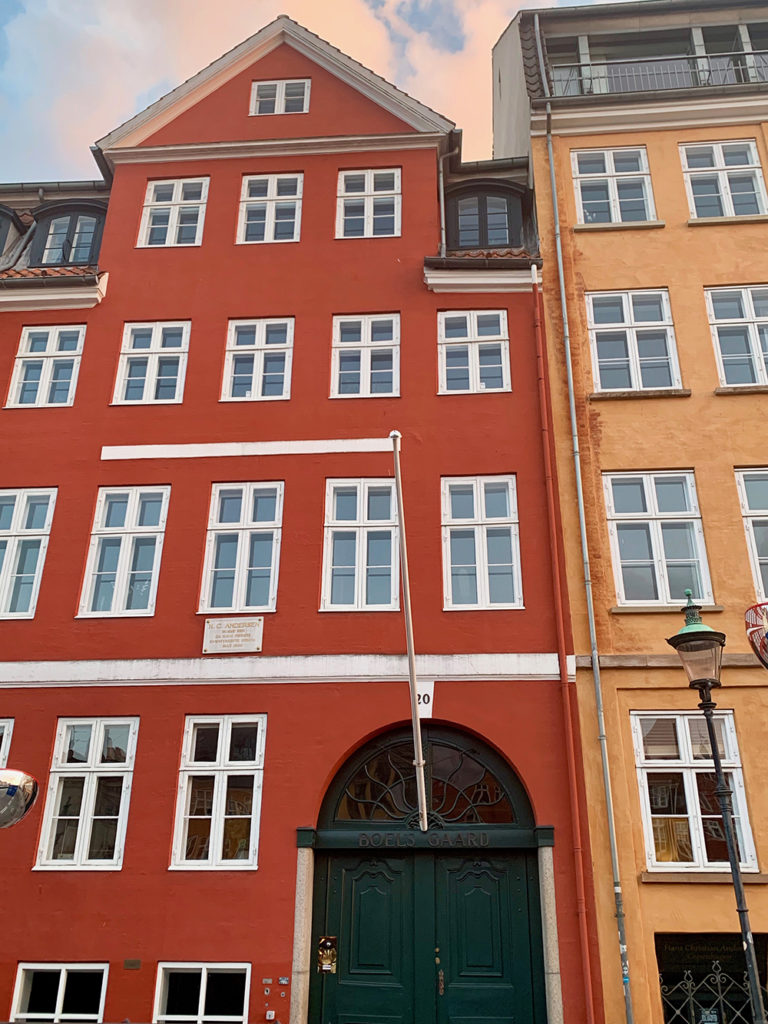 Remember The Little Mermaid?  I went to have a look at her. The tour guide said, “Here is the devastatingly unremarkable Little Mermaid.”  Just when I thought the Danes had no sense of humour.  Apparently, she has been painted red twice, had her arm cut off and her head severed. 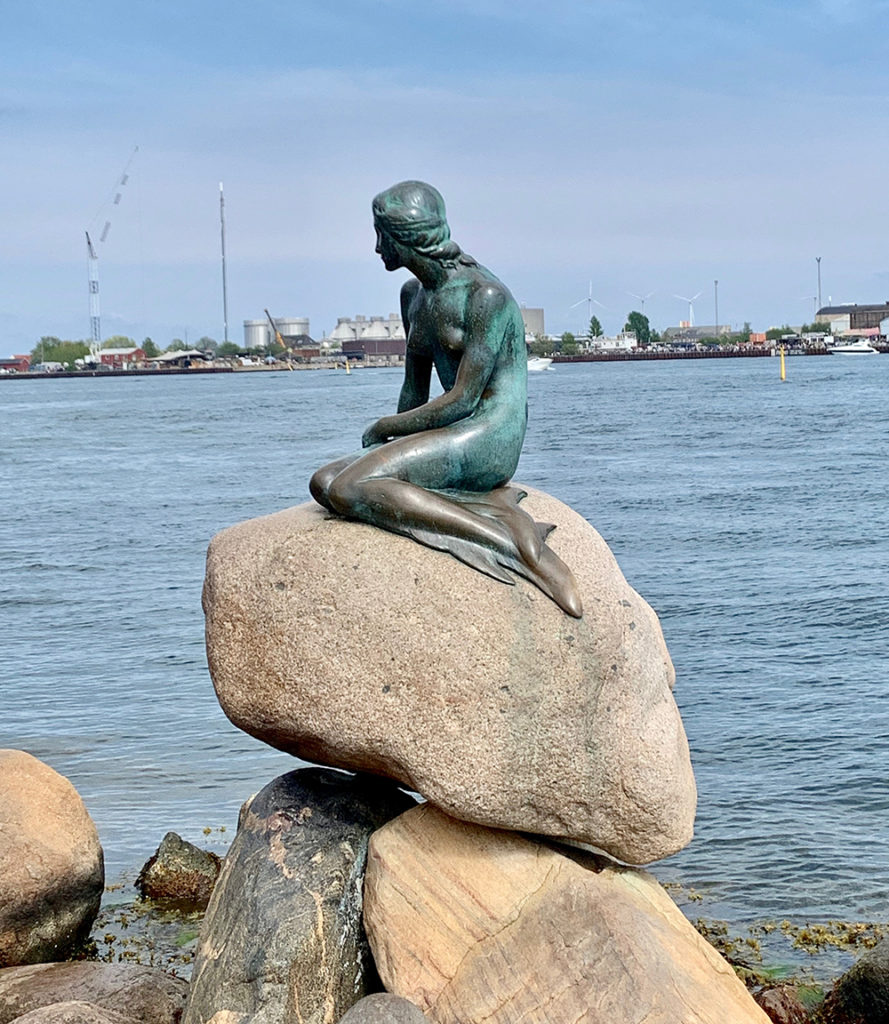 Copenhagen is expensive.  Double the cost of everything in Britain.  However, the food is organic and tasty , Nyhavn is charming, their way of life is green and sustainable. I’d recommend a visit as my trip ended up  with me getting a REAL bed and was really wonderful, wonderful, and actually, as you can see below,  quite a beautiful finish. 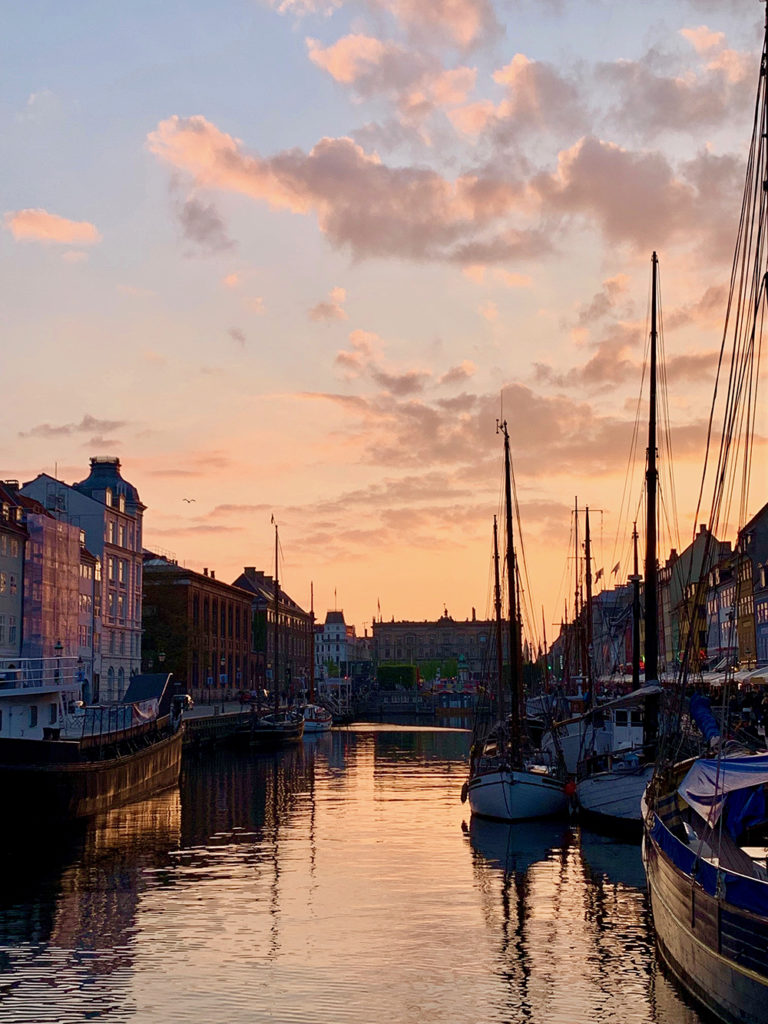 Good to see you having fun. Lol.

The reason Denmark is so expensive is that it is a “socialist workers paradise” where they tax EVERYTHING. The “happiest place on earth” is a myth and a clever marketing ploy. The reality is many Danes are on antidepressants, a very high suicide rate, and the disgustingly high tax rate is killing everyone else BUT they have “free” healthcare. Lol.

It is a pretty country. Too bad the Vikings surrendered their freedoms.

I had fun in the end, Nox! Once I sorted out the bed situation ther was a complete turnaround.

It is SO expensive. I think they earn more per hour than we do though so they can afford it.

The happiest place on earth… I think that all depends on what your concept of “happines” is. Mine is a large Margarita, a personal butler, a beach in Bora Bora, and a bacon sandwich. But then on other days it can just be a walk in nature far away from human beings.

How much more would it have cost to have booked a five star hotel downtown?

I hope that you wore your emergency clown nose when you went to complain?

Tons more! Seriously, LL, I wondered if there was some world famous event going on when I looked at hotel prices!

It all worked out in the end. However, had I put my clown nose on I might’ve got the penthouse suite. Lesson learned!

It sure looks beautiful and clean. And as for that mermaid…. it must have been nippy when you took that picture. Pun 100% intended.

Hello Blue!
It’s very pretty in Nyhavn – that’s the best place. I like the idea of being able to bike everywhere and eat healthy but tasty food. I didn’t like the price of wine though!

at this very moment, the Trivago Guy and I are waiting for you in bed at a bed ‘n’ breakfast in Middelfart…

Oh my God – I am Homer Simpson!

I used to work with a Dane, and was amazed when he told me about the incredibly high tax and the caste system they have over there.
Nice flag though.

Glad you had a nice visit to Copenhagen.
The photos are tempting, but I think it’s wise for me to stay on my own patch so long as you-know-who lives there. I suspect that she also finds having 5800+ km between us comforting. (And speaking of expense, pretty sure I no longer have an open offer of a place to stay in Copenhagen — not that I’m bitter or anything 😉

Oh YES! No Copenhagen for you, mister! Not without bodyguards. Maybe the wolf and I!

You could always sleep wrapped up in a flag. After several Calsbergs, I’ve heard it’s a better night’s kip than on a Danish bed.

All you dangnabbed writer people are alike….usin’ that durned ‘click-bait’ stuff.
I knowed you wuz partial to Texans and Bubbas, and ya bought yerself a brand-spankin’ new truck the size of Danish bordello, so natural-like, I figgered it was about this here Copenhagen….
https://youtu.be/dXmRmpzJBFw
I wuz just a bit disappointed, but your stuff was purty good anyhow.
Luv Ya,
~PPS

I’m all about the “Click-Bait’, Bubba! Anything to tempt you in….

Eww… no. The only dip I’m doing is the one at the end of my pretzel or crisp. And that other one that you can only talk about after watershed 😉

Wait till you see what I done with ma big truck! 😉

See how much you get from me, PPS? When am I getting paid for this growth in your culture? ( eww… that sounds a bit dodgy…)

It is said that there two things you can depend on: death and taxes. But I rather think that a more eloquent and lovely third addition would be the graceful mind that pours out from Juju’s pen. I wish you wrote everyday, Juju.

I think we need to assimilate the virtues of each country by their own standard, not the standard of our own country. As an American, I would disapprove of a tax base of 50% and I prefer to earn my health care than have it provided by the state; however, this simple preference doesn’t preclude the opposite working in another place. It’s just not the American way (yet).

Juju, thank you once again for a humorous jaunt across the landscape of your unique perceptions. If I could I would provide you with more story material so I could be tickled by your pen as often as possible.

So it is said, Dean. My, my, you can come again! Such lovely compliments! Thank you!

I couldn’t cope with Denmark’s taxes but, as a Brit, I am used to free healthcare and generally being ripped off! Still, I found food prices in America much more expensive than Blighty of late so maybe not? However, you’re a WAY off Denmark!
They get it off you somehow.

What was it Rex Harrison said while he was playing Julius Caesar? “My remaining ambition is to keep the world from conquering me!” In like vein, I know that my country will get its pound of flesh from me. My sole remaining goal is to be the arbiter of what part (and when) of my body that pound of flesh is extracted. 😂