All Rhodes Lead To Genoa 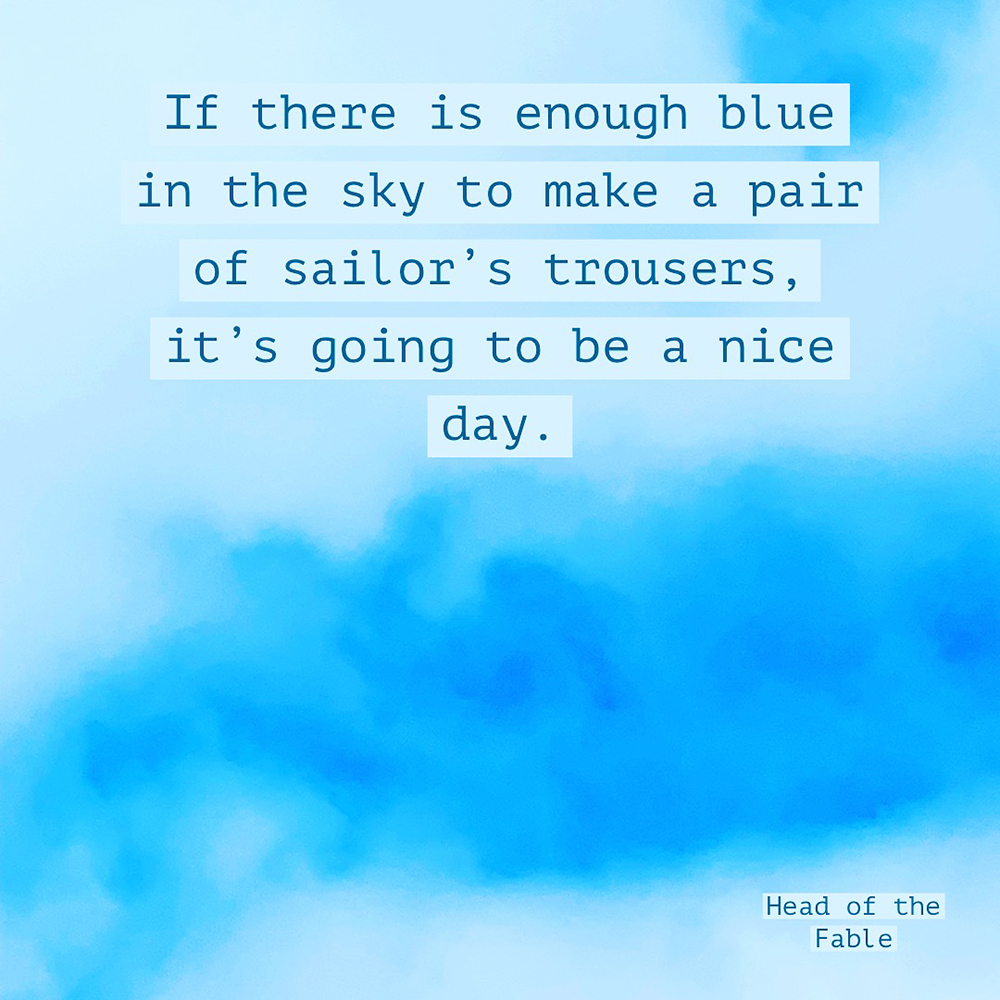 You might have noticed I’ve been away. And you’d be right.  It might serve you to pay attention when I go on holiday as I have a canny knack of picking just the right time.

My first trip was a top secret, extremely last minute get-away to Rhodes in Greece. Timely to the point of divine wisdom because as I left on a rainy day to a glorious 30 C balmy island, England turned into a river of hell and non-stop rain den.  There were floods everywhere and not a drop to drink.  Needless to say, everyone despised me. 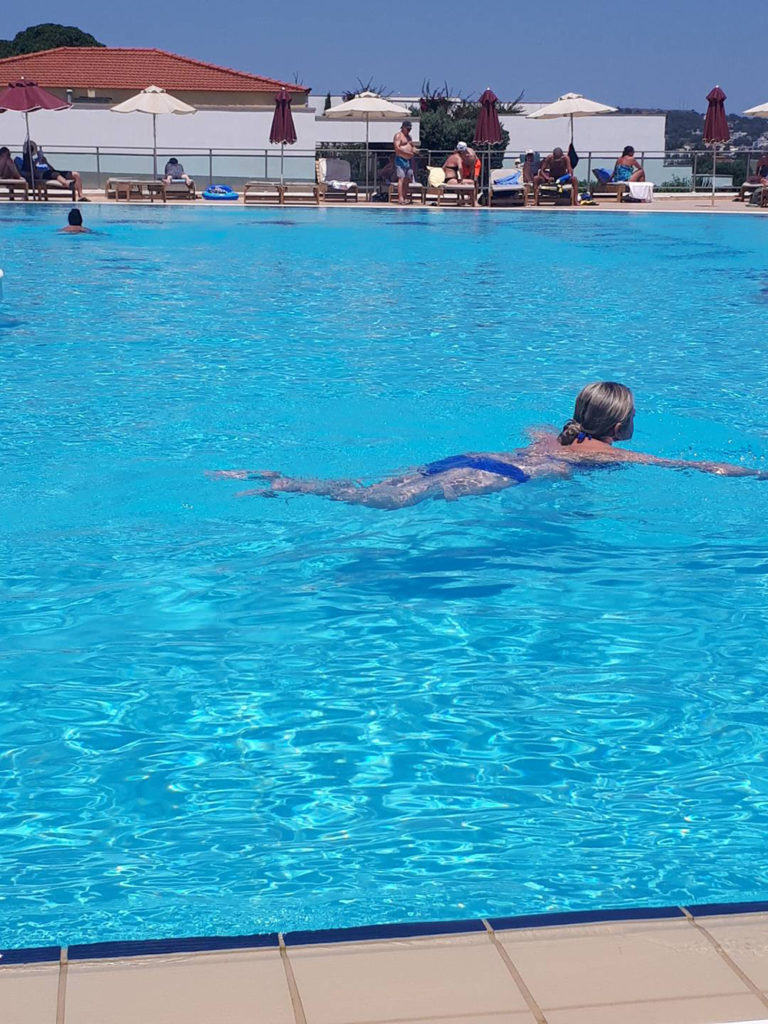 Which was tough.  And actually, my hotel was hard going.  Upstairs to the pool – up more stairs to the other pool. Downstairs to the beach, downstairs to the dining area. Up and down stairs more times than I’ve trodden a stair in all my life.  It took me three whole days to figure out that if I was going up and down stairs all the time that there had to be a non-stair route in the middle.  By which time my calf muscles had decided to knot into balls of steel and threaten to snap when going down the slightest of slopes.  When the Greek guy who drives the golf cart around the premises asks if you need a lift 100 yards away it’s safe to say that other guests have noticed your sluggish gait and whimpers. 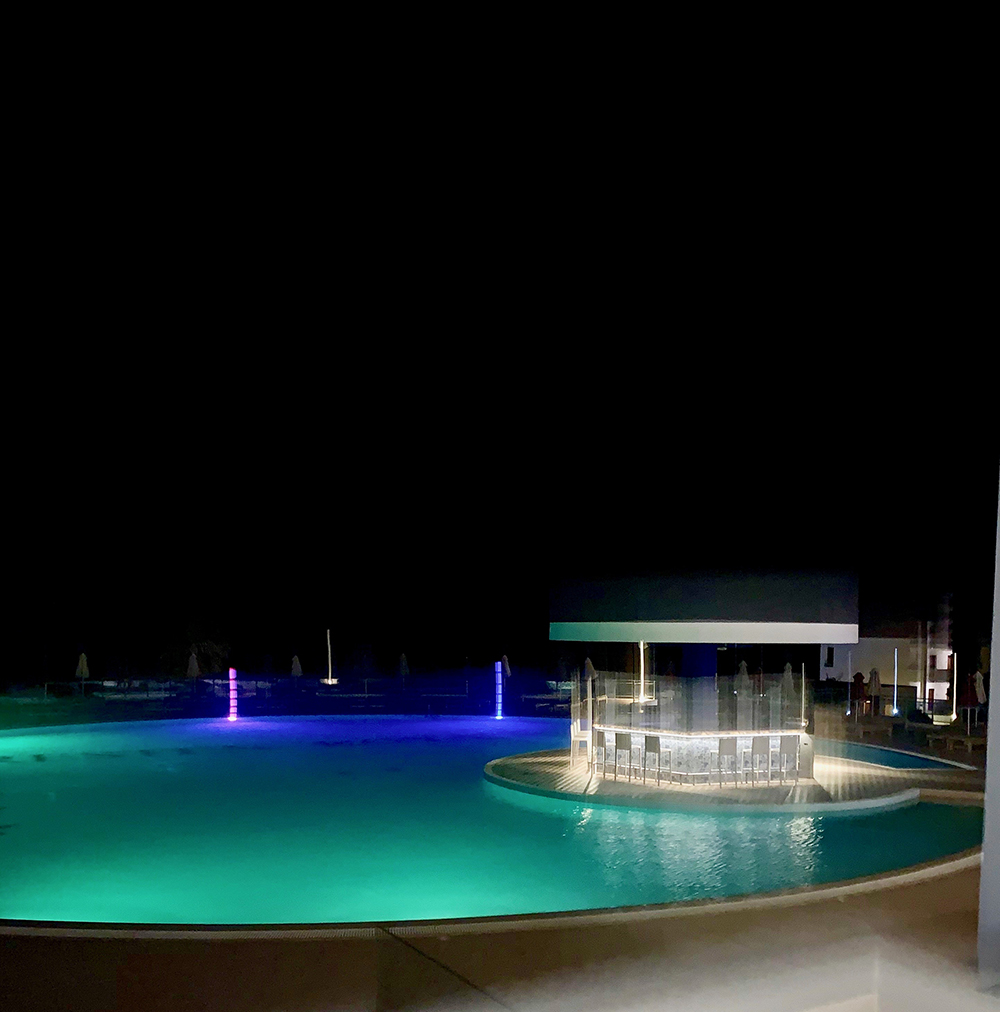 Still, the waiter at the pool bar served up a spectacular antidote… 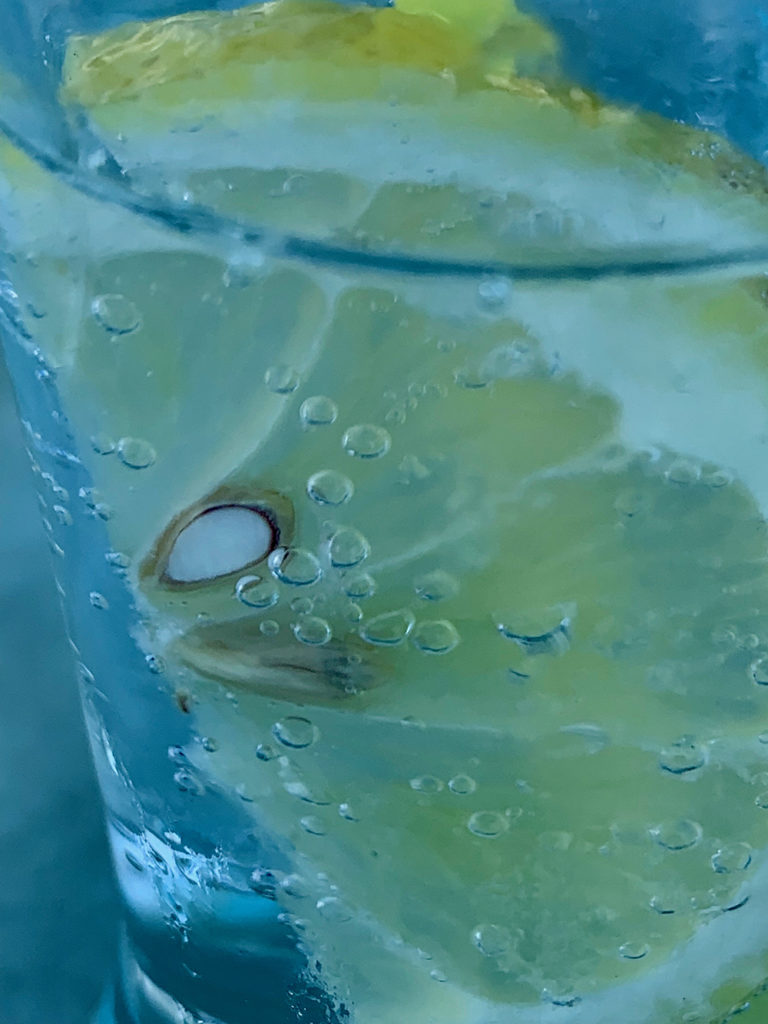 Despite this being all-inclusive, let’s buy it on the cheap cos the English are holidaying here, gin and tonic, I have to say that the sun and salty breeze made it taste out of this world.  So much so, I have returned with a new found desire for un-named liquor brands sold at Lidl mixed with inferior tonic.  Greece has a way of erasing the snobbery.

But when this is your view, how can it not? 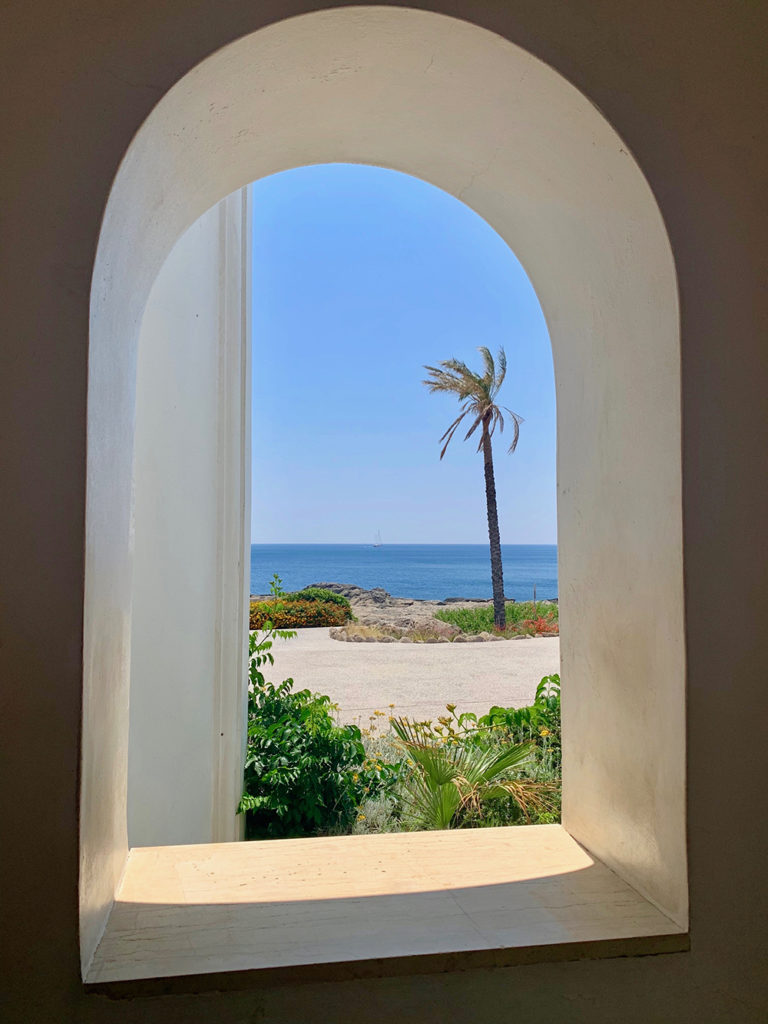 I found a beautiful bay down the road at Kalithea Springs: perfect snorkelling, an elevated, horizontal bed, a vista, and butlers on tap providing Feta and Fanta within 17 minutes of a finger click. 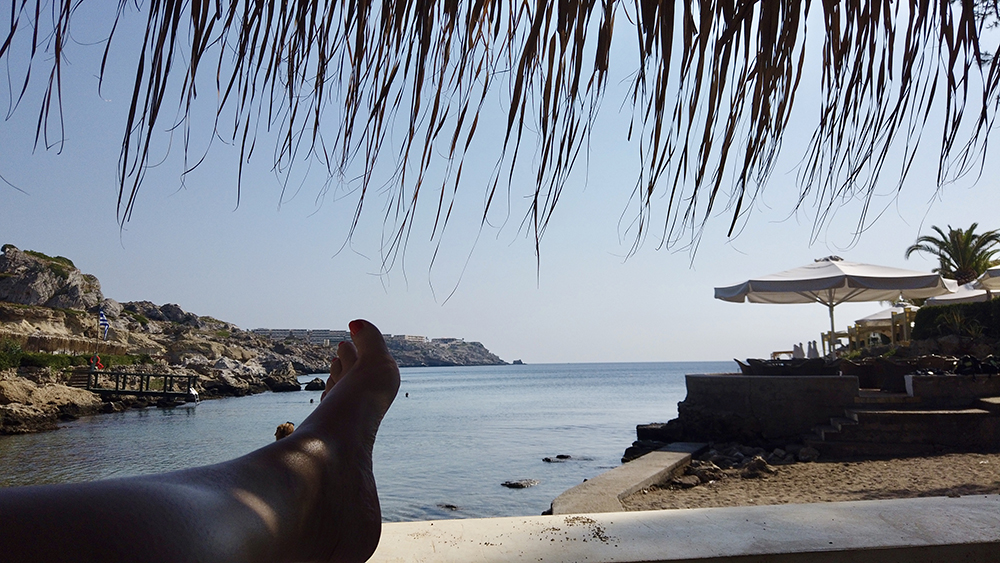 But there comes a point when you need to get your hat on and out into the thick of it all. 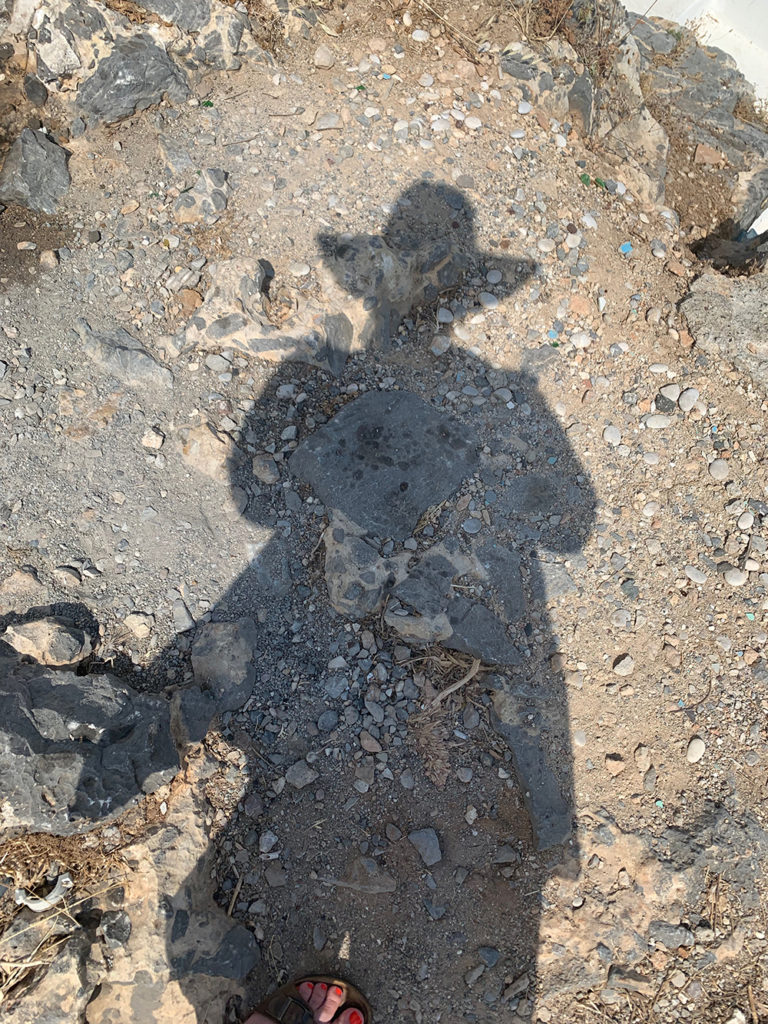 I decided to descend on Lindos which is a beautiful and typical Greek fishing village. Like a true Knight I set out to see the Temple of Athena Lindia until I realised that 10,000 other people had too. 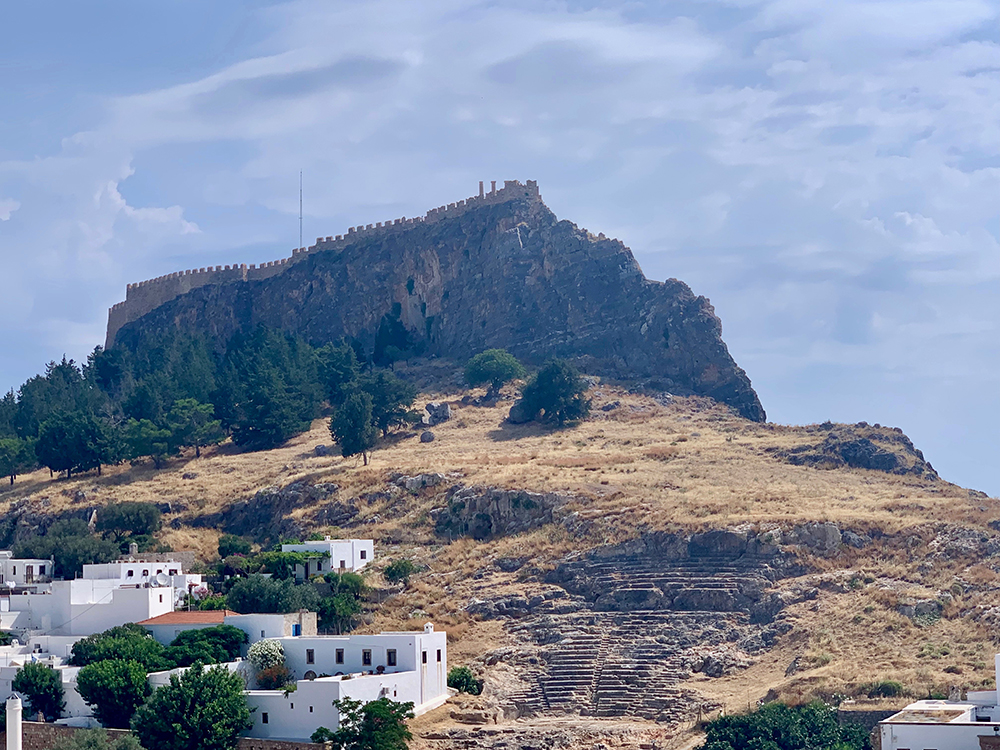 The heat was searing down and as I looked up the great mountainous walk to the Acropolis I spotted someone puking about halfway up and decided to give it a miss. Fortunately, I’ve been here before so bailing out didn’t seem so bad.  At the end of the day, the beauty and history of Lindos is not something you want to share with excessive crowds whilst boiling to death.  The whole essence of the place is spoiled by this along with the need for Greeks to open up a “Mikey’s English Food Bar” to attract tourists. I come on holiday to escape such things.  However, I walked the back streets and managed to avoid the madding crowd. 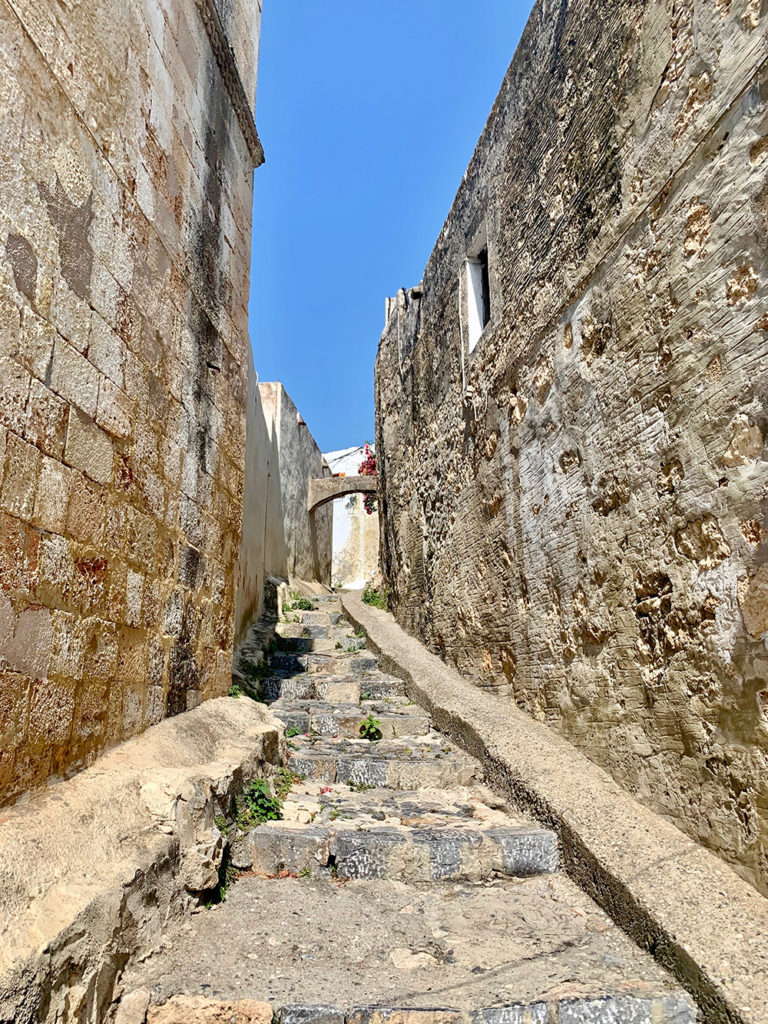 But much better cafes… 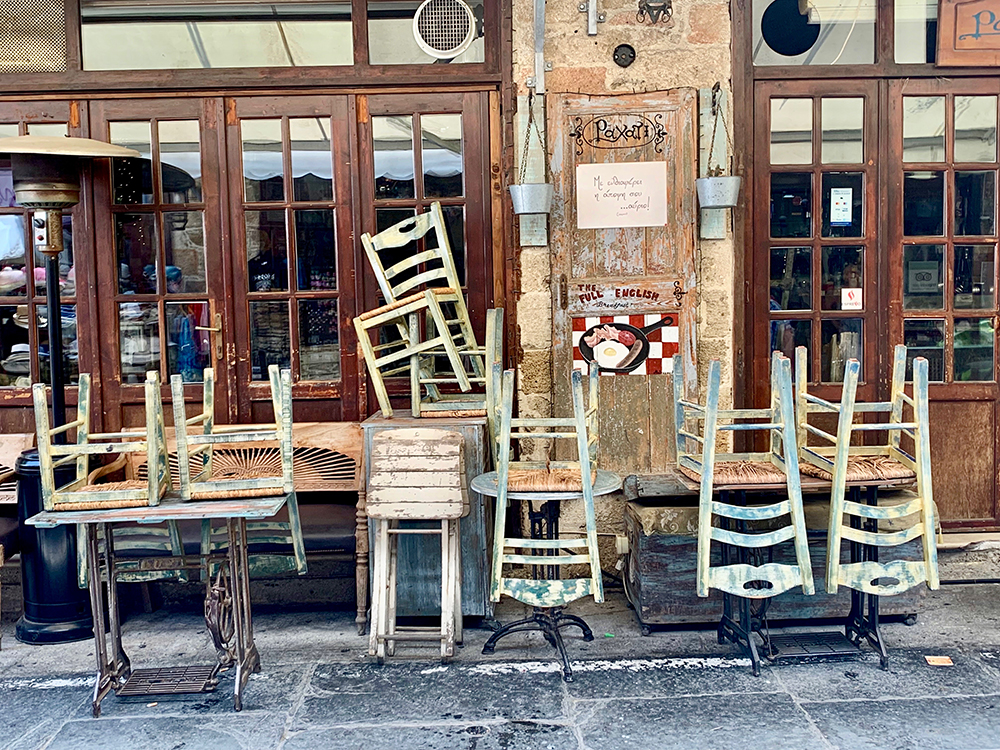 And a delectable door or two… 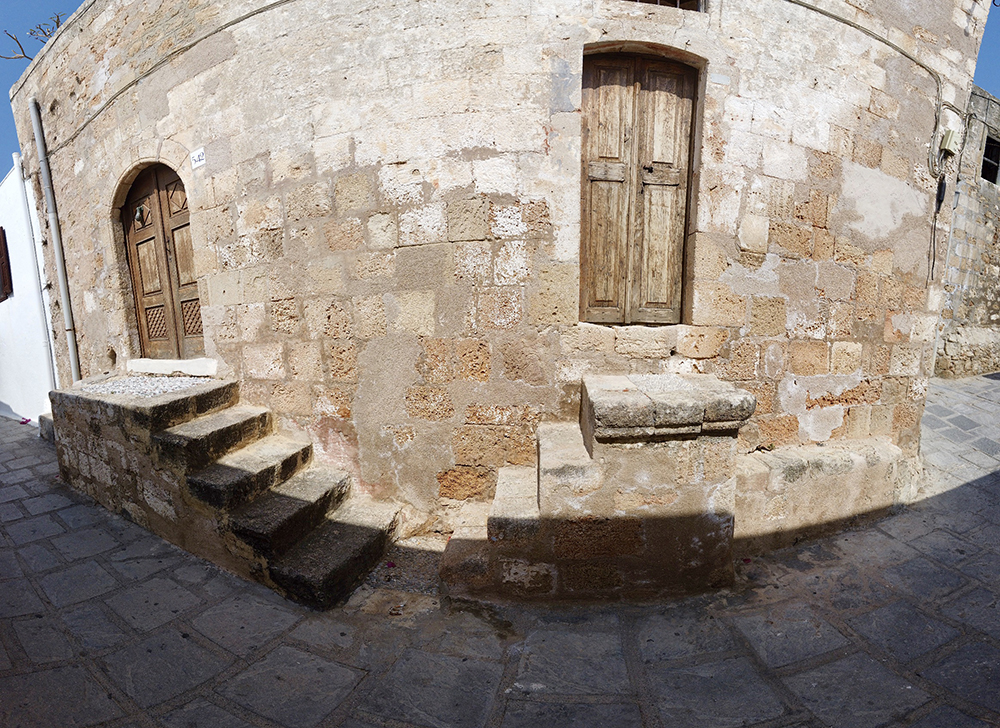 I’ve discovered all the things I love about life by extensive travelling but not in the way I thought I might.  It is by finding what I do not like that I have truly uncovered what I yearn for to calm body and soul. 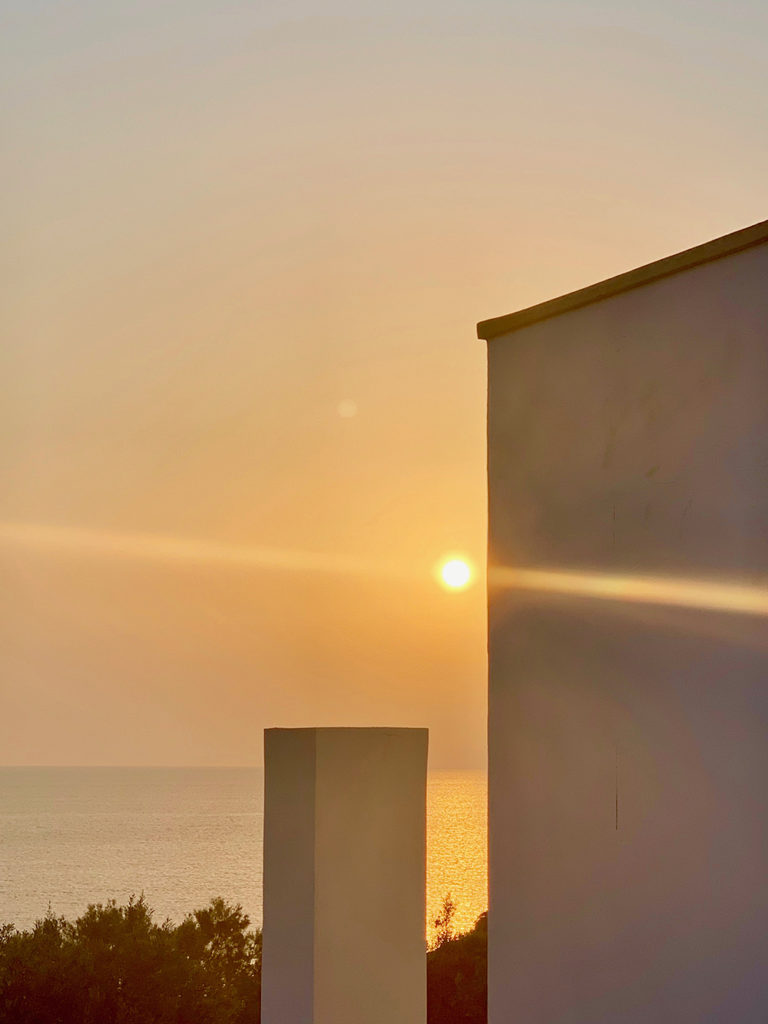 Keeping it simple is what works for me and if you can manage to lose yourself in a Greek island, it’s almost perfect.

However, no time for that because I had to move on to the…

Bags unpacked, clobber washed, and back on the plane to Genoa.  The capital of Liguria. 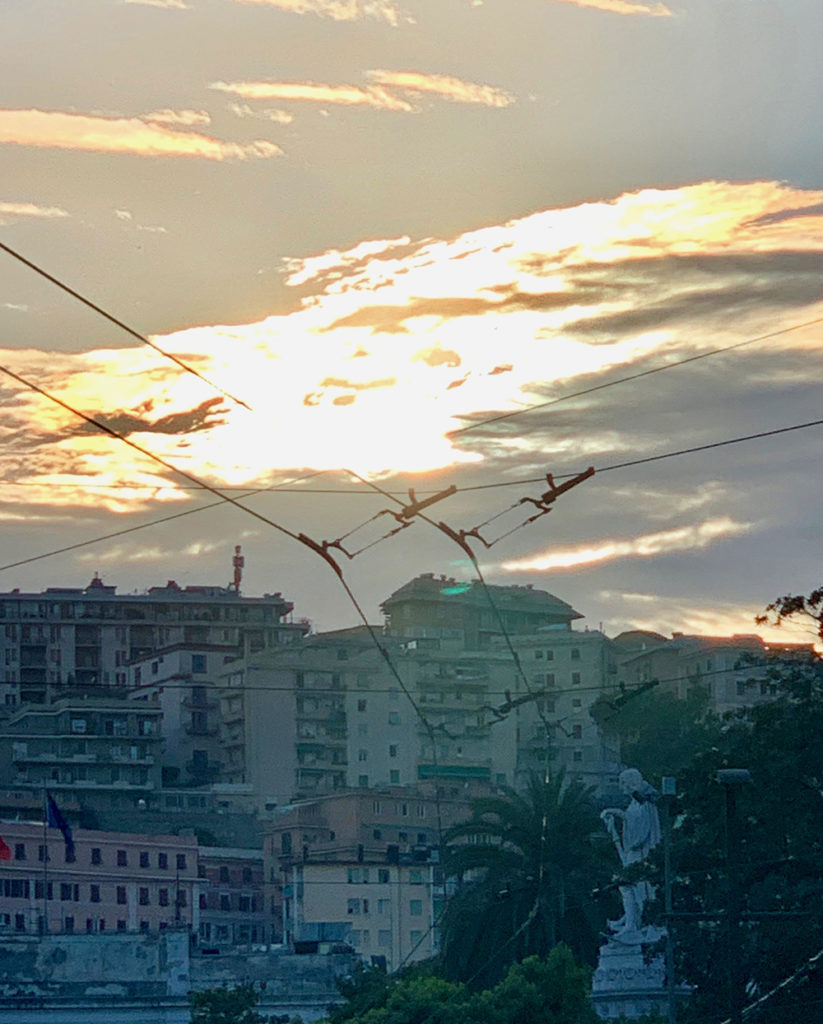 Italy is one of my favourite places and Liguria in particular as I spent 3 months there back in my early 20’s.  I spoke wonderful Italian, hardly spent a penny, and ended up meeting a Mafia gang and bringing them back to England.  I must blog that story – it’s fabulous!

Anyway, what I particularly love about Italy is the food, the wine, the passion, and the go-slow tempo against a dramatic backdrop. 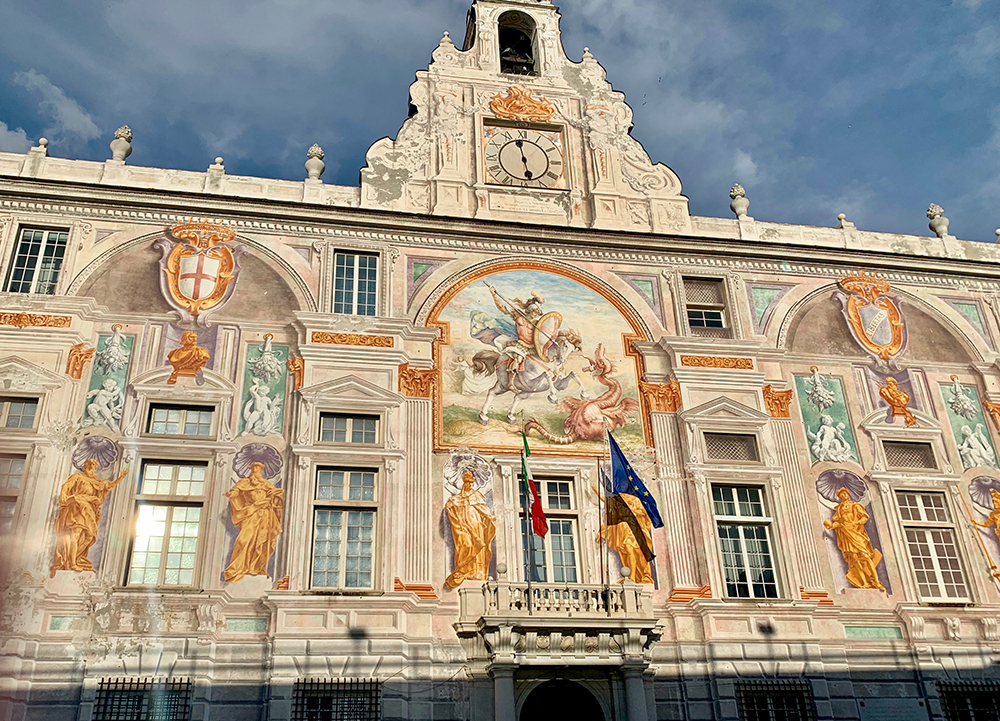 The best MacDonalds I’ve ever been inside was in Rome.  The building could rival the Trevi Fountain with its flamboyance! 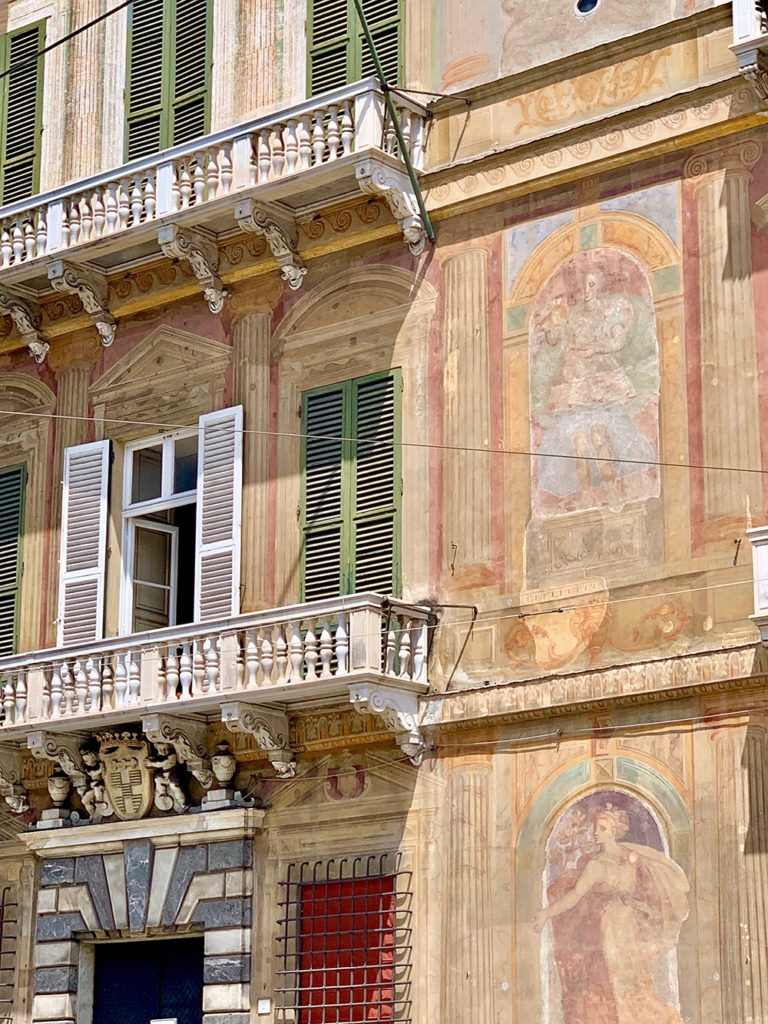 I walked the dusty, cobbled streets in search of Bardolino and espresso, pasta and prosciutto and whatever Genoa had to offer.  Which, on the first night was utterly atrocious.

Having stopped at a random cafe type restaurant that looked pretty nice, I found that I’d eaten better ravioli out of a smart-price tin at Asda.  The waitress was a surly bint with a severe hatred for tourists and had the audacity to bring me cold red wine.  In Italy.  That’s when I lost my shit.

“No.  I cannot possibly drink this,”  I stated – all snobbery back in full play.

“You want it caldo?”

“No, I want it room temperature. It should complement the warm breeze of the evening.”

Wow. Where am I? Grimsby? I swear to God I nearly slapped her.

Fortunately, all righted itself and the next few days found me eating local dishes in beautiful places,  such as gnocchi pesto and focaccia for which Genoa is famous. 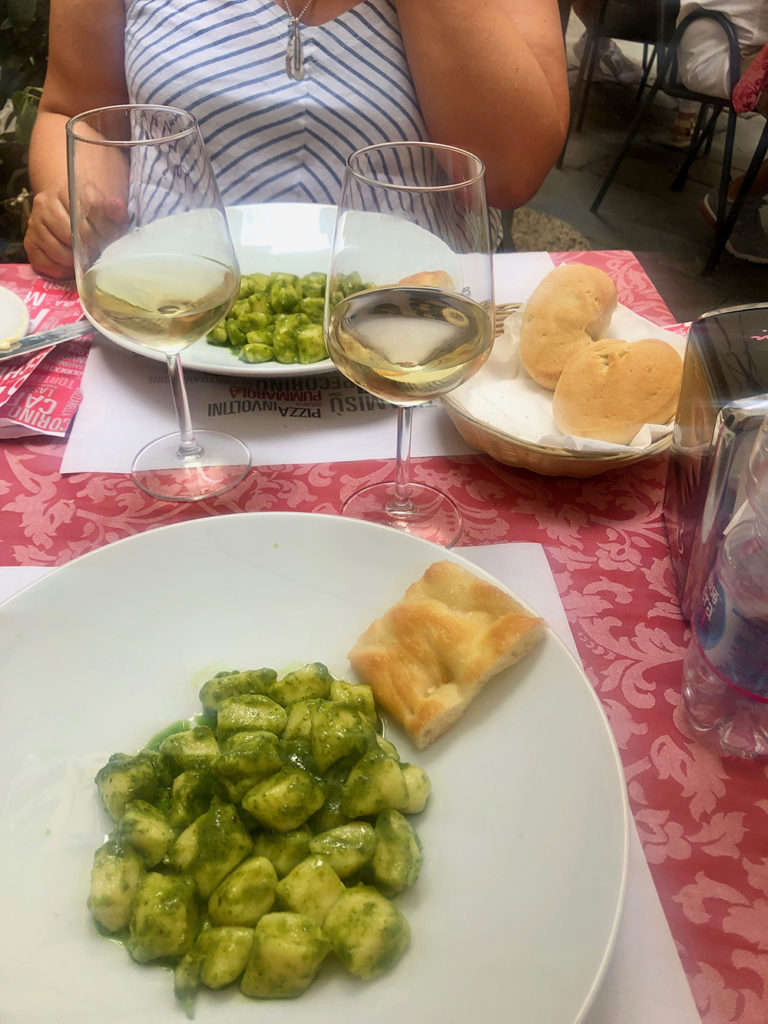 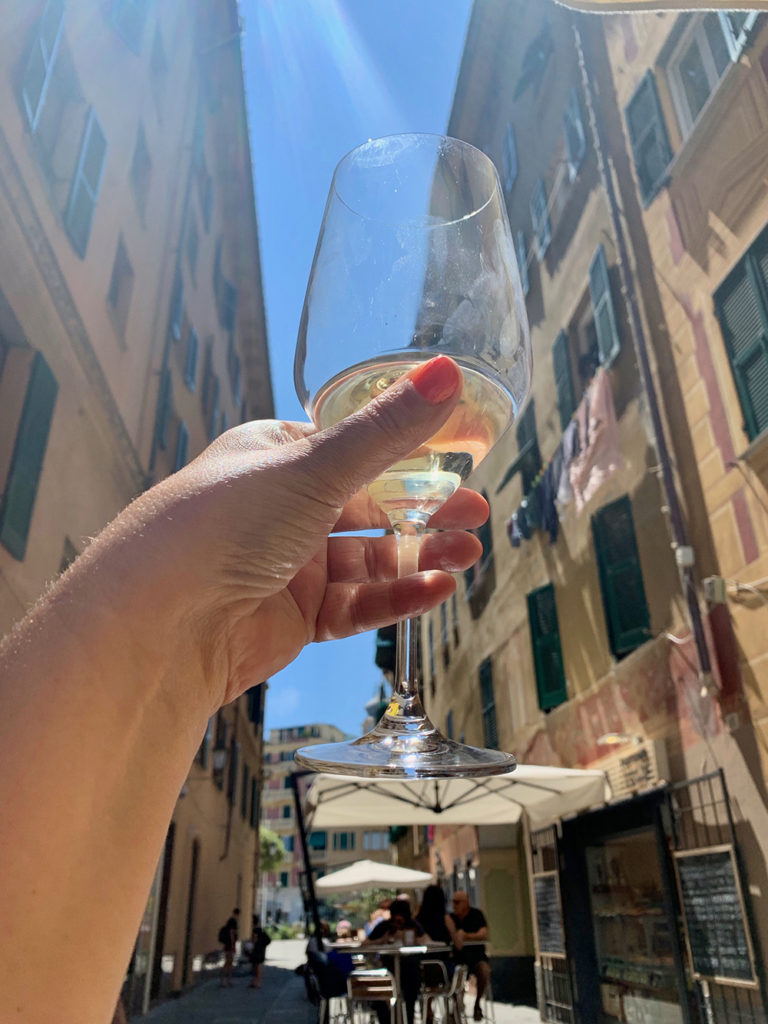 After a few hard-heeled days of scouting out the city, I took a train to Santa Margherita / Portofino for a day of seaside swag and sophistication. Pretty, idyllic, and very expensive. 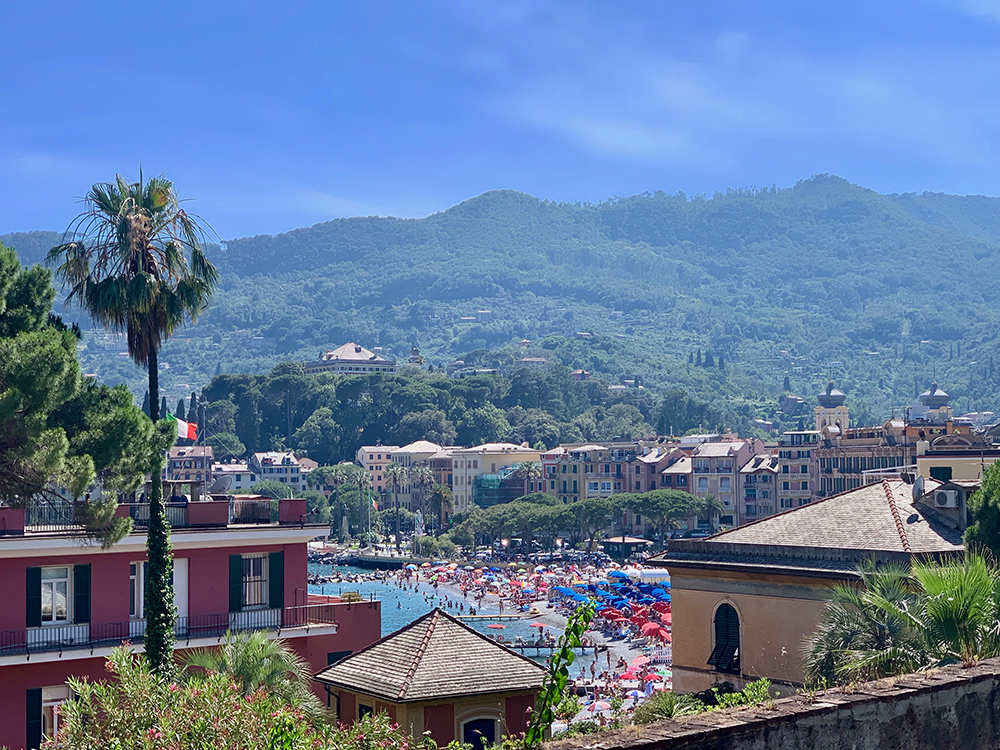 As you can see, everyone else in Genoa had pretty much the same idea except they weren’t stupid enough to forget to bring a towel and have to pay a gazillion Euro for a sun-bed and a rag. But it’s still not as expensive as Copenhagen. That is going to take some beating.

Lovely place Lindos, cakes not so 😂
One of our 1st happy memories bff❤️

One of many, my friend!

Yes, it’s true – everyone wants to be you.

Stone me! Still giving Alan Whicker a run for his money, I see.

Smashed Chalmers – now about to waste Whicker! When am I gonna get a TV show?

A City a month makes great travelogue stories. You really must write the mafia brothers story it’s very funny looking back but I wouldn’t like to live it again. Still it was one of your “annual events “ !!

I’m kinda liking it, though it can be tiring (yeah, poor me) I feel like I’m living in an airport! Time for some Blighty Tramping next! After Vienna. 😉

I can’t believe I’ve never thought of writing it up! Probably didn’t want people to think I was bonkers.

* I always knew you were secretly a Greek Goddess who lived on Mount Olympus. which one is the goddess of beauty but also the one who kicks arse with and shoos away wild boars off her lawn with the Golden Bow N Arrow?

* always watch your back when you’re in a hot springs, that’s the first thing you learn when you start watching anime…

* always walk up a stone staircase, it’s been there in stone for thousands of years for a reason…

* my Italian Job: reconnect with Lucio Rossi, my best friend since K from Catholic school

* Michelangelo painted the inside roof of that Rome McDonald’s. times get tough for an artist…

* did you run into that bearded Perillo Tours guy in Italy? those are the only tours offered in Italy, Perillo is Trivago Guy’s Uncle Sal. did you know Perillo also does Hawaii?

Thank you, my sweet, for recognising my Goddess status. It’s about time someone did! You may call me Abeona.

You are welcome at any time but be prepared to take up cabana boy duties instantly. I don’t pick my own grapes.

Perillo now spends his time with Luigi driving a golf cart at Bowser castle. He eats at a salubrious MacDonalds and spends his leisure time painting by numbers in a Michelangelo book.

I’ve been to Hawaii. I got myself into a right Humuhumunukunukuapua’a. *)

Humuhumunukunukuapua’a is Hawaiian pizza if you know what I mean…*)

Oh to be you Julesy.
Better yet…to be there with you Julesy.
Have fun My Friend.
Love You,
~PPS

Ah, the grass is always greener where I tread, my PPS!

Wanna carry my rucksack? Put up my tramping tent? I’m about to start interviews if you care to send me your CV 😉

Oh, Juju. I fret and fear for the Italian culture. Cold red? I would have collapsed in apoplexy. Afterward, I would have gone into full blown Napa, California wine snobbery!

I am so glad you were there to light their offending ass on fire. An apostasy of the most hideous degree! What is becoming of my beloved Italy? I’ll bet they have the gall to blame it on the tourists.

I wish I could have been beside you while your fiery beauty took apart their heresy!