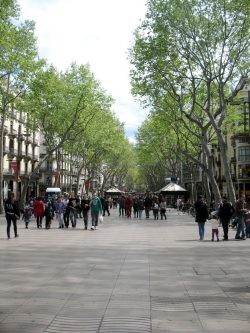 “Don’t bring a handbag or any nice jewellery!” My Mother said in her very serious voice. “Apparently They SLASH your handbag with knives and they don’t even CARE if they cut you!” she reinforced.
My Mother is very dramatic so I took this with a pinch of salt.  I rolled my eyes at her and gave her further stories little credence.
Hence, when I got on the plane to Barcelona, I did, indeed, have my handbag.
Upon arrival in Barcelona, a city I had been eagerly awaiting to visit, my Mother and I decided that we’d make our way to the hotel via train and metro.  I was rather amused as I walked through the airport to see a man with a placard, waiting for a person to collect from a flight.  The sign read “ Johnathon Stevens, “Tossa”  Poor Johnathon, I hope that made him smile too.
For 40 minutes we waited for the train to take us to the next step of the journey.  On we piled to a full and cramped carriage, where even the aisles were rammed with luggage and travellers.
“Watch your bag” said my Mother whilst trying to make sense of the map of Barcelona, her glasses on the end of her nose, as she tried to pronounce Spanish station stops.
All of a sudden a man produced a microphone and an accompanying sidekick with an accordion.  The train came alive with clapping and singing as the party train made its way along.  When the men had finished their singalong, one of them made his way down the obstacle course of an aisle to collect money for the show.
“Watch your bag” I said to my Mother as she fished for change.
When we disembarked from the train an hour later we headed for the metro.  Up steps and down steps we marched endlessly in search of our line, our battered suitcases humming along behind us and our bags clasped tightly to our sides.
Now, on this train, which was also full, sat 3 very pretty girls.  One was slightly older, maybe in her 30’s and reminded me a little of Boy George.  A few stops on, she suddenly stood up and yanked the two other girls from their seats with brute force.  One of the young girls went in the wrong direction so Boy George, grabbed her by the hair and pushed her off the train.  We all looked on aghast, mouths open but compelled to watch as she pushed the two girls against the wall.  I wondered whether we should intervene but looked on as she began to frisk the women forcefully.  Now when I say frisk, I don’t mean the gentle ‘feel up’ you get when going through airport security. OH NO.  She ripped off their belts, pulled up their tops, undid their jeans and rammed her hands down their pants.  I had to do a double take and check round to see if it was being filmed as some sort of porn show.  It was then that I noticed how many men had their legs crossed.
Unfortunately the show was curtailed by the train moving on and we will never know what happened next.
“Drugs?”  I suggested to my Mother as we chugged on.
“Pickpockets” she said “Watch your bag”
We arrived at our next stop and had to make our way to line 4 for the final part of our destination.  Line 4, though sign posted, was like trying to get to Brigadoon.
“Are you sure this line actually exists?” I grumbled as I climbed down yet another flight of steps.  On we trudged, weary and hot.  As I made it to the top of yet another flight of steps, panting and sweating and near giving up the fight for life, I turned to see a well dressed man, walking backwards up the steps,  holding one end of my Mothers case as she gripped the other.  Upon reaching the top, he gently put it down, smiled and went on his way.
“I thought he was going to steal my case!” she exclaimed “But how nice of him to help me”
We sat waiting for the next metro and I pointed out to my Mother that we’d been travelling on trains now for 2 hours 15 minutes.
“That’s longer than the bloody flight from England”  I said
“Yes, but look at the adventure we’ve had”  she enthused.  She had a point.
We eventually arrived at Bogatel where our hotel was situated.  I have to say that the word didn’t inspire me to be hopeful and whilst walking through the graffitied streets, along rows of what looked like crack dens, I began to feel a little edgy.
“Watch your bag” my Mother said. “There’s people in hoody’s”
We found the hotel but it didn’t have an entrance.  Marvelous.  We found a little black, graffitied door with a buzzer and my Mother decided to press it relentlessly until someone came to her aid.
“MOTHER! STOP!  That is NOT going to be the bloody entrance to a 4 star hotel!”
Eventually a tired and somewhat dishevelled chef opened the door. He told us we were on the wrong street and at the back of the hotel.
We walked round to the front and entered  a beautiful hotel that was a sight for sore eyes and feet.  We approached reception, gave our names and my Mother went to get her credit card to pay.
She unzipped her bag and said “My purse has gone.  I’ve been pick-pocketed”
To be continued…..

You’re back! – Johnathon Stevens, “Tossa”… yeah, I sure hope he had a sense of humor. Tossa de Mar is a charming little place, though. Barcelona is a city I have fond memories of as well as not-so-fond ones. I remember boldly walking all the way from the harbor to Park Guell. Don’t do it. Get on a bus or take a cab. I felt like a pilgrim who didn’t know when he would ever get there. Boy George would never do such a thing… and I’ve got my legs crossed, too. I guess the main idea here is: watch your bag! I sure hope the continuation of this story will reveal your Mom had put her credit card somewhere else…

Oh I’m with you on the pilgrimage! We walked from Sagrada Familia -to- the Ramblas-to the harbour-along and back up to Bogatel. Insane.
As for the credit card…all will be revealed!

Exactly, but did you know you’d be going on a serious pilgrimage when you started out, for I sure didn’t. I looked on my map and said, ‘Well, that doesn’t look very far to me…’

What!? Good god! I hope she was just having a mary poppins moment and had too much in her bag to find the purse quickly >.< *cross fingers* Need part two pleeeeeeeeeeeeeeeeease *suspence*

I’m hoping this is going to be an “all’s well that ends well” story… A 4-star hotel (front door) sounds lovely. Getting to the hotel? Interesting but exhausting. The “lost” purse? Not so good…
Enjoy Barcelona!

I assume you’ve made it back to England safely, so this isn’t going to be like Captain Scott’s journal. Maybe your mum needs what Americans call a “fanny pack” to keep her valuables safe.

Yes. I’ve always been rather alarmed at the phrase “fanny pack” however, in this instance, it would have been beneficial!

Sorry about the theft of your mom’s purse.
This post is cute and extremely funny. Poor Johnathon. Reminds me of “IT crowd” Peter Fille(Pedophile) episode.
Train episode with old lady(30 is geriatric?) and young girls does look like something similiar to classic “someone orderd a pizza?”
No wonder why all the gentlemen (and all their Johns would have risen up to greet the ladies) had to cross their leg 🙂

NO! 30 is young and vibrant! And she certainly didn’t take any prisoners, er, well, she kind of did and certainly entertained the John’s of the train.

Quite an adventure so far!

Somehow, I sense there’s a lot more to come though.

Oh yes. As with most of my trips. I’m never bored!

How could you have been robbed! Must have misplaced it.
Great story.

I know, not with ALL that bag watching!

Wow, sounds like an adventure. My Mother and her brother and sister were in Barcelona 2 months ago so your descriptions match theirs 🙂 Also, your trek up and down the Metro reminds me of every time I go to London and use the Tube to get from the Airport to my destination.

Yes, very similar to the tube. A great way to travel about and certainly full of interesting characters!

Bloody Hell! I’ve been to Barcelona twice and never has this much adventure. My abiding memory is sitting outside a bar in a little square under a huge tree covered in lights drinking Mojitos. Incredible place but full of beggars.

That sounds lovely! Oh if only I could say the same…

yikes. sorry about the gone purse and i must say it’s a lot of things for a first-parter! i’m just picturing it all now. i’ve always wanted to visit Barcelona, and i will one day, and will keep this in mind.
hope you’re well, Juliette.

Just keep your money down your knickers, actually, maybe not as Boy George had no qualms about going there! I’m very well thank you Jaya, hope you are too.

Your maths is diabolical Ken, though I get your point, it’s very draining.

Oh wow – Ugh, that is one of my biggest fears about travelling in strange places, but to be fair, I’m not overly cautious about it – i figure if it is going to happen it’ll happen.

Just hit the sangria Deirdre! Worked for me!