F is for Fancy Footwork 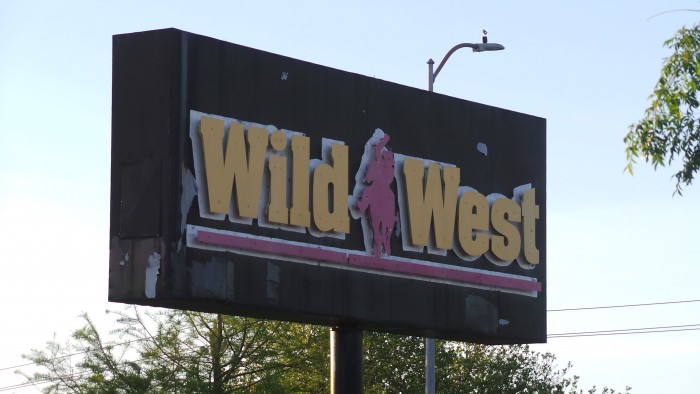 My fairy godmother took me to the ball. OH YES SIREE, SHE DID.

Off to the Wild West I went ready for a full on session of country dancing dressed in Levi’s , cowboy boots and the ubiquitous checked shirt. And red lippy. Always red lippy.

It started well because I made friends with the Croatian bar maid who soon got to understanding that I prefer my ice to replaced with vodka when it comes to my screwdrivers. It’s very important to establish good connection with the one who is pouring your drinks. Anyway, I was all agog at this big, countryfied place with dark wood, animal heads and a disco ball saddle and stirrups. I was terribly excited and all a bit of a tremble. This is the America I’ve been looking for.

“So what kind of dancing goes down here?” I asked my friend.

“Two step and polka,” she replied.

Now let me tell you that I am a bit of a dancing queen as it happens. I have gold medals in Ballroom, Latin American and Salsa. I don’t take anything on unless I’m going to be good at it. However, I have no flippin’ clue about the Two Step or Western Swing. I wasn’t really bothered until a man called Martin came up to me and said, “Would you care to dance, Miss?” in that accent that drawls down this end.

I laughed. Not on purpose but because:

1: I suddenly got the fear.
2: He asked me to dance in such an old fashioned, lovely way that I felt like I’d dropped into a movie scene.

“Sorry, didn’t mean to laugh. I’m happy to dance but I haven’t a clue what I’m doing so you’d better be a good leader, Mister.”

“Listen up lady, you’re gonna see some crap in here tonight, but not from me. I’ve taught more women to dance than anything else,” said Martin.

“And I’ve taught more men how to be humble than V&O’s, mate.”

“It’s my job to show you off and make you look pretty.”

“I don’t need a bloke to do that. That’s why I have hair straighteners and Mac makeup, petal.”

Martin started to tell me what to do. I started to follow lead and do as I’m told which you must understand is not in my nature.

“Look, my hips are connected to the top of my thighs. I’m a swinger, but not in the way you might be thinking,” I added quickly.

“Ok now look at me and look away and TURN- AGAIN – AND AGAIN. Don’t stop until I bring my hand down!”

Martin was proper bossy but fair play to the bloke, he got me two stepping like a natural even though I was a bit dizzy.

And thereafter they kept on coming. Let me introduce you to the interesting characters I met at my Houston Hoedown:

Tyler the civil engineer hit the floor like a liquid dream. I was mesmerised by this guy as he slinked his way across the floor making women look like graceful swans.

“But I can’t do it like that,” I said. “I’m not going to be able to dance like these country birds.”

“Sure you can,” he said. “Just walk with me along the floor. That’s it, follow me….” Honestly, I think the double screwdrivers were helping.

Back at the bar, a bit hot and all, Miss Croatia introduced me to Keith from England. Oh good! A fellow Brit who will understand my dilemma.

“Do you do this dancing stuff then, Keith?”

“Nah…just come for the beer. Been here ten months,” he said.

“You’ve been in this dance hall for ten months and still can’t bloody dance?!”

“In Texas, “ he said with a very British roll of the eyes. Mutual sarcastic understanding. Keith was my marker. Every time I came off the dance floor he’d say, “I think you’re getting better,” or “You’re blending in well now.”

A man sat on a stool at the edge of the dance floor laughing at me when someone was trying to make me spin in an array of various directions and I kept getting it wrong. Being judged from the sidelines isn’t funny so when I came off I asked him what he found so funny.

“Nothing funny at all. Just interesting to watch,” he said with a Spanish lilt.

“Well you aren’t from Texas,” I said.

“No. I am just passing through on my way to Louisiana. I’m a traveller. I’m from Brazil. My name is Massimo.”

Turns out that Massi, is also a psychologist.

“Studied people for three years, “ I told him.

“Oh do you practise?”

Now the good thing about Massimo is that being South American he could dance pretty much anything. Halfway through the night, the country music goes of for a few tracks and other music comes on.

CUE TIME TO OWN THE DANCE FLOOR! STEP ASIDE COWBOYS, AND LET ME SHOW YOU HOW IT”S REALLY DONE!

Massimo and I totally owned the super fast French Ceroc moves to the disbelief of the by-standing line dancers. Even Keith was blown away and he’s a Brit. As I walked off the floor, full of myself and my funky moves I felt ever so top swag and cool right up until I slipped in the wax that they put out for the bottom of your cowboy boots to make you slide. SLIDE? I nearly did the frikkin’ splits. I acted like it was part of the finale but don’t think anyone bought it. Even Miss Croatia had me a drink ready without asking.

Next to the bar sat a great throne where one can get your bewwwwwts shined. Upon said throne sat a wise, old cowboy by the name of Bill Forte. An ex paratrooper who was stationed in Southampton and Munich. Proper gent and a great guy. His nephew is Matt Forte, an NFL player who used to play for the Chicago Bears and now plays for The New York Jets. Lost on me. Talk to me about the Premiership.

And then we met Mark. Mark is a 7th generation Texan.

Mark writes insurance and tells stories. Oh and he certainly told a good few of them. Apparently he rode bulls in high school. At first I thought he was being derogatory about his past girlfriends in class but turns out he really did ride bulls. Like you do….

Mark’s Uncle used to be a sniper and therefore taught him to hunt deer in the dark.

Because of course, why make life easier for yourself and hunt them in the day when you can see them?

He also hunts wild boar on his 50 acres of land. He hunts them because they piss him off when they kill his deer.

“But surely that’s saving you the job?” I said. “You don’t need any guns or night vision, such is your want. Let the hogs do it and have a lie in.”

“Wanna bet?” Whoosh – straight over the head went that comment.

“I’ve got more guns than you even care to think about,” he said.

“I’ve got more notebooks than you can possibly imagine.”

“Here, let me tell you something funny,” he said. “What’s the longest 8 seconds?”

“Telling your wife her sister was better than hot!”

“It would take a Texan bird 8 seconds to respond to that?” I queried.

“Sure, honey. It would take her that long to think what to do.”

“And It would take me a nano second to drop kick you in the balls.”

My fairy godmother took me home before I turned into a squashed pumpkin.
See my video below to put faces to names. Enjoy.

And that’s just how it was! I lived the American, Country dream!

I tell ya what, put an intelligent guy in a checked shirt, jeans and a cowboy hat and I’m all of a dither and good for nothing. *)

Hah, Massimo looks like such a ladies man! I bet he made your hips swing, Jules! And Keith from England couldn’t look more the part than if he’d been cast in a spoof documentary! I’m wondering if the most memorable characters you meet over there won’t even be Texans!

To be honest, Mr. Gorilla Bananas, he was a very pleasant, no agenda type of guy just there to peruse and dance. Gentleman. Never judge a book by its cover, I say.

Yes – Keith was a typical Brit and I’m sure that you’re right in that they will stand out like sore bloody thumbs when I come across them!

I admire you for getting up and dancing 🙂 I have two left feet myself; sounds like a fun interesting time!

Hi Betty. Well I like dancing and it gets easier with more vodka – give it a go! 🙂 Thanks for the visit. 🙂

You are living the cowgirl dream!

Nearly but not quite, LL. For true authenticity I need to ride in the Colorado countryside and get in the back of a pick up truck. 🙂