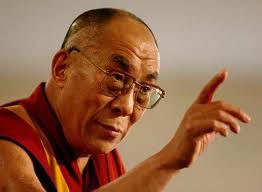 Dear Mr Lama…No, that doesn’t sound right.
Dear Dalai, your holiness.  I was wondering if you had the time to give me a bit of spiritual enlightenment?  The thing is, it’s happened again.  I didn’t lose it this time but nearly ruined it forever.  I’m talking of course, about my beloved iphone. My obvious and serious material attachment to this phone is more than apparent when I nearly lose or break it and fear my life will never be the same.  Apple have a lot to answer for – if this was a drug it would be banned!  This is where I’d like you to step in and help me out with my possessive and needy attachment to material items by remodelling myself into a better and more rounded person, through the knowledge of spiritualism and becoming one with nature…do you get my drift?  I’d also like you to help me to be a bit more tolerant and patient although I appreciate that could take time.  We can look at that another day.  Let me tell you what happened:
I bought a green plastic water spray bottle as a tool to use on my naughty dogs.  The idea is that I fill it with water and when my dog starts to snap at the other one I spray it with water and it stops.  Great.  So off I go to the woods with my dogs and my friend and her dog.  See! Im doing the nature bit, and I’m being a responsible dog owner.  The water spray was worse than useless – I could have spat further, not that I would ever do that of course. What I actually need is a massive, super soaker water gun in order to squirt with serious conviction.   So, on my return I left this water spray in the car tray (the bit where you can put a couple of cups of coffee and stuff)   However, I neglected to notice that said bottle had emptied itself into the tray compartment.  The next  day I  got into my car and dropped my phone in this tray AS I ALWAYS DO.  Still, I did not notice this water – unbelievable.  I stopped for petrol and when I came back to my car I saw my phone bobbing about in about 3 inches of water.  I nearly cried. It didn’t ring anymore, just buzzed but not so I could hear it because it thought that the headphones were being used, clearly because that particular hole was full of water.  I couldn’t hear anyone when they called and nor could I call them.  Thankfully, the game I play called ‘words with friends’ still worked!  I was so happy, I mean these are my friends I’ve known them for absolutely weeks.  Plus I’m certainly not forfeiting games that I’m winning! When I got home I tried drying it with a hairdryer.  I don’t think that was such a good idea as it began to glow white in the screen corners.  After 2 days it began to right itself and it is in pretty much good working order apart from one thing (because there is always one thing isn’t there…) and that’s it is not recognising any wireless internet.  Despite the fact that Wi-Fi is streaming about me like oxygen I can only connect to the rest of the world via 3G.  Now I’m a lot happier and I think I would be ready to learn some life lessons on possessions, so if you could get back to me I’d really appreciate it.  However, if there’s no phones allowed at ‘Camp Lama’ then I’m not coming!

You can add the Dalai Lama to your Facebook friends and receive his wisdom every day, and POST on his wall. Perhaps a link to your request will bring some wisdom in return??

I don’t even have an iPhone